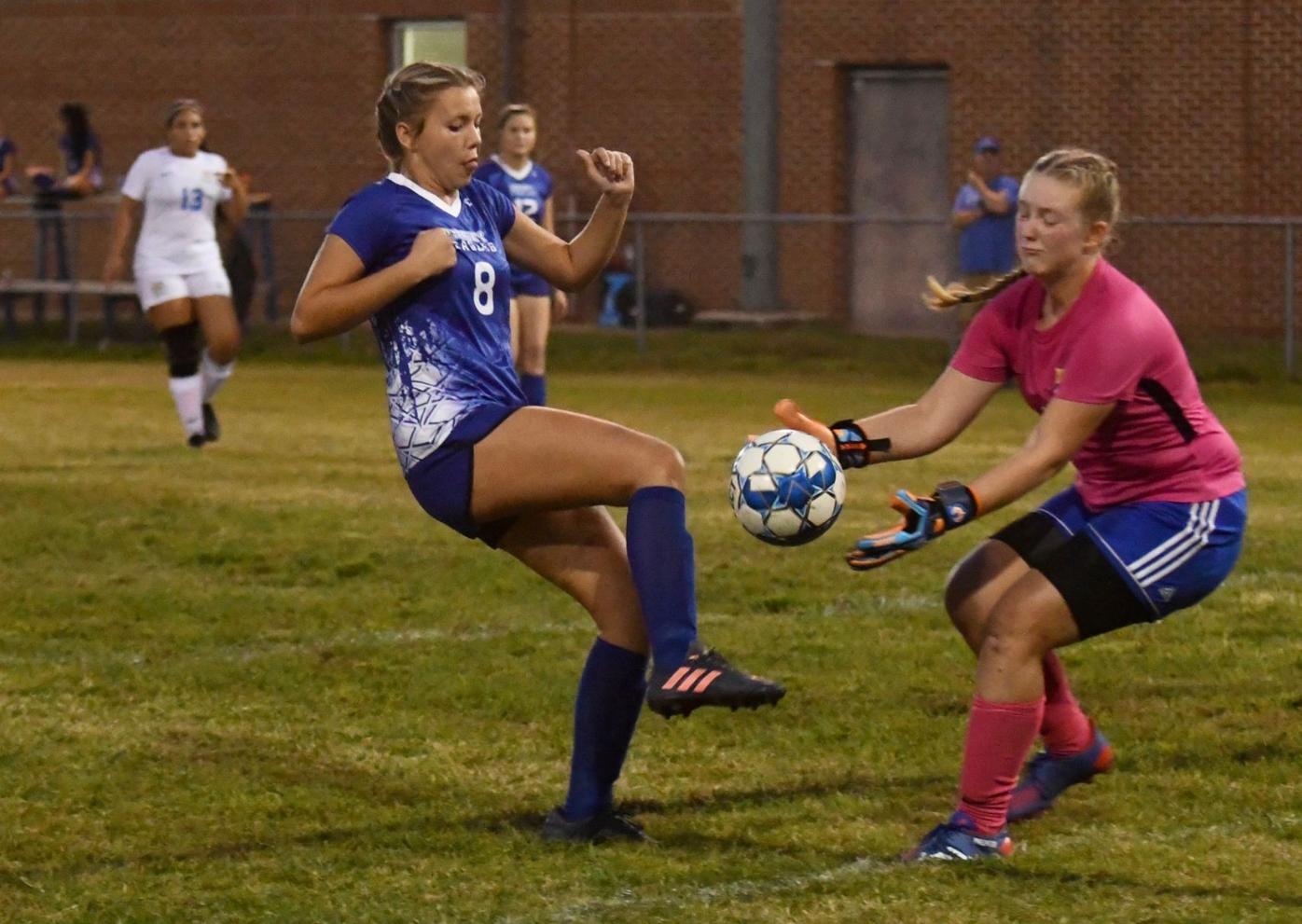 Cosby freshman Shylee Shelton (left) attempts to boot the ball past the Gatlinburg-Pittman goal keeper during Tuesday’s District 2-A semifinal at Cosby. 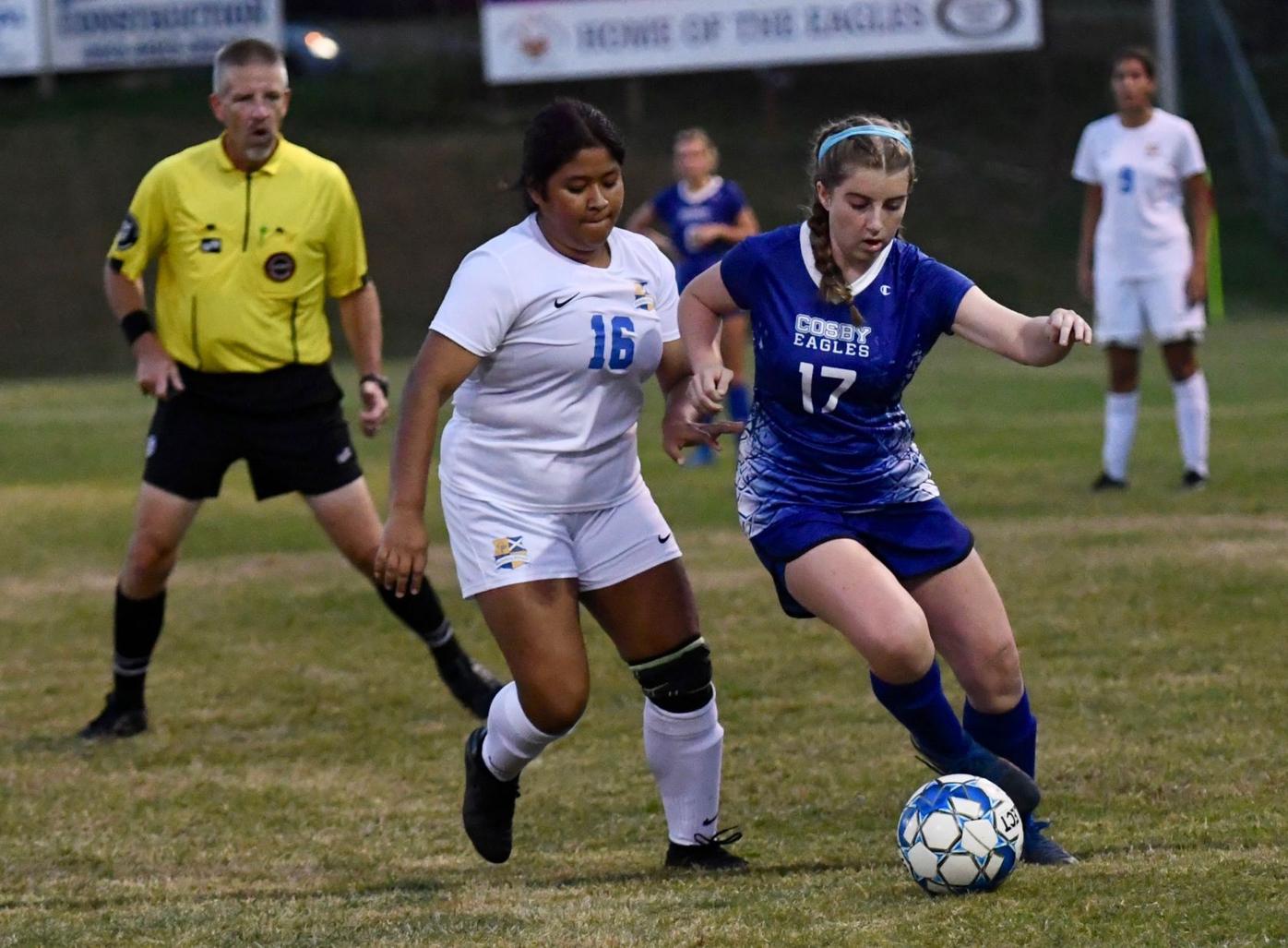 Cosby junior Kaymen Moss (right) pushes the ball up the pitch while defended by a Gatlinburg-Pittman defender in Tuesday’s District 2-A semifinal at Cosby. 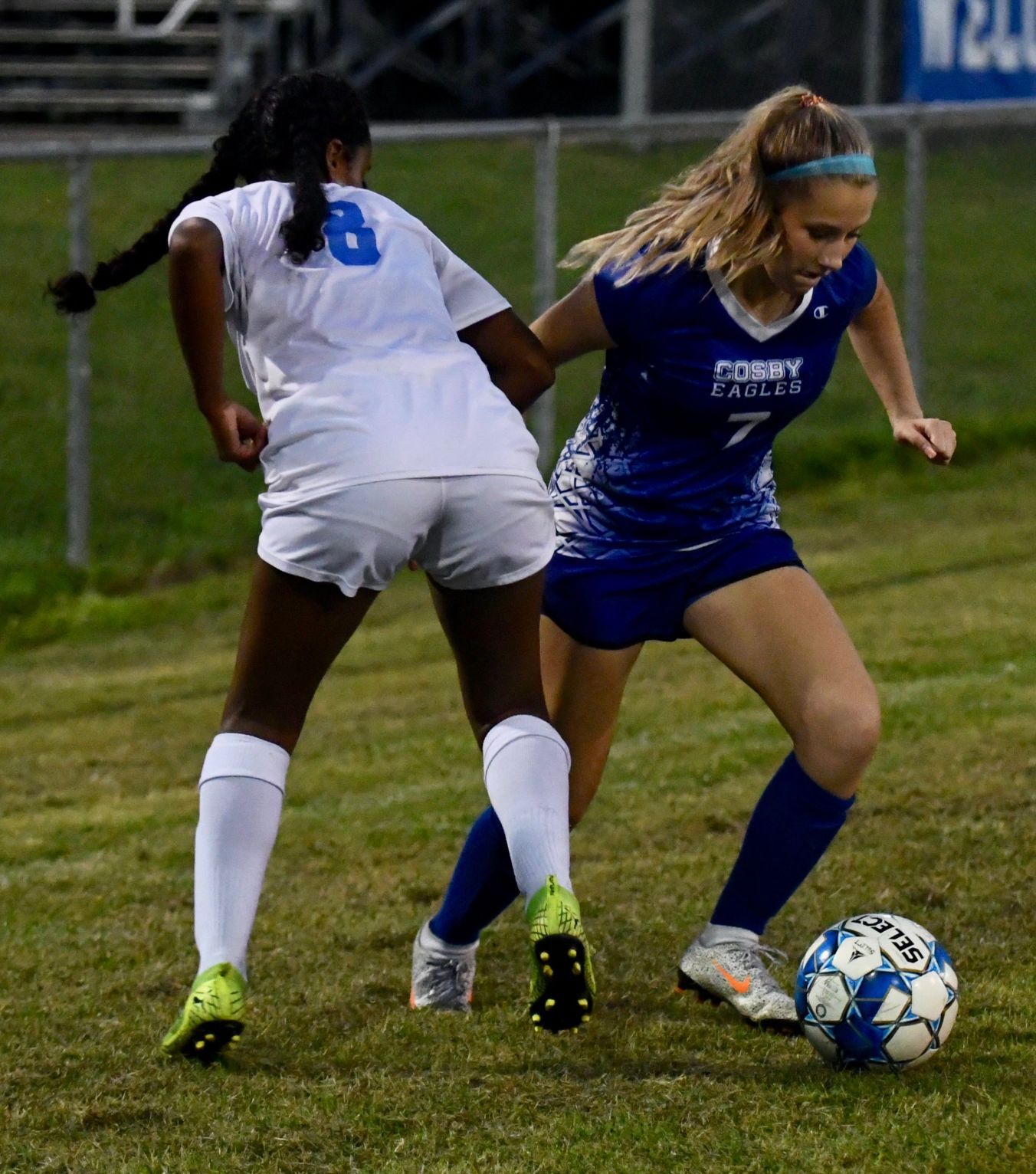 Cosby freshman Shylee Shelton (left) attempts to boot the ball past the Gatlinburg-Pittman goal keeper during Tuesday’s District 2-A semifinal at Cosby.

Cosby junior Kaymen Moss (right) pushes the ball up the pitch while defended by a Gatlinburg-Pittman defender in Tuesday’s District 2-A semifinal at Cosby.

The last four years have been the greatest it had ever seen, but with the last of the seniors graduating from that four-year run, this season was going to be a year full of unknowns.

Although the year ended in a 4-0 District 2-A Semifinal loss to the Gatlinburg-Pittman Lady Highlanders on Tuesday evening, that doesn’t begin to negate the progress the next generation of Lady Eagles made in 2021.

“I think we’ve exceeded any and all expectations this year,” Cosby coach Tim Moss said. “I give all of the credit for our successes this year to these girls. Their heart and teamwork is what brought them together and made them a solid team.

Cosby (4-8) still managed to finish second in the district this season, despite a near-complete overhaul of its lineup from a year ago.

Returners like Kaymen Moss, Karissa Norris, Allie Sheldon and Ava Carter led the program with their experience this season, but that didn’t mask the fact that 10 players on the roster were not only new, but had never played soccer.

With just three seniors making up the roster this season, the majority of the 2021 Lady Eagles are set to return for 2022.

“We had three seniors on this team, who will be missed, that came out for their first year this year,” Moss said. “Theoretically, everyone else comes back. That’s over half the team. I’m excited about next season, because now everyone will have at least one year of experience coming back with them and we can build off of this year.”

Tuesday’s tournament semifinal went scoreless through the first 17 minutes. As was the case for all four goals, Gatlinburg-Pittman got on the first with a breakaway score, taking advantage off a missed attack by Cosby.

The Lady Highlanders scored first in the 18th minute, and twice more in the 23rd and 33rd minutes to take a 3-0 lead into the half.

The second half was a markedly better effort out of the Lady Eagles from a defensive standpoint, but offensively it came with less opportunities to attack.

“We had a complete game, but spread out over two halves,” Moss said. “Our team leaders helped fix our first-half issues. I didn’t say much at the half, I left it up to them. I’m of the mindset that I’m only seeing the game from one perspective. They’re seeing it from all angles on the field.”

Coming into the match Moss had to shake up the lineup with one of his top forwards out. Chloe Hance, a freshman newcomer that’s been pivotal in the team’s run in 2021 was sidelined for Tuesday’s semifinal.

She and Addison Woods finished the season as the top-two goal scorers for the Lady Eagles.

“We had one starter out, so we had to change our formation some and re-tune the lineup,” Moss said. “It didn’t work out, and that’s on me. We had to try something different with a key starter out.”

With all things considered, this season was a stepping stone for Cosby.

Between a first-year head coach and several new players up and down the roster, 2021 stands the chance to serve as a year the team will look back on as the beginning of another special run 2-3 years from now.

“I want them to sit back and enjoy the accomplishments they achieved this year, because they’ve done a lot,” Moss said. “Moving forward to the offseason I just want them to stay invested and continue learning. Watch college soccer, look at videos online. Just keep progressing. I can’t wait for next year.”