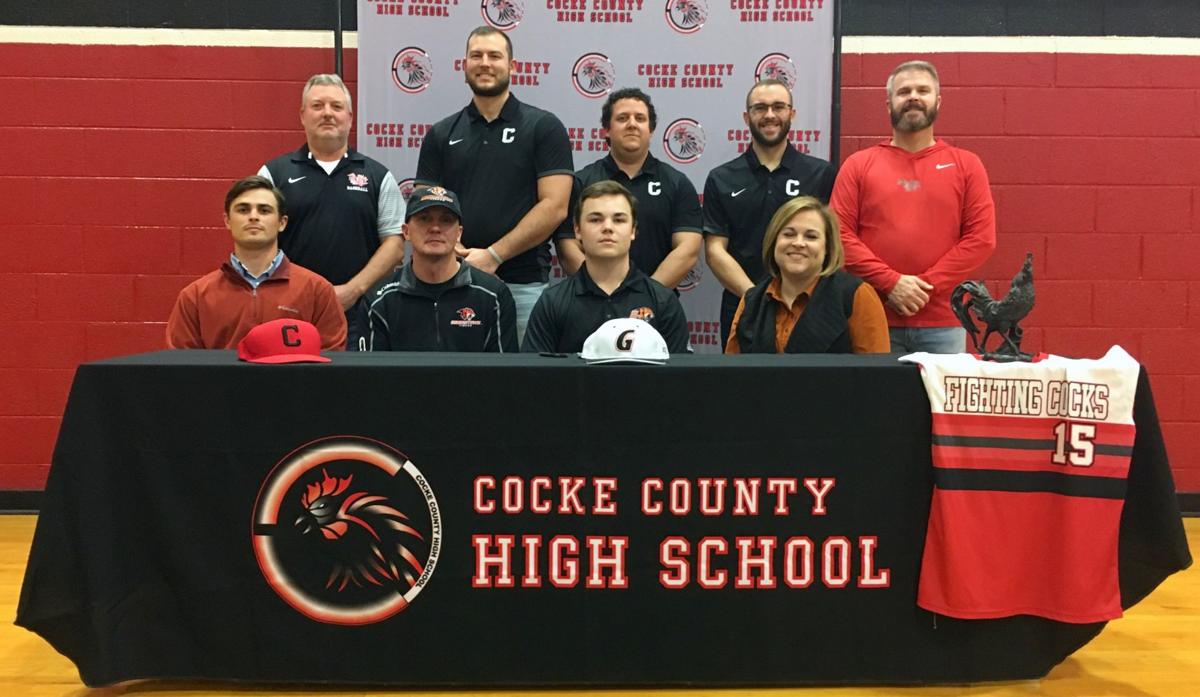 CCHS senior Bradyn Long (front-center) in joined by his family and coaches after signing with Georgetown College in Kentucky. 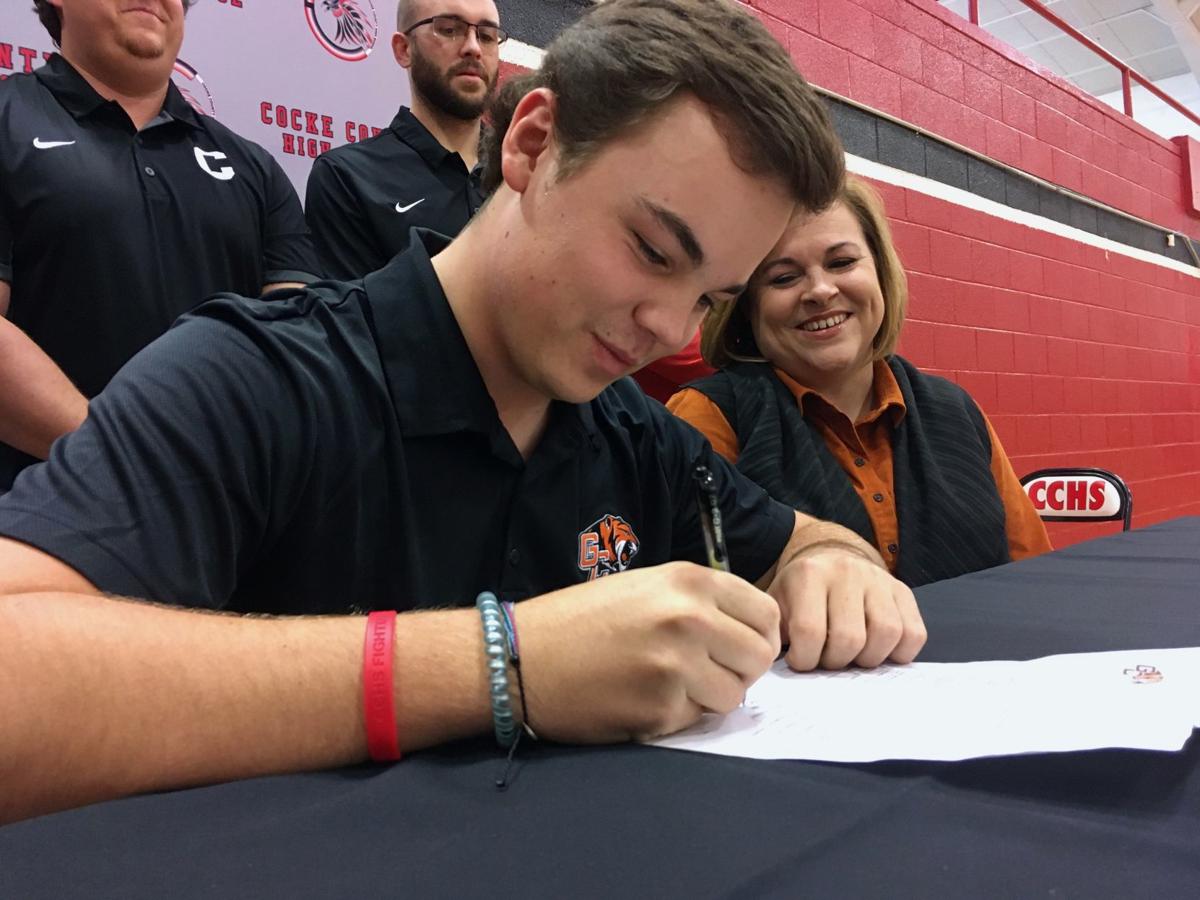 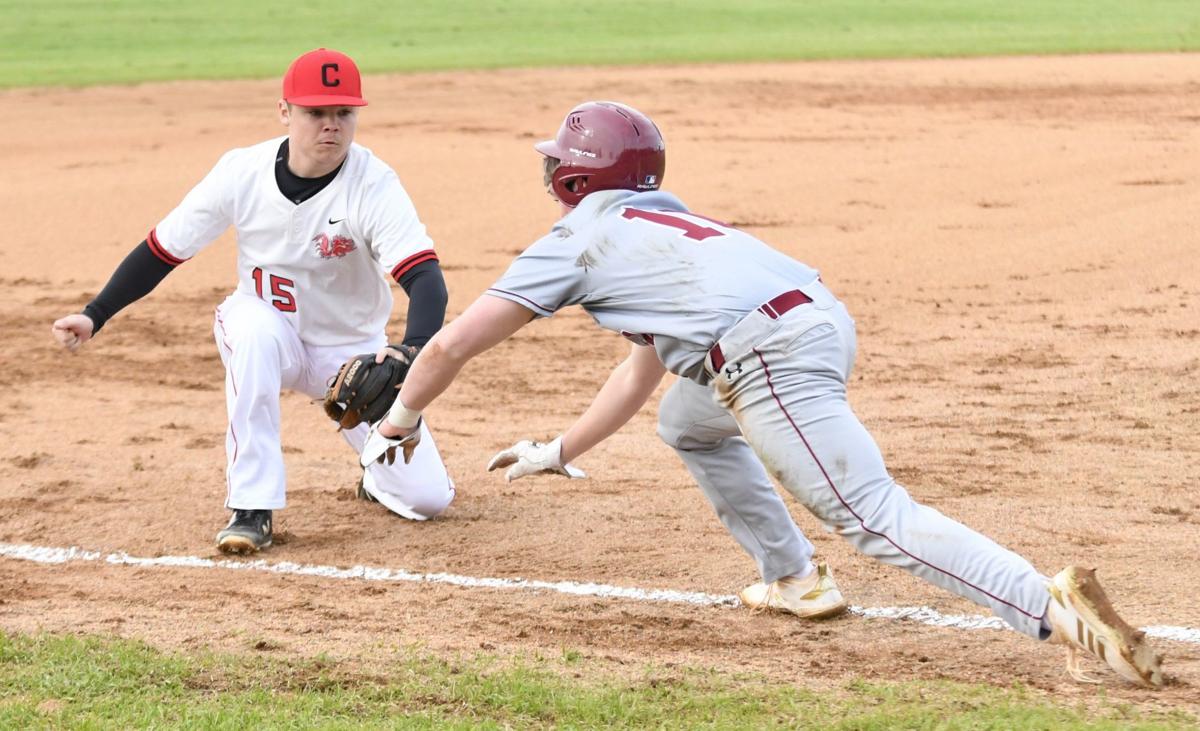 FILE — Cocke County’s Bradyn Long tags out a runner at third during a game against South Greene during his junior season. Long is signed to join NAIA league member Georgetown College in Kentucky next season.

CCHS senior Bradyn Long (front-center) in joined by his family and coaches after signing with Georgetown College in Kentucky.

FILE — Cocke County’s Bradyn Long tags out a runner at third during a game against South Greene during his junior season. Long is signed to join NAIA league member Georgetown College in Kentucky next season.

NEWPORT—Bradyn Long’s final season with the Cocke County High Fighting Cocks began yesterday, but his next destination is already in place.

The Big Red’s third baseman and pitcher will head off to Georgetown College in Georgetown, Kentucky after this season, as Long will get the chance to play at the collegiate level in 2021.

“This is the culmination of a lot of hard work Bradyn has put in,” CCHS coach Andy Chrisman said. “Not just on the field, but off the field. He’s a great young man that’s opened his own doors. I’m excited to see what he’s able to do with this opportunity.”

For Long, the opportunity to make his collegiate decision comes as a major benefit. Not only does he have a place to play next season, but no long has to worry about the recruiting process.

“Being able to go out and just play my senior season is a major benefit,” Long said. “No more having to worry about going to visits and talking to coaches. It’s like a weight has been lifted and now I can enjoy my final high school season with my teammates.”

Georgetown College is coming off a 45-win season that wrapped up in the NAIA Tournament a year ago. The program’s on-field success played a large role in landing Long, but in the end the academics had to be there as well.

“The academics stuck out a lot for me,” Long said. “They had programs I wanted to major in with engineering, and their baseball program has been top notch lately.

“I looked at a lot of places, but going up there on my visit it just felt like home to me.”

The senior transferred into the program at Cocke County during his freshman year at rival Jefferson County, and had to wait until his sophomore season to finally see the field.

Once he did, though, he was a natural fit. Chrisman saw enough potential in him early to put him on the varsity roster where he’s remained ever since.

“We love all of our guys, but it does mean a lot that he put his trust into us as coaches,” Chrisman said. “He was able to come here and play almost right away, and since that day he’s developed into not only a great player but a great human being.”

From that moment forward Long has become an invaluable asset to the team.

Not only is he one of the team’s better infield players, but has an arm that allows him to contribute in the pitching rotation. His versatility on the field helped propel him to such pivotal roles within the team, even as he’s continued his development into a team leader going into his final year with CCHS.

“He’s becoming more of a vocal leader, and that’s only going to help him moving forward,” Chrisman said. “Coming into the program he wasn’t too outspoken. Adding that vocal leadership to everything else he brings just makes him an even better athlete.”

"I looked at a lot of places, but going up there on my visit it just felt like home to me."