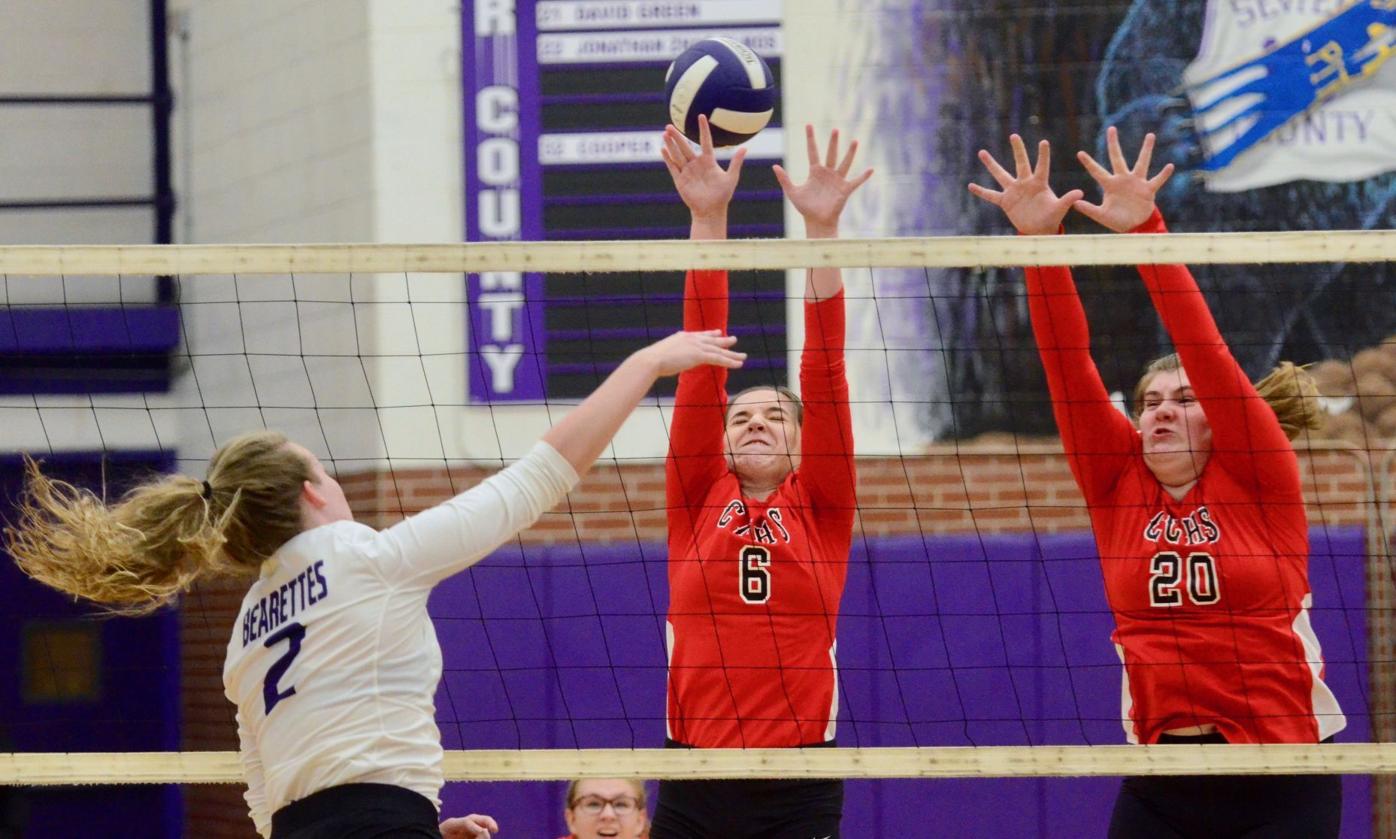 Cocke County seniors Maddie Williams (6) and Sarah Conard (20) rise to block the ball at the net on Monday at Sevier County. 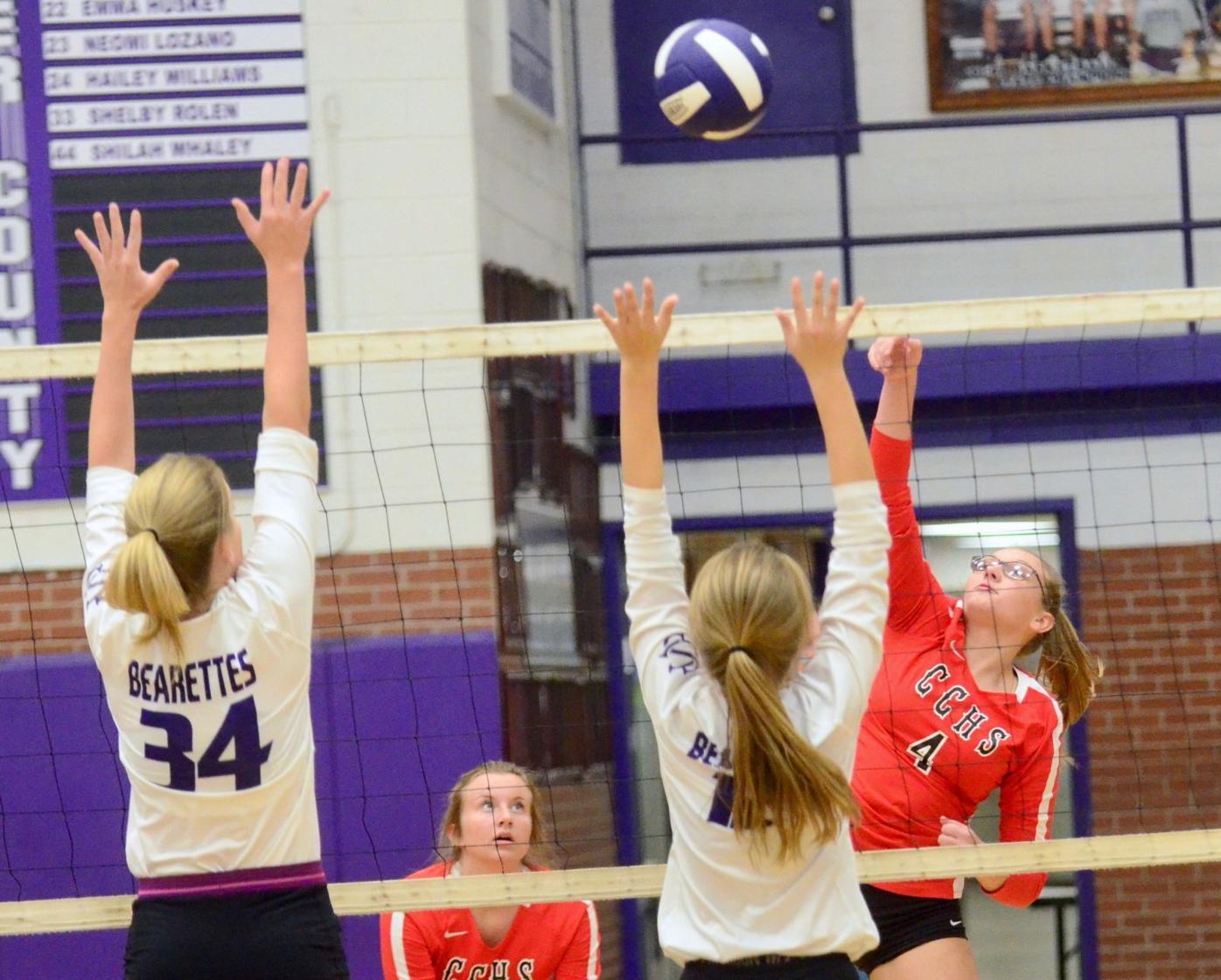 Lady Red senior Jensen Gregg (right) powers the ball over a pair of Sevier County defenders at the net on Monday. 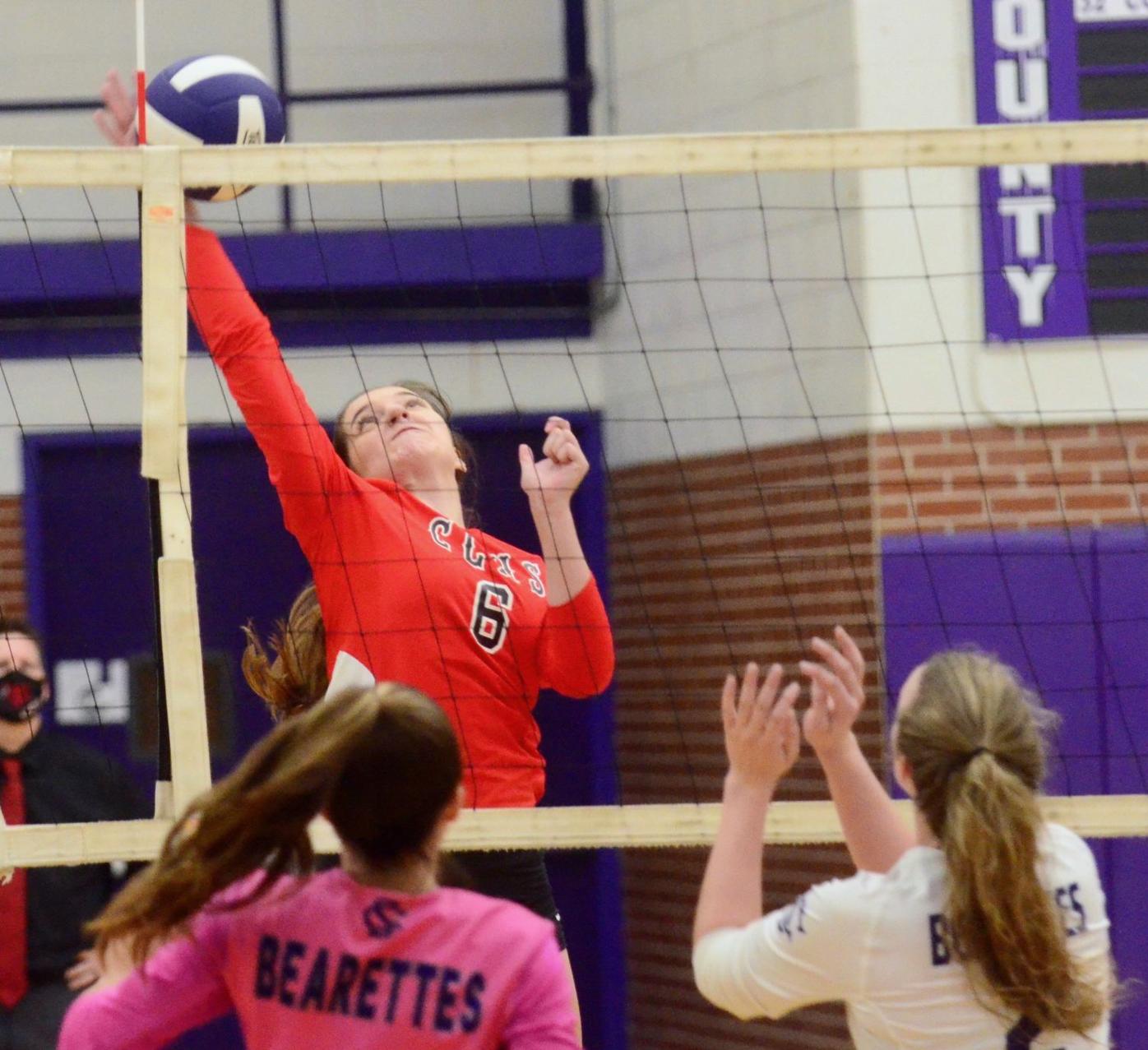 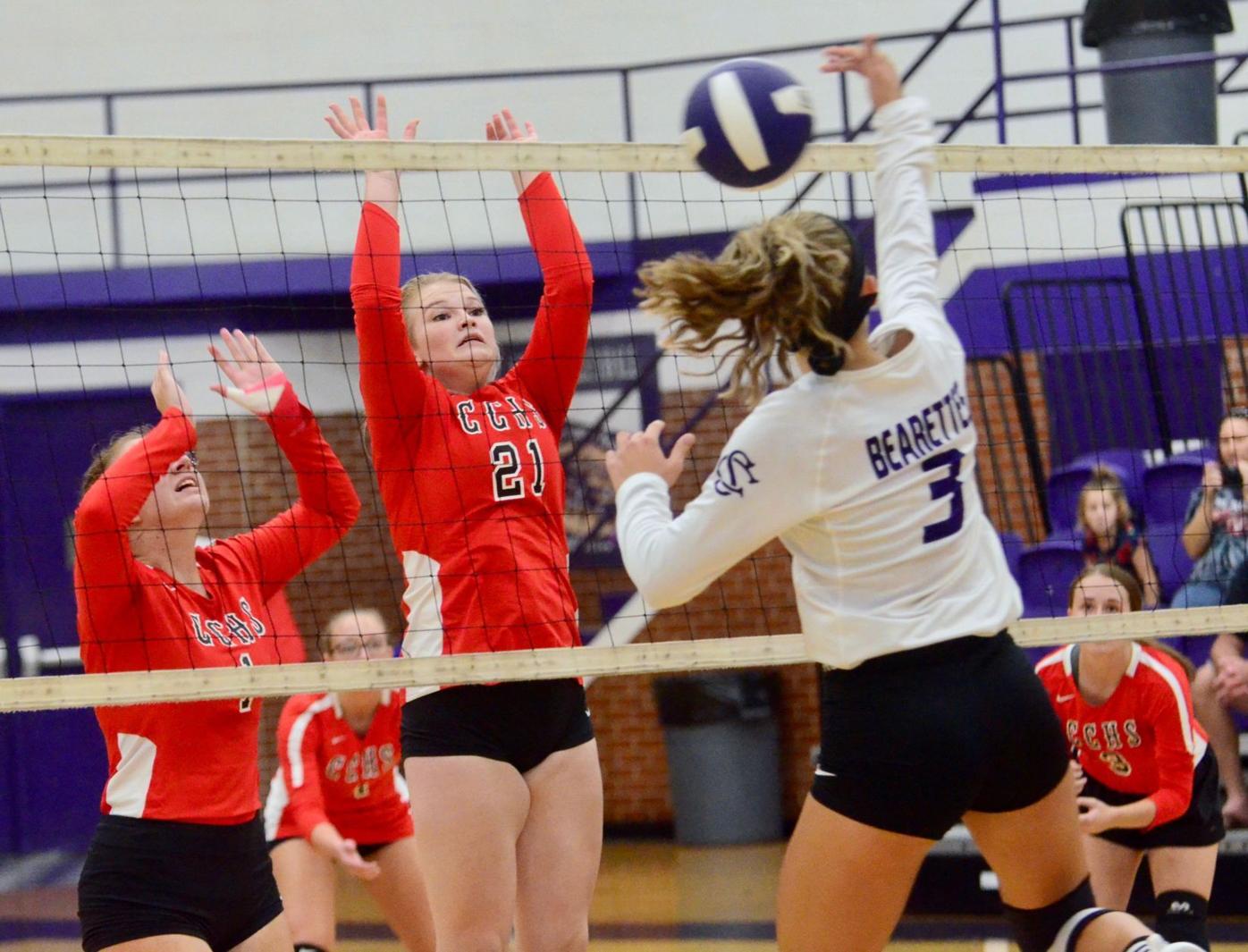 CCHS seniors Annie Wardroup (left) and Abigail Kirk (center) rise up at the net to block the ball in Monday’s matchup at Sevier County.

Cocke County seniors Maddie Williams (6) and Sarah Conard (20) rise to block the ball at the net on Monday at Sevier County.

Lady Red senior Jensen Gregg (right) powers the ball over a pair of Sevier County defenders at the net on Monday.

CCHS seniors Annie Wardroup (left) and Abigail Kirk (center) rise up at the net to block the ball in Monday’s matchup at Sevier County.

SEVIERVILLE—It’s been at least a decade since the Cocke County High volleyball program has seen a winning season.

With just two weeks left in the regular season, the Lady Red currently sit just few wins away from guaranteeing that streak doesn’t see another year.

“It would be easy for me to step back and take the credit for this, but our success has nothing to do with me,” CCHS coach Jamie Messer said. “I was blessed to inherit a team full of seniors that know what to do in every situation.”

In his first year with the program, Messer has seen Cocke County (10-4) sore to new heights.

The Lady Red’s success is due in large part to the quantity of seniors on the roster that have played at the varsity level since they were freshmen. That alone has made the program’s transition to its fourth new coach in the last seven years a seamless one.

“To have such a solid core of seniors to work around this year has been a God-send,” Messer said. “If not for them this may be a completely different season. Having their leadership, and underclassmen to be able to sponge off them is only going to make us better in the future.”

Abigail Kirk and Sarah Conard continued to dominate around the net, as Conard finished with six kills, while Kirk added another five in the victory.

Coming off a 12-win season, expectations were still high for the program in 2020. The Lady Red currently sit third in District 2-AAA, and have a chance to climb in the standings before the season ends.

Outside of league action on Monday, the Lady Red had to grind out a victory over former district foe, Sevier County.

After coming back to win the first set, CCHS dominated the second set and appeared well on their way to a win in straight sets in the third. However, Sevier County rallied from a small deficit to force the Lady Red to win it in four sets.

“It’s always nice to just play three and go home,” Messer said. “But we’ve got some tough district games left on our slate. So, grinding out some wins like this will just better prepare us for what’s to come. Finishing out district slate won’t be easy.”

The Lady Red fell behind early to start Monday’s match, in the opening set. Sevier County jumped ahead with an 8-5 advantage, and later built it into an 19-14 lead late in the set.

Hailey Williams led the Bearettes in the opening set with seven kills. She finished the night with 14 kills through all four sets played.

Four-straight points allowed the Lady Red to rally and get within one of the lead, but Sevier County did just enough to maintain its lead as the set entered its final stages.

Behind 24-22 and staring down the match point, CCHS was able to score four more unanswered, coming back to claim the opening set after a pair of kills by Conard for a 26-24 set win.

“It was crucial to get that set,” Messer said. “I felt if we had dropped that one it would’ve given Sevier County a lot of confidence, and could’ve led to a different outcome.”

The second set was much more relaxed for the Lady Red.

Although they traded points with the Bearettes to open the set, the Lady Red controlled the outcome by breaking an 11-all tie with a 13-0 run. Sevier County notched one final point on the board before CCHS finished the set with a 25-12 victory, giving it a 2-0 lead as the match aged into the third set.

Not ready to relent, the Bearettes made it a contest again with their fight in the third frame.

Cocke County’s largest lead was four, at a 21-17 margin late in the set, but it wasn’t enough to put Sevier County away.

After tying the set at 23-all, Alyssa Smith and Emma Huskey put the final touches on a 25-23 comeback win to keep the match going as it aged into a fourth set.

“(The Bearettes) were relentless,” Messer said. “They just didn’t go away. Toward the end of the second set we really began to come on, but by the third set our girls were just wore out.

“They never quit fighting, but you could just see in their face that they were wore out.”

Carrying momentum from the third set, the Bearettes jumped out to an early 8-3 lead in the fourth. Cocke County rallied, though. The Lady Red retook the lead at 10-9 after back-to-back kills from Jensen Gregg.

“Her hits were great tonight,” Messer said. “I felt like she gave our girls great energy, and that helped out a whole lot.”

Gregg’s play helped elevate CCHS in a moment it desperately needed it. She had five kills in the fourth set, as she finished the night with eight overall.

Both teams traded points over the next series of serves, but the Lady Red would get out to another four-point lead with a 20-16 advantage late in the set.

Sevier County would get back within two of the lead, but no closer. The Lady Red would go on to finish the set, and the match, with a 25-21 victory in the fourth, game-deciding set.