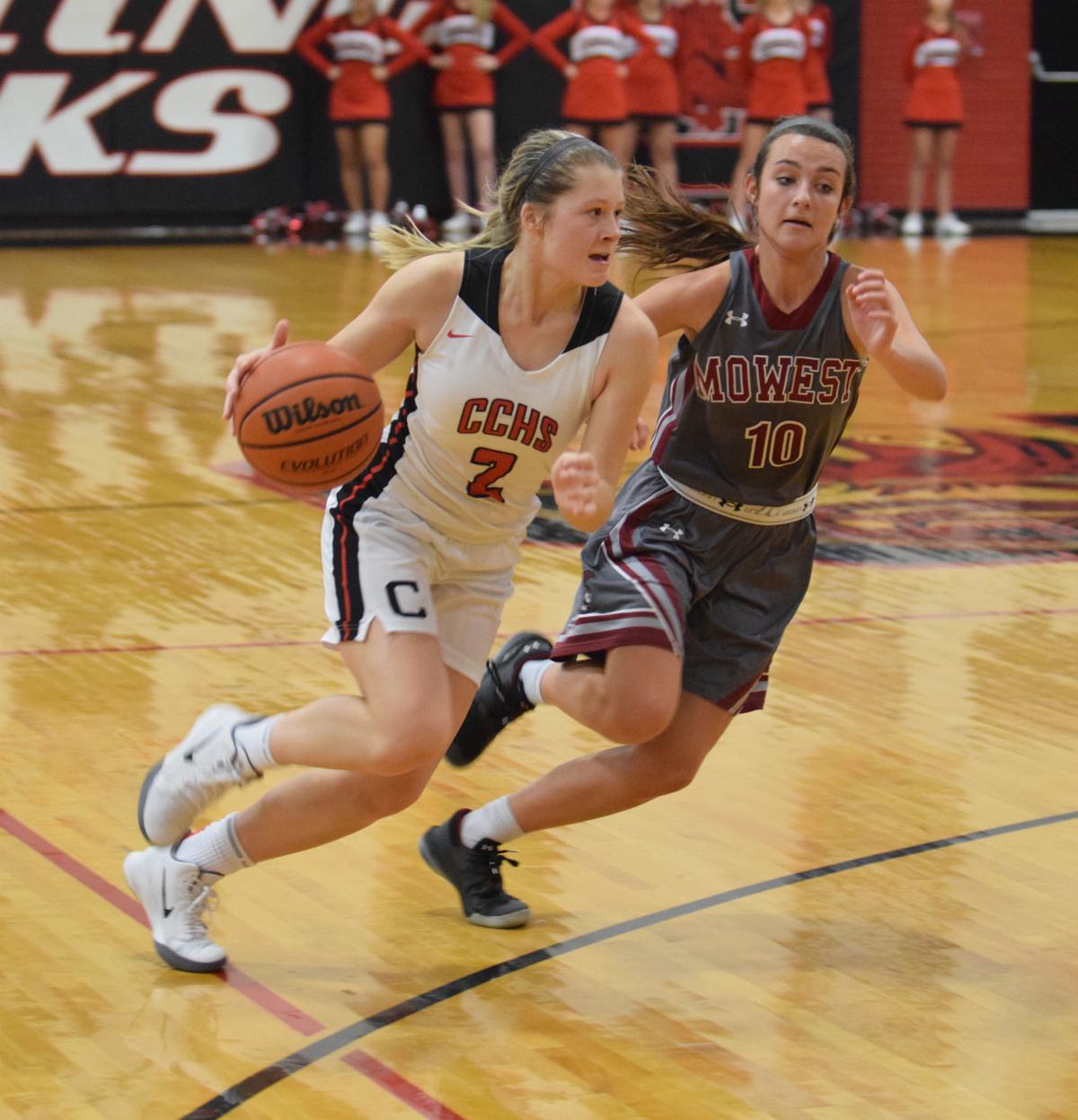 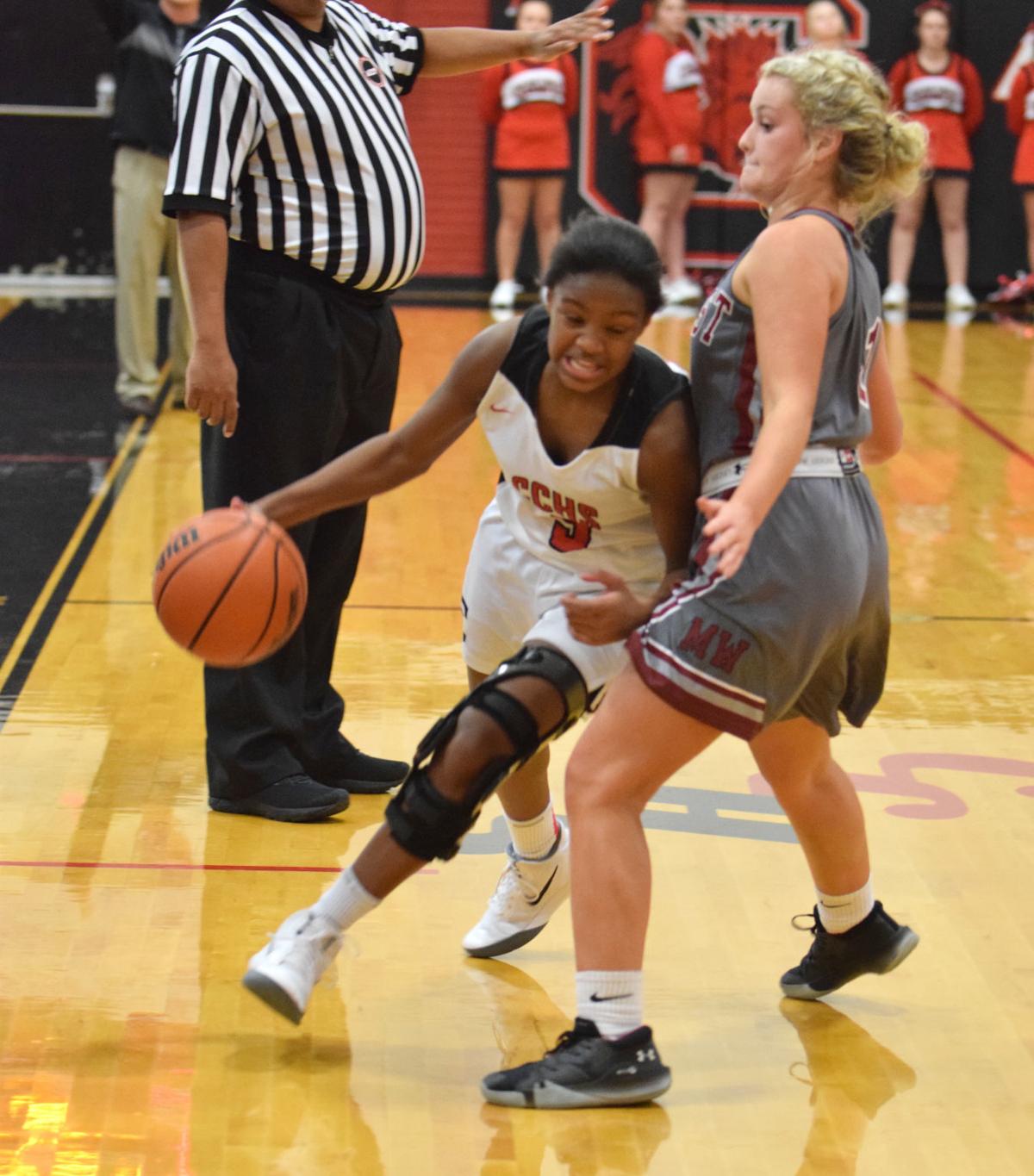 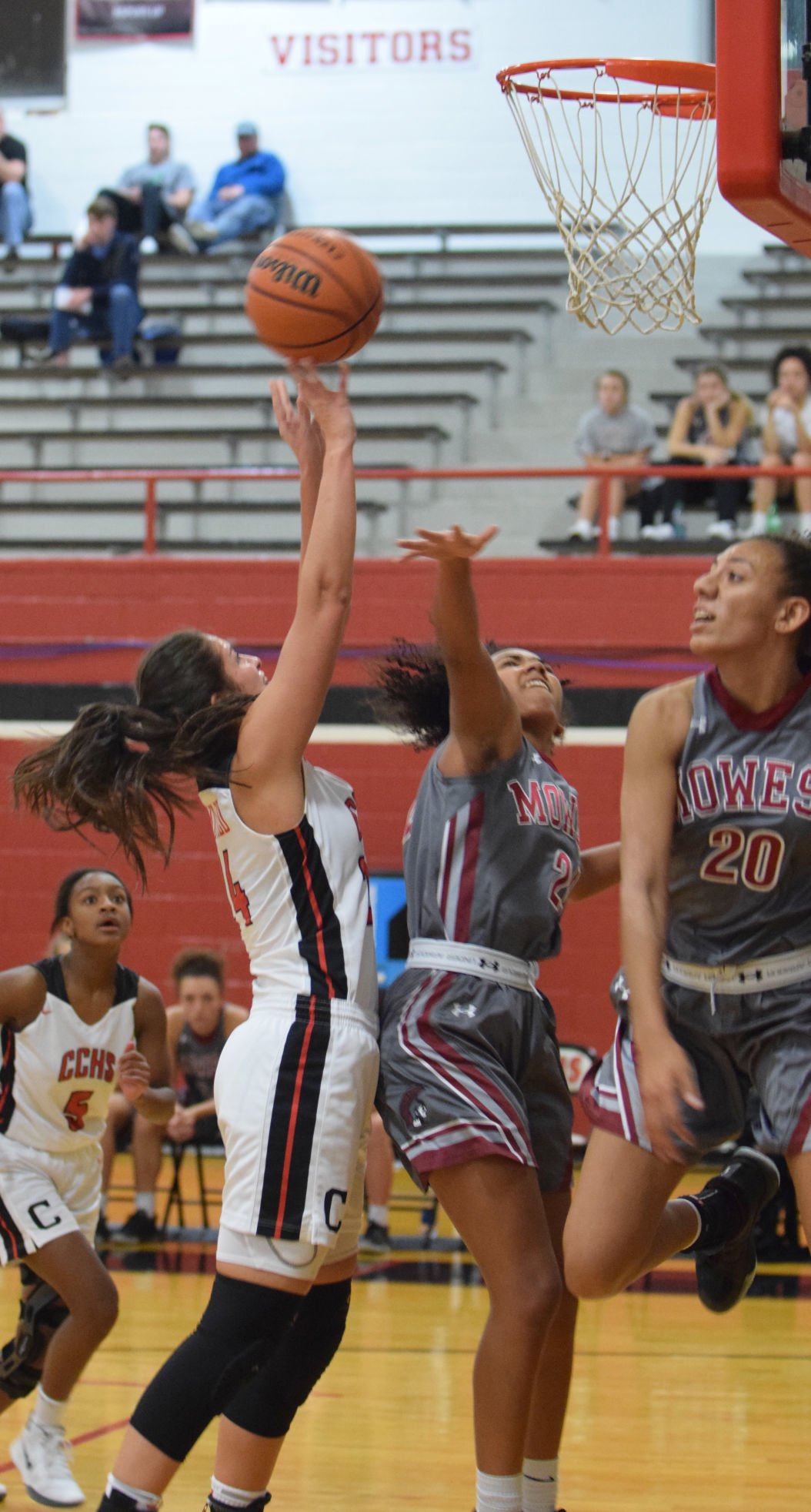 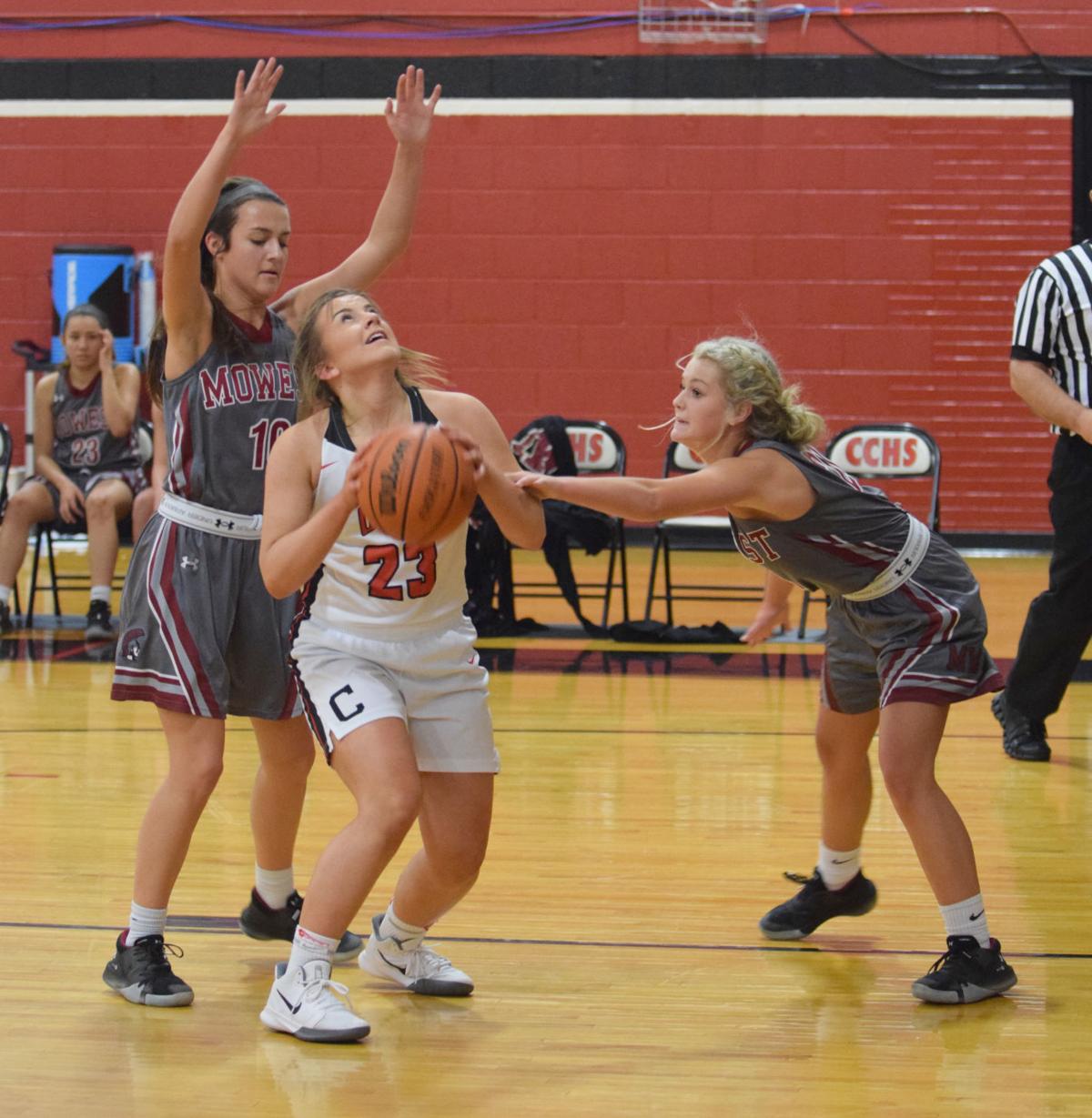 Lady Red sophomore Camryn Halcomb eyes the basket during the first half of Tuesday’s District 2-AAA win over Morristown West. 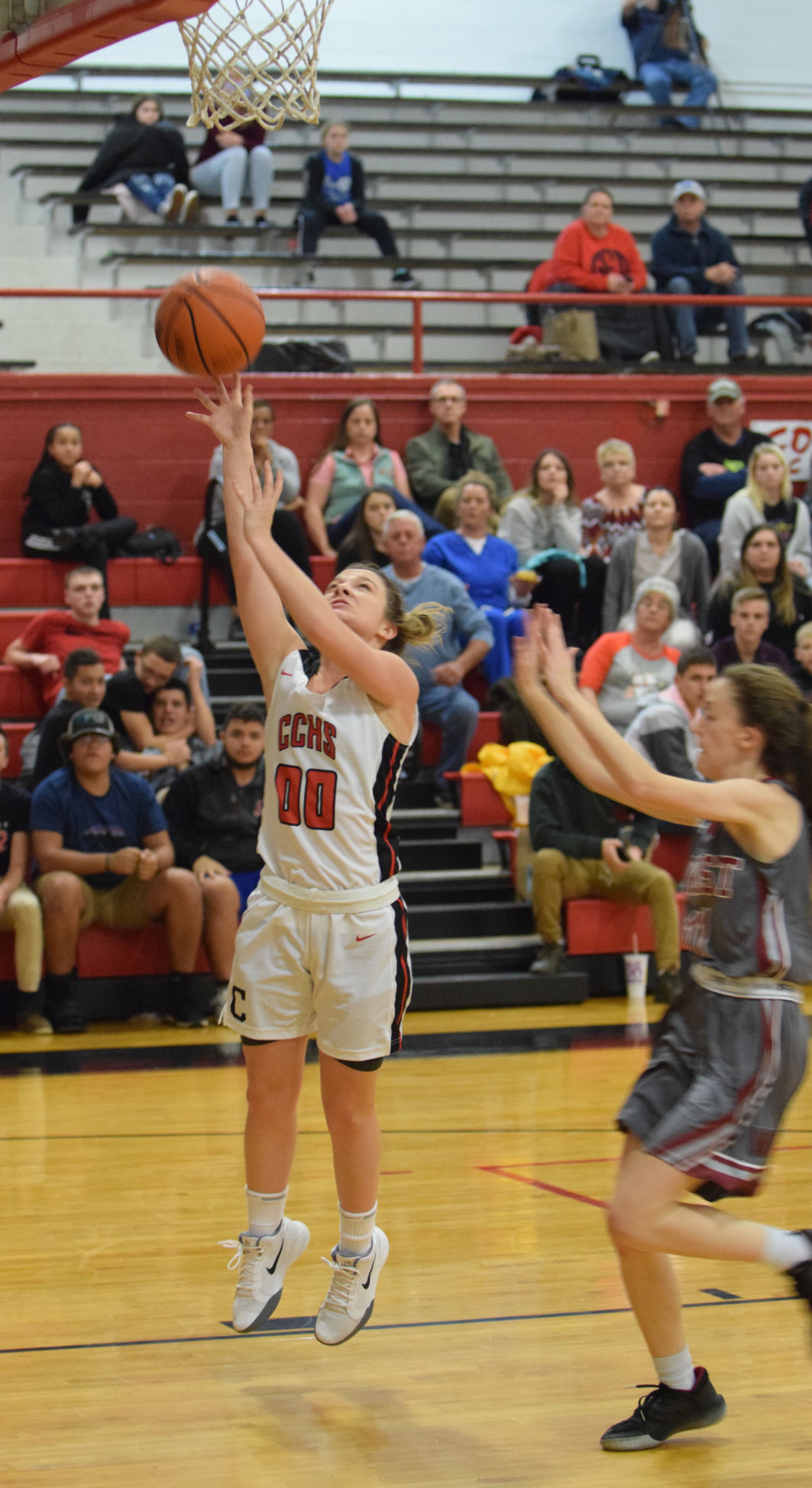 Lady Red sophomore Camryn Halcomb eyes the basket during the first half of Tuesday’s District 2-AAA win over Morristown West.

NEWPORT—Sitting in the locker room having gone scoreless the first half, Gracie Gregg came to a crucial realization — her team needed her.

Gregg didn’t stay scoreless for long when the second half began.

All but two of her points came in the third quarter as she helped Cocke County build a sizable lead and eventually take down Morristown West 41-28 at the Cocke Pit on Tuesday night, snapping a 12-game skid against the Lady Trojans since defeating them in the 2013 District 2-AAA championship game.

“I’m glad we finally beat them and I think this is a step toward the future and where we want to go,” Gregg stated. “I wasn’t pulling through for my team (in the first half), and I just pushed myself mentally to do that.”

Gregg sparked the Lady Red (6-3, 2-1 District 2-AAA) with five quick points to begin the third quarter, following her layup with three 3-pointers to finish the frame with 11 of her 13 points. Her final two triples occurred 32 seconds apart and opened up a 33-17 lead. She added two foul shots in the fourth quarter, which saw the Lady Red go 6-of-9 from the charity stripe while limiting West (5-2, 1-1) to just two field goals in the period.

Fellow sophomore Sydney Clevenger led all scorers as she poured in 17 points, having already accumulated 11 by halftime.

Although CCHS didn’t hit a field goal in the fourth quarter, Clevenger went 3-of-5 at the foul line to lead her team finish the game strong. She also ignited a 9-0 run in the third quarter with her 3-pointer after West had closed the gap to 24-17.

And when the final buzzer sounded, CCHS acted like anything but a team which had defeated an opponent for the first time in over six years as the Lady Red maintained a business-like demeanor.

“We worked really hard and I guess we were just really tired,” Clevenger said with a laugh, noting that only seven players saw game minutes for CCHS. “We just stayed on our game and pushed each other. I just think we were playing as a team and we were encouraging people, and that’s how we won the game.”

Just 30 seconds after converting a fast-break layup, Clevenger did so again through contact for an and-one to open a 15-6 Lady Red advantage. And her two free throws with 13 seconds on the second quarter clock sent Cocke County to the locker room with a 19-15 halftime lead.

Jaylen Cofield halted a 7-0 West run as she drove to the basket in the closing seconds of the third quarter, building a 35-24 CCHS lead going to the final stanza.

“I felt like we’ve been close for the past two or three years but we just didn’t have that edge that we had tonight, so I was really proud of my girls and the way they played the entire game. They were really coachable and it paid off,” CCHS coach Jeremy Byrd said after defeating West for the first time since his inaugural season at the helm.

The Lady Red responded with a 9-0 run after Hannah Seals tied the game at 6 with her straightaway 3-pointer.

Camryn Halcomb made the most of a second opportunity by driving to the basket with 10 seconds on the clock, giving CCHS an 8-6 lead after the opening frame.

Heavan Baxter, who finished with seven points, buried a floater from the baseline to open the second quarter before Clevenger’s transition layups.

West led only twice, coming at 2-0 on Kendall Mattison’s layup and 3-2 on a free throw by Aliycia Ewing.

Nina Lovelace and Lexie Howard each knocked down a 3-pointer to keep the Lady Trojans close in the second period.

Baxter slowed the rally on her drive to the rim to make it a 17-12 game, and Aviah Bunsic scored off her steal to pull West within 17-15.

Other than that, the Lady Red defense often limited West to one-shot possessions and never allowed the Lady Trojans to establish a rhythm.

“My philosophy is defend, defend, defend,” Byrd said. “We do a little drill where we work on zone defense and then boxing out and rebounding at the same time and they bought in. We were a little more disciplined tonight.”

CCHS steps outside conference play to host Gatlinburg-Pittman on Thursday before visiting Seymour on Friday, with both games set for 6 p.m. tips.

“I felt like we’ve been close for the past two or three years but we just didn’t have that edge that we had tonight, so I was really proud of my girls and the way they played the entire game.