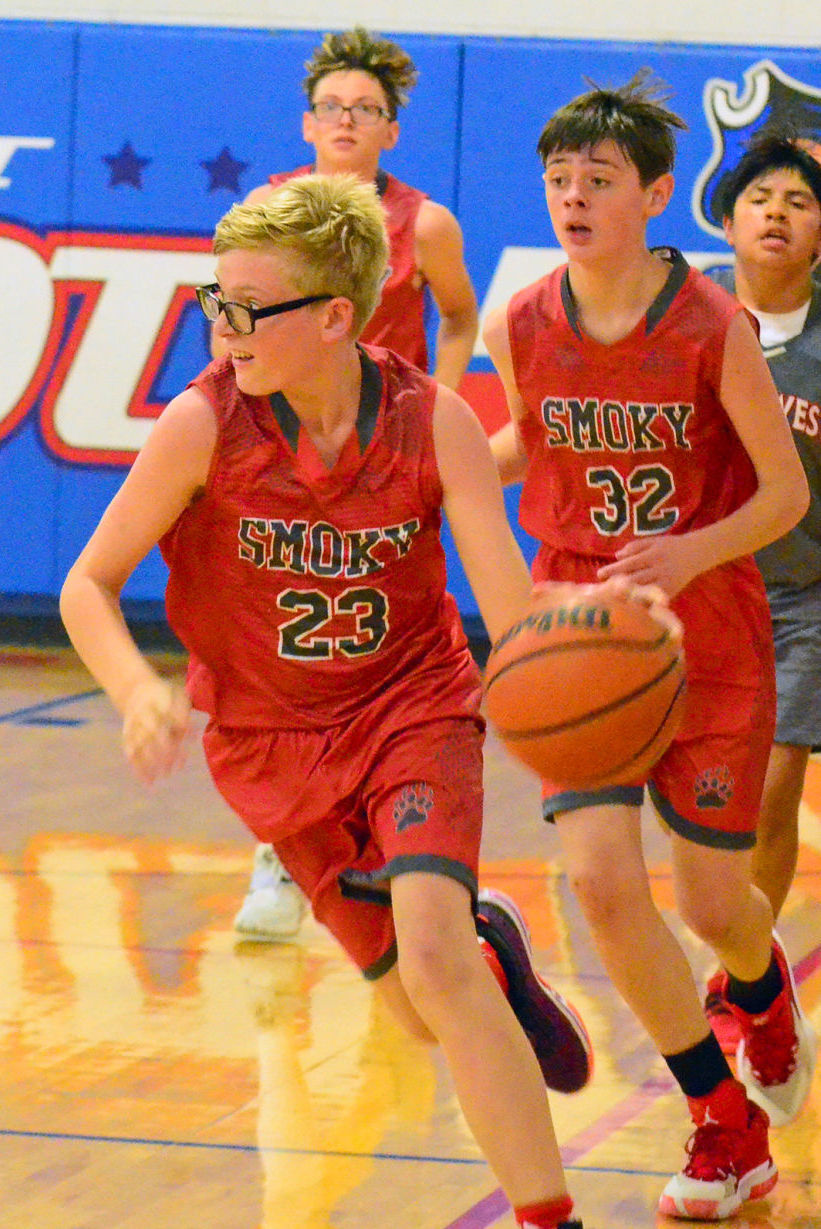 Ezra Spurgeon leads the team down the court in a recent elementary basketball game. Spurgeon helped lift Smoky Mountain to 41-20 victory over the Del Rio Trojans. 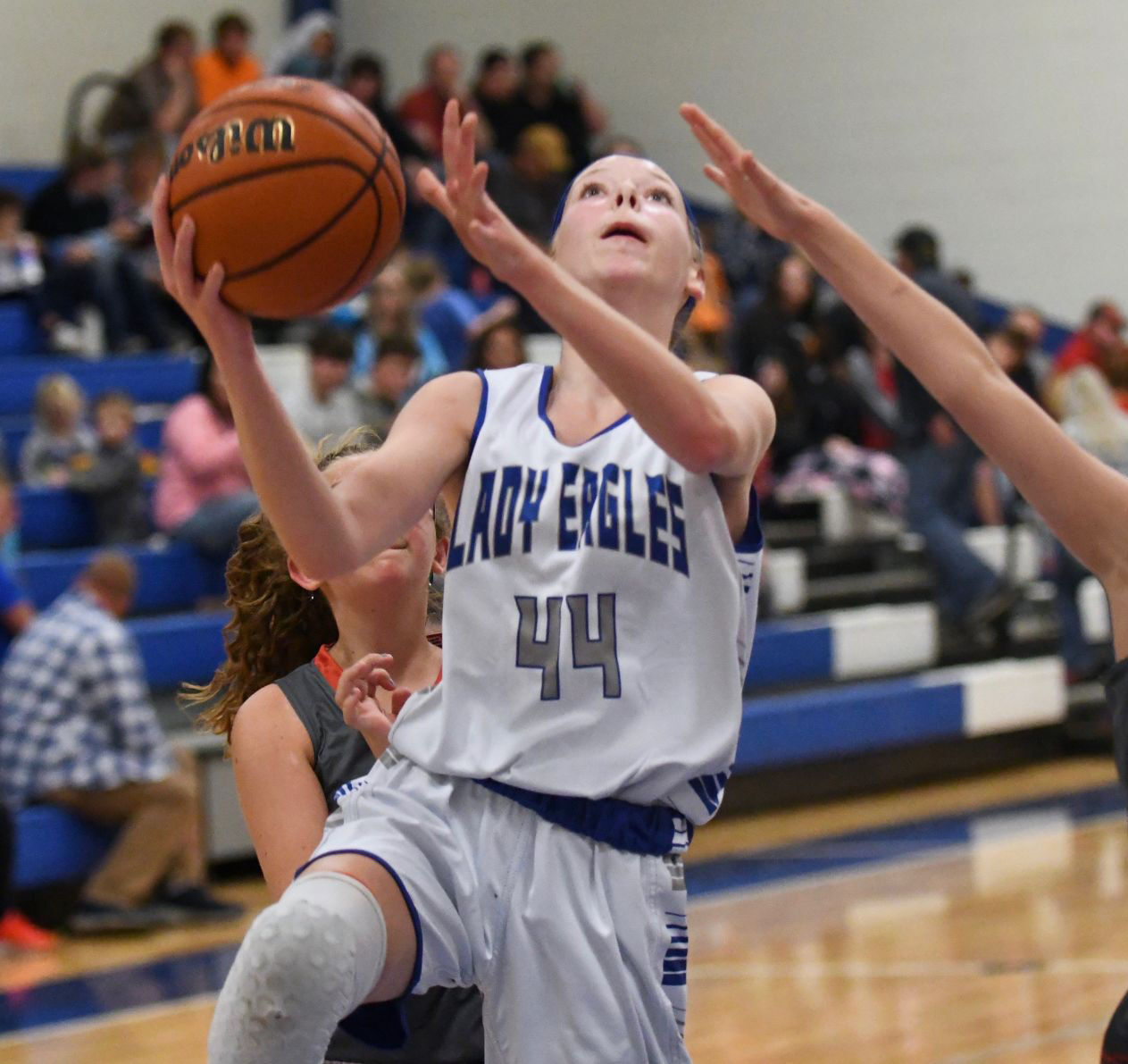 Allie Ottinger scored 14 points for the Lady Eagles in their matchup with the Lady Rockets of Bridgeport. Cosby fell just short in the game losing by a final score of 34-33.

Ezra Spurgeon leads the team down the court in a recent elementary basketball game. Spurgeon helped lift Smoky Mountain to 41-20 victory over the Del Rio Trojans.

Allie Ottinger scored 14 points for the Lady Eagles in their matchup with the Lady Rockets of Bridgeport. Cosby fell just short in the game losing by a final score of 34-33.

DEL RIO—Smoky Mountain traveled to Del Rio Monday evening to do battle with the Trojans. It was a true team effort that helped propel the Bears to a 41-20 victory.

Nine Smoky Mountain players recorded baskets in the win, which included a big first quarter from Ezra Spurgeon. The hot start from the Bears proved to be all they need to knock off the Trojans.

Spurgeon led the way in the first with eight points. Christian Walsh and Brody Stooksbury combined for 11 points to help the Bears take a 22-4 lead after the first quarter of play. Eli Sprouse was the top scorer for the Trojans and posted all four points in the opening frame.

Tyler Benson popped off to start the second quarter. He hit two 3-pointers in the period that saw the Bears score 13 points. Levi Reed, Daniel Reece and Johnnie Merkle chipped in baskets to give the Bears a 29 point lead.

The Del Rio comeback started after the half with Sprouse leading the charge. He would score seven points in the third quarter, which included his second 3-pointer of the game.

Del Rio outscored Smoky Mountain 8-4 in the third period. They would go on to post six points in the fourth quarter, but there comeback bid fell short as time expired.

Alyssa Susalla put the team on her back as the Lady Bears battled the Lady Trojans. She would go on to lead all scorers in the contest with 17 points.

A total of nine Lady Bears scored baskets in the game to give the team a blowout victory. Susalla scattered her baskets across all four quarters of play. Her most impressive quarter came in the second, when she would score eight points in the period. Her efforts would give the team a 25-2 lead at the half.

The Lady Trojans would go quietly in the second half as their offensive woes continued. Payton Mathes led the team with four of their seven points in the contest.

It was a real nail-biter between the Bridgeport Lady Rockets and Cosby Lady Eagles Thursday evening. Bridgeport pulled out the one point victory after trailing the entire first half of the game.

Six players total combined for all of the points scored in the contest. Cosby got out to a fast start in the game and claimed a 9-5 lead after the first quarter of play.

The Lady Rockets bounced back in the second thanks to the efforts of Kennadee Langford and Ava Wheeler. The duo would score 16 points each in the victory over Cosby.

At the half, Cosby’s lead had been trimmed to one up 18-17 over the Lady Rockets. The back and forth play would continue throughout the second half, and the Lady Rockets managed to take their first lead of the game after the third quarter. Heading into the final frame they were up 25-24 over the Lady Eagles. The two teams would equal one another’s point total in the fourth with nine, which enabled the Lady Rockets to narrowly escape with the one point victory.

The Grassy Fork Lady Ravens found success on the road Thursday evening as they traveled to Northwest to take on the Lady Patriots. It proved to be a stat stuffer game for the Lady Ravens as nine players recorded baskets in the game. They were lead in scoring by Ripley Groat with 9 points.

A strong first quarter is all that Grassy needed to overwhelm the Lady Patriots. They jumped out to a 17-2 lead thanks in part to two 3-pointers by Kate Raines.

They would follow that up with nine points in both the second and third quarters. Northwest had no real answer for the offense onslaught brought on by the Lady Ravens. The bright sport for the Lady Patriots was Hannah Smith, who scored six points for the team.

Grassy Fork managed to pull out a victory over the Patriots after facing a seven point deficit at the half. Grassy held a one point lead after the first period of play after Draiden Sneed hit two 3-pointers. Northwest’s Tyson Sutton matched Sneed’s total with six points of his own. It was 9-8 Grassy after the first.

Northwest’s shots started to find the bottom of the basket with more frequency in the second quarter. Benito Torres scored seven of his team high 11 points in the period to give Northwest a 22-15 lead at the break.

A strong second half performance from Cruz Coggins helped lift the Ravens to a win. Coggins would hit four 3-pointers in the half to help the Ravens outscore the Patriots 20-10 over the final two quarters.

The Lady Parrotts traveled to Gatlinburg Thursday evening to take on the Gatlinburg-Pittman Highlanders. The Clevenger twins showed up and showed out in the game combining to score 30 of the teams 38 points.

Parrottsville jumped out to an early 8-6 lead after the first quarter of play. The Highlanders clawed their way back into the contest in the second quarter. They would go to outscore the Lady Parrotts 10-6 in the period to take a 16-14 lead into the half.

The second quarter is when the Clevenger twins really put on a show. Brooklyn Clevenger kicked things off with a quick two point basket to set the tone for Parrottsville. She would also go 2-for-3 on free throws in the quarter. Her twin counterpart, Blakelyn, would also find success at the charity stripe. She would go 2-for-2 at the line and finish the quarter with a big 3-pointer.

The twin’s domination would continue in the fourth as they combined to score 12 of the team’s 15 points in the quarter to claim the victory.

Parrottsville squeaked by the Highlanders on Thursday to claim a victory in a non district matchup. It was an unusually slow start for the Parrotts as they could only produce seven points in the opening frame of the contest. The second quarter had a slightly better result as Waylon Fox found a groove in the period. He would score four points in the quarter on his way to eight for the game.

The Parrotts managed to claim a decent lead by the half at 17-9. Their struggles on offense would rear up once again in the third quarter. Scoring would become sporadic at best, as the Parrotts could only muster six points before the end of the frame. They held a 23-22 lead going into the fourth quarter of the game.

Fox would score four points in the period for the Parrotts and Eli Roberts and Vincent Steinbacher each added two in the closing minutes of the game. A missed 3-pointer by the Highlanders with 24 seconds left enabled Parrottsville to run out the clock and claim the win.