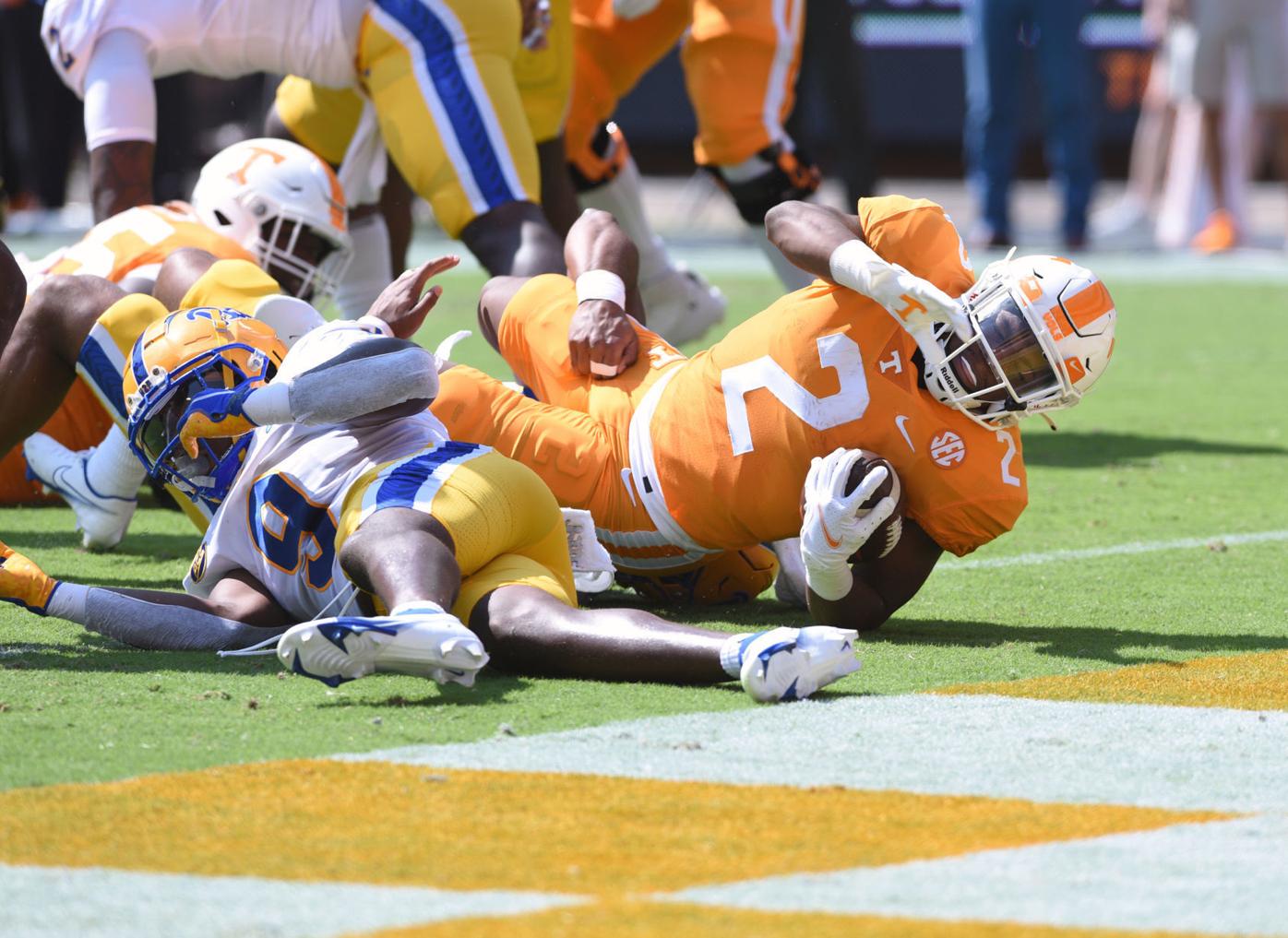 Jabari Small (2) punches into the end zone for the Vols’ first score of Saturday’s game. Tennessee came up short, losing the game 41-34 to visiting Pittsburgh. 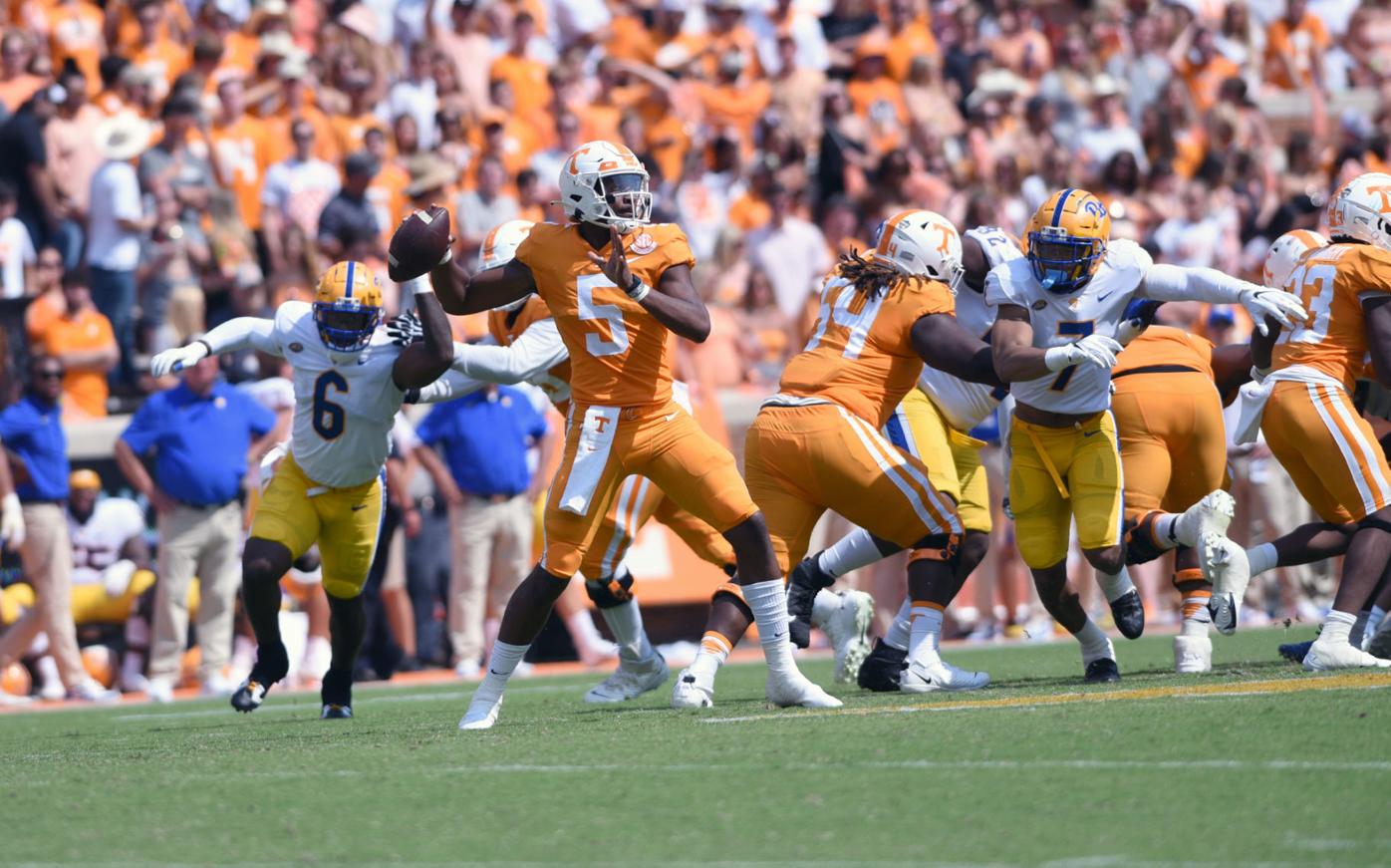 Hendon Hooker (5) gets a pass away against Pittsburgh before the Panthers rush can get to him during a non-conference game on Saturday at Neyland Stadium in Knoxville.

Jabari Small (2) punches into the end zone for the Vols’ first score of Saturday’s game. Tennessee came up short, losing the game 41-34 to visiting Pittsburgh.

Hendon Hooker (5) gets a pass away against Pittsburgh before the Panthers rush can get to him during a non-conference game on Saturday at Neyland Stadium in Knoxville.

KNOXVILLE—Tennessee’s loss to Pittsburgh on Saturday could have cost more than the final score, but crises may have been averted.

In the game, the Vols lost running back Jabari Small, quarterback Joe Milton and wide receiver Jalin Hyatt to injury and entering the contest, Tennessee was already without offensive lineman Cooper Mays and running back Tiyon Evans who suffered injuries prior to last Saturday.

Tennessee head coach Josh Heupel was asked about the status of those players during his Monday press conference ahead of the Vols’ Week 3 matchup with Tennessee Tech and provided some potentially positive news on Evans.

“Tiyon was moving around OK today,” Heupel said. “All of those guys, we’re going to find out more. It’s Monday morning. We’ll find out more before we get onto the practice field (Tuesday) as far as where all those guys are going to be. Obviously we’ve had a bunch of guys that have been nicked up. Just don’t have anything that’s for certain on those guys right now.”

Evans and Small combined for more than 230 rushing yards and three touchdowns in Tennessee’s season opener against Bowling Green on Sept. 4 and Small started in the 41-34 loss to Pittsburgh before leaving the game in the first half, leaving true freshman running back Jaylen Wright to get the most of the carries in the second half.

Wright ran for 15 yards and a touchdown while catching five passes for another 20 yards.

“(Wright) had to carry the bulk of it there in the second half,” Heupel said. “As a young player, he’s going to continue to get better every single week. (He) did some solid things in the protection game. At times, ran extremely well with his aiming points and being able to deliver. Got to continue to work on getting lower at the point of impact and finding a way to get plus-2 at the end of his runs, but a young guy that everybody in our program feels really good about.”

While the Vols ground game allowed for some optimism for the offense after their performance against Bowling Green and, at times, against Pitt, the injury to Milton leaves the biggest question mark going into the third week of the season.

Milton was 7-of-12 for 50 yards, but for the second-straight week missed on several deep passes with his receivers open that could have been the difference in a game decided by seven points.

He left in the third quarter after taking a sack that he subsequently fumbled on. Following the game, Heupel told reporters that Milton was injured and could not return to the game.

Backup quarterback and Virginia Tech transfer Hendon Hooker nearly led Tennessee back after a slow start. He finished 15-of-21 for 188 yards and two touchdowns, but a late interception on what ended up as the Vols final drive of the game ended any chance of tying it in the final minutes. He also had a fumble that was recovered by the Panthers on one of his early drives.

“I thought Hendon did a lot of really good things,” Heupel said. “It’s tough being a backup, because you don’t get the same amount of reps. You don’t know when your time’s going to be called.

“I thought he answered the bell with a lot of positive things during the course of play. Obviously got to do a better job of taking care of the football.”

Heupel isn’t naming Hooker the starter for the Tennessee Tech game, however. Instead, Milton’s injury status will likely determine who takes first team reps on Saturday, but as of Monday, that has yet to be determined.

“We’ll find out where he’s at during the course of the week,” Heupel said. “So there’s multiple factors that play into who the guy is that’s going to be taking the (first) snaps.”

Defensively, Tennessee will have one of its top offseason transfer additions back in the fold in Byron Young.

Young missed the first two games due to an NCAA eligibility issue, but according to Heupel, that issue has been resolved and the highly-touted linebacker is now available.

“Byron will be able to play this week,” Heupel said. “It was a two-week (situation), I guess, being ruled ineligible by the NCAA. A guy that’s grown a bunch in our program. He’s added 25, 30 pounds to his frame from when I first arrived here in late January, early February with our strength staff.

“Through training camp, through spring ball, (He’s) been really good as a pass-rusher off the edge. (I) think he’s going to add some things that we need on that side of the football.”