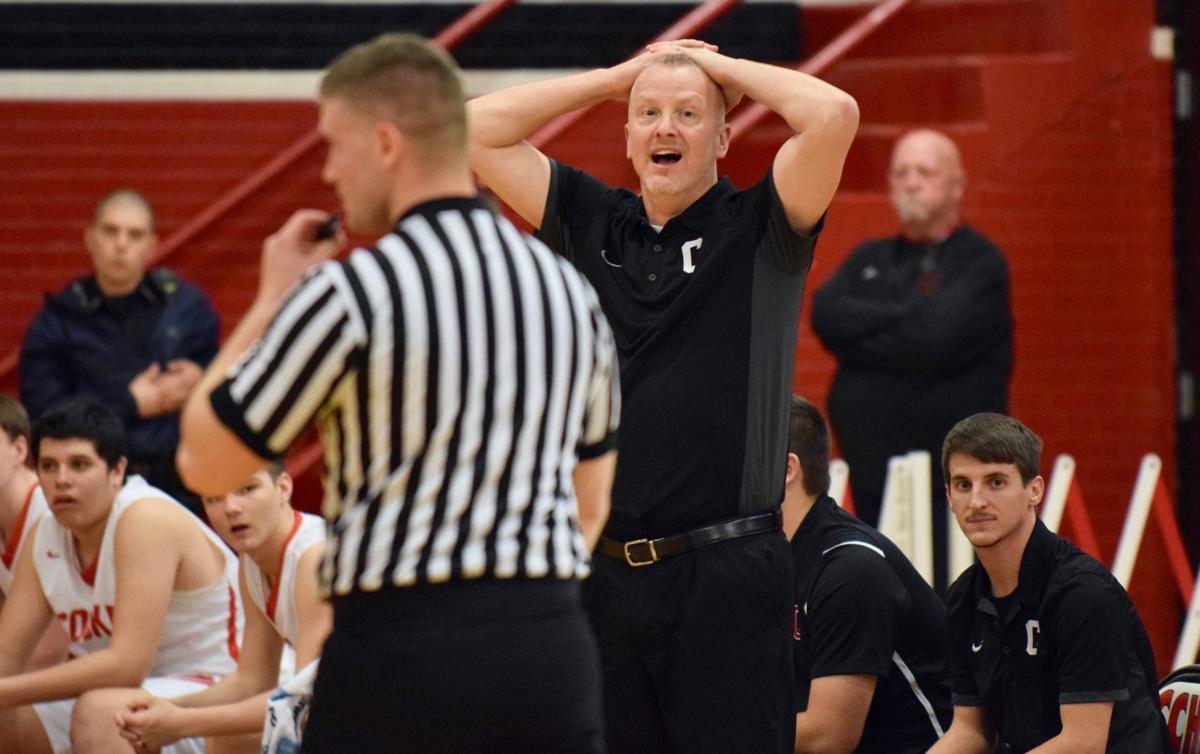 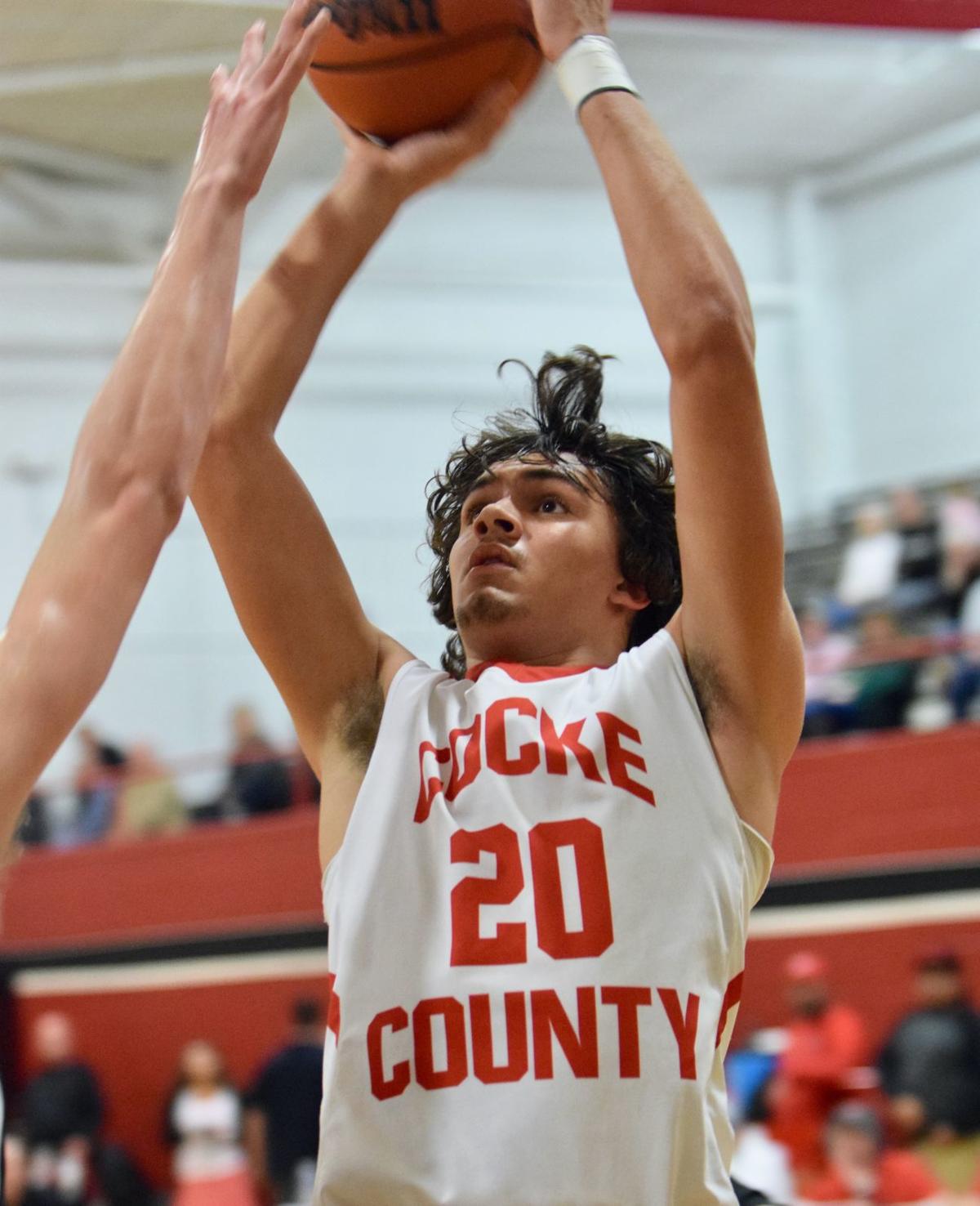 Cocke County junior Keaston Jackson goes up for a shot in the paint during Friday night’s matchup with Morristown East. 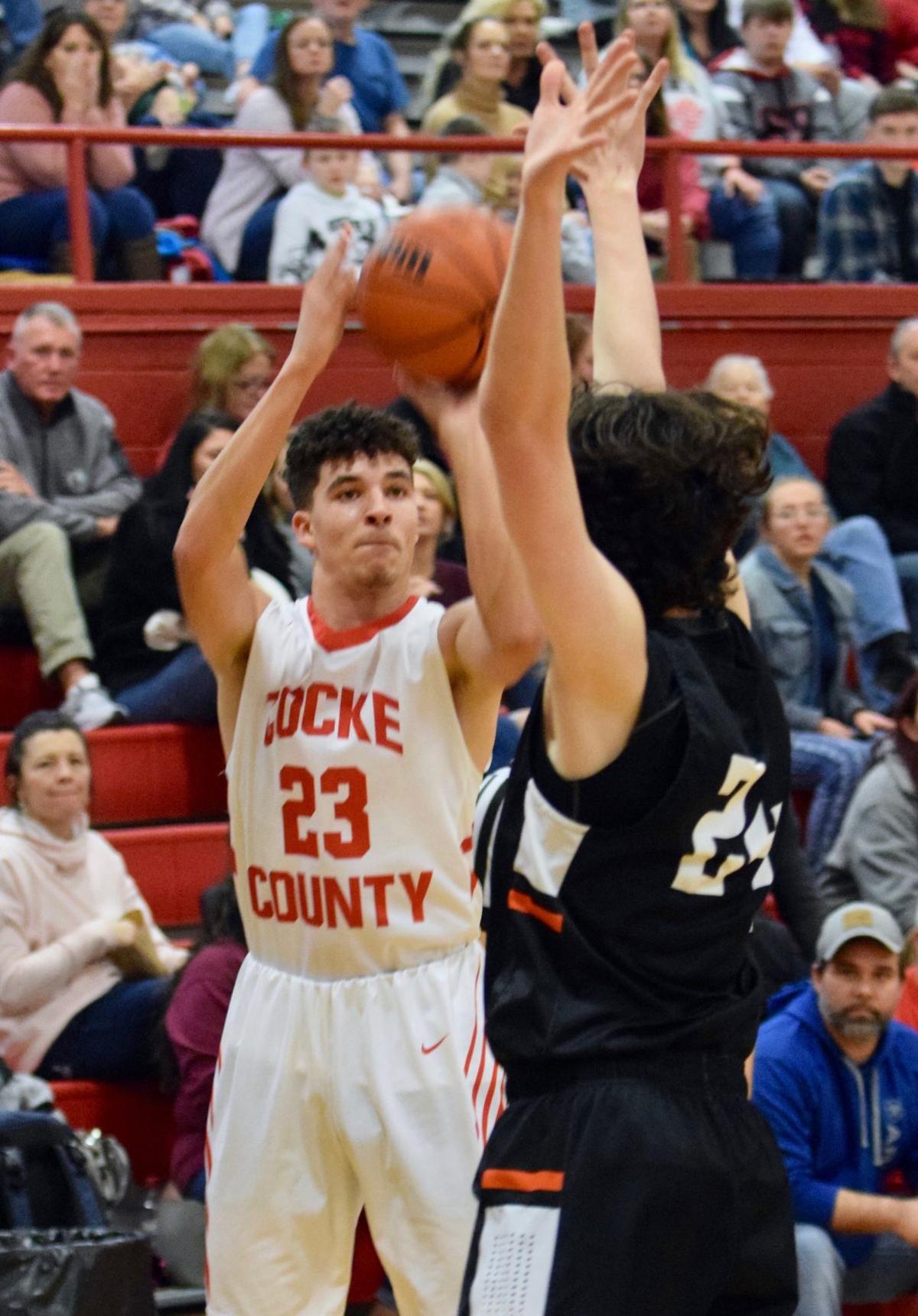 CCHS senior Isaiah Elliott puts up a 3-pointer over a Morristown East defender on Friday night.

Cocke County junior Keaston Jackson goes up for a shot in the paint during Friday night’s matchup with Morristown East.

CCHS senior Isaiah Elliott puts up a 3-pointer over a Morristown East defender on Friday night.

NEWPORT—Isaiah Elliott and A.J. Mills left no doubt they had accepted their coach’s senior night challenge — leave it all on the court.

Cocke County nearly ended its losing skid with a major upset, but the Fighting Cocks came up just short of Morristown East 56-52 on Friday night.

Elliott dropped 16 points in his final regular season home game, and he wasn’t going to let the Hurricanes (15-12, 7-5 District 2-AAA) build a comfortable lead this time. Furthermore, Elliott didn’t even allow East to maintain the lead, as he busted a go-ahead 3-pointer early in the third for a 28-25 Cocke County lead. His two free throws tied the game for the final time, 40-40, with the third quarter winding down.

“They left it out there,” CCHS coach Ray Evans said of his two seniors. “My only wish was for them to leave tonight knowing they did the best they could absolutely do. I just hate we can’t pull through one of these close ones.”

Down 22-11 entering the second quarter, Cocke County (6-20, 1-11) suddenly found itself within three points after Elliott knocked down his second 3-pointer. And East took a 25-22 halftime lead after the teams traded free throws.

Then it was freshman Baylor Baxter’s turn. After tying the game to begin the third, Baxter knocked down his second 3-pointer to put the Fighting Cocks ahead 33-27. Keaston Jackson then hit a floater and a layup to keep CCHS in the lead 37-34 before the Hurricanes fought back.

Mills kept CCHS alive in the fourth quarter, converting an and-one with 1:51 on the clock to make it a 52-50 game. East answered with Braden Ilic’s floater 17 seconds later, however, and the Fighting Cocks couldn’t score again until Jackson drove to the basket with 11 seconds remaining. Jackson’s basket pulled CCHS within 54-52, but Micah Simpson splashed two free throws to seal the win for East.

Jackson scored three of his baskets in the fourth quarter and finished with 12 points. Baxter and Mills each had 9 for the Fighting Cocks.

“We have grown quite a bit this year,” Evans added. “Every possession’s got to count from the opening minute. Tonight we played about 29 to 30 good minutes, but the slow start kind of got us.”

The Hurricanes led 11-2 before Jody Swann’s 3-pointer midway through the first quarter. After Elliott’s layup, Mills buried a 12-foot jumper to cut East’s lead to 14-11. But Simpson and Cooper Wright both hit 3-pointers from the left corner, giving East an 11-point lead.

Simpson totaled 31 points to lead East, and he already had 14 after one quarter. He buried two 3-pointers in the third quarter, the second coming from straight away well behind the arc. The shot gave East a 43-40 lead going to the fourth, and Simpson hit his fifth triple to make it 46-40.

Ilic scored 12 points for the Hurricanes, who have now won seven straight games against Cocke County. The outcome also gave the Fighting Cocks their ninth straight loss. CCHS would need to win two games in the District 2-AAA tournament to qualify for regionals and keep its season alive.