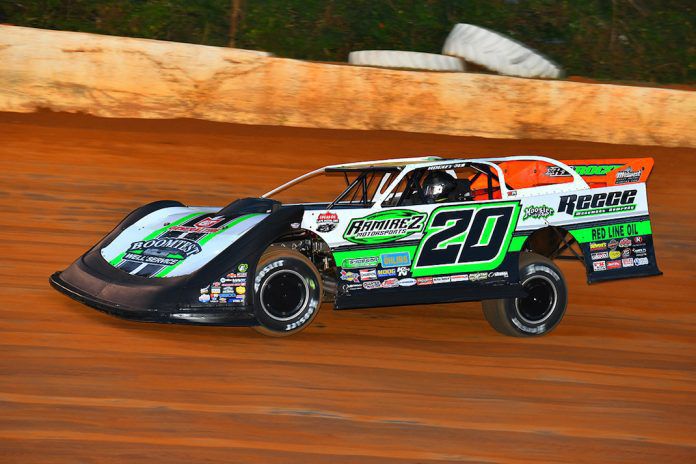 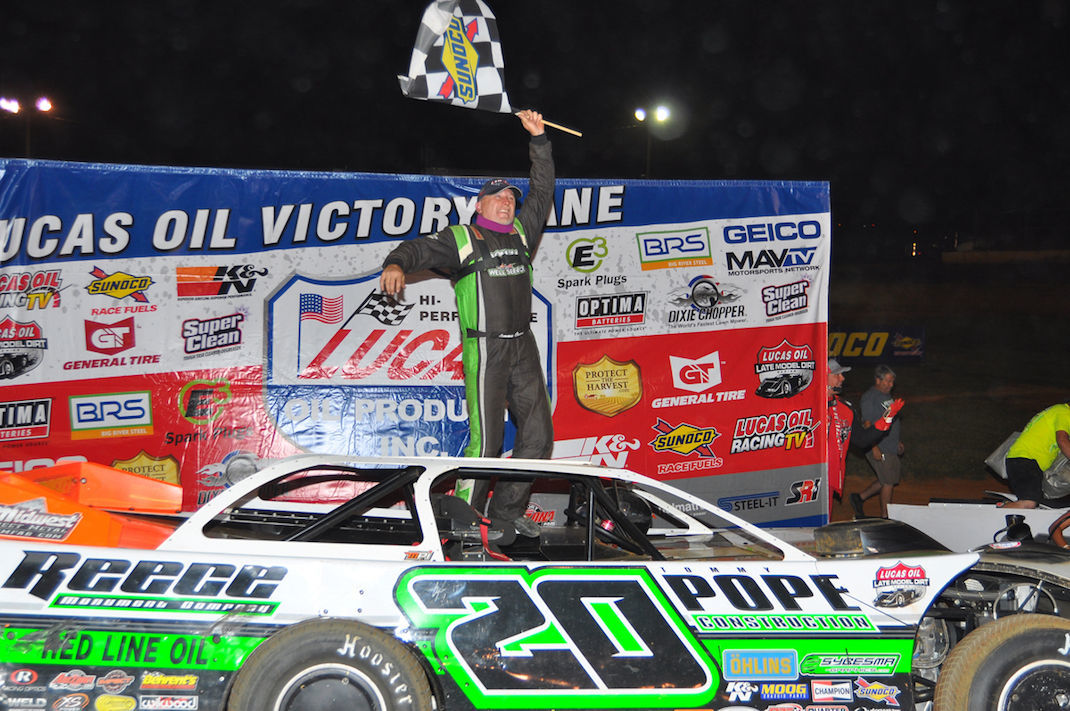 Make it four in a row for Newport’s own Jimmy Owens.

The three-time Lucas Oil Late Model Dirt Series champion cashed in his third and fourth consecutive victories of the year over the weekend with dominating performances at 411 Motor Speedway in Seymour, Tenn., and the Talladega Short Track in Eastaboga, Ala.

Both victories gave Owens his 69th career victory in the series, and strengthened his points lead to a 400-point edge over second place Jonathan Davenport.

The circuit returns to action this weekend with a two-day slate in Ohio. The series Muskingham County Speedway on Friday, July 3, and will end the weekend with the Independence 50 at Portsmouth Raceway Park on Saturday, July 4.

On lap 49, the final caution came out. On the final restart of the race, Owens pulled away once more from fellow Tennessee racer Cory Hedgecock, who finished second to Owens. It was a best career finish in Lucas Oil Late Model Dirt Series competition for Hedgecock. Jonathan Davenport came home in third followed by Shane Clanton and Shanon Buckingham.

“This car just keeps getting better and better every weekend we run it. It’s just awesome to come down here and perform like that in front of all of these fans and all of our friends,” Owens said. “This car was just on a rail tonight. You know it’s just been on a rail for the last month or so and I need to thank my crew Mullet, Cody, Kurt and my family.

“It’s been awesome so far this year. If we don’t win another race this year it’s been one of the greatest years ever so far. Vic [Hill] and I have gotten along from day one. He has helped us ever since no matter whose motors we’ve run. He has always been kind and helped lend a helping hand. Thanks to him for keeping us in tune.”

Hedgecock was pleased with his finish considering he was second behind the newly ranked No. 1 dirt late model driver in the country.

“We are absolutely happy with that finish. We appreciate everyone coming out and supporting us,” Hedgecock said. “Hats off to Jimmy, he was definitely fast. I saw Overton and Hardy wearing each other out and I thought they were going to wreck in front of me and tear my stuff all up. We knew if we could finish behind that 20 car it was going to be a good night.”

Davenport returned to the podium by taking third place at the end.

“I am just glad to be up here. He [Owens] is really good right now. Congratulations to them,” Davenport said. “Jimmy’s kind of struggled for a while with a lot of bad luck. When you’re fast time, win your heat, and just be that dominate in the feature, it’s a heck of a statement to make to the rest of us. We have nothing for him right now, but we will keep on working. We are turning our program around. At least we are up here on the podium tonight. It’s really only my second time here, but we are getting better.”

Owens took the lead at the start of the race with Hudson O’Neal quickly moving from his fourth starting spot to second. O’Neal ran in second behind Owens until he slowed on lap 8 and exited the race. Jonathan Davenport moved into second place where he would stay until a caution flew for him with 31 laps scored.

Richards became the third different driver to run in the second spot behind Owens. A caution with ten laps to go bunched the field up, but for the fourth series race in a row, Owens went on to the victory in the richest race ever ran at TST.

“Once again, the car was flawless all weekend,” said the 48-year-old, 3-time series champion in Lucas Oil Victory Lane. “My hats to the crew and Dale McDowell for prepping the track this week. They watered the track and gave us a racy track for a long time.

“It’s great to come home with a win for Pope Construction, they are just up the road from here. He has helped us for years. I am just glad he could be a part of it and be here with us. I don’t think I have ever been here where I haven’t run off the corner in one and two. I am glad the fans stuck it out and I’m glad the weather held out. Hopefully, we can keep it going.”

Richards tried his best to stay with Owens in the closing laps but settled for the second finishing spot.

“Those guys have a done a good job,” said Richards in reference to Owens and his crew. “Whatever he has going on, he’s been riding it. It doesn’t seem like he has to hustle it very much. Compared to last night, tonight, we got the car more dialed in. We ran the race we feel like we came to win.

“We were right there on him. He beat us in certain parts of the track, but we feel like we can run with him in other parts. Our balance is good, and we will just keep on digging.”