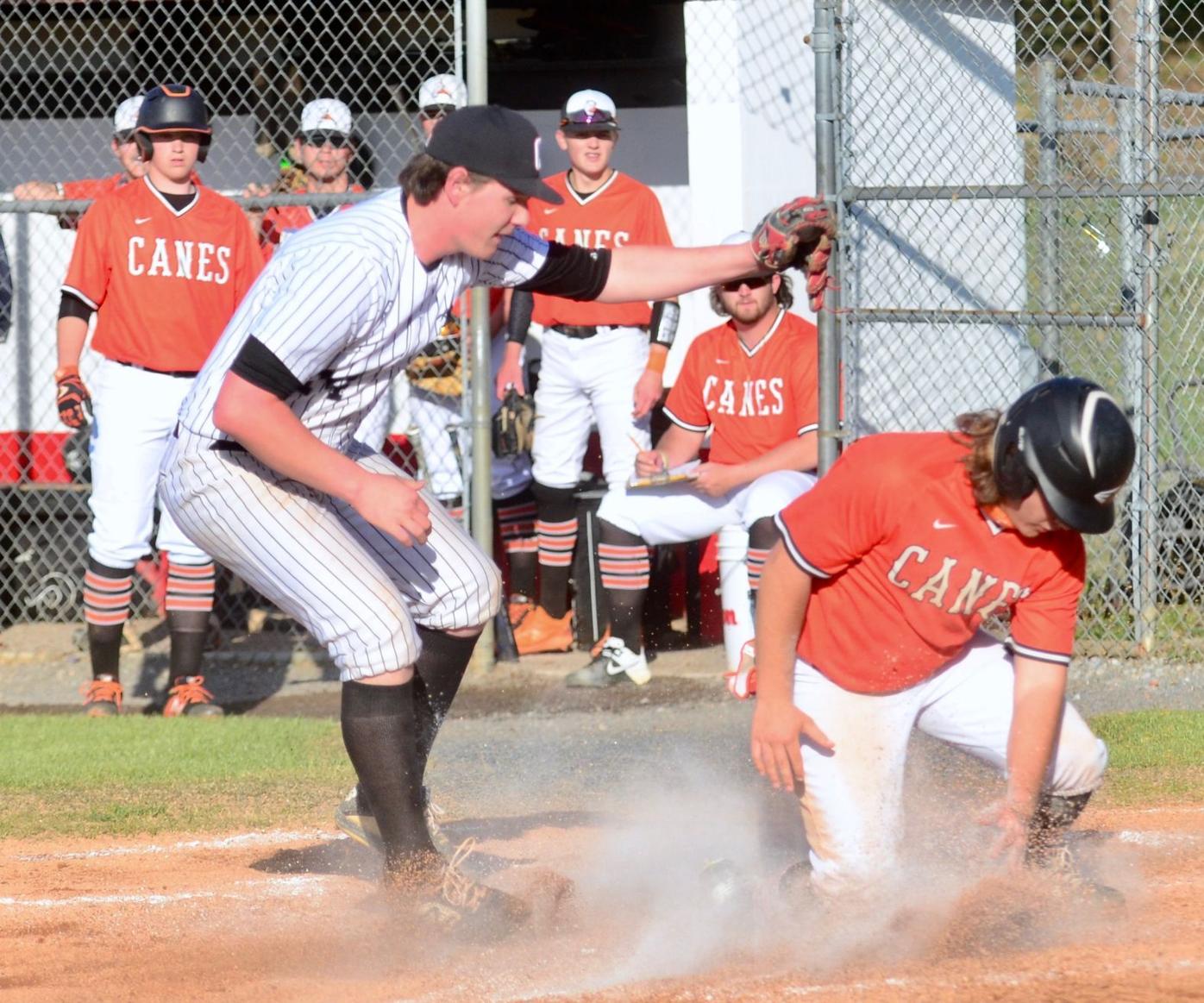 Cocke County senior Zac Cortez looks for the tag at the plate during Monday’s matchup against Morristown East. 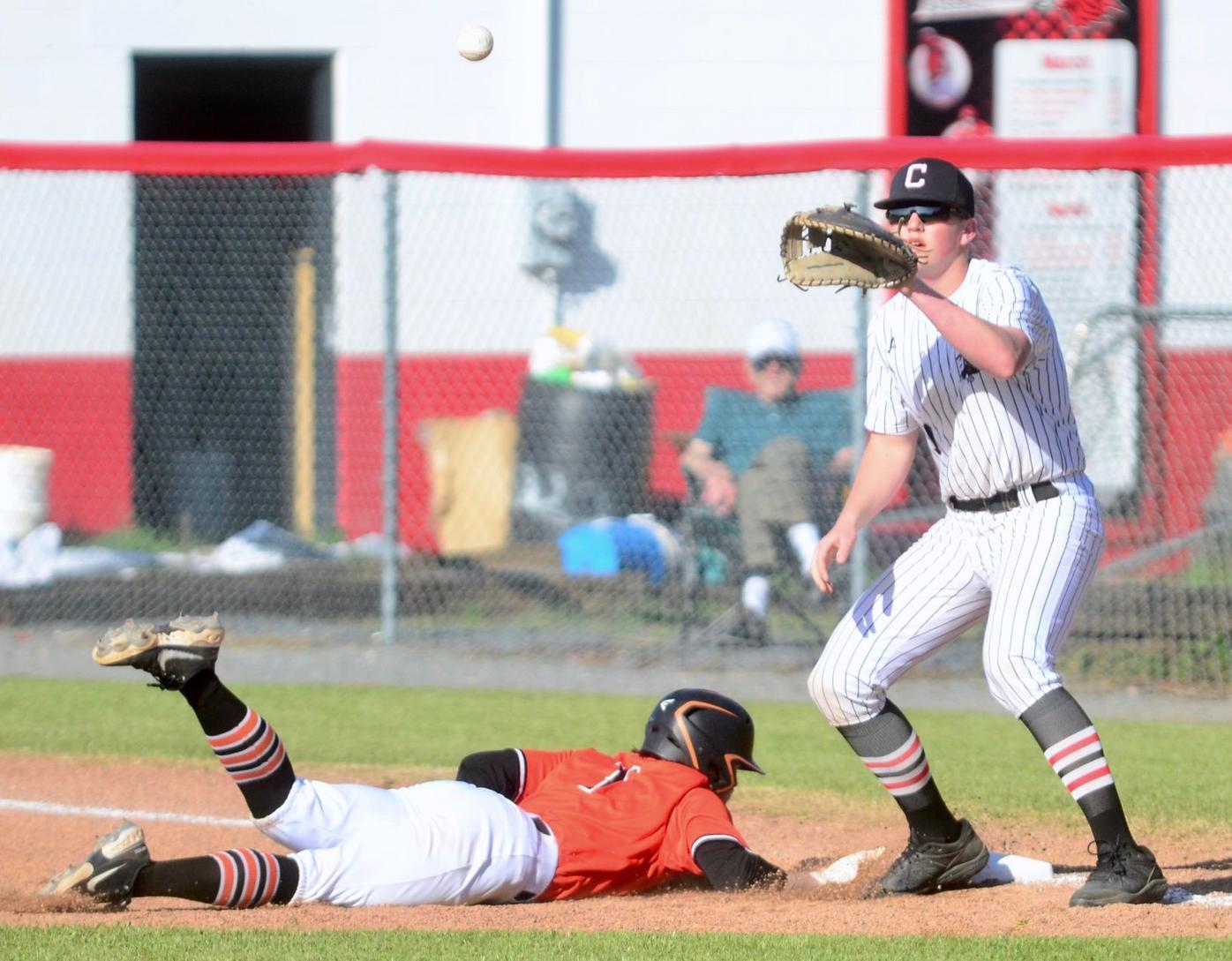 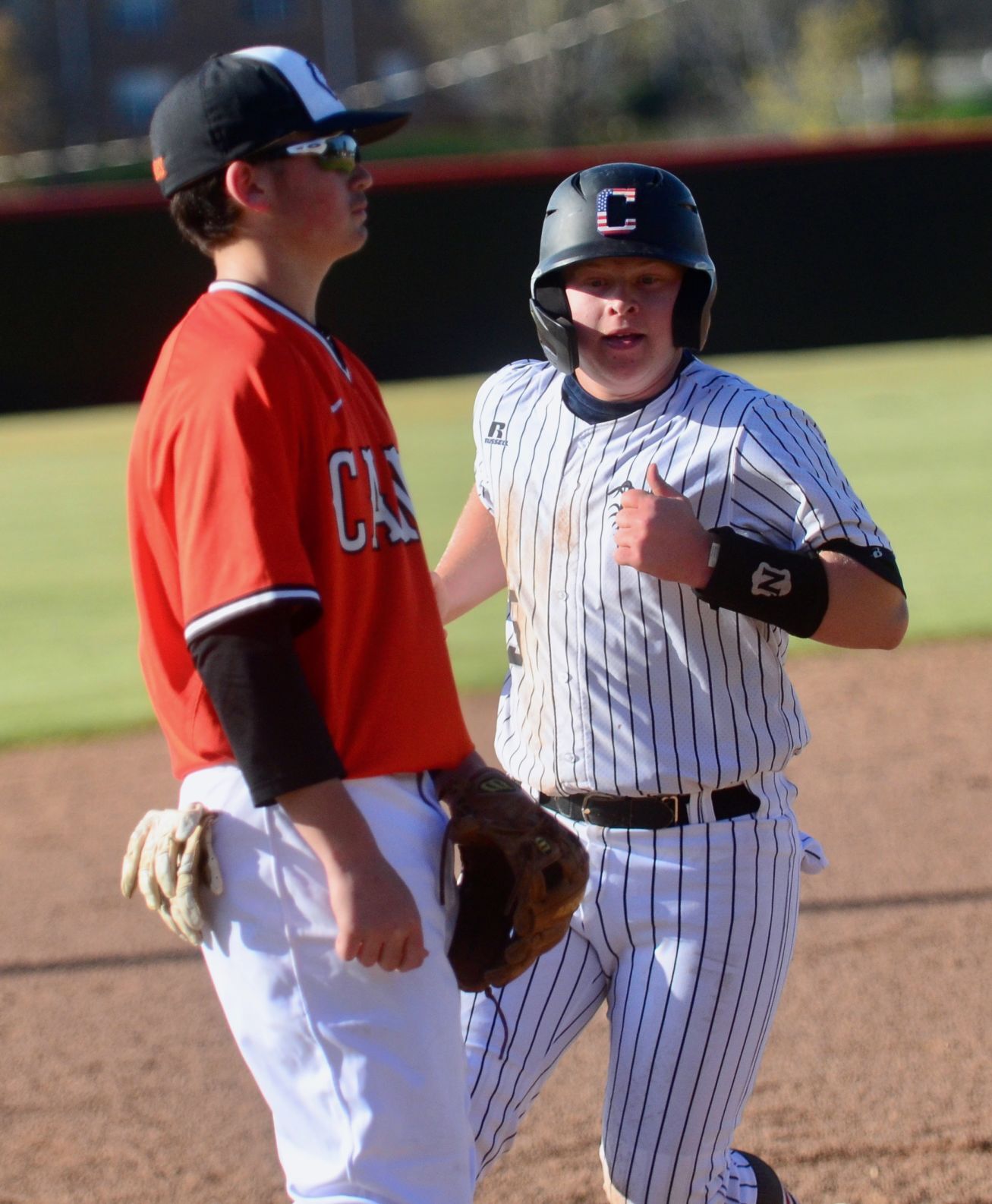 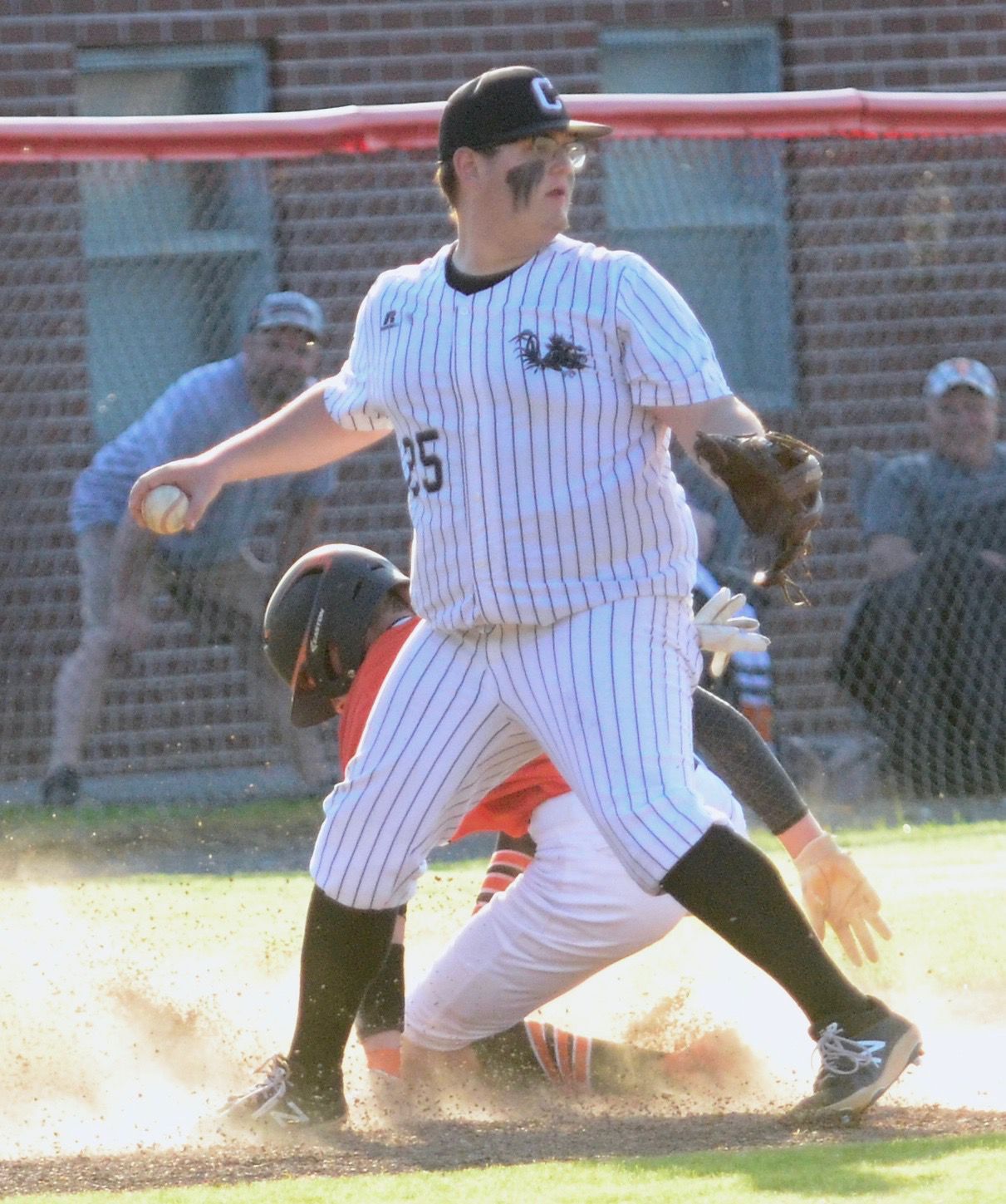 Cocke County sophomore Isaac Dorsey looks for a pickoff at second after getting the tag at third during Monday’s outing against Morristown East. 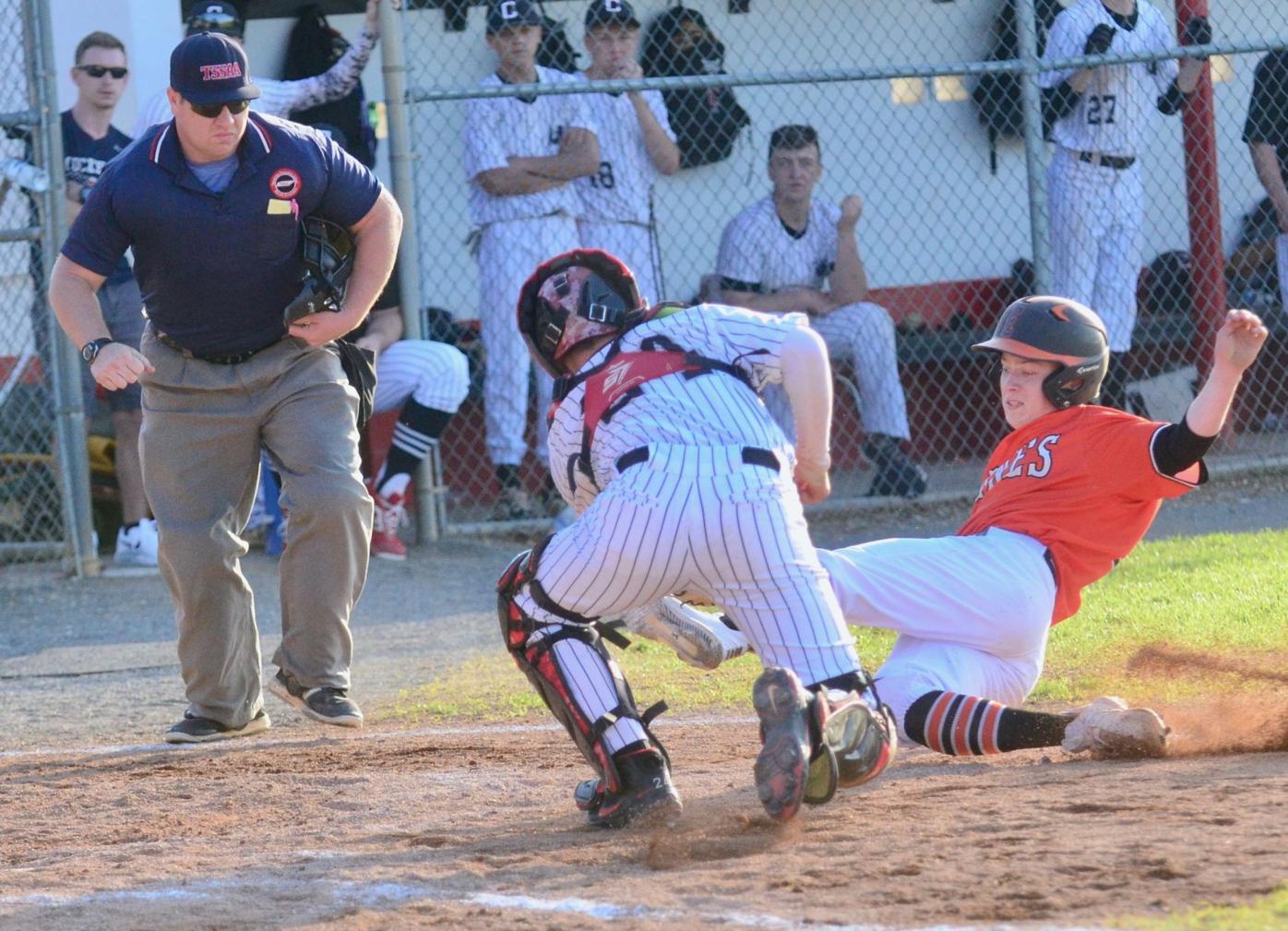 Cocke County junior Bryce Click gets the tag at the plate for an out against Morristown East on Monday.

Cocke County senior Zac Cortez looks for the tag at the plate during Monday’s matchup against Morristown East.

Cocke County sophomore Isaac Dorsey looks for a pickoff at second after getting the tag at third during Monday’s outing against Morristown East.

Cocke County junior Bryce Click gets the tag at the plate for an out against Morristown East on Monday.

NEWPORT—The Cocke County Fighting Cocks are well on pace for their best season since a 14-win campaign in 2014.

With eight wins through their first 14 contests of the 2021 season, Cocke County has made the most out of its return to TSSAA competition after the 2020 campaign was called off early.

“I’m real proud of the way we’ve started,” Cocke County coach Andy Chrisman said. “We’ve won big and we’ve won close. This year was such an unknown coming in. Not just for us, but for everyone. So many of our guys didn’t get their sophomore or junior year, and that’s a big deal.”

Of course, the Fighting Cocks at least benefitted from the generosity from the Tennessee Smokies organization during the high school summer league they put on over the summer for teams across east Tennessee. However, it still didn’t amount to a full high school regular season, as teams all over the state lost a year of competition and development.

“Our first four weeks of practice we probably spent more time scrimmaging against each other than we did anything else,” Chrisman said. “We didn’t have a choice. We didn’t have a lot of experience. A lot of those games were ugly, too, but it at least taught our guys why we practice some things. I think that played a big role in how we started the year.”

Cocke County started the season 5-0, including a series sweep over Morristown West to start the season, the program’s first over the Trojans since 2004. Through 14 games they’ve already eclipsed their win total from 2019.

Big bats are a key component in the Fighting Cocks’ early season success.

“Our offense is as deep as any team I’ve ever had here,” Chrisman said. “I expected us to be good at the plate, but they’ve still exceeded my expectations to start the year. I believe in these guys, but just because of all the unknowns coming into the year I didn’t see this hot start coming.”

Two of Cocke County’s seniors have started the year making the most of their final season in CCHS uniforms.

Dylan Ellison currently leads the team in all major batting statistics. With a .439 batting average, Ellison leads the team in hits with 18, RBIs with 16, has .707 slugging percentage and has the team’s lone home run of the season.

David Stinnett — who signed with Carson-Newman just before the season started — is second on the team in batting average, hits, and leads the team in on base percentage.

Stinnett is currently batting .436 for the Fighting Cocks, as he’s provided the dependability at the plate Chrisman has come to expect from his seniors.

“Dylan is a guy, in particular, that’s exceeded my expectations,” Chrisman said. “He’s always had a good swing, but has had more a knack for defense. This year, he’s our leading hitter.

What’s elevated the Fighting Cocks at the plate this year has been production up and down the lineup, though.

A pair of newcomers in Hunter McKenna and Dylan Jackson have brought extra life to the CCHS batting order. Both McKenna and Jackson are batting around .400 on the year, and have combined for 12 hits and eight RBIs.

“We’ve got guys that have really surpassed expectations, like Dylan Jackson,” Chrisman said. “He’s swung it well for us. And Hunter McKenna has been a pleasant surprise. I have to give (CCHS wrestling coach) Randy West credit for him.

“Randy told me he’d make our team better, even if he never plays an inning. Boy, was he right. Hunter is one of the most positive people I’ve been around. He makes me a better coach. He works hard, shows up on time and embodies everything you want out of a senior.”

While big bats have been a major storyline in Cocke County’s early season success, the job the program has had to do in replacing its pitching from a year ago has been more than commendable.

Chrisman has used 10 different players on the rubber so far this year, but his main core of Zac Cortez, Isaac Dorsey and Bryce Click have shouldered the load with a combined 51 innings pitched.

“(Jarrett) Ramsey deserves a lot of credit for his work with that group,” Chrisman said. “He does a great job calling the pitches and working with those guys. They believe in him. He calls a pitch and they throw it with conviction.”

The trio all tout an earned run average of under two. Cortez led the way with a 1.27 ERA going into Monday’s outing against Morristown East.

“Zac has been a pleasant surprise with the way he’s come on this year,” Chrisman said. “Not from a work ethic standpoint. He works hard and is very coachable. He just didn’t have any experience before this year. He’s really come out, been dominant and given us chances all year.”

Among the three, they also hold a combined record of 6-3 on the mound.

The Fighting Cocks have suffered back-to-back losses after falling to Northview Academy over the weekend and dropping the first of a 2-game series to Morristown East on Monday.

Despite the brief slump, Chrisman remains encouraged in this group’s ability to close out one of the most successful seasons he’s had since taking over at CCHS.

“Before the year started I noted we have to have a growth mindset, and continue to get better as the year goes on,” Chrisman said. “I think we did that early in the season, but we’ve got to get back to that.

“The sky is the limit for us. The schedule is only going to get harder as we go, so we’ve got to get back to constantly improving to meet our goals as a team.”