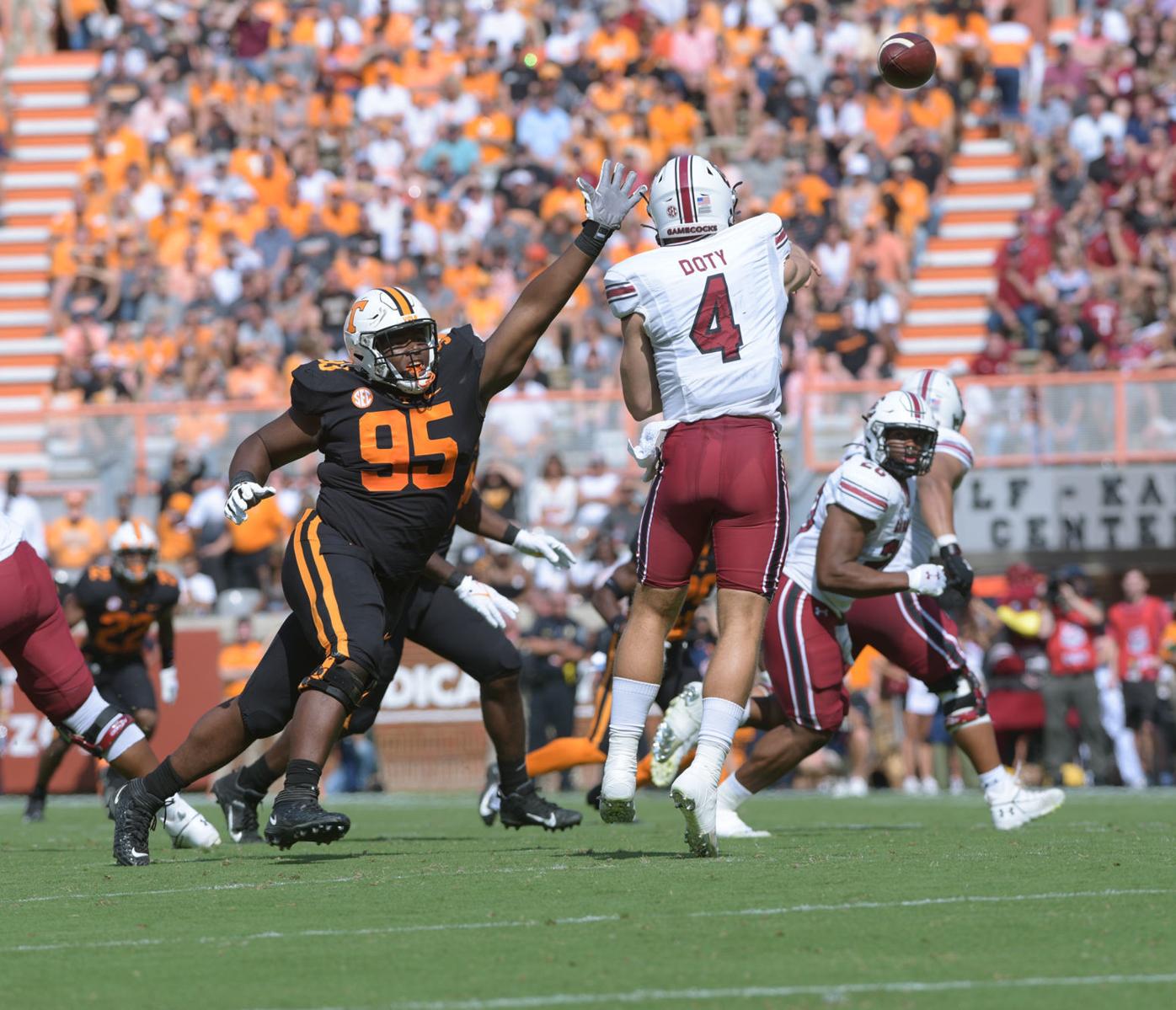 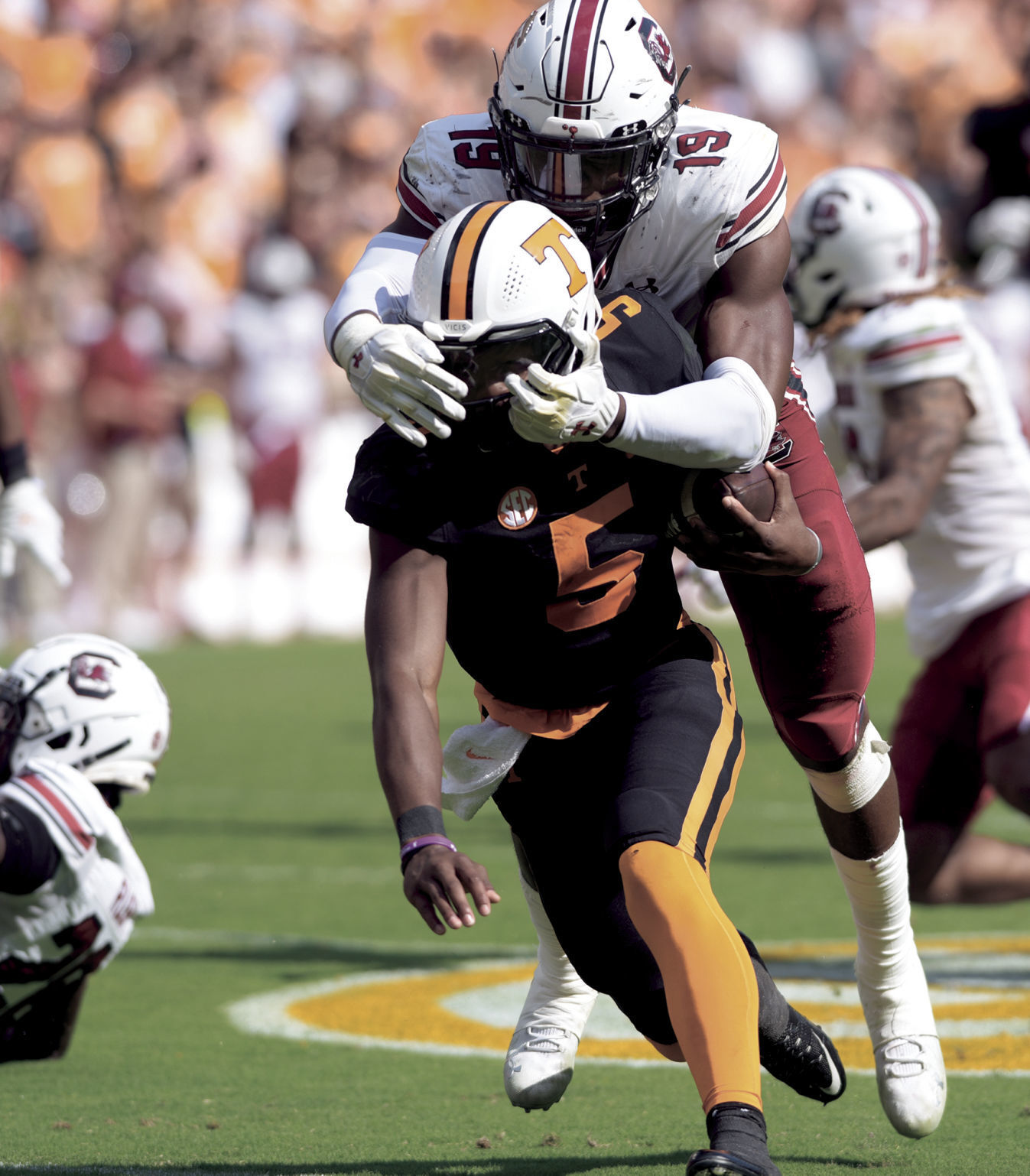 Hendon Hooker (5) draws the face mask penalty against the Gamecocks' Brad Johnson (19) at the end of a long run in the second half of Tennessee's 45-20 home win Saturday.

Hendon Hooker (5) draws the face mask penalty against the Gamecocks' Brad Johnson (19) at the end of a long run in the second half of Tennessee's 45-20 home win Saturday.

KNOXVILLE—Tennessee wore black and orange uniforms on a Saturday in October, fitting for a team that has been exorcising its demons in recent weeks.

For the second-straight week, the Vols offense shot out to a commanding lead en route to a 45-20 SEC East win over South Carolina at Neyland Stadium.

It may not have been Alabama or Georgia, but Tennessee (4-2, 2-1 SEC), donning black uniforms for the first time since 2009, showcased its ability to score quick and often against a struggling Gamecocks (3-3, 0-3 SEC) team, something the program had struggled to do itself against the league’s middle-of-the-pack teams for the last decade.

“Great preparation, great focus, understand what you’re going to see from the other side of the football,” Tennessee coach Josh Heupel said. “You see something different, being able to adjust. We had to that a week ago (against Missouri). And then executing. Those were the things that we saw early in the first half of the football game.”

Hendon Hooker passed for 225 yards and three touchdowns while rushing for another and running back Tiyon Evans ran for 119 yards and a score, already his third time rushing for 100-plus yards this season.

The Vols scored on their first four possessions of the game to go up 28-0 at the end of the first quarter following a Hooker 21-yard touchdown pass to Velus Jones Jr.

Jones finished with six catches for 103 yards out of the slot receiver position.

“It wasn’t a big transition (to slot receiver),” Jones said. “It’s all about preparation, practice, staying keyed in, watching the film after practice and just buying in, honestly. That’s what this team has been doing so far, we’re just going to keep striving.”

While Tennessee offense struggled to hit big plays in the first three games, it’s a problem the Vols have found a remedy for the last two weeks with a palpable resurgence inside Neyland.

“Man, it’s exciting,” Jones said. “Scoring is fun. I can only imagine how the players felt before us ... so it’s an amazing feeling. Everybody’s smiling. You can just feel the energy and you just love that feeling, so we’ve just got to keep scoring.”

Heupel has been adamant the Vols offense isn’t the only side of the ball that made strides since Week One.

He reiterated Saturday that the Tennessee defense has been key in back-to-back victories after forcing three turnovers against South Carolina.

The defense showed its aggression in the first quarter after the Gamecocks drove the ball inside the 5-yard line with a chance to cut into the Vols’ 14-0 lead.

South Carolina tried for a double pass, a play opposing offenses have found success using against Tennessee in previous games, but Jordan Burch’s pass to the end zone was snagged by defensive back Jaylen McCollough.

Five plays and 80 yards later, Hooker scored on an 11-yard run to give the Vols a 21-0 advantage.

“I saw him toss the ball to a lineman and something in my head just said, ‘That isn’t right,” McCollough said. “I just got back and it fell into my hands.”

To that point, it was the eighth turnover forced by Tennessee in its last four games.

“It all starts with your eyes,” McCollough said. “Just trusting your reads, trusting what you’re looking at and just having a good feel. That’s one thing Coach (Tim) Banks always harps on because we’re the last line of defense. You don’t know until you go.”

Tennessee was without several starters, including center Cooper Mays on offense and safety Theo Jackson on defense. Running back Jabari Small didn’t play and Evans left in the second half after taking a hit.

“Our guys have the next man up mentality,” Heupel said. “You saw today, guys that maybe hadn’t gotten their opportunity yet were ready when the opportunity presented itself today. If you continue to work and prepare and it’s about the team when you get your opportunity, you’ll be ready to play the way we need you to.”

One of the players that took advantage of his opportunity was sophomore defensive back Brandon Turnage.

The Alabama transfer recorded a team-high 14 tackles in his first career start with the Vols.

“Honestly, it was just truly a blessing (being able to start),” Turnage said. “Coach (Heupel) every day, every week talks about everybody being prepared. My name was called and I went out there and did what I had to do.”