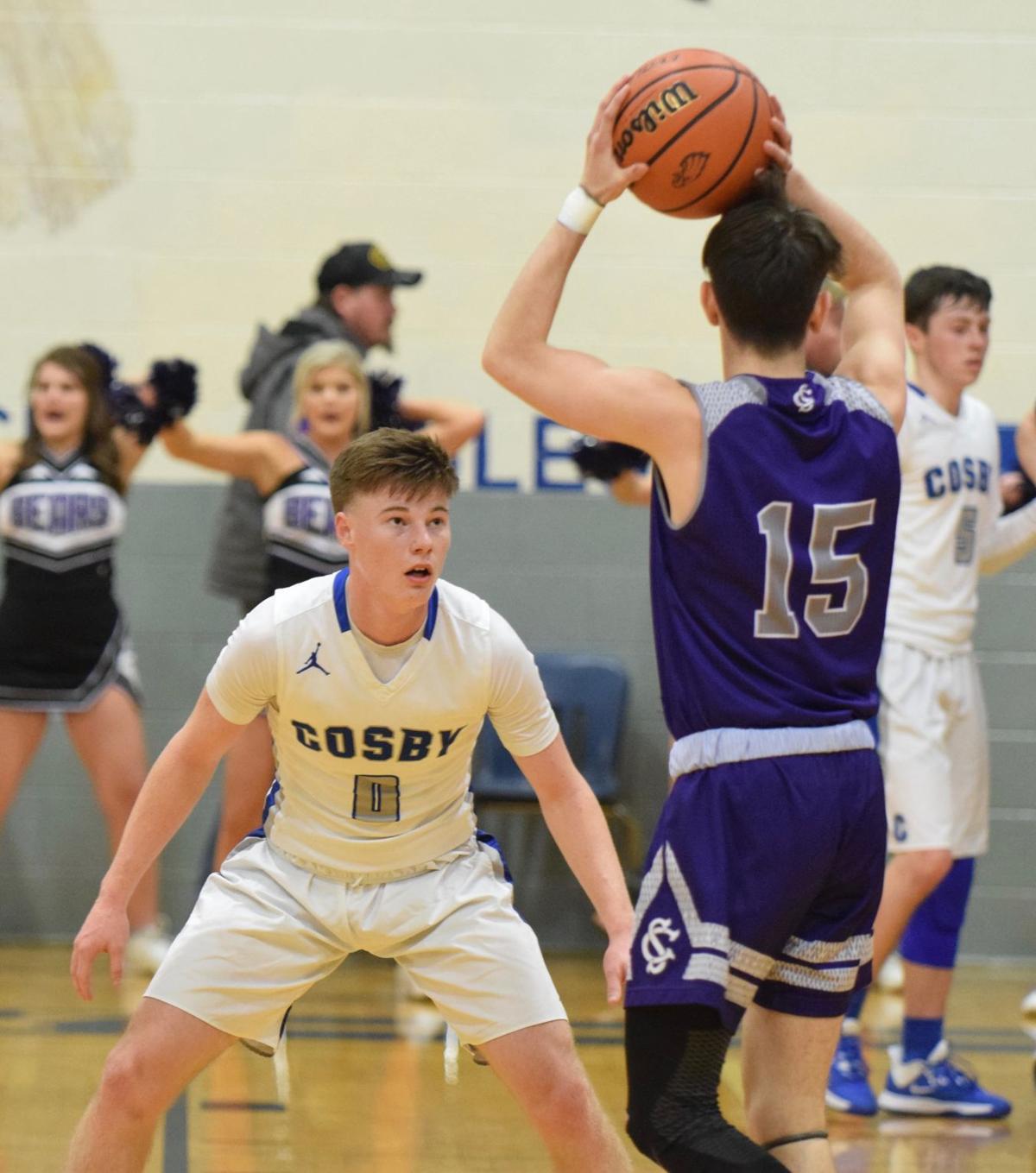 Cosby senior Jeremy Wise defends a Sevier County guard at the top of the key on Tuesday. 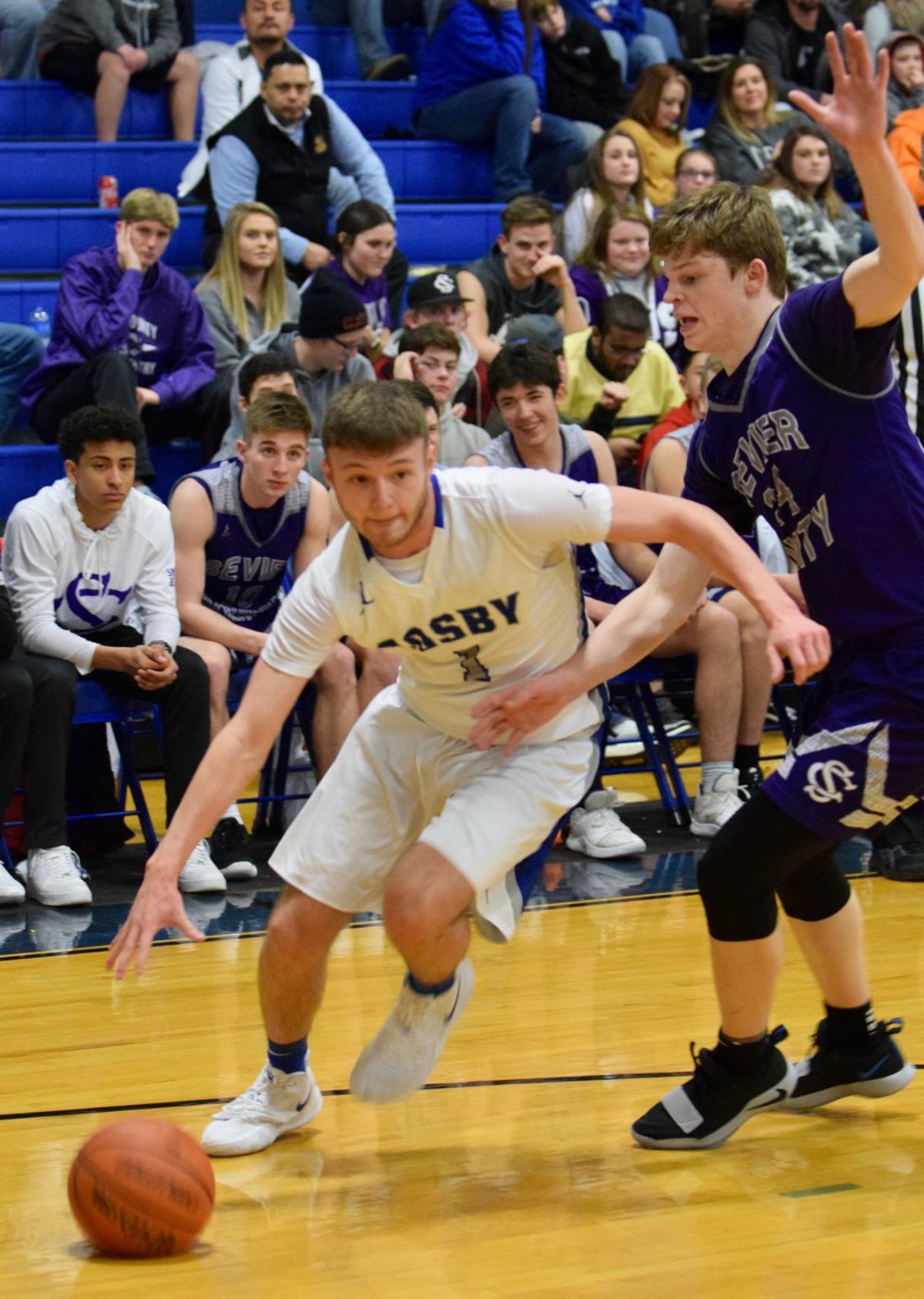 Cosby senior Jeremy Wise defends a Sevier County guard at the top of the key on Tuesday.

COSBY—Kurt Brooks sacrificed sleep studying how to attack Sevier County’s matchup zone. Wes Maples and Camden McElhaney, whether taking shots or not, displayed how many options the Smoky Bears have.

Where Maples left off in the first half, McElhaney picked up in the third quarter and scored 10 of his 14 points. McElhaney cut to the basket for a score and then pulled up for a 3-pointer late in the third, building a 16-point Smoky Bear lead. It was McElhaney’s second 3-pointer of the frame, which saw the Eagles (16-6) close the gap to 32-28 on Riley Galler’s early layup.

“They made some tough shots and at the end of the day, that’s what good players do,” Brooks said. “They’re good at slashing.”

Cosby found some early success against the matchup zone, taking a 10-4 lead in the first quarter on Braden Shaffer’s first of four 3-pointers. The Eagles led 12-11 after the first quarter and then 14-11 when Trey Johnson buried a floater. But the Smoky Bears (12-5) responded with an 11-0 run and never trailed again, although Johnson buried a straightaway 3-pointer just before halftime as Cosby trailed 32-26 at the break.

“It was kind of unconventional in the first half because normally you think about attacking the zone with good ball movement,” Brooks said. “But we did a good job of getting in the gaps.”

The Smoky Bears clogged those gaps in the second half and maintained a comfortable lead. In fact, Cosby didn’t hit a field goal in the fourth quarter until Shaffer’s final 3-pointer with 23 seconds remaining. Shaffer led the Eagles with 18 points, and Johnson had 16. Johnson already had 14 points by halftime including three 3-pointers in the final 2:32 of the second quarter. But Sevier County limited him to two fourth-quarter foul shots in the second half.

Shaffer was also in double figures at intermission, scoring twice from the paint in the first quarter along with two 3-pointers. His third triple cut Sevier County’s lead to 51-40 late in the third, and he sank two foul shots to make the score 56-42 going to the fourth.

“First thing we did in the locker room was we had a big group hug,” Brooks said. “I told them to keep their heads up high when they walked out of that locker room tonight. I don’t think the score reflected how close the game really was. We have a lot of stuff we can learn from tonight.”

Galler totaled 6 points, putting back a miss for his final basket in the third quarter. Jeremy Wise scored all 5 of his points in the third, sinking a 3-pointer to make it a 41-35 game before Sevier County answered with a 15-5 run. Donovan Miller hit a 3-pointer to begin the spurt before drawing contact on a 3-point shot and making all three free throws.

Hunter Workman finished with 3, knocking down a baseline jumper in the third.

Maples scored 9 of Sevier County’s 11 first-quarter points, knocking down a 3-pointer with 1:10 left in the frame. He added a layup and traded 3-pointers with Shaffer in the second quarter.

Jonathan Zhao-Olmos and Tyler Wilson both gunned in 14 points for Sevier County. Wilson scored 10 in the first half, and Zhao-Olmos drove to the basket four times in the final quarter. The Smoky Bears led 58-44 after Johnson’s free throws but built a 70-45 lead after a 12-1 run.

Cosby returns to action on Tuesday, Jan. 28, against Pigeon Forge. Tip-off is set for 8 p.m. at Cosby.