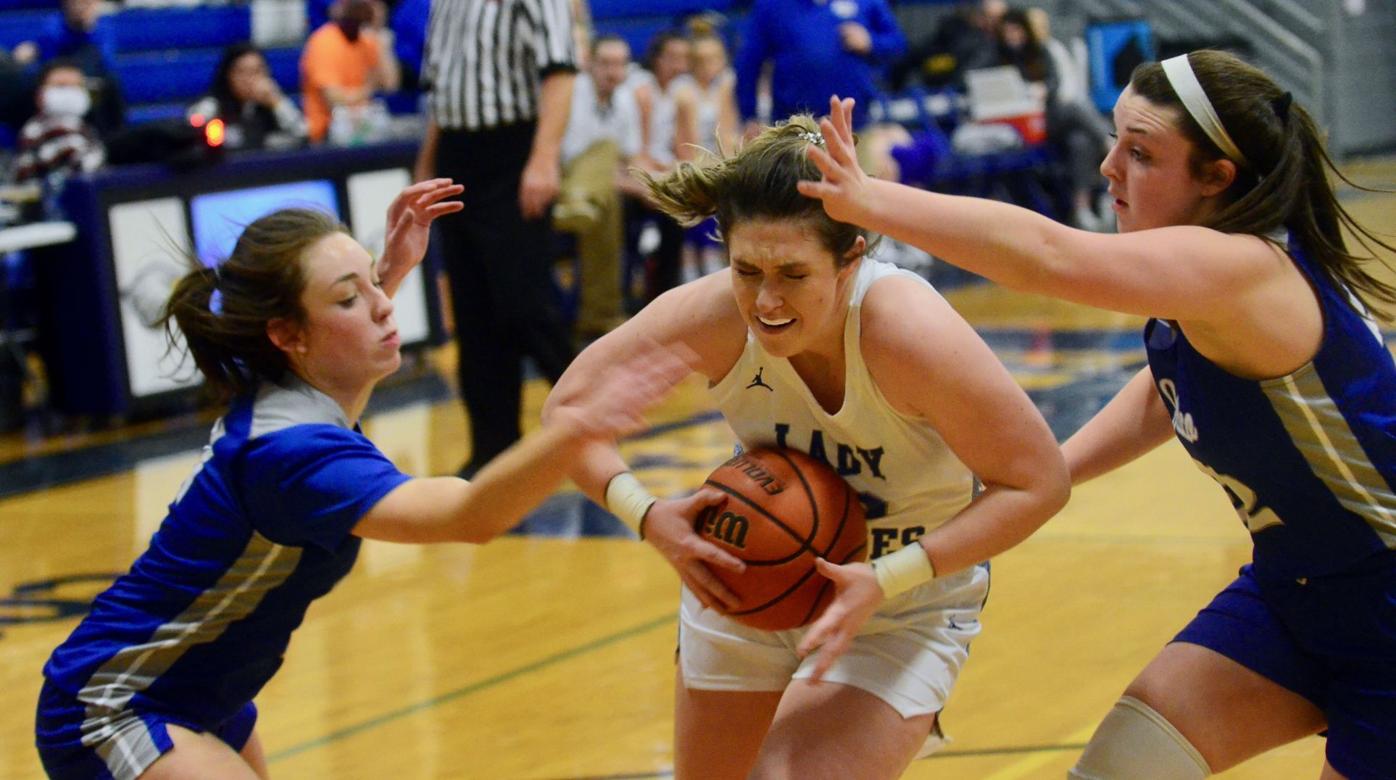 Cosby senior Lauren Ford (center) splits a pair of defenders as she drives towards the basket during Thursday’s District 2-A Semifinal against Jellico. 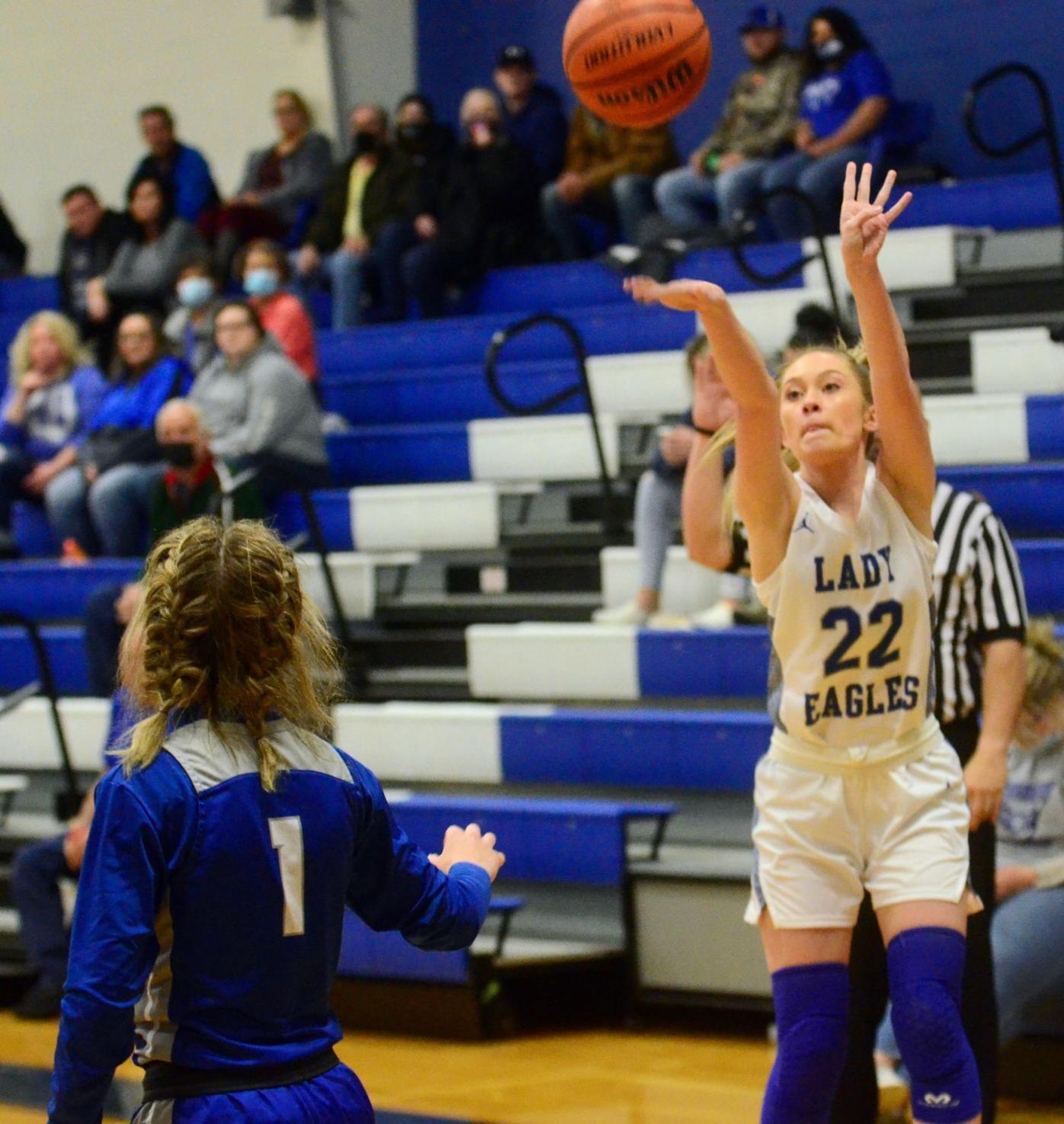 Cosby’s Kinley Coggins (22) puts up a three from the left wing during Thursday’s District 2-A Semifinal against Jellico. 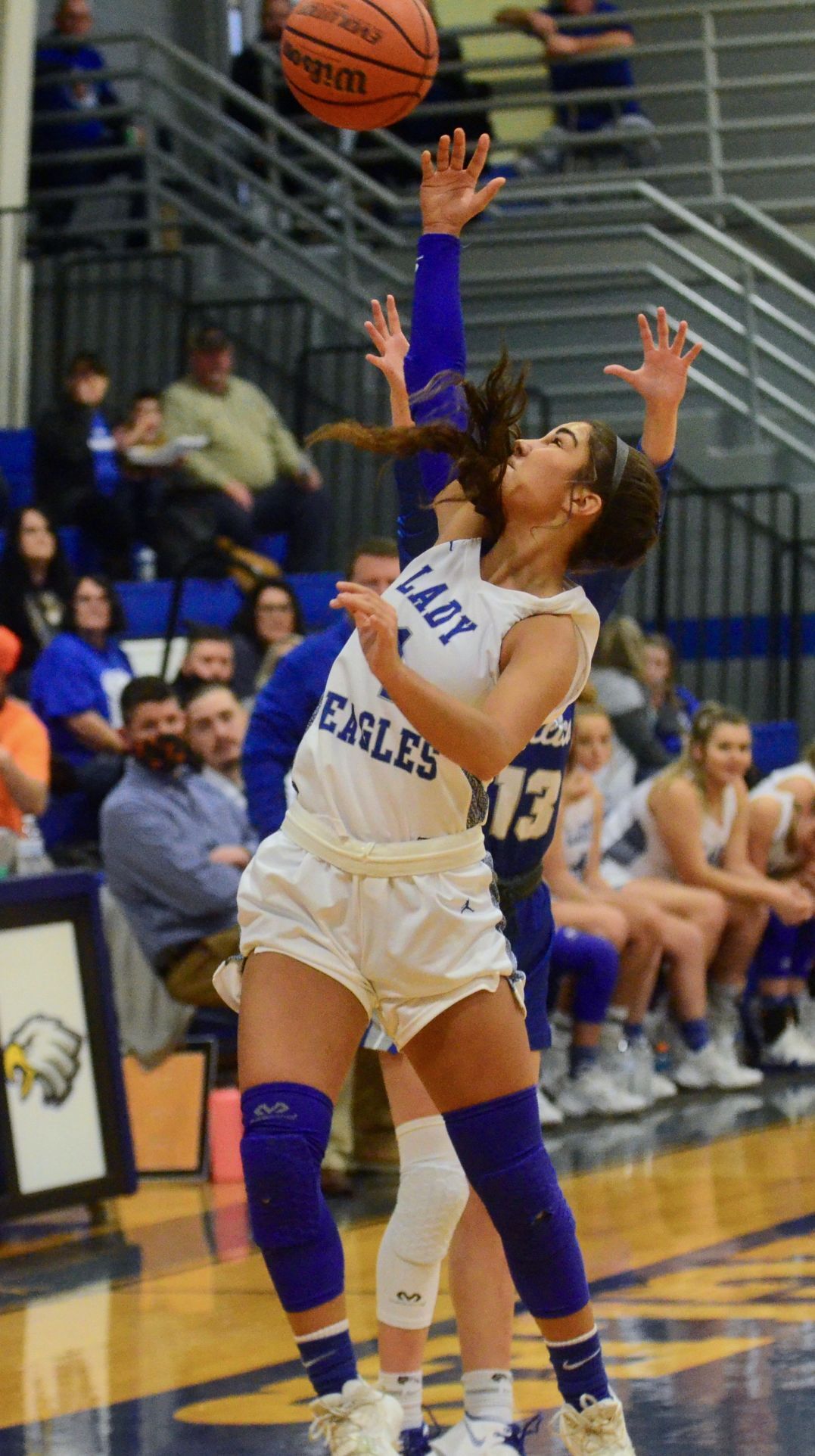 Cosby senior Bralyn McGaha steals a pass in the back court during Thursday’s District 2-A Semifinal against Jellico. 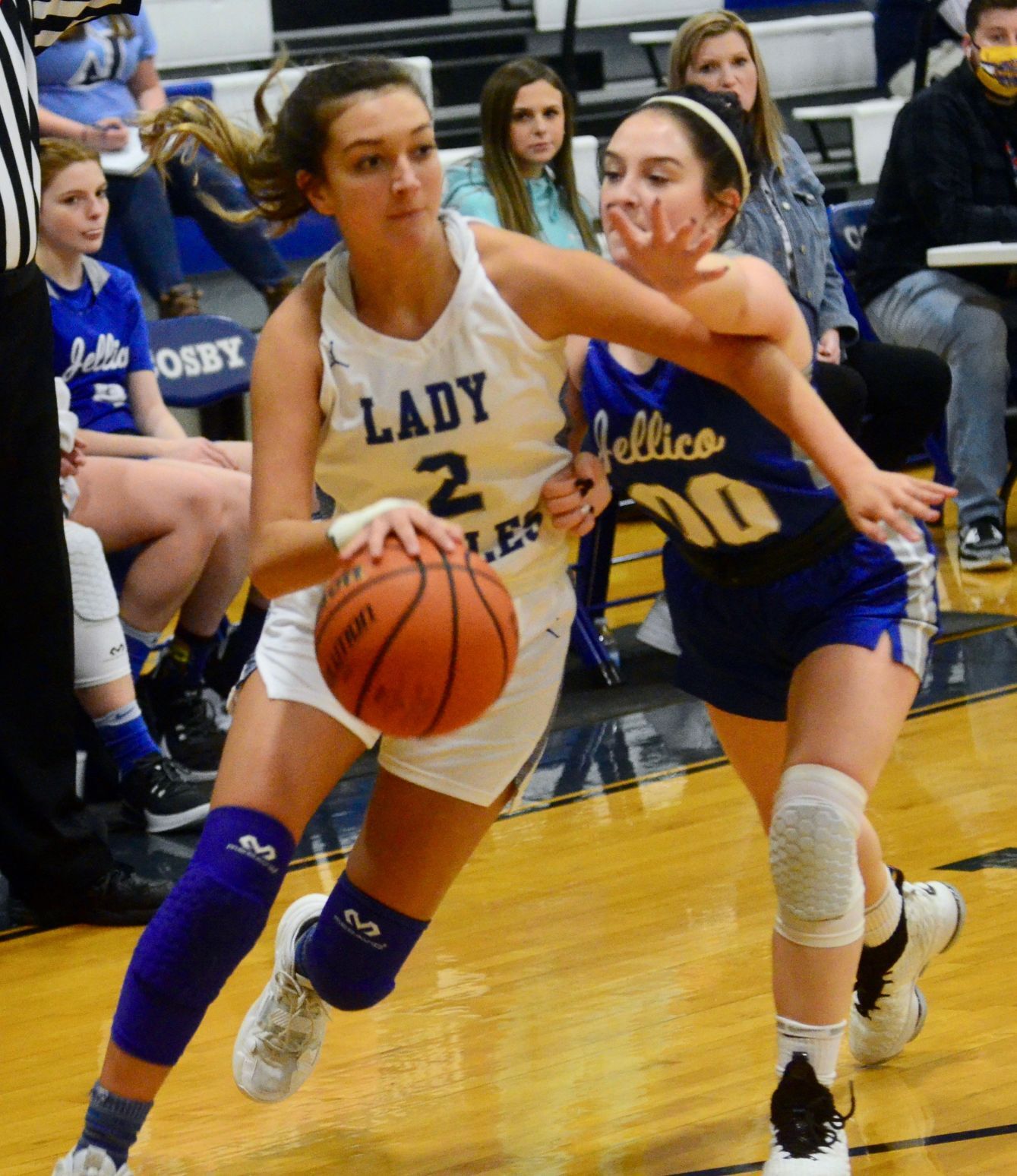 Cosby’s Gracie Johnson (2) drives past a defender towards the basket during Thursday’s District 2-A Semifinal against Jellico.

Cosby senior Lauren Ford (center) splits a pair of defenders as she drives towards the basket during Thursday’s District 2-A Semifinal against Jellico.

Cosby’s Kinley Coggins (22) puts up a three from the left wing during Thursday’s District 2-A Semifinal against Jellico.

Cosby senior Bralyn McGaha steals a pass in the back court during Thursday’s District 2-A Semifinal against Jellico.

Cosby’s Gracie Johnson (2) drives past a defender towards the basket during Thursday’s District 2-A Semifinal against Jellico.

COSBY—With yet another perfect record in league play, the Cosby Lady Eagles entered the District 2-A Tournament with the bracket’s top seed.

Cosby has dominated the league for the past four years, and that narrative didn’t change on Thursday.

The Lady Eagles dominated from the opening tip, topping the Jellico Blue Devils, 58-12, and securing their spot in next week’s title game for a shot at their fourth consecutive district crown.

Moving forward, Cosby is slotted in Monday night’s District 2-A championship game where it will meet the Greenback Lady Cherokees for the fourth consecutive season.

“I told the girls all the easy ones are over,” Cosby coach Cody Lowe said. “The games of blowing people out are over. We’ve had a lot of success over Greenback in my time of coaching, but they’re leaving the league next year and would love to take us out in the district championship.

“We’re gonna watch film over the weekend and prepare our girls for the championship. Best part is we’re playing at The Hill the rest of the way.”

Greenback went to overtime in its district semifinal matchup on Thursday, as the Lady Cherokees were able to grind out a win over Washburn, 43-38.

Kinley Coggins pieced together a game high of 15 points in Cosby’s victory on Thursday.

Her team-leading effort came at a fitting time, as late Cosby great Sheena Coggins was honored with a plaque presented to her family to be hung in the lobby of the gymnasium — along with several other great Cosby athletes — during halftime festivities.

For Kinley Coggins, Thursday night’s performance is another solid effort as the Lady Eagles’ sharp-shooting guard gets back to form after going through a mid-season absence.

“Kinley started for us at the beginning of the year but had to quarantine due to COVID,” Lowe said. “We had to put Gracie Johnson in the line-up and she produced a lot for us. I really like having someone come off the bench and give us a spark, and Kinley just did that for us. She played really well and made three 3-pointers and passed the ball really well. It was a really great team effort early for us.”

Joining Coggins in double figures were seniors Leia Groat and Lauren Ford, who each finished the night with 11 points apiece.

Early in the first quarter, Jellico scored the first two points of the contest and gained their only lead of the game, 2-0.

With the hot hand early on, she connected on three 3-point field goals to spark a 16-0 first-quarter run. Kinley Coggins also recorded a steal and two rebounds in the blow-out win.

“We just picked up the intensity on defense.” Lowe said. “We did to them what Grainger did to us. We have some great athletes. We let them be athletic and let them make some plays.

“They had a tough time keeping up with our intensity and running their offense. Leia and Bralyn (McGaha) bring that spark for us and that opens up the floor and brings a lot of great things.”

The Lady Devils kept the theme of the night with scoring the first basket of the quarter to start the second, but were still behind, 20-4.

With the size and depth advantage over the Lady Devils, Ford attacked the basket and scored six points in the paint. She also showcased her range, burying a three to add to her 11 points in the win. Ford also recorded three rebounds and a steal.

Cosby got to the charity stripe in the second quarter, but struggled within the first four minutes of the quarter.

Groat scored five of her 11 points on the night from the free-throw line, adding four steals, two rebounds and two assists in the win.

The Lady Eagles shot 2-of-5 from the line, but would follow that up with a 17-0 run that would carry on into the third quarter.

Jellico struggled on offense in the second quarter, turning the ball over seven times while only scoring seven points to make a small dent in the very large deficit.

After the half, the Lady Eagles continued to dominate by opening the quarter scoring the first six points, led by Kinley Coggins and Groat.

Jellico had four scorers in the loss, with Leona Douglas leading the team with five points.

Ali Smith came off the bench for Cosby on Thursday night and produced immediately for the Lady Eagles.

Smith would tie Groat with four steals, while adding seven points and two rebounds off the bench for Cosby.

With a huge lead, more Lady Eagles would fill the stat sheet.

Sabrina Keller added two points, four rebounds and a steal, while teammate Devian Hall scored two points to go along with three steals and a defensive board.

As the continuous clock would run in the fourth quarter, The Lady Eagles scored the final four points of regulation to defeat the Lady Devils, 58-12.