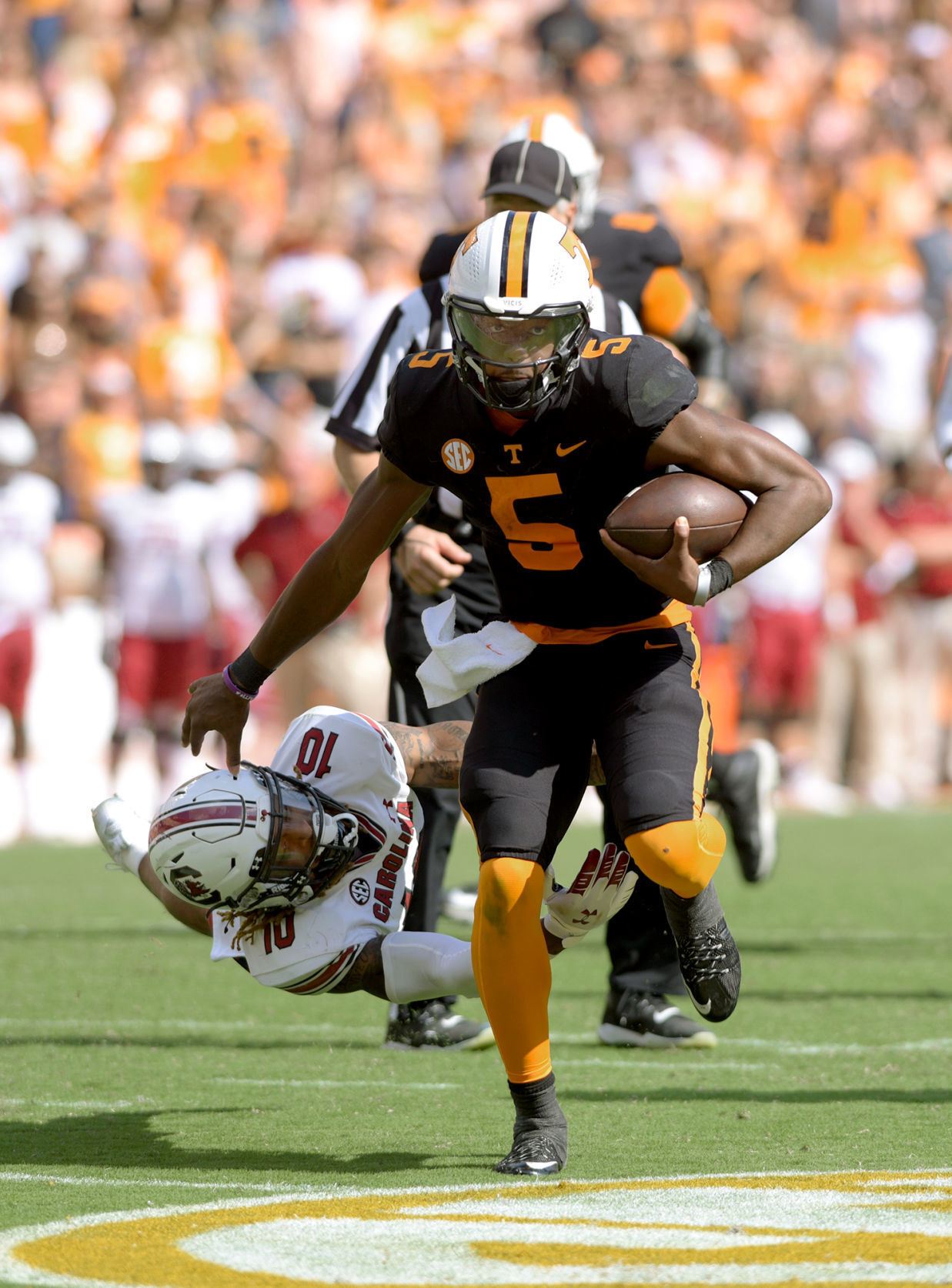 Hendon Hooker (5) steps through the tackle attempt by R.J. Roderick (10) as he runs into the secondary of the Gamecock defense in the Vols’ 45-20 home win Saturday. 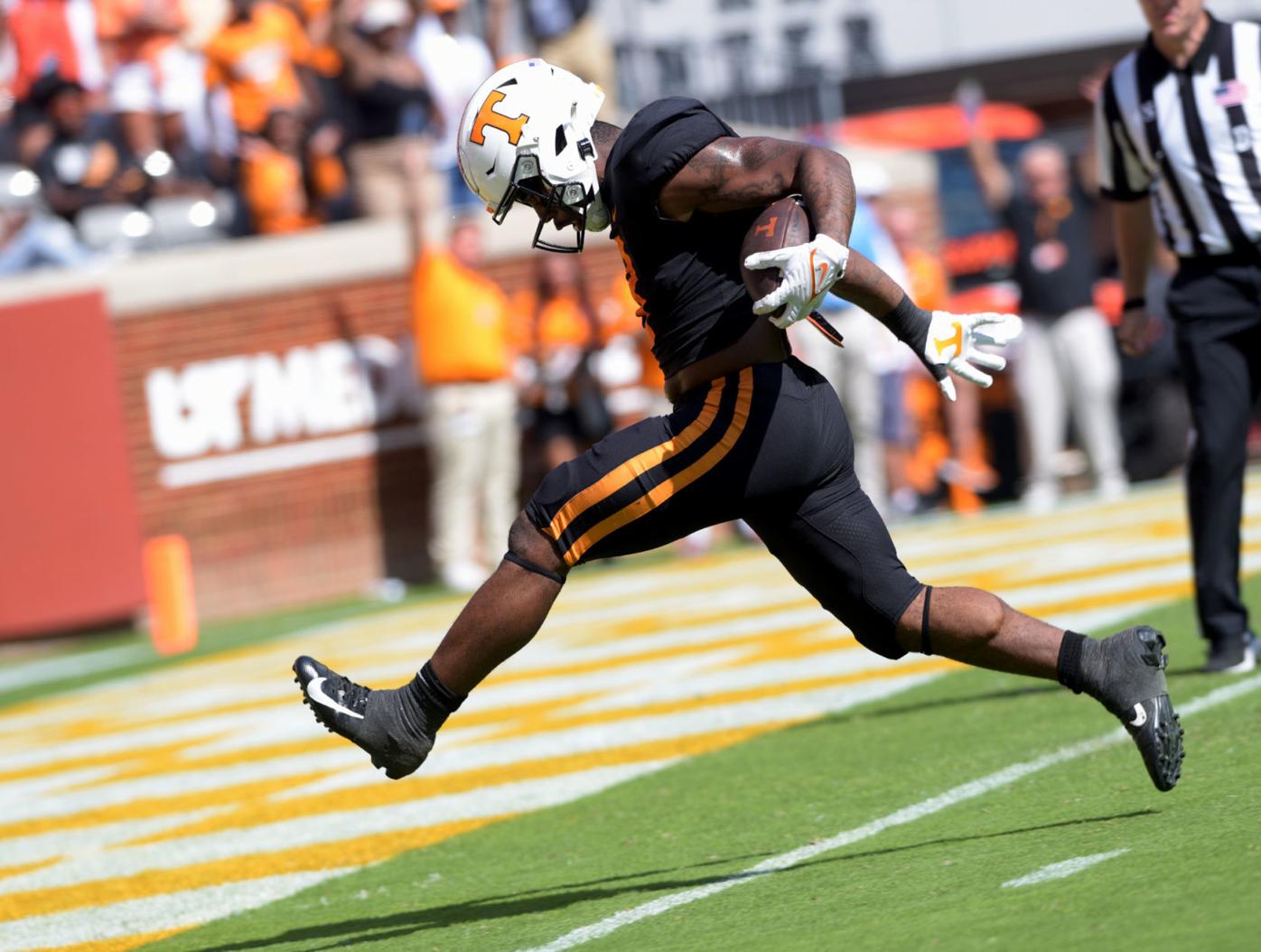 Tiyon Evans (8) crosses the end zone to cap a 45-yard run to build the Vols' lead to 35-0 in Saturday's game against South Carolina. 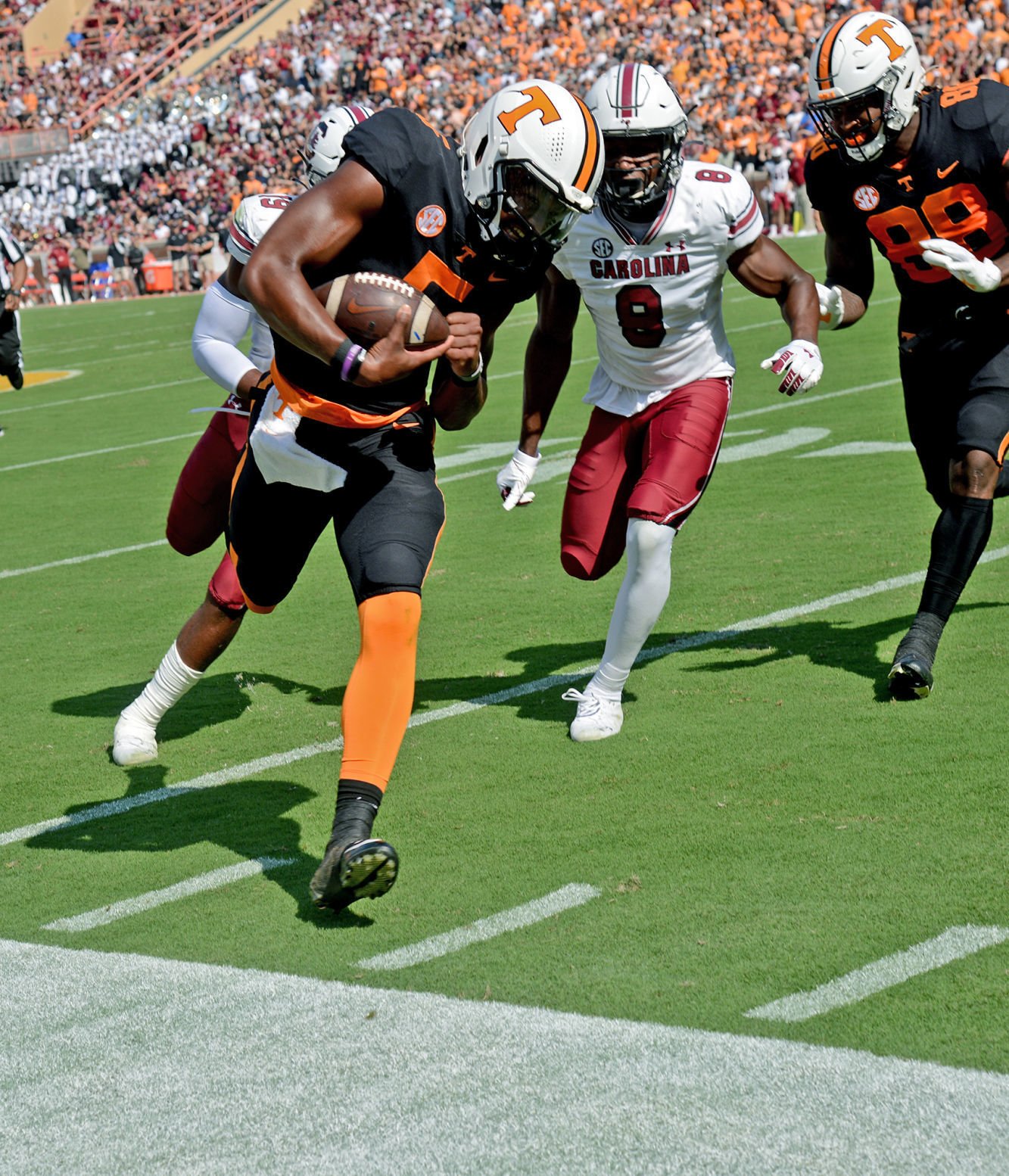 Hendon Hooker (5) carries the ball deep into Gamecock territory in UT's 45-20 win over South Carolina on Saturday at Neyland Stadium.

Hendon Hooker (5) steps through the tackle attempt by R.J. Roderick (10) as he runs into the secondary of the Gamecock defense in the Vols’ 45-20 home win Saturday.

Tiyon Evans (8) crosses the end zone to cap a 45-yard run to build the Vols' lead to 35-0 in Saturday's game against South Carolina.

Hendon Hooker (5) carries the ball deep into Gamecock territory in UT's 45-20 win over South Carolina on Saturday at Neyland Stadium.

KNOXVILLE—Josh Heupel hopes to put on a show for Tennessee’s fans.

When his team is rolling, as it often was during the Vols’ 45-20 win over SEC foe South Carolina on Saturday, he wants it to please a fanbase starved for explosive plays and high-powered attacks.

“I hope they enjoy the heck out of it,” Heupel said. “We’re going to play fast and physical in all three phases of the game. Offensively, yeah, we’re probably a little bit different than what’s happened, but the defense too, the ability to be multiple, to be aggressive.

“Our kids are competing really hard and I think that’s the first step to making this fanbase and this state extremely proud of who we are on the football field.”

Heupel may have cited all three phases of the game, but it’s Tennessee’s offense that has impressed the most the last two weeks. After amassing 62 points and 683 total yards, 458 of which came on the ground, in their win over Missouri last week, the Vols scored 38 points in the first half against South Carolina on Saturday.

The offense slowed in the second half, as Tennessee mustered just one touchdown, but it still finished with 472 total yards in running Heupel’s patented up-tempo, high-flying scheme. After some early-season struggles, it now looks as if the Vols are comfortable and confident in running such an offense.

South Carolina coach Shane Beamer conceded after the game that though his Gamecocks prepped for Tennessee’s tempo, it fell victim to it early.

“We felt prepared to play and ready to handle the tempo,” Beamer said. “Obviously, we didn’t do a great job of handling the tempo early in the game and that got us.”

Much of Tennessee’s recent offensive success is due to the play of quarterback Hendon Hooker, who started the season as Joe Milton’s backup before moving into the starting role.

Hooker scored all four of his touchdowns Saturday in just the first quarter, throwing for three and rushing for one. In all, he completed 17 of his 23 passes for 225 yards while recording 66 yards on the ground.

“Just being on the same page, we’re starting to really gel and get a good feel for one another,” Hooker said. “Those guys are incredible athletes, and they make great plays when the ball is in their hands. I just try to get the balls to them as soon as possible.”

Tennessee didn’t just succeed in throwing the ball Saturday. Tailback Tiyon Evans, a breakout star for the Vols who transferred from the junior college ranks, ran for 119 yards and a touchdown on 16 carries.

Running the ball successfully is just as important to Heupel’s high-octane offense as throwing it, and Tennessee has shown proficiency in both phases the past two weeks. From both fanbase and recruiting standpoints, Heupel and his staff hope the explosiveness continues and those outside the program keep noticing.

“For a long time when you take over a program you’re talking about what it’s going to look like … Young men that are looking for the right things in their college football experience I think gravitated towards our program,” Heupel said.

“Now you get an opportunity to see what it looks like on the field. We’re one of the fastest, most aggressive football teams on the field every single Saturday. Some people approach that with, ‘Hey that’s an offensive mindset,’ no that’s how we want to be in all three phases of the football game. I know recruits are seeing that week in and week out.”