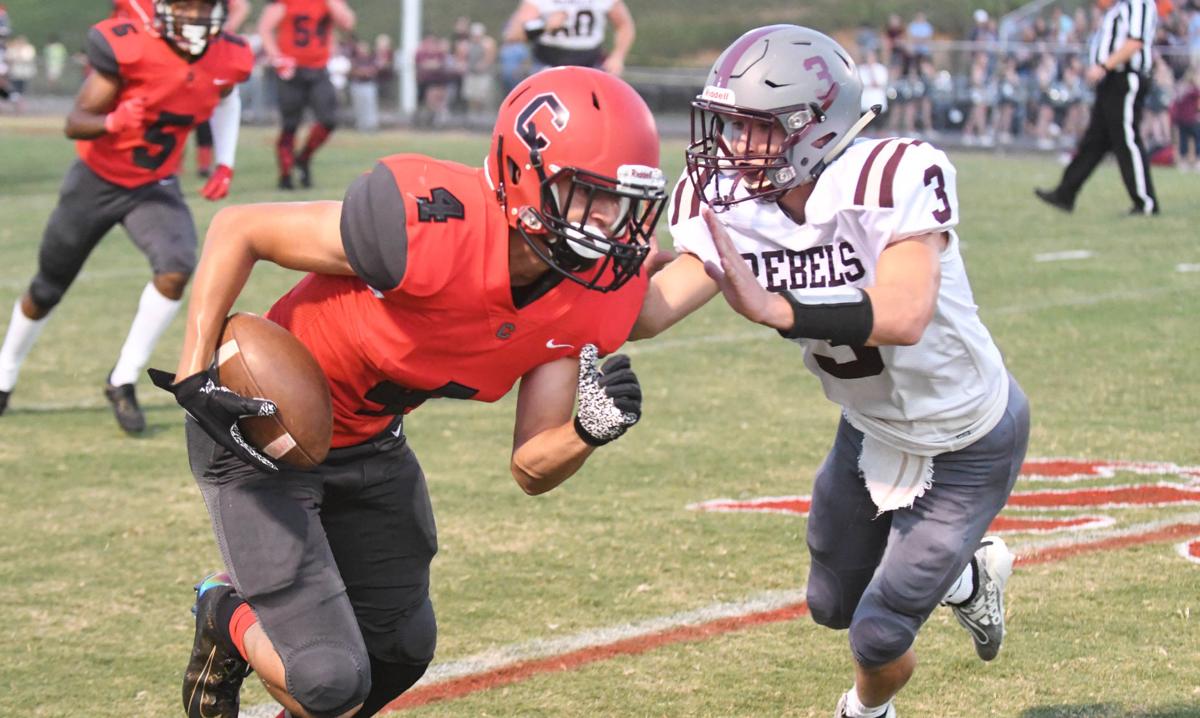 FILE — Cocke County receiver Isaiah Elliott makes a break down the sideline during the Fighting Cocks’ week 3 matchup against South Greene. Elliott had Cocke County’s only touchdowns in Friday’s loss at Tennessee High. 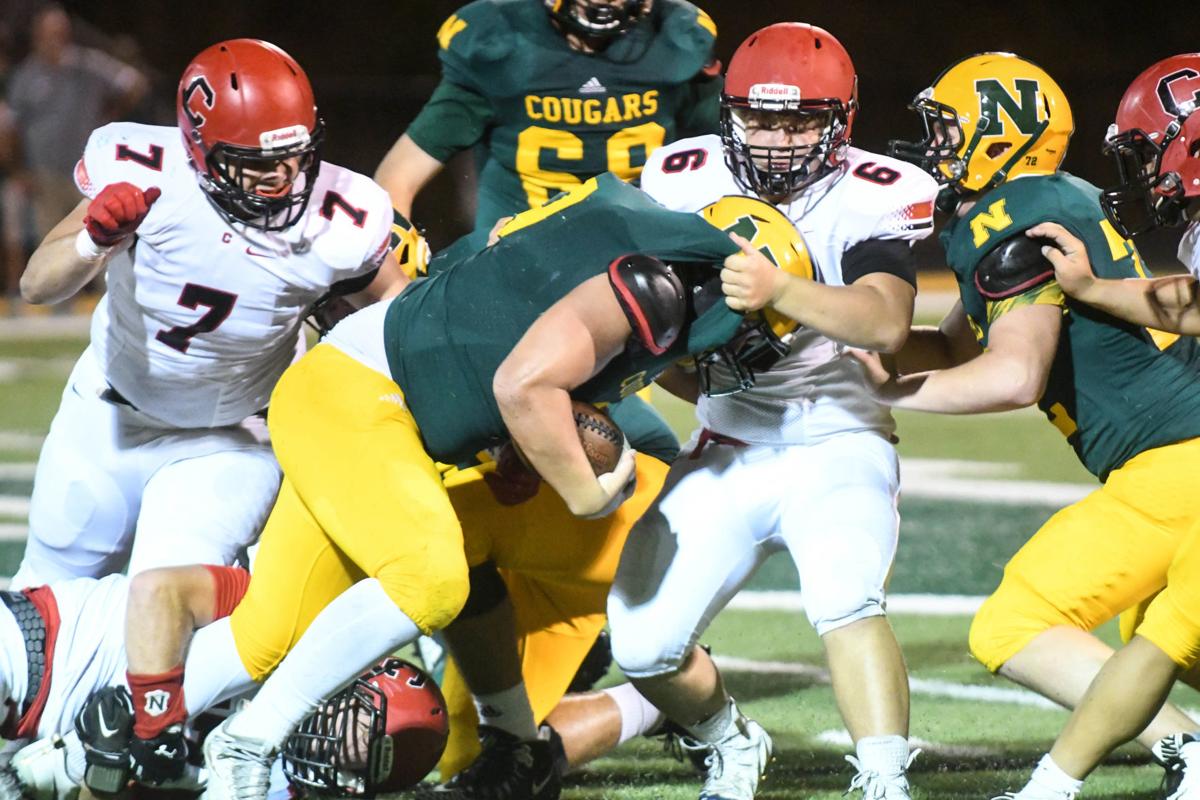 FILE — Cocke County’s Hunter Ellison (6) and Stiles Moore (7) bring down a Northview Academy rusher during the Fighting Cocks’ week 2 victory over the Cougars.

FILE — Cocke County receiver Isaiah Elliott makes a break down the sideline during the Fighting Cocks’ week 3 matchup against South Greene. Elliott had Cocke County’s only touchdowns in Friday’s loss at Tennessee High.

FILE — Cocke County’s Hunter Ellison (6) and Stiles Moore (7) bring down a Northview Academy rusher during the Fighting Cocks’ week 2 victory over the Cougars.

BRISTOL—The end of the brutal gauntlet the Cocke County Fighting Cocks have faced the last six weeks has come to an end.

Unfortunately for Cocke County, it ends in a fifth-straight loss as Tennessee High rolled past CCHS with a 50-14 victory on Friday.

“You look at the schedule and would hope this is the end of it, but we’ve still got three tough opponents left to finish the year with,” CCHS head coach Scotty Dykes said. “We’ve got to come out ready to play and move past this loss quickly.”

Tennessee High (6-1, 3-0 Region 1-5A) enjoyed favorable field position all night long, as the Vikings only had two drives start on their side of the 50-yard-line. They took advantage on all but one possession to find the end zone for six offensive scores and a defensive touchdown.

“That was a big difference in the game,” Dykes said. “We gave them a touchdown on a blocked punt, and wound up giving up 16 points and only 10 yards of offense early on.”

Turnovers became an issue again for Cocke County (1-6, 0-3 Region 1-5A). The Fighting Cocks turned the ball over three times, one of which led to a pick-six in the second half.

“We knew turnovers could be an issue just with how good an athletic they are,” Dykes said. “Our biggest issue came in the first quarter by giving them short fields each possession.

“Credit their defense,” Dykes said. “They’re a talented, athletic bunch. I’ll know more once I’ve seen the film as far as issues we may need to address, but overall they did a great job containing us defensively.”

Despite the struggles, senior wideout Isaiah Elliott had a strong outing. He hauled in the offense’s lone score for 71 yards, and took a 90-yard touchdown to the house on a kick return.

“He had a great performance,” Dykes said. “I was super proud of him tonight. He’s a kid that has gotten better every week. He works hard and that’s what you want to see. Now we need to see more like him.”

Tennessee High continued its trend of showcasing a balanced attack on offense. To make up its 231 total yards for the night, 145 came through the air, and 86 more came on the ground. Junior quarterback Cole McBrayer completed 16-of-19 passes for 133 yards and three scores. Eight players carried the ball for THS to put up the team’s numbers on the ground.

“We weren’t completely prepared to play such a really good team, and that’s on me,” Dykes said. “It’s on me to make sure I’m setting up our guys to succeed, and tonight that didn’t happen.”

Cocke County won the toss for the seventh time this season, but for the first time in 2019 elected to receive. The result was a third down fumble in its own end zone that gave the Vikings their first score of the night.

Tennessee High lived off of short field situations in the first quarter. The Vikings blocked a punt on Cocke County’s third drive of the game that led to a 3-yard rushing touchdown from Kelvin Coleman on the first play of the drive.

Leading 13-0 with 4:24 left in the first quarter, the Vikings’ defense came up with another big play after Reece Proffitt picked off a CCHS pass to give them favorable field position once again. That turnover only led to a 37-yard field goal from Jacob Kraft to extend the lead to 16.

Cocke County’s offense wouldn’t pick up a first down until the last play of the first quarter, but would turn it into a touchdown on the first play of the second quarter when Venerable hit Elliott in stride down the sideline for a 71-yard touchdown strike to cut the Vikings’ lead to 16-7.

Tennessee High would begin its first drive from its own end of the field on the ensuing possession, but still took the ball the distance after McBrayer hit Kelvin Coleman for a 16-yard touchdown to extend the lead back to 16 with 8:27 left in the first half.

CCHS took no time to respond as Elliott struck again. This time the senior took the ensuing kickoff 90 yards to cut the lead back to nine at 23-14.

The Vikings would get two unanswered scores before the half. McBrayer found Jaden Keller for his second passing touchdown of the night, and Isaiah Smith would rush one in from 13 yards out to push the lead to 36-14 before halftime.

Cocke County’s defense opened the second half strong by forcing a turnover on downs to keep THS off the board despite another drive starting in plus territory. However, the Fighting Cocks turned the ball over for the third time of the night that led to a pick-six from Keller that went 28 yards the other way for the score.

The Vikings padded their lead after forcing CCHS to a three-and-out and blocking the punt. THS put together a two play scoring drive that ended with McBrayer connecting with Smith for a 9-yard touchdown pass.

With a 50-14 lead in tow with 8:09 left in the third quarter, the clock was set to run continuously, as that lead held until the final horn.

With the long gauntlet of top teams throughout respective regions over for CCHS, the Fighting Cocks will begin a three-game stretch run to the end of the regular season that will decide their postseason fate.

“We can’t make the playoffs if we don’t win the first one,” Dykes said. “We’re going to come back ready to work on Monday, and put all of our attention on Daniel Boone.”

Full-Time Position: The City of Newport Street Department is accepting