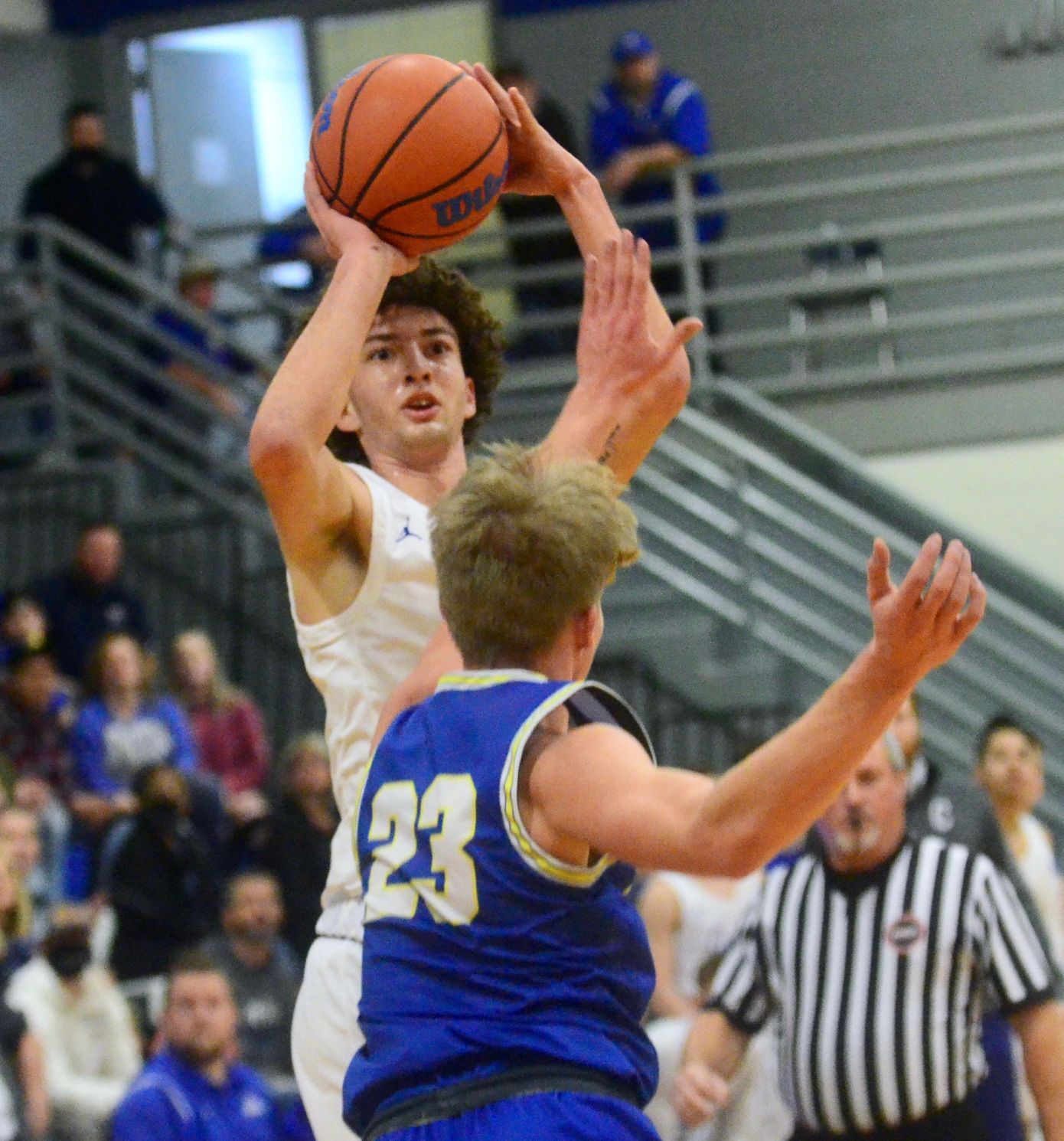 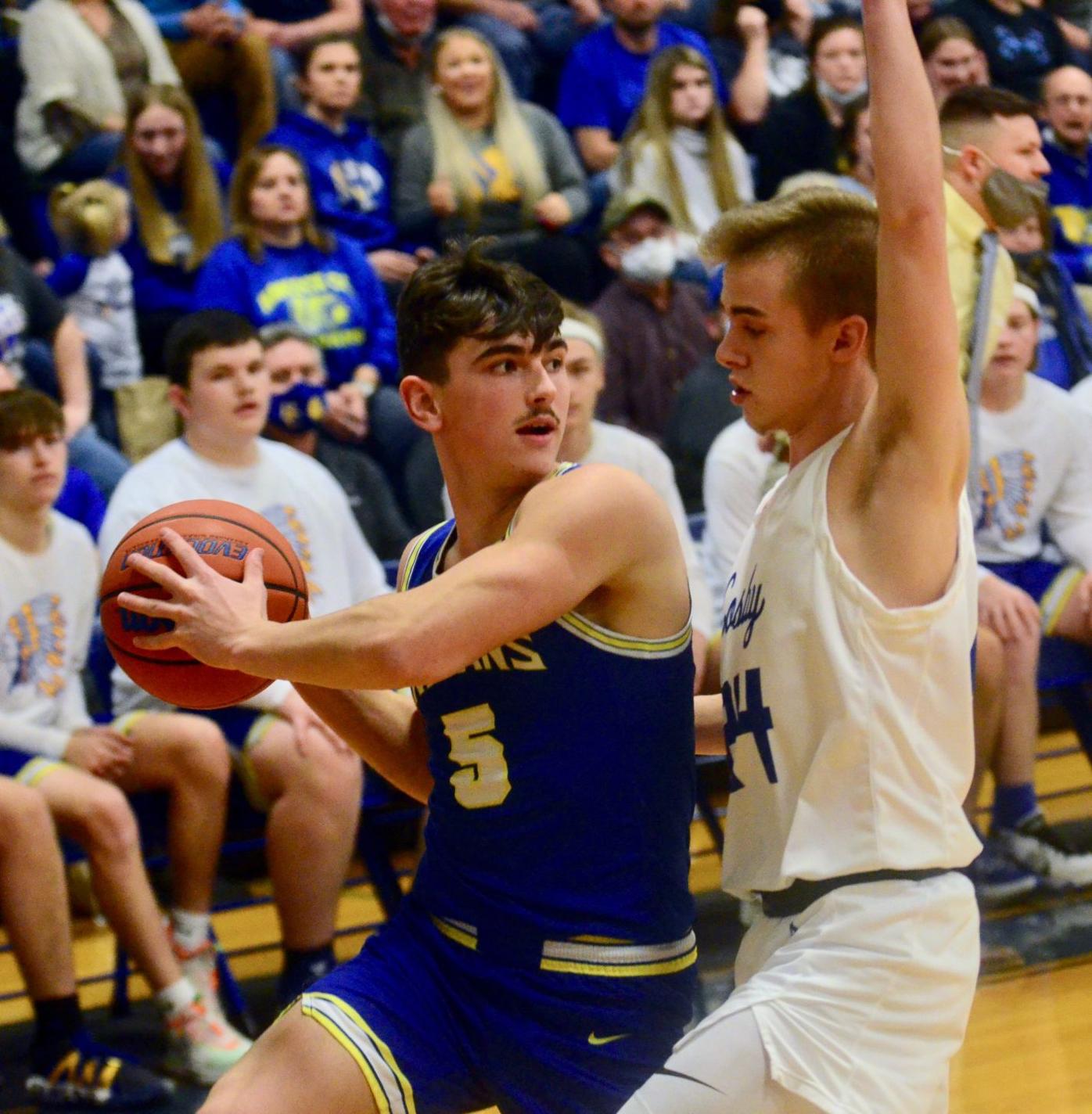 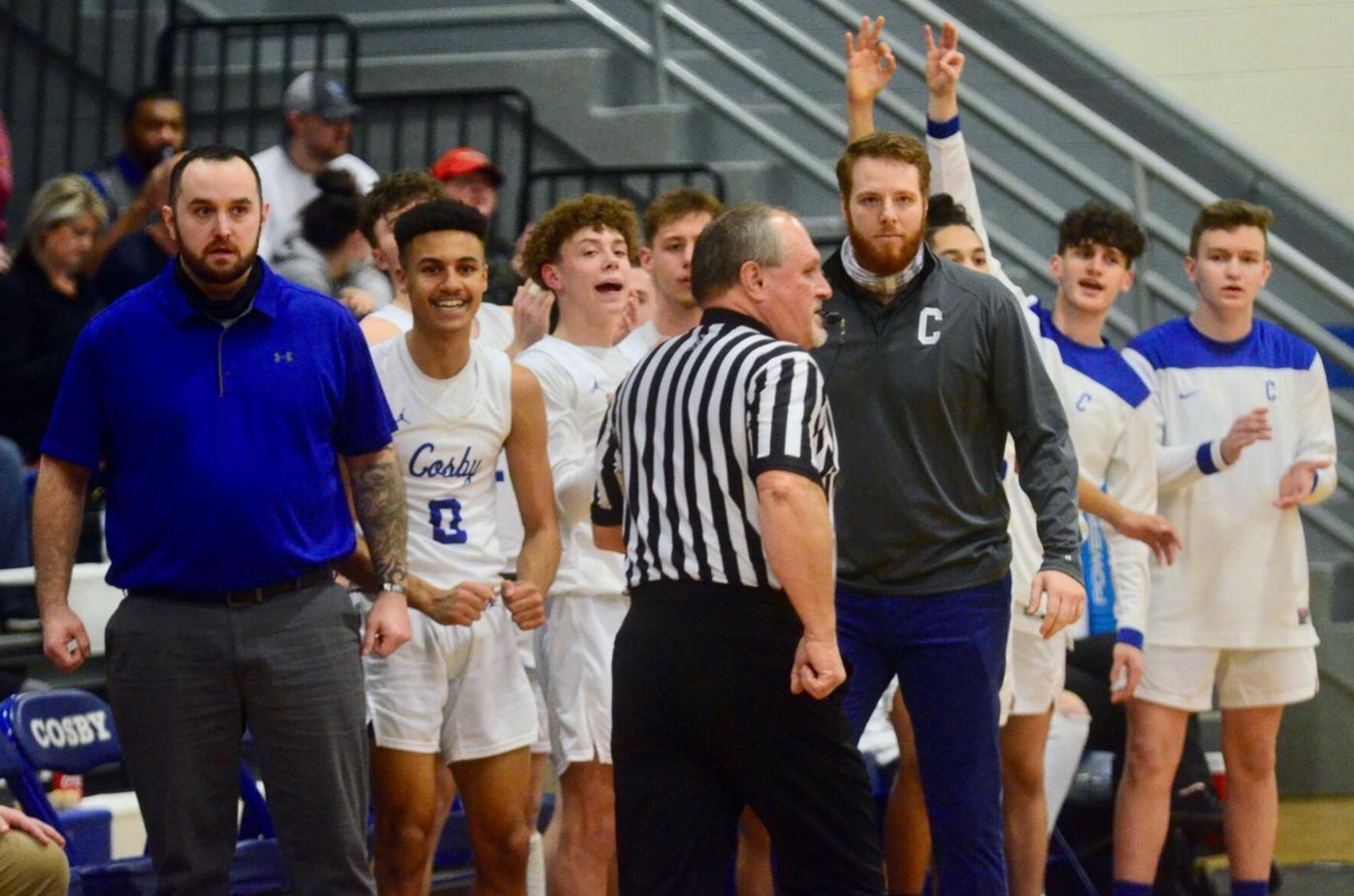 The Cosby Eagles bench erupts in celebration after a made shot on the other end during Tuesday night’s District 2-A Championship game. 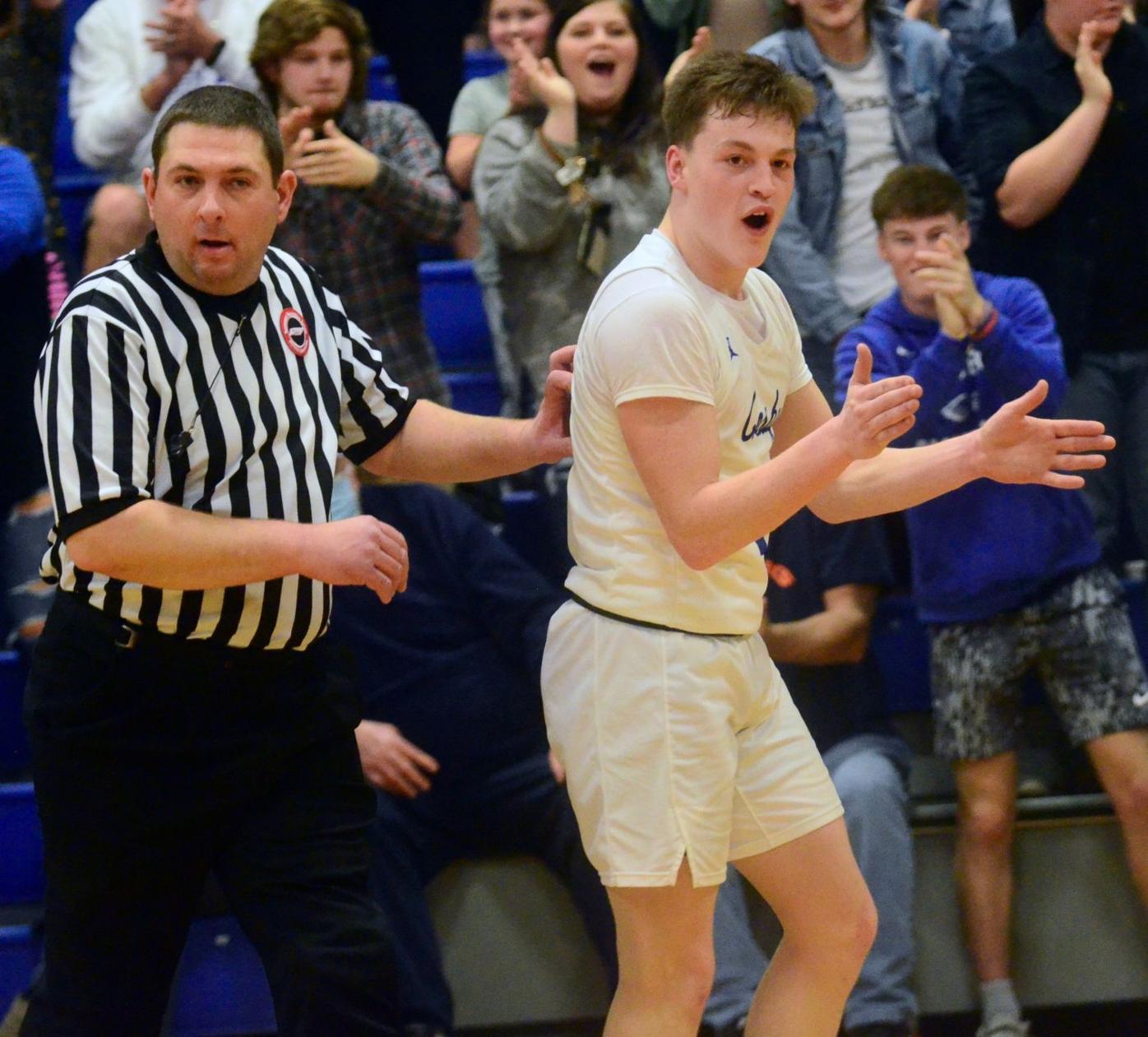 Cosby senior Hunter Workman (right) celebrates as the final buzzer sounds on the Eagles’ District 2-A Championship victory over Hancock County on Tuesday.

The Cosby Eagles bench erupts in celebration after a made shot on the other end during Tuesday night’s District 2-A Championship game.

Cosby senior Hunter Workman (right) celebrates as the final buzzer sounds on the Eagles’ District 2-A Championship victory over Hancock County on Tuesday.

COSBY—Trey Johnson was named a Mr. Basketball finalist for a reason.

The first half of Tuesday’s District 2-A Championship game was proof enough of that.

Johnson put up 28 points at the half, helping the Cosby Eagles pull away for their third connective district title in a 54-45 victory over the Hancock County Indians.

“It makes it a lot easier when he goes out and has games like this,” Cosby coach Kurt Brooks said. “It’d be a disservice to not let him go when he gets in a zone like that. When he’s in that zone, we let him go. He’s a player that’s going to make plays, and he’s a lot harder to guard that way versus us drawing up plays.”

Like most teams this season, Hancock County (11-8) put an emphasis on Johnson to slow him down. Once he popped off for nearly 30 in the first half, the Indians upped their aggressiveness to keep him from finding the basket.

Although it came in the form of scoring just 19 second-half points with only four field goals throughout the final 16 minutes, all that mattered was the Eagles found a way to preserve the lead, continuing their unbeaten reign in league play since Brooks took over.

“Guys had to step up and make plays for us in the second half,” Brooks said. “It speaks volumes about our character and our toughness. We did what we had to do, especially on the defensive end.”

With Tuesday’s win, Cosby will host the Region 1-A Quarterfinals, as well as the region semifinal round should they win in the quarterfinals. The Eagles will play Unaka on Saturday at 7 p.m. A win would set them up to play the winner of Hampton and Jellico in the semifinals.

When both teams met twice in the regular season, they battled through defensive struggles to decide a winner. That was hardly the case when Tuesday’s night’s title bout started.

The two teams combined to put up 34 points in the first eight minutes, with Cosby taking a 21-13 lead.

“We had two slow starts against them during the season, but I could just see a different focus in our guys’ eyes all week,” Brooks said. “We had five points combined in the first quarter of both regular season games. Tonight we come out and put up 21 in the first, which allowed us to hold the lead the whole game.”

Johnson shouldered most of the load for the Eagles. He had 16 points in the first quarter, knocking down three 3-point field goals to start the night.

Cosby also did a solid job on the defensive end, forcing turnovers and tough shots to got on an 8-0 run in the middle of the opening frame, turning a one-point lead into a 16-7 advantage.

Johnson continued his scoring onslaught to start the second quarter, quickly eclipsing the 20-point mark early in the frame.

Before leaving the game, he helped stretch the Eagles’ lead to 15 midway through the period.

Cosby led by 17 late in the half, 32-15. Hancock County pieced together a 7-0 run going into the final minute of the period. Johnson closed the half with an and-1 bucket to make it a 13-point, 35-22 lead going into the half, though. He had 28 points at the intermission.

The Eagles had its two post players in foul trouble early in the second half, forcing them to go small in the third.

Hancock County took advantage of this, consistently pounding the ball inside to utilize its size against a guard-heavy lineup.

One of the Indians’ big men, Chandler Ferguson, picked up his fourth foul with 4:10 left in the third. By that point Hancock County had worked Cosby’s lead down to seven, holding the Eagles scoreless through the first four minutes of the period.

Corey Askew finally broke the drought with a three from the left corner. Paxton Coggins made it back-to-back threes from the same spot on consecutive possessions, quickly jumping Cosby’s lead back up to 11, 41-30, with 2:18 left in the third.

“Plays like those were huge,” Brooks said. “So many teams have crammed the middle all year on Trey, so when you can stick guys like Corey and Paxton on the corners it makes it tough on a defense, and forces them to stretch out.”

The Eagles maintained a double-digit lead going into the fourth, leading 43-32.

Using the free-throw line, Hancock County made it a single-digit game once again with just over five minutes remaining.

For the second consecutive quarter, Cosby was without a field goal in the first four minutes of a period. Johnson had the Eagles’ lone point though the first four-and-a-half minutes of the fourth, which came at the free-throw line.

Askew, again, answered the call with a corner three, this time from the right side, jumping Cosby’s lead back to double digits as the game aged under the three-minute mark.

Johnson’s points production in the second half remained limited to the free-throw line. He continued to produce, though, pushing Cosby’s lead to 11, 51-40, with under two minutes to play.

Hancock County got as close as eight in the final minute, but no closer in the end.

Despite a tough time trying to score in the second half, the Eagles were able to grind out the win, bringing another District 2-A title to The Hill.

“Super proud of our guys for pulling out this win,” Brooks said. “I’m thrilled with the growth I’ve seen from them all year. But now we’ve got to stay focused so we can keep this thing going.”