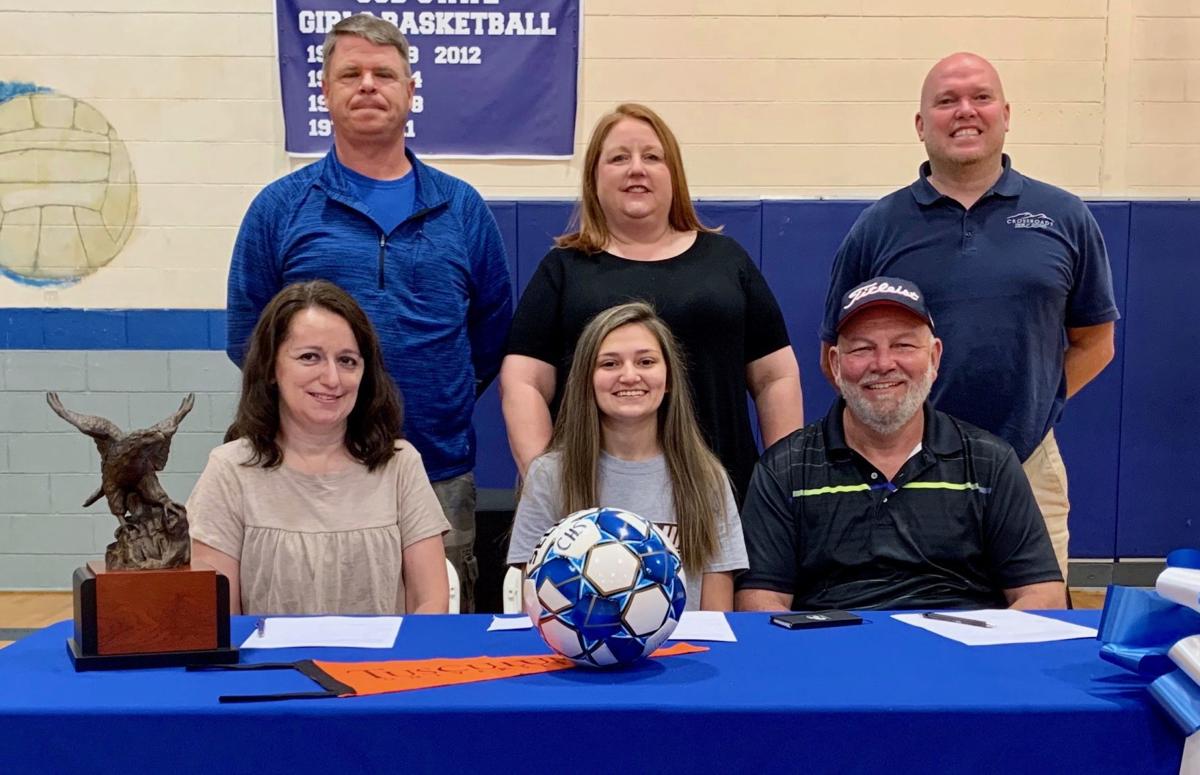 Cosby senior and Tusculum women’s soccer signee Maggie Humphrey (front-center) is pictured above during her signing day ceremony with her coaches and parents. 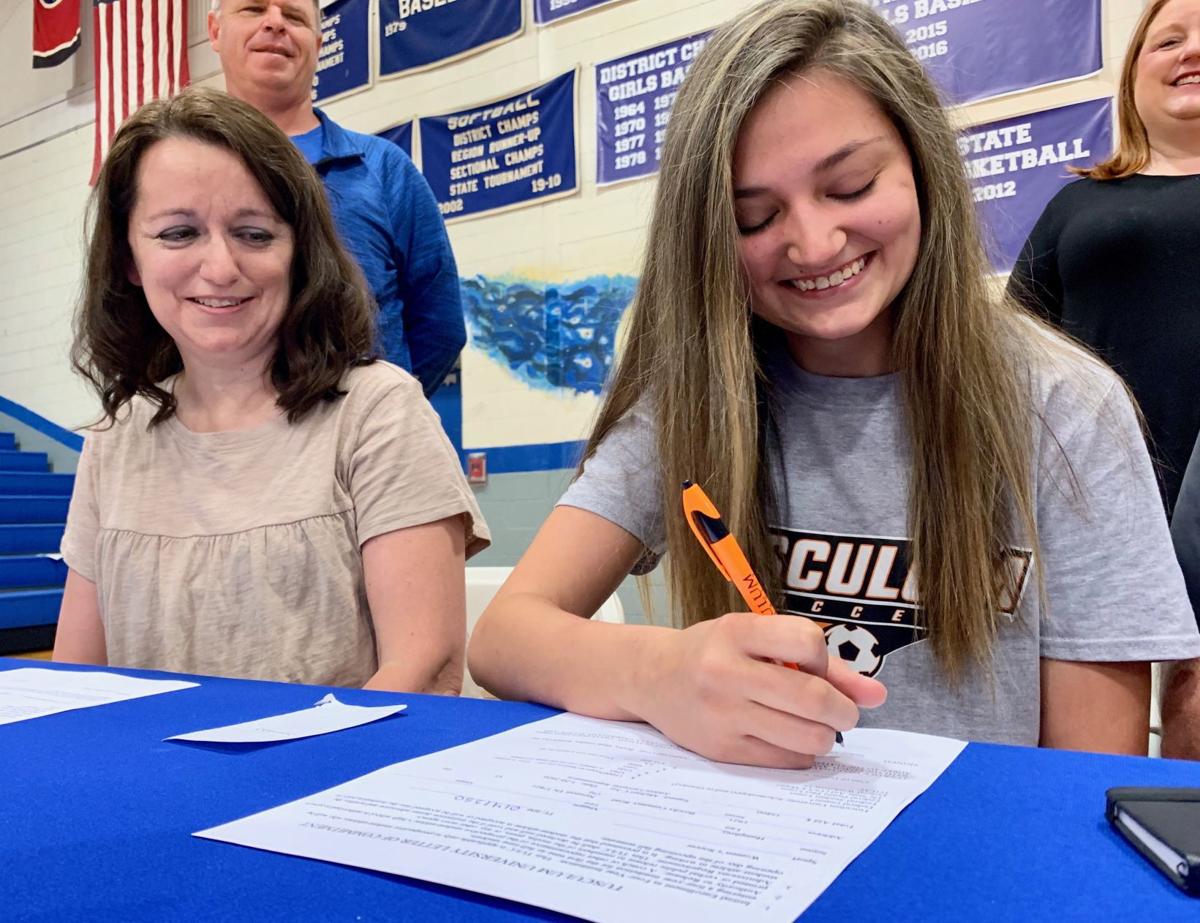 Maggie Humphrey signs her letter of intent for Tusculum University during her signing day ceremony at Cosby High School.

Cosby senior and Tusculum women’s soccer signee Maggie Humphrey (front-center) is pictured above during her signing day ceremony with her coaches and parents.

Maggie Humphrey signs her letter of intent for Tusculum University during her signing day ceremony at Cosby High School.

COSBY—When all is said and done, graduating senior Maggie Humphrey will leave behind an impressive legacy of firsts with Cosby High School.

Before receiving her diploma over the weekend, Humphrey made her future intentions clear by signing her letter of intent to join the Tusculum University women’s soccer program this fall.

“To me personally, getting to this point has been a dream come true,” Humphrey said. “To be honest, I never thought soccer would be the sport that I’d sign a scholarship to play in college. Coming into high school, though, I found out soccer was my sport. I’ve been dedicated to it ever since.”

Humphrey has been a natural on the pitch since donning a Lady Eagles’ uniform her freshman season. She leaves behind an unrivaled resume with a long list of accolades, which include the program’s first region championship and first ever trip to the TSSAA State Tournament in Murfreesboro, Tenn.

Along with that list of firsts, Humphrey also became the first college soccer signee during head coach Michelle Lane’s time as the program’s leader.

“I feel like I definitely left my mark on Cosby High School,” Humphrey said. “Being Mrs. Lane’s first signee as a coach is really special to me, too. These last four years have been incredible.

“Being able to say I was a part of the program’s first region championship team and first team to go to state is truly a special feeling. Now I get to add that I ended that year by signing to play in college.”

Humphrey was a four-year starter with the program, and helped lead a stingy back line of defense that posted 26 clean sheets during that time, 10 of which came in the team’s most successful season to date.

“Days like this makes every bit of coaching worth it,” Lane said. “Makes all the work and long hours worth it. Maggie’s a beast. She’s phenomenal on defense but could play any position we asked her. I’m so proud of her and what she’s been able to accomplish. It’s been a pleasure to coach someone like her.”

Instead the Lady Eagles embarked on the most successful run the program has seen since its inception in 2005.

Over the last three years the program has made a pair of district championship appearances, won 39 games as compared to 15 losses, and secured the program’s first piece of hardware with a region championship win over Alcoa in 2019 before going on to play into the state semifinals at this past season’s state tournament.

“I’ve been playing with these girls for as long as I can remember,” Humphrey said. “I always knew that once we got to high school it would be our time to shine. I never expected we would have gone this far, or that I would get to experience some of the incredible moments I have with this team during my time here.”

Humphrey, along with the rest of the back line of Cosby’s impeccable defense will leave a hole needed to be filled before moving forward going into 2020. With Humphrey, though, she leaves behind more than just a position on the team’s defense.

“She’s a leader, both on and off the field,” Lane said. “She portrays the epitome of what you’d expect a captain and a leader to be. She’s a fierce competitor and one you can always depend on.

“This team will miss her athletic ability, but they’ll miss her leadership more.”

The Cosby girls’ soccer program still has a ton of talent returning for the 2020 season, though, leaving a good chance that Humphrey isn’t the last player to play for Lane that will sign papers to play at the next level.

“Next year I hope to see three or four more doing this,” Lane said. “Whether I’m coach or not, I’ll still consider these girls as one of my own. I’ll always celebrate the accomplishments of Cosby High School, because that’s what we’re here for. We’re here to make them better women and future leaders. Playing ball is just a small piece of it.”

“Being able to say I was a part of the program’s first region championship team and first team to go to state is truly a special feeling. Now I get to add that I ended that year by signing to play in college.”