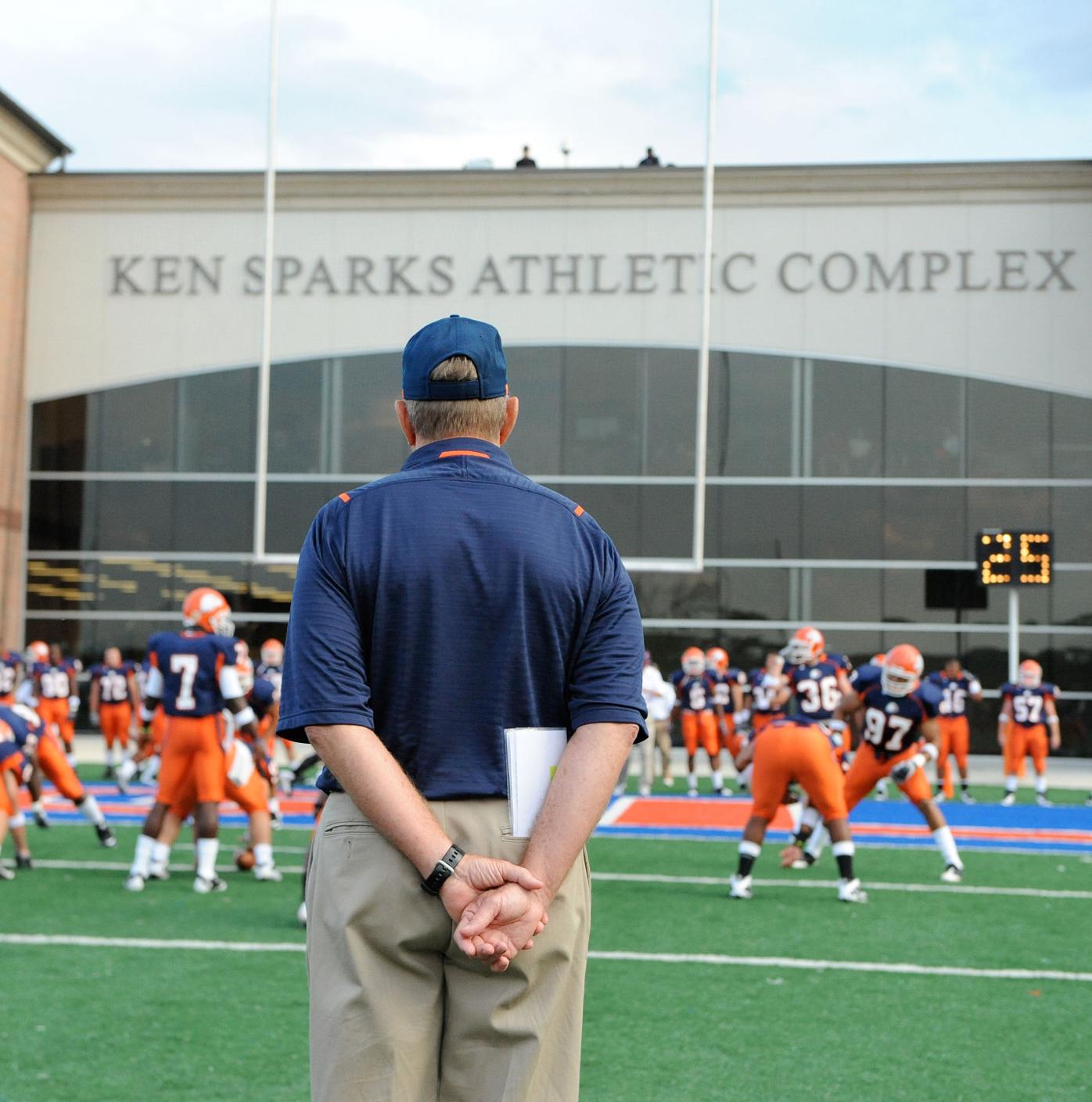 Carson-Newman football coach Ken Sparks, who watches over pregame warmups during a 2008 game in front of the football complex that bears his name. 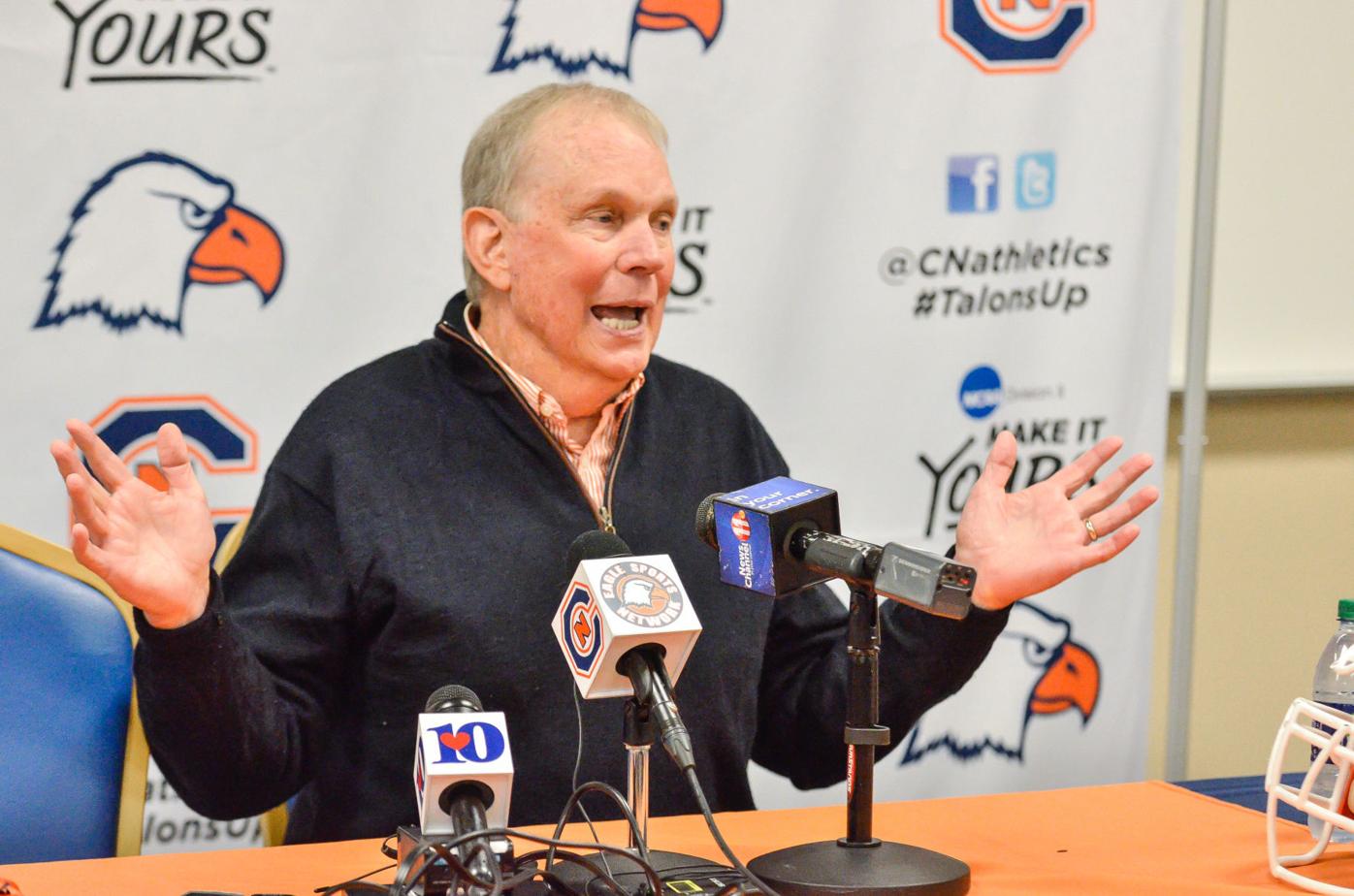 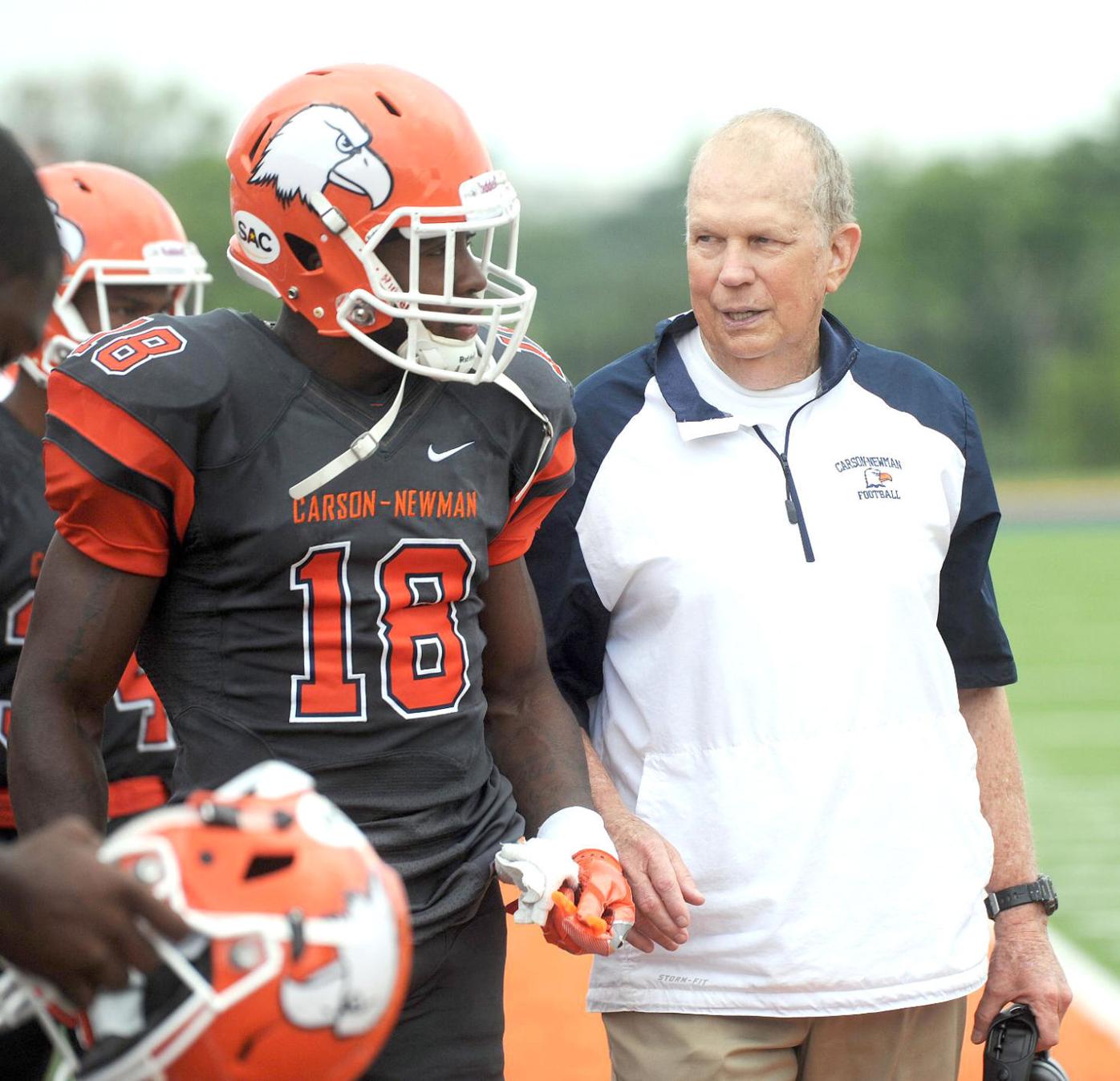 Carson-Newman football coach Ken Sparks (right) talks with senior defensive back Kevin Snead during a game in the 2016 season. Sparks passed away on Wednesday morning following a five-year bout with cancer.

Carson-Newman football coach Ken Sparks, who watches over pregame warmups during a 2008 game in front of the football complex that bears his name.

Carson-Newman football coach Ken Sparks (right) talks with senior defensive back Kevin Snead during a game in the 2016 season. Sparks passed away on Wednesday morning following a five-year bout with cancer.

PIGEON FORGE—Legendary Carson-Newman football coach Ken Sparks, who passed away at the age of 73 on Wednesday, was inducted into the Fellowship of Christian Athletes’ Hall of Champions at the C-N Championship Coaching Clinic earlier this month.

Sparks passed a long a message for his son Chad to tell the crowd assembled at the event.

“This life is not about this life,” the young Sparks relayed to the crowd assembled. “With this exception, we secure eternal glory for ourselves and as many others while we are here. That happens only if we seek the Lord.”

Sparks’ fingerprints were all over the clinic he established in the mid-1980s.

Ole Miss head coach Hugh Freeze, former NFL coach Chan Gailey and Miami Dolphins offensive coordinator Clyde Christensen have all seen their lives impacted by the man who spent all 37 of his years as head coach on the banks of Mossy Creek.

All three prominent coaches were on hand to speak at the C-N coaching clinic in large part because of Sparks.

“I never had the fortune to work with Ken, like so many of us have in this business,” Gailey said. “I first met him through FCA, but really got to know him by speaking at these clinics. It’s been a wonderful opportunity to get to know an even more wonderful man.”

Much like Gailey, Christensen also first encountered Sparks at an FCA retreat. It wasn’t long before Sparks was asking him to make his way to East Tennessee to speak.

Sparks announced his retirement on Nov. 14. He finished his Carson-Newman career after 37 seasons, 338 wins, 99 losses and two ties. His career winning percentage of .7699 is the fourth highest in college football history while the 338 victories amount to the fifth best total nationally.

Freeze first met Sparks when he was the head coach at Briarcrest Christian School in Memphis when Sparks was speaking to a small group he was in at a clinic at the University of Memphis. Freeze called Sparks the first college coach that he had ever interacted with who was truly faith-based.

“I could tell there was something unique about him,” Freeze said. “I was drawn to that. He’s an incredible role model. I followed the wins, but the things that you here that really stand out are the players who come back and say such great things about him after 20 years. To emulate a man like Ken Sparks is a lofty goal, but he’s someone I strive to be like. He’s a giant because of his coaching. And, he’s a giant because of his faith.”

Sparks developed one of the winningest football programs in the history of the sport. The Eagles won five NAIA National Titles and played for it six times. A move to NCAA Division II didn’t slow Sparks’ Carson-Newman squad down. The Eagles played for the D-II National Title three times and were a semifinalist in 2009.

“When you look at people and you say, ‘How do you know they’ve done right?’” Gailey said. “The answer to that is if you hear no wrong. Word gets around in our business. For nothing ill to be spoken of Ken that means that he’s done right for a very long time.”

The rest of the numbers speak for themselves as Sparks has recorded 21 South Atlantic Conference Championships, 25 NCAA or NAIA playoff appearances, 104 All-Americans, and most recently, a street renamed after him that runs through the middle of Carson-Newman’s campus.

“I use his phrase about the scoreboard all the time,” Freeze said. “You don’t have to define yourself by what the scoreboard at the end of the field says. Who we are is defined by how we are viewed in God’s eyes through Jesus Christ. Ken’s so consistent in that message.”

“His faith has been so strong through the suffering of these past five years through the cancer,” Christensen said. “That authenticates him. There’s nothing like suffering and trials that make you see what a man really is. Some men like me fall apart when a little wind blows. To watch him face what he has faced these last five years, and do it with a joy that can only be supernatural and can only come from Christ, that’s a testimony to me. That’s what a real faith should look like and can only be true and authentic. That’s what I want my relationship with God to look like.”

(Editor’s Note: This story was published earlier this month, prior to Sparks’ death this past Wednesday morning.)

“You’re going to have influence, whether you like it or not. Everyone of us is an example of something. We can talk all we want to, but our walk is what tells people who we are.”