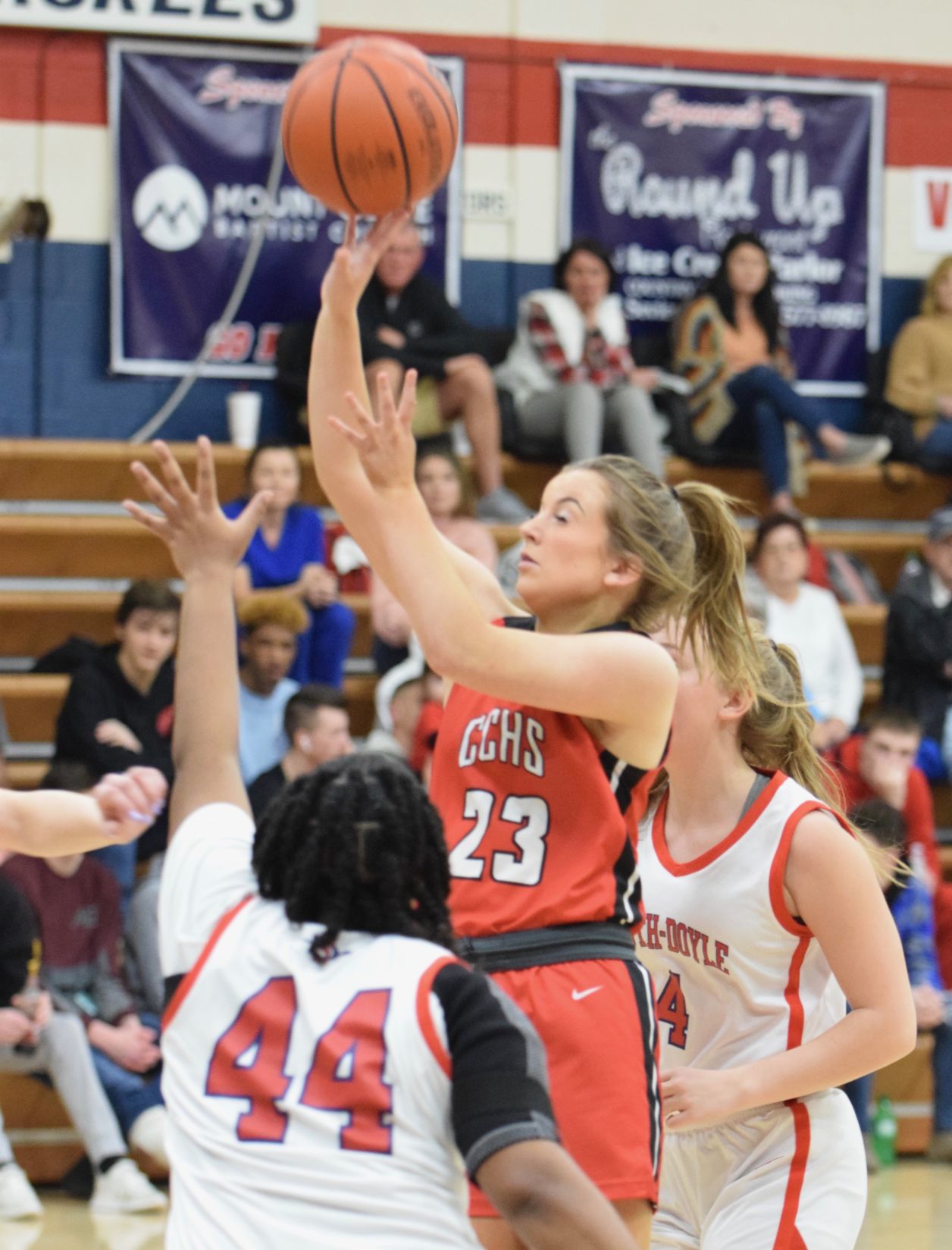 Lady Red sophomore Camryn Halcomb puts up a shot in the paint during Tuesday’s win over South Doyle. 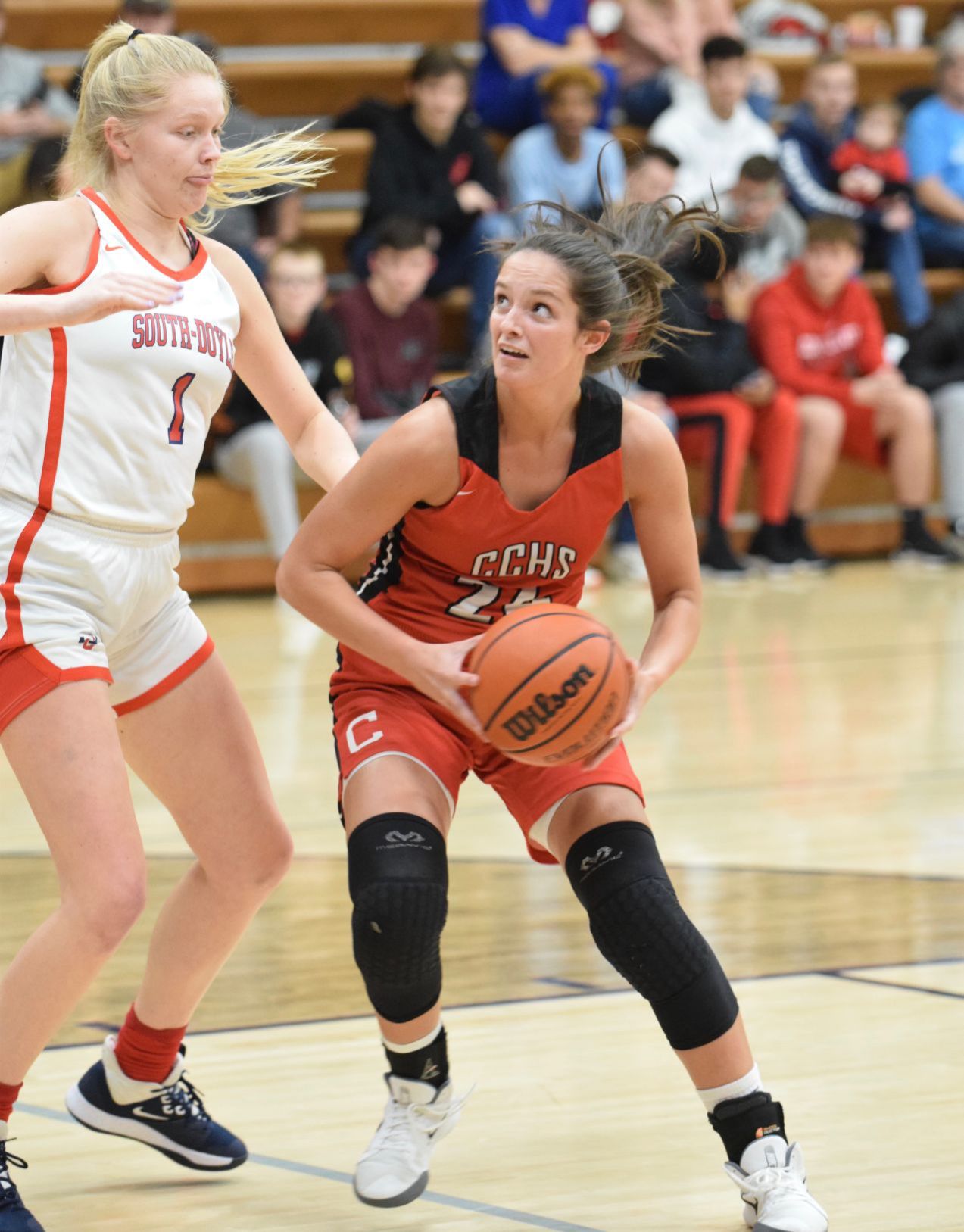 CCHS senior Heavan Baxter eyes the basket from the paint during Tuesday’s matchup at South Doyle.

Lady Red sophomore Camryn Halcomb puts up a shot in the paint during Tuesday’s win over South Doyle.

CCHS senior Heavan Baxter eyes the basket from the paint during Tuesday’s matchup at South Doyle.

KNOXVILLE—Jeremy Byrd wasn’t nearly as frustrated with this win over South-Doyle.

Aside from a slow second quarter, Cocke County displayed how far it has come since a turnover-plagued win against the Lady Cherokees in December as CCHS cruised to a 51-33 triumph on Tuesday night.

The Lady Red (11-8, 4-3 District 2-AAA) turned up the pressure this time, not allowing any points through the first 11 minutes and never allowing the margin to dip below nine points.

“We were just looking more mentally prepared to play tonight,” Byrd said. “Our on-ball pressure was huge because we just made them very uncomfortable with the ball in their hands.”

The strategy was simple, speed up the game and force turnovers to set up transition opportunities. As a result, Cocke County is off to a 3-0 start since the calendar turned to 2020.

As far as scoring goes, Sydney Clevenger led the way with 13 points with nine of them coming from 3-point range. Clevenger knocked down two 3-pointers just 34 seconds apart to begin the scoring, but she remained at six points until the third quarter when she answered a South-Doyle basket with her third triple to make it a 31-18 game. She cracked double digits in the fourth quarter when she converted a steal into a bucket and sank two foul shots as part of a 12-2 run.

Camryn Halcomb didn’t miss a beat after scoring 10 of her 13 points in the second half at Morristown East, scoring six in the first half and joining Clevenger in double figures with 11. She was responsible for Cocke County’s first basket in the paint in the final seconds of the opening quarter, going back door and scoring off an assist from Heavan Baxter. Halcomb added a fast-break layup and answered a South-Doyle triple just 13 seconds later with a left-wing 3-pointer, building a 28-16 lead in the third quarter.

“Camryn is tough. She has really good body language all the time, and she’s improved a lot lately as far as our offensive philosophy,” Byrd said.

Baxter, who finished with 9 points, got her first basket of the second half just 1:15 into the third quarter. And her fastbreak layup with 2:05 left in the game gave the Lady Red a 46-26 cushion. The senior had also knocked down a 15-foot jumper in the first quarter and given CCHS a 15-0 lead with her straightaway 3 in the second quarter.

Jayda Harden was responsible for Cocke County’s seventh and final 3-pointer of the game, coming with 1:30 on the clock for a 49-28 advantage. Her ensuing two free throws made it 51-28 to cap her five-point outing. Oddly enough, Harden didn’t initially want to take her 3-point shot, but she couldn’t resist when Jaylen Cofield passed her the ball.

“I told her I’m not shooting it and she threw me the ball and just told me, and I really wasn’t thinking about it,” Harden recalled. “I just shot it and it really is encouragement from everybody that gets me to work so hard and do what I do.”

Hailey Moore scored a field goal in each of the final two quarters, giving the Lady Red a 33-20 lead after three before going up and under early in the fourth. Gracie Gregg knocked down a 3-pointer from the right corner to begin the final stanza, and she finished with 6 points. Cofield and Paige Niethammer combined for 3 points from the charity stripe.

Teryanna Griffin tried to spark a South-Doyle rally in the third quarter, scoring five of her team-high 10 points and knocking down a straightaway 3-pointer to make it a 25-16 game. But CCHS didn’t allow Griffin to hit another field goal as the rest of her scoring came at the foul line.

MaKayla Pittard helped the Lady Cherokees (3-14, 0-7) close the second quarter on a 6-0 run, closing the halftime deficit to 21-11 as she drove to the basket and sank two foul shots. Her third-quarter basket cut it to 31-20 before the Lady Red answered with an 8-1 run, defeating South-Doyle for the seventh straight time. Pittard finished with 9 points with Aaryanna Billingsley adding 6. Isabella McAnally’s 3-pointer got South-Doyle on the board in the second quarter, but Gregg stole the ball and scored for a 17-3 cushion.

The Lady Red return home on Friday night to entertain Sevier County, with tip-off set for 6 p.m. from the Cocke Pit.