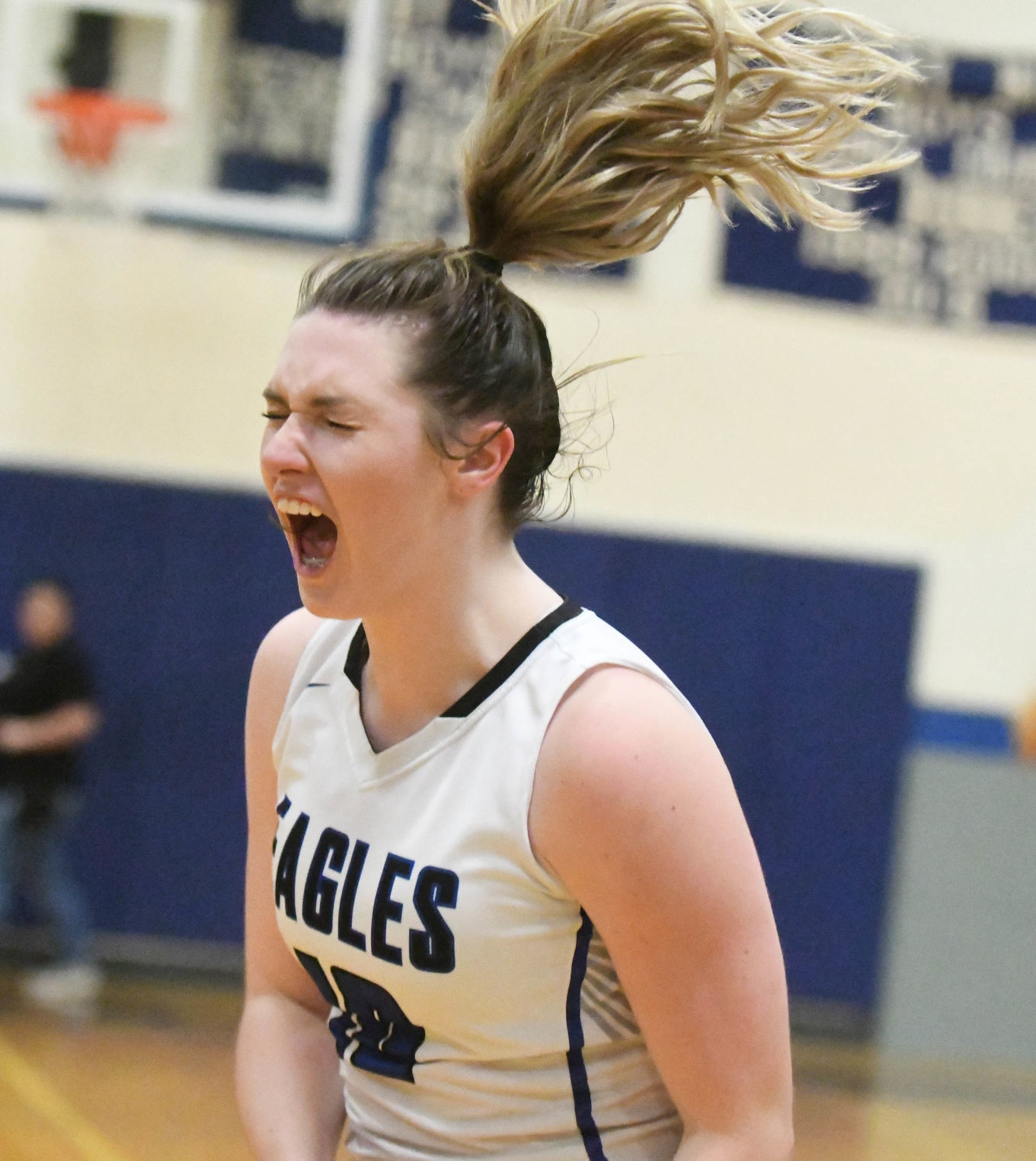 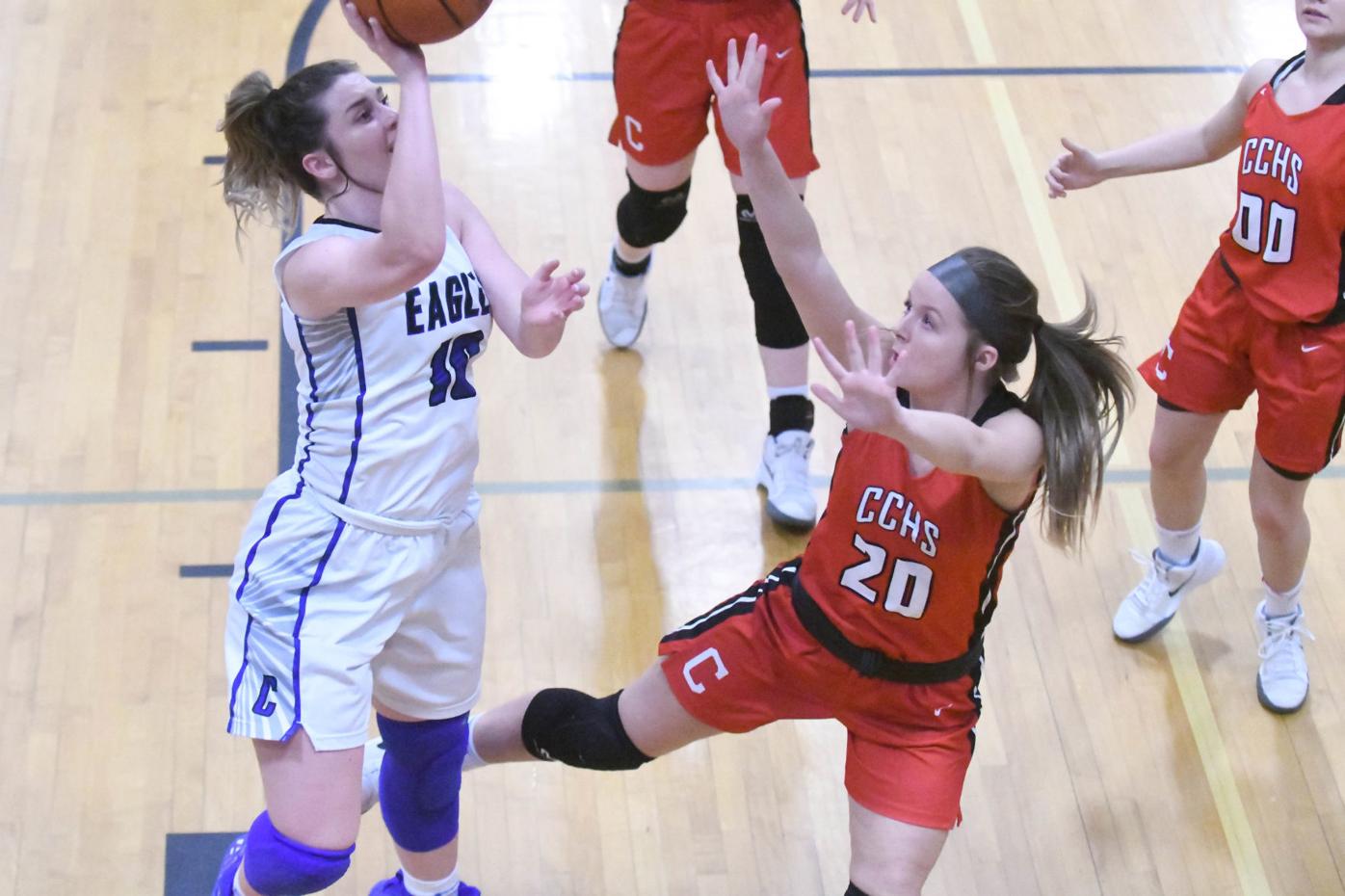 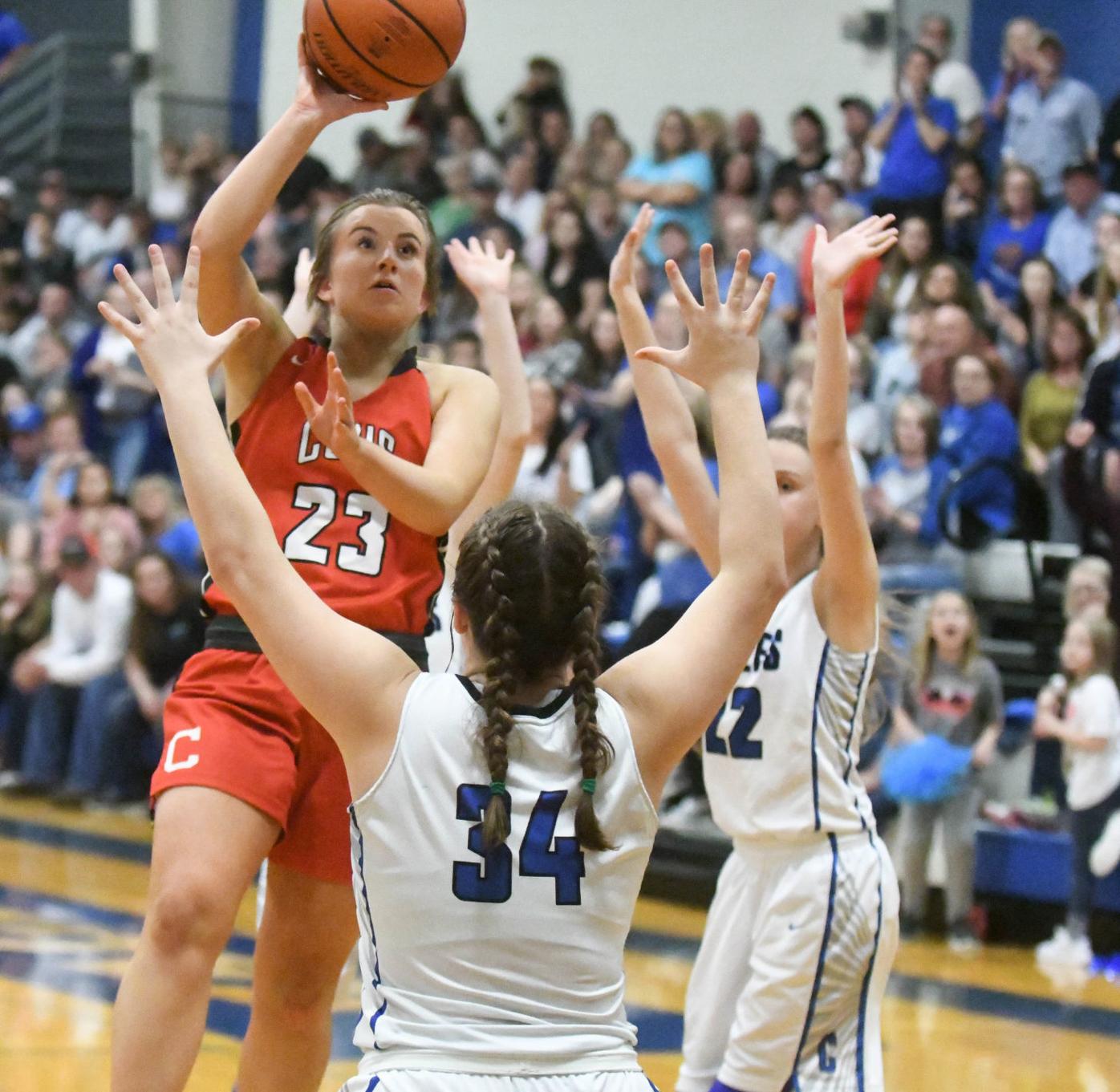 Cocke County sophomore Camryn Halcomb puts up a shot in the lane over a pair of Cosby defenders on Tuesday.

Cocke County sophomore Camryn Halcomb puts up a shot in the lane over a pair of Cosby defenders on Tuesday.

Since the rivalry between the Cosby High and Cocke County renewed in 2016, the Lady Eagles of Cosby have not been able to grab a win. That all changed after a long-fought battle against the visiting Lady Red of Cocke County on Tuesday. Cosby came out victorious, 53-48.

“This game means a lot to not just me,” Cosby’s head coach Cody Lowe said. “It was great to finally get one against Cocke County. Not only does this game mean a lot to me, but it means a lot to the community, the fans, the players, and everyone involved. It’s great to pick up this kind of win.”

The win is a big one for Cosby (15-10), as it marks the Lady Eagles’ first in seven tries over Cocke County (14-11) since the series was reborn in the 2016-17 season, bringing an end to Lady Red coach Jeremy Byrd’s unbeaten record against his inter-county counterpart.

“We ran into a wall tonight,” Byrd said. “I think we weren’t ready. I think we were nervous with the kind of atmosphere we played in tonight. This is a loud environment and we have to take this the right way. It will help us playing down the road after tonight’s environment.”

Bralyn McGaha and Leia Groat led the way for the Lady Eagles’ victory, as Groat scored a game-high 14 points and McGaha followed with 12 points.

It was a long time coming for Lowe, and the way the game went considering foul trouble for each squad, it was a long game to wait for your first win over a program you’ve longed to top.

With a total of 51 fouls, both sides spent a lot of time at the free-throw line. Cosby made 17 of its 30 attempts at the line, while Cocke County hit 20 of its 37 attempts.

“We have to do a better job at the line,” Byrd said. “Free-throws are crucial in any game. This was one of the biggest games on our schedule and we didn’t do that great of a job at hitting our free-throws.”

The Lady Eagles made six of those 17 made free-throws in the final minute, which gave them the edge.

Cosby never trailed in the game, but Cocke County did cut the lead to 45-44 in the final minutes of the fourth. The Lady Eagles stood strong with their lead, though.

“This game started similar to the last game we played Cocke County,” Lowe said. “This time, though, it was us hitting the shots to start the game. We shot it well and we needed all those shots to keep the lead.”

While holding the lead in the final seconds, Cosby was able to knock down six of its final seven free-throws.

In a game that saw 67 tosses from the charity stripe, it was the final shots from the line that secured Lowe’s first victory over Cocke County.

Four triples ignited the Lady Eagles’ start in the first quarter. McGaha knocked down two of the 3-pointers, while Groat and Gracie Johnson made the other two. Johnson hit her second 3 to make it five-straight treys for Cosby.

The Lady Red were within four, but a sixth 3-pointer from the Lady Eagles gave them a 20-11 advantage after one.

Cosby grabbed an 11-point advantage in the first three minutes of the second thanks to a 7-2 run, including another 3 from Johnson.

Cocke County cut the deficit back down to single digits after Sydney Clevenger’s first make from 3-point land. As the lead jumped up and down, Cocke County managed to stay within single digits at the half. Cosby led 31-23 with help from McGaha’s 10 points.

“We had to make some adjustments at halftime,” Byrd said. “We switched to man-to-man on defense and that helped us slow down Cosby’s 3-point shooting. We could never get us a run going on offense, though. We were never able to grab that lead.”

The Lady Eagles entered the second half diving themselves deeper into foul trouble with multiple players with three or more fouls.

“We had silly fouls here and there,” Lowe said. “We had to make the right plays. We had to keep composure. The calls were tight on both sides, but we had to make sure to keep playing our game.”

Cosby never let go of the lead in the third, though, as it led 37-29 entering the fourth quarter.

Cocke County earned itself three-straight trips to the foul line and managed to cut the deficit to four points. Just as the Lady Red pulled momentum, Groat stole it with her make from downtown to fire up the Lady Eagles’ crowd.

“Those last free-throws we took were so big,” Lowe said. “I felt like we were rolling there in the end. We hit some clutch free throws.”

The foul line actually played in the Lady Eagles’ favor in the final seconds of the game, as they knocked down all but one free-throw to seal the win.

Cosby will take Tuesday’s win and hope to build off of it with a tough road trip to Sevier County on Thursday at 6 p.m. Cocke County will be at home to close the week with a key District 2-AAA matchup on the docket against Morristown East on Friday that’s also slated for a 6 p.m. start.