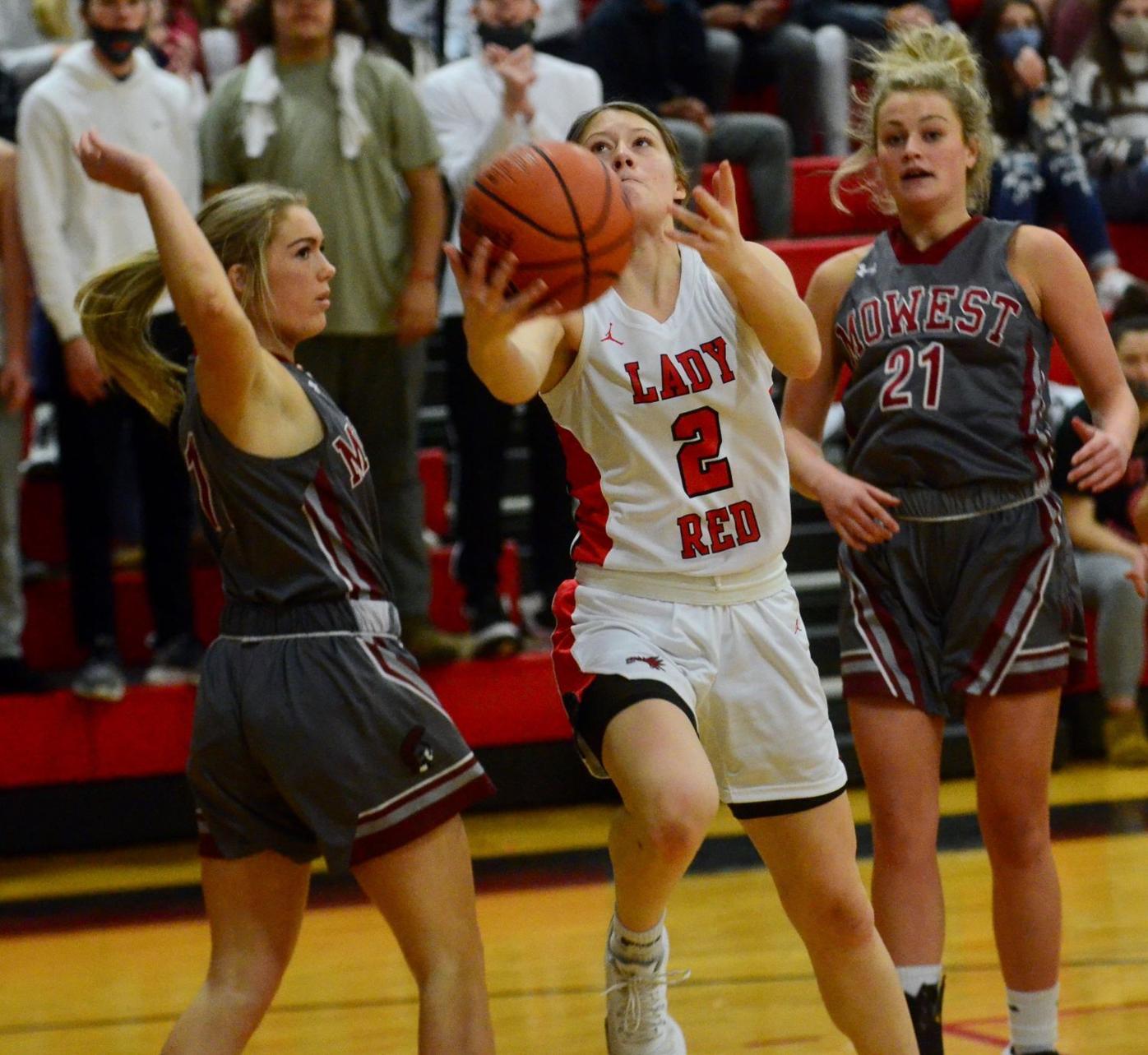 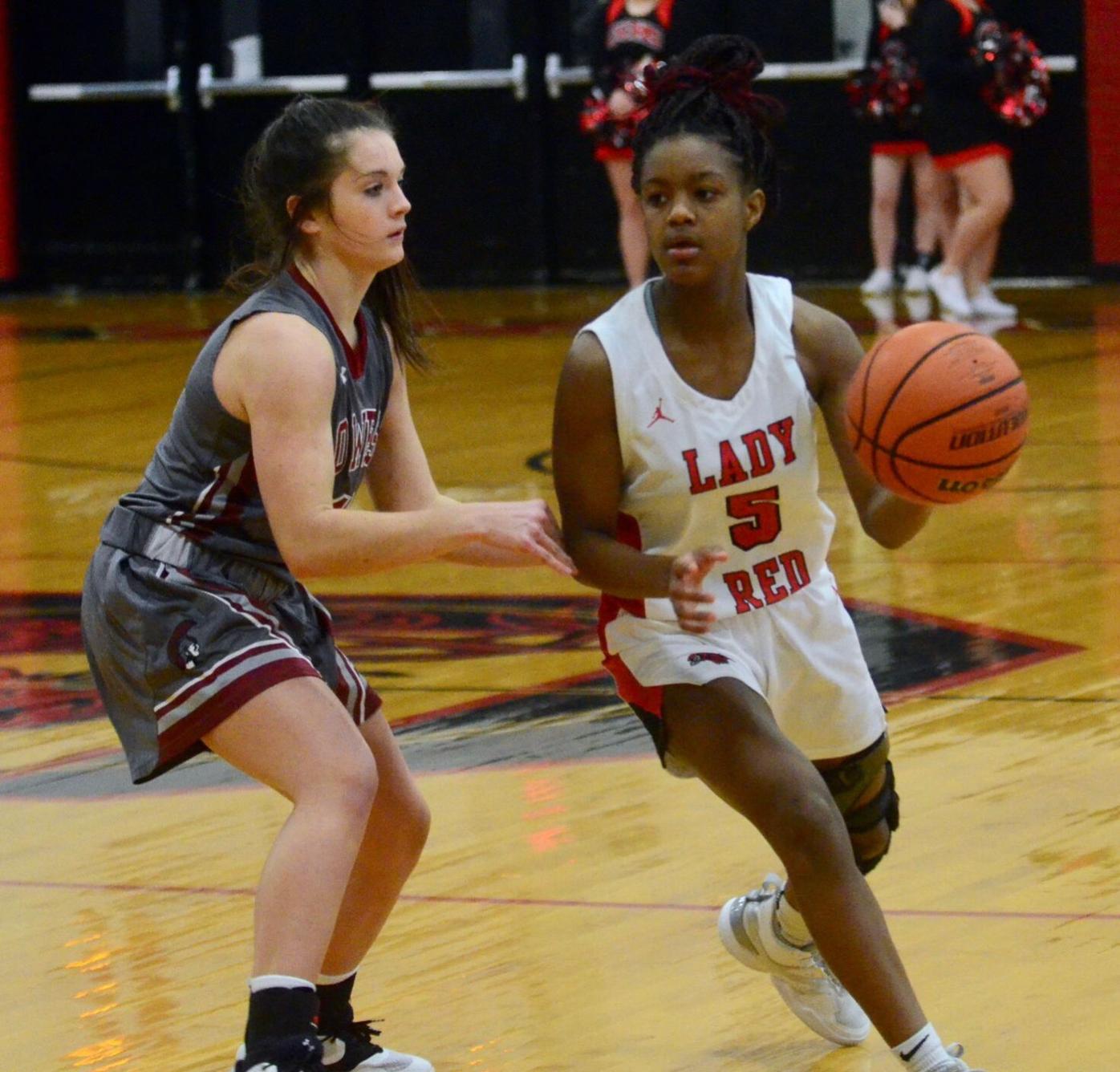 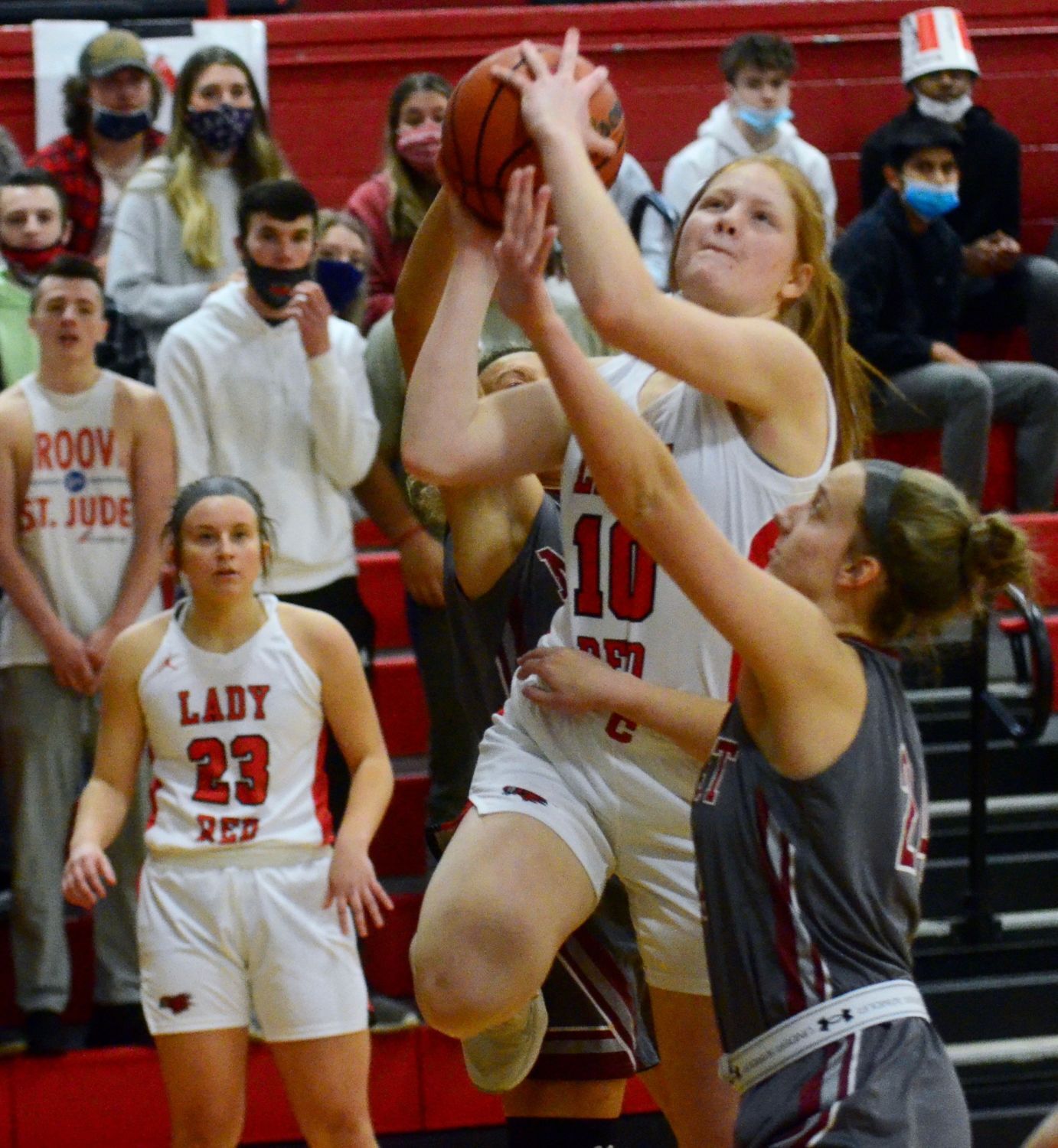 Cocke County sophomore Paige Niethammer rises over a defender for a shot in the lane during Tuesday’s District 2-AAA Quarterfinal against Morristown West. 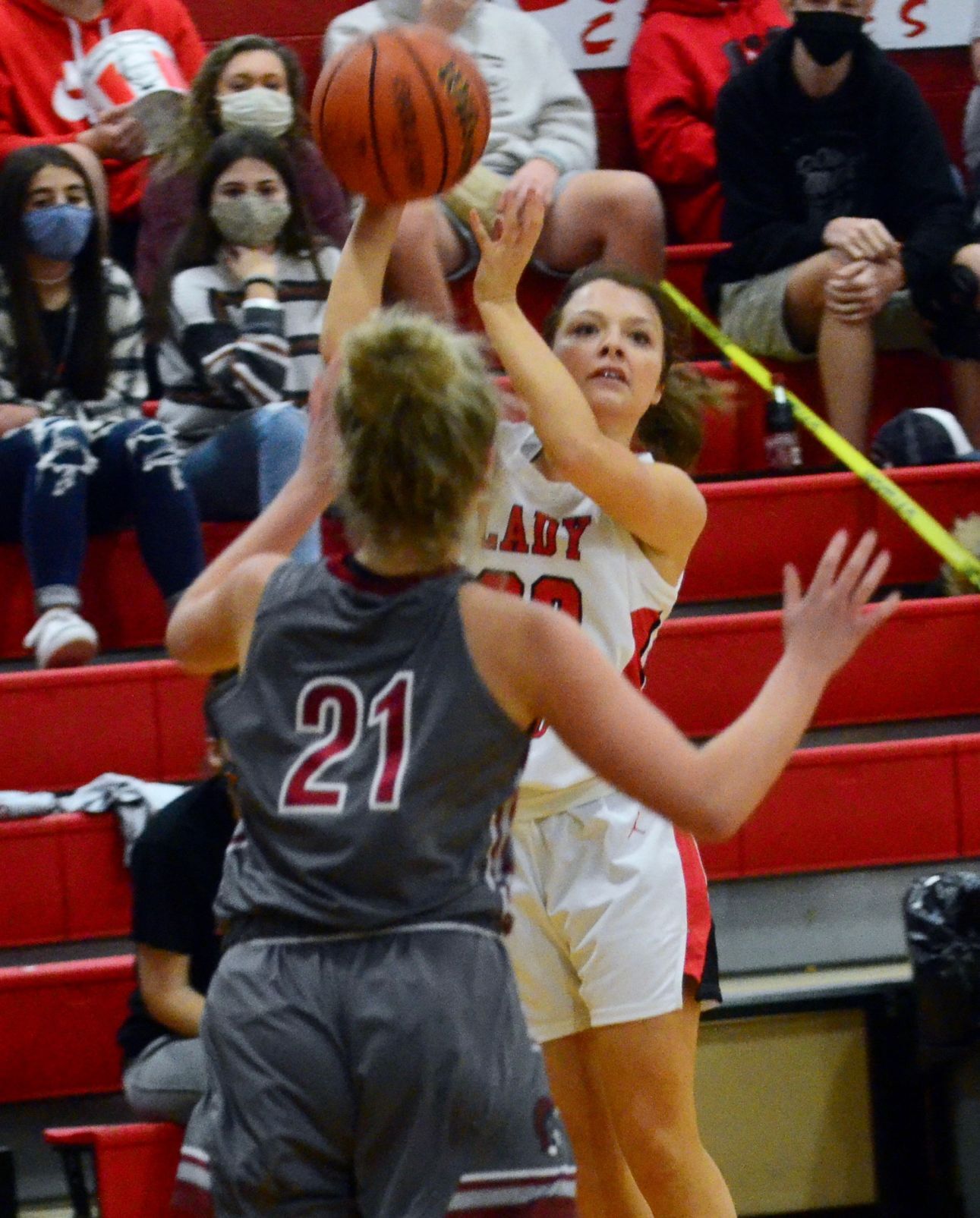 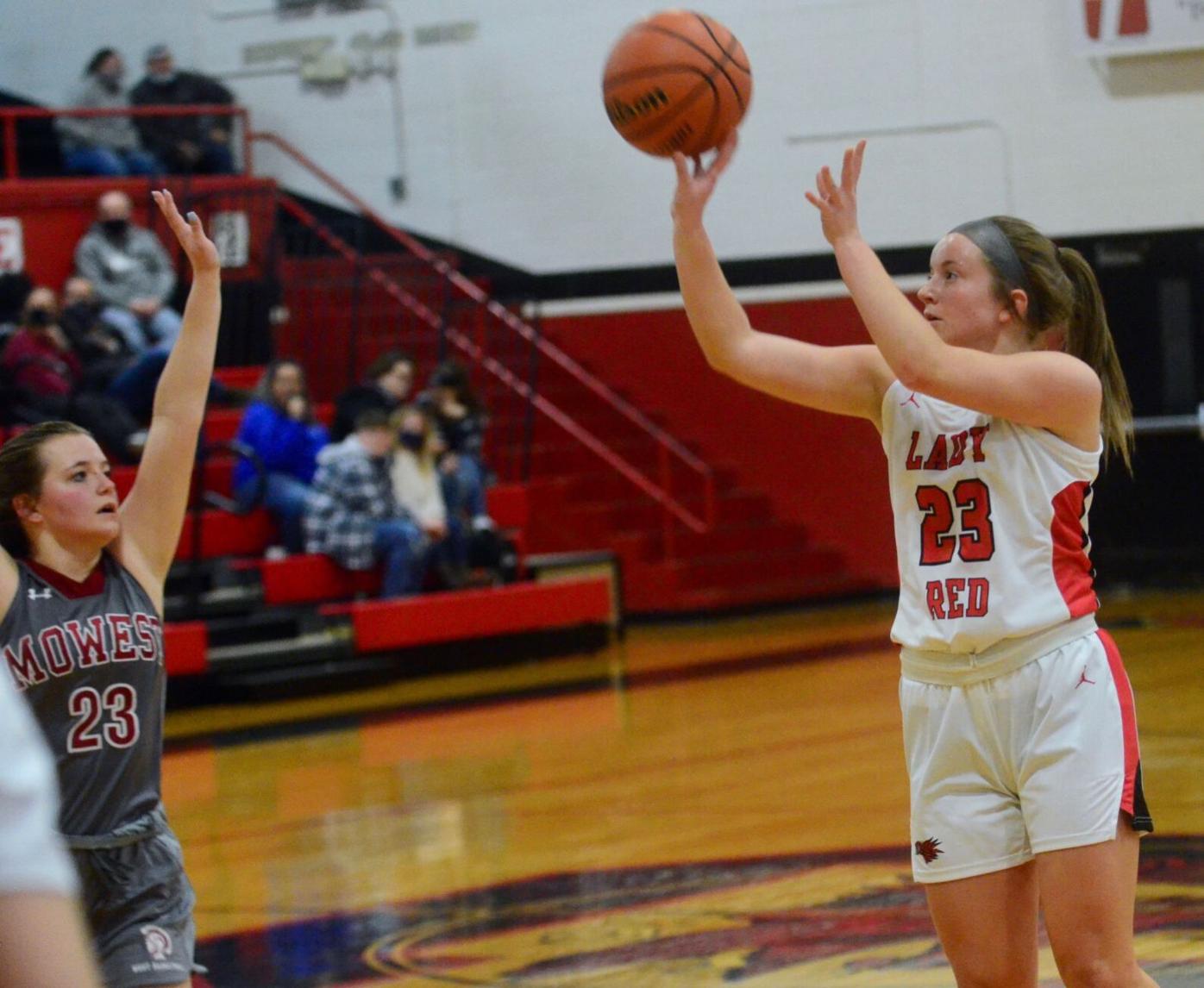 Cocke County sophomore Paige Niethammer rises over a defender for a shot in the lane during Tuesday’s District 2-AAA Quarterfinal against Morristown West.

Also for the second consecutive year, that feat was met with a loss to the Lady Trojans in the postseason. However, this time that loss would come with additional consequences.

After snapping a seven-year drought a season ago, the Cocke County Lady Red’s season came one win shy of a repeat visit to the regional round.

Despite leading early in the final frame, the Morristown West Lady Trojans pieced together a run late in the fourth to push past Cocke County for a 45-40 victory in Tuesday’s District-2AAA Quarterfinals.

The win sends the Lady Trojans on to the district semifinals, and guarantees them a berth in next week’s Region 1-AAA Tournament. Cocke County’s season, however, comes to an early end.

“There’s a lot of hurt in our locker room,” CCHS coach Chris Mintz said. “We hate losing, especially like this, but one of the first things I told them was at least we’re not saying goodbye to anybody. We progressed decently given the circumstances we all faced this year.

“Next year, hopefully we have a summer and will be able to go play and scrimmage before just jumping into the season like we did this year.”

While there’s hardly ever a bright side to a season-ending loss, Cocke County (15-12) still maintains the fact that its entire roster is eligible to return next season.

A team that touted just six upperclassmen, all juniors, during the 2020-21 campaign will return next season with double that amount should the entire roster return next season. Not only should the program have an experienced group for the 2021-22 campaign, but should have a group coming into the year with a chip on their shoulder after Tuesday night’s defeat.

“Anyone that like’s going through this can’t play for me,” Mintz said. “Our girls are upset. I’m upset for them. I hate this time of year when it plays out like this, because you just never know when it’s your night. We just have to come back, get better and work to make sure this doesn’t happen again.”

Morristown West was led in scoring by Nina Lovelace, who finished Tuesday night’s victory with a game-high 15 points. She was joined in double figures by Lexie Howard, who had 10 at night’s end.

The Lady Red had the first four points of Tuesday’s quarterfinal matchup. Morristown West fired back, though, connecting on a pair of threes to spark an 8-2 run to lead by two with just over two minutes left in the opening frame.

Sydney Clevenger gave Cocke County the lead back with a three in the final minute of the period, her first field goal of the night. The Lady Trojans came back with a pair of free-throws on the other end, and finished with their third 3-pointer of the night to take a 13-9 lead into the second.

CCHS dominated the interior for the bulk of its offensive production in the first quarter.

The Lady Red had six points in the paint, having their way early on against a smaller Morristown West defense.

Senior point guard Jaylen Cofield had to leave the game with just under three minutes in the third after picking up her second foul. Her absence affected Cocke County’s ability to continue working the ball inside, allowing the Lady Trojans to get out on a run to end the frame.

Cofield re-entered the game to start the second, immediately providing the Lady Red offense with a boost in the form of a 6-0 run to start the period.

“When she comes to play like that we’re a tough team to deal with,” Mintz said. “She makes our team that much better. When she can get to the hole and create, it makes our offense a whole lot better.”

With just over three minutes left in the half, Cocke County had held Morristown West to just two points to take a 21-15 lead.

Cofield and Neithammer, each with two fouls, were brought to the bench as the final moments of the half played out — keeping both from further foul trouble. Morristown West took advantage of the two starters’ absence, closing the half on a 4-0 run to cut the Lady Red’s lead to 23-22 going into the intermission.

Turnovers were costly in the final minute of the half for CCHS.

Two of them on back-to-back possessions directly led to points in transition for the Lady Trojans, their only points from the field all period.

“That was a big moment in the game,” Mintz said. “We had three on the bench in foul trouble, and I was just trying to get us to the half without making it any worse. That’s probably a decision I wish I could go back and re-do. That ended up biting us in the end.”

Morristown West quickly took the lead to start the second half, as both teams traded baskets in the first few minutes of the third.

Gracie Gregg stepped into a three from the top of the key to give Cocke County a two-point lead midway through the third, but the Lady Trojans answered with four unanswered to once again lead by two, 30-28, with 2:58 left in the third.

Clevenger knocked down her second three of the night, igniting a quick 5-0 spurt to put CCHS ahead 33-30 with under two minutes to play.

Morristown West had answers for each of the Lady Red’s final two baskets, though, knotting the game at 35-35 going into the fourth.

The pace of the game had drastically slowed in the second half, and continued to slow in the fourth.

Cocke County had the first points of the fourth, but not until under six minutes to play. The Lady Red continued to lead by a narrow 38-37 margin, but Morristown West recaptured the lead with under three minutes to play, 39-38.

On the next trip down, Lady Trojans’ Auiah Bunsic banked in a three from the corner to make it a four-point lead for West with under 2:29 to play.

With time continuing to tick away, the Lady Red struggled to find answers to cut into the deficit.

Camryn Halcomb snapped a near five-minute dry spell with a score in transition, cutting West’s lead down to two with 43 seconds remaining. The Lady Trojans left the door open with misses at the charity stripe, but Howard finally stepped up and sunk a pair to make it a two-possession game with 10 seconds left, effectively closing out the victory.

“We just got real stagnant towards the end of the game,” Mintz said. “We weren’t attacking the basket like we were in the first half. Credit to (Morristown West), though. They shifted to a 2-3 zone to keep us from attacking and made it a slower game than what we wanted.”