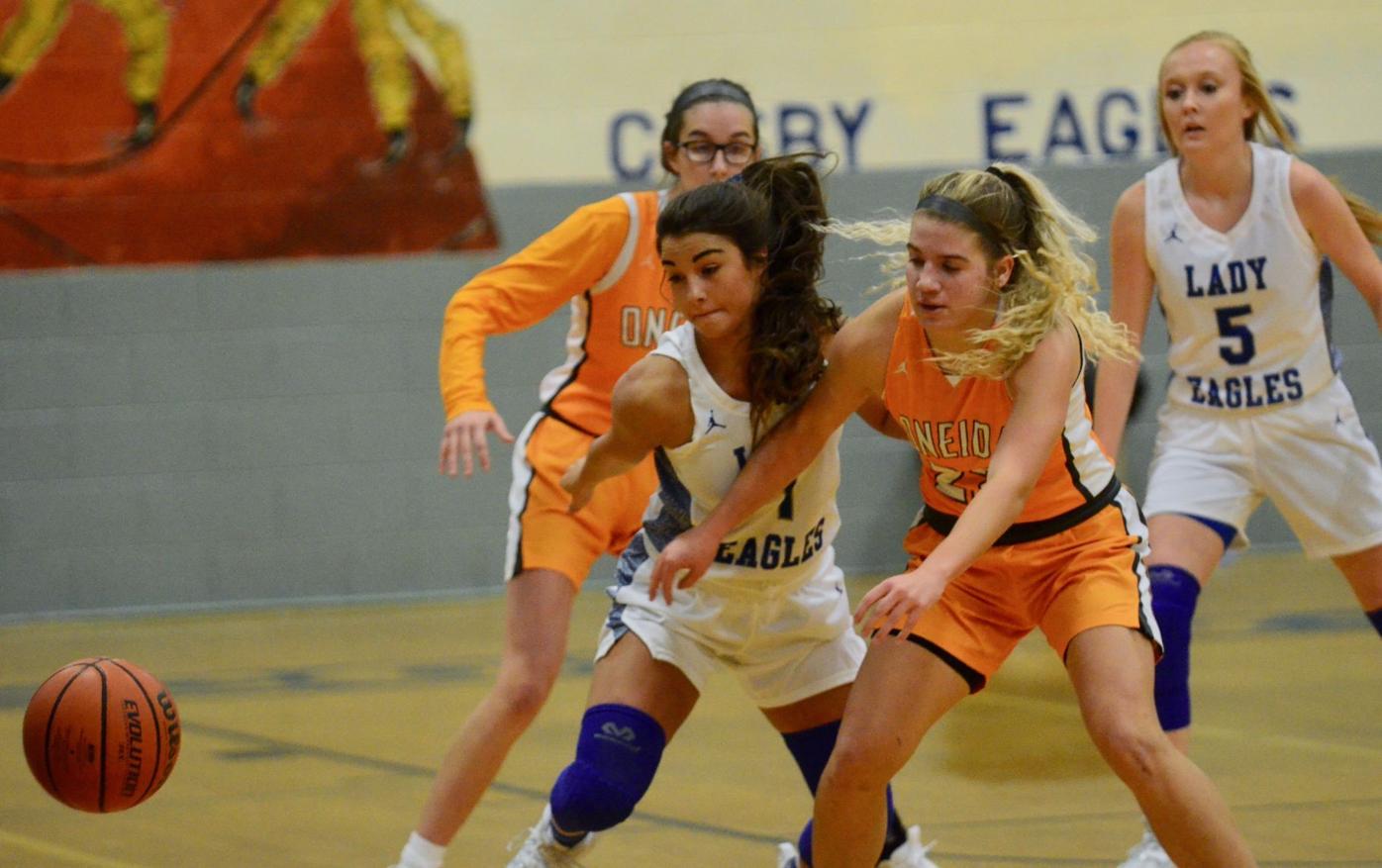 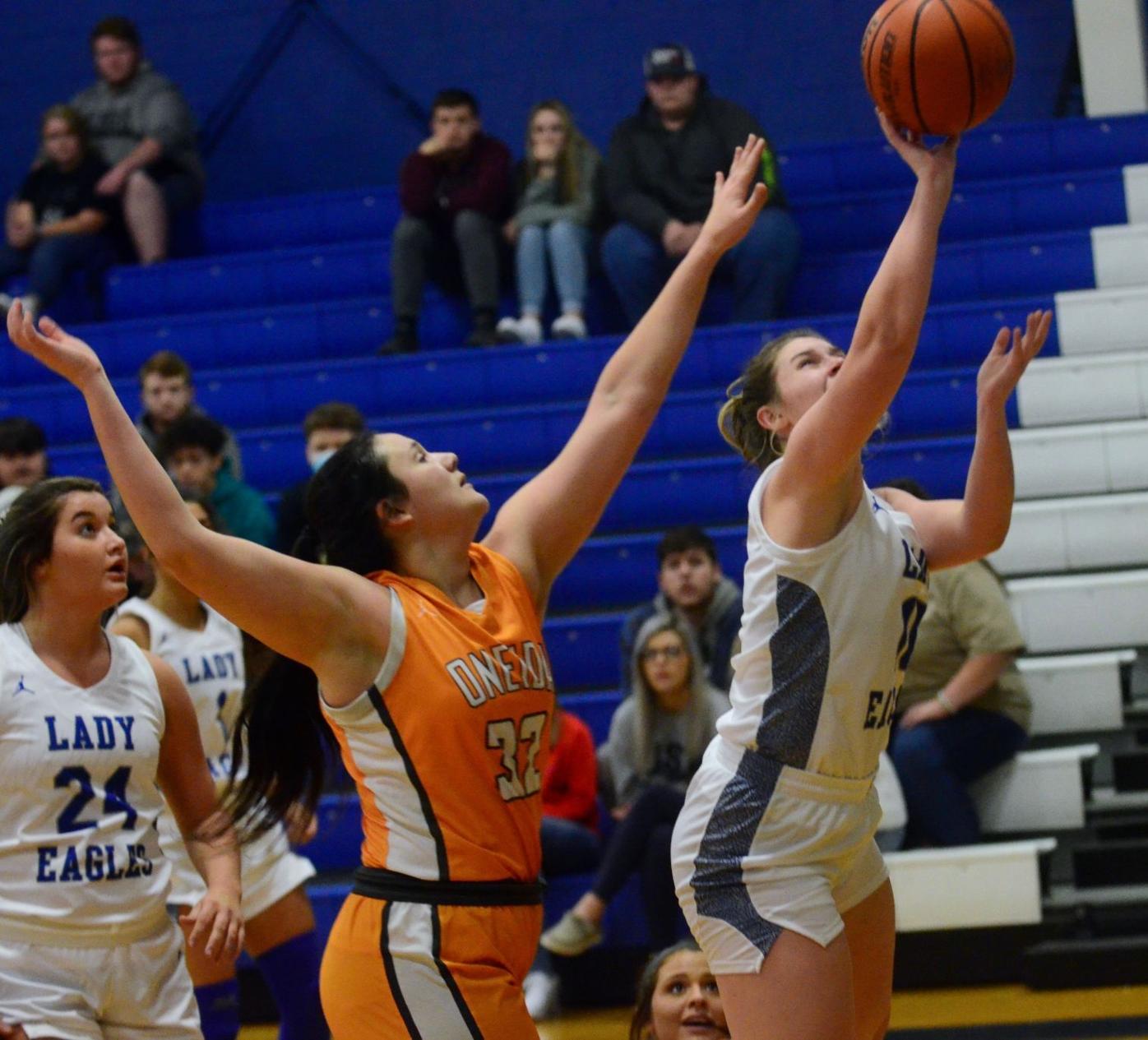 Cosby senior Lauren Ford (right) puts up a shot from the low block on Thursday against Oneida. 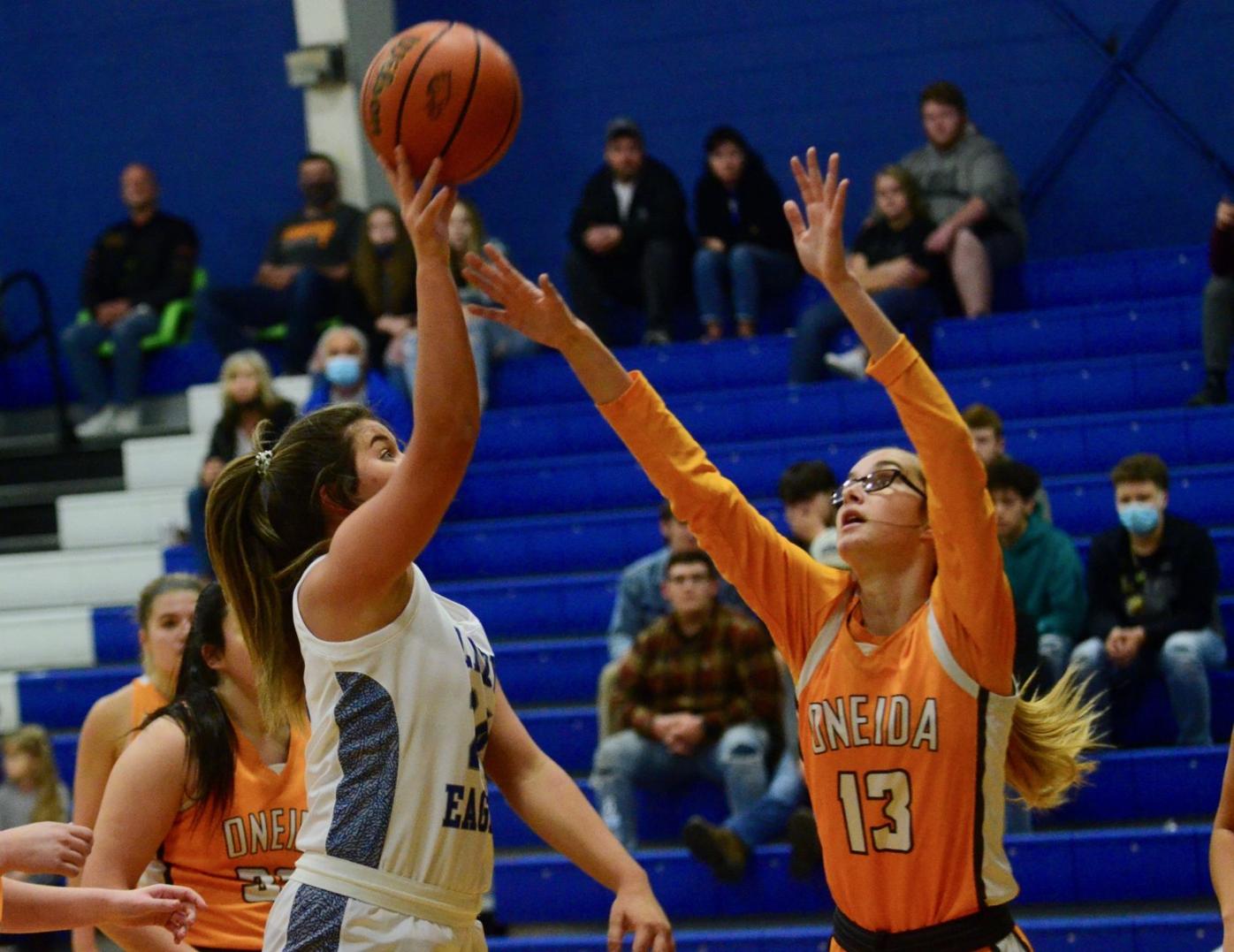 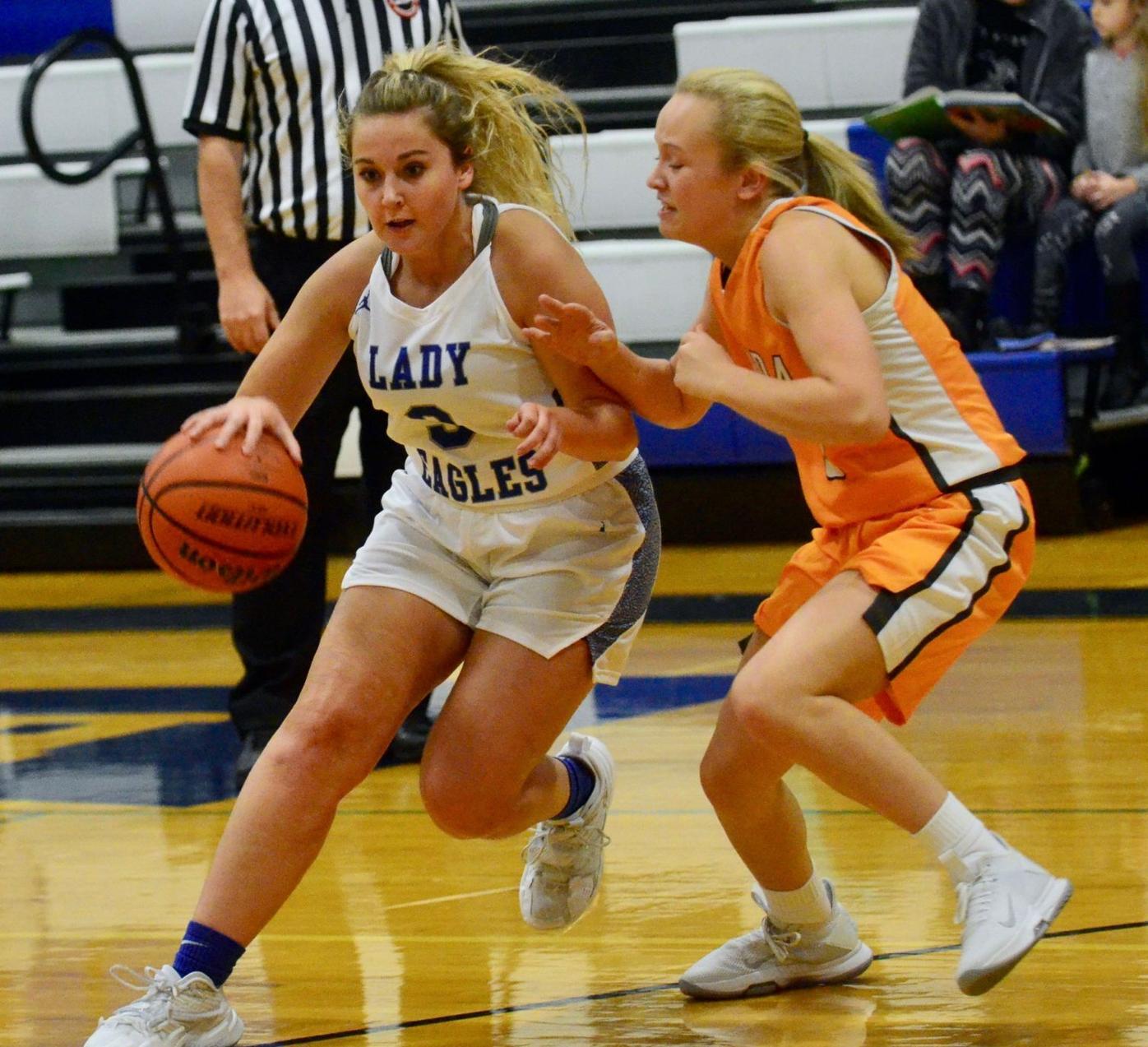 Cosby senior Lauren Ford (right) puts up a shot from the low block on Thursday against Oneida.

COSBY—With a late lead dwindling, the Cosby Lady Eagles had their pick of which senior would be the one to give them a lift and hold on to victory.

However, it was the heroics of legacy underclassman that would give them the spark they needed to pull out the victory.

In a rematch of the 2019 Class A sectional round held at Cosby, the Lady Eagles enacted revenge over an Oneida Lady Indians program that’s been to the state tournament in back-to-back seasons with a 54-42 victory on Thursday.

“This is a good win against a really good, really well coached Oneida team,” Lady Eagles coach Cody Lowe said. “We’re still working a lot of stuff out. No scrimmages over the offseason has been a setback for us, but I was still very proud of the effort tonight.”

After building a lead as large as 14 points late in the second half, Cosby (1-1) saw that lead get cut to as little as four points in the fourth quarter. The Lady Eagles never relented their lead, though, thanks in large part to the effort from sophomore guard Kinley Coggins.

“Kinley played huge,” Lowe said. “She’s a zone buster. They moved to a 1-3-1, and we did a good job of looking diagonal and finding her for some huge shots.”

Coggins had eight points in the final frame, each coming as an answer when Oneida (0-1) cut the Lady Eagles’ lead down to a pair of possessions.

To pull out the victory, Cosby had to rely on valuable minutes from its underclassmen all night as several of its seniors battled through foul trouble and injuries.

Bralyn McGaha and Gracie Myers each suffered injuries in each half of the game. McGaha would return to start the second half, but Myers left the game in the third quarter with an apparent injury to her nose and never returned.

“It was a physical game. We got beat up pretty bad, tonight,” Lowe said. “I hope Gracie’s okay. She’s instrumental to what we’re trying to do. She broke her nose last year, and I looked at her for a second and am worried she might have broke it again. She’s a tough kid, though.”

Leia Groat was one that battled through foul trouble, but still led the team in scoring with 12 points. Fellow senior Lauren Ford also finished the night in double figures with 11.

Oneida held an early 5-2 lead, but the Lady Eagles fought back to take their first lead of the night, an 8-7 advantage with just over three minutes left in the first period.

The Lady Indians got the lead back, but a 3-point basket by McGaha put the Lady Eagles back on top, 12-10, with less than a minute left in the frame.

Oneida answered to tie the score on the very next possession. Cosby still went on to lead 13-12 at the end of the first period after a Coggins free-throw.

The Lady Indians took a 14-13 lead to start the second period, but the Lady Eagles’ defense went to work in suffocating each of their offensive possessions.

With several forced turnovers in consecutive possessions, Cosby went on a 12-2 run to take a 25-16 lead. That run would expand to a 19-4 stint, as the Lady Eagles led 32-18 with two minutes left in the first half.

“They had a lot of girls that hadn’t played a lot of minutes, and we knew that coming in,” Lowe said. “We were trying to turn up the pressure from the get-go. I thought our guards did a good job of pressuring them and turning them over.”

Oneida got a basket back before the half, but Cosby still led 32-20 at the break.

Groat benefited most off of Cosby’s continuous pressure in the second quarter. She had seven points in the period, including one of three made shots from 3-point range to help add to the lead before having to exit the game midway through the period after picking up her second foul.

Both teams traded baskets to open the second half, as Cosby still led 37-25. Oneida began utilizing its own full-court press defense to force the Lady Eagles into mistakes, and was successful in doing so.

The Lady Indians closed the gap, taking a once 14-point game and making it a six point Cosby lead with just under four minutes left in the third.

“We had some silly turnovers in the third,” Lowe said. “We were a little too loose with the ball and they cut out lead down. That’s what happens when you play a good team, though. They’re a traditional power.”

After going nearly six minutes without a score, the Lady Eagles found one just before the end of the third, giving them a 39-31 lead going into the final eight minutes of play.

With 6:40 to go, Cosby’s lead was cut in half. The Lady Indians had gotten within four of the lead, the closest they had been since the first half.

Coggins would quickly change that, though, with her first make from 3-point range of the night. That score led to a 5-0 run by the Lady Eagles, but was immediately answered with five unanswered by Oneida.

Once again, Coggins denied their quest to come any closer.

Knocking down her second 3-pointer of the quarter, Coggins delivered the dagger. Cosby would go on to outscore Oneida 10-2 over the final four minutes to pick up the victory over the Lady Indians.

“Any time you can beat a team like Oneida, you’re going to take it,” Lowe said. “Marv West has been coaching that group for around 20 years, and is one of the best in east Tennessee. This was truly a game of runs. That’s what good basketball teams do, but we made some good plays down the stretch to close it out.”

The Lady Eagles have all of next week off before returning to action on Monday, Nov. 30 when they travel to take on Pigeon Forge for a 6 p.m. tip off. That game will begin a three game road trip.