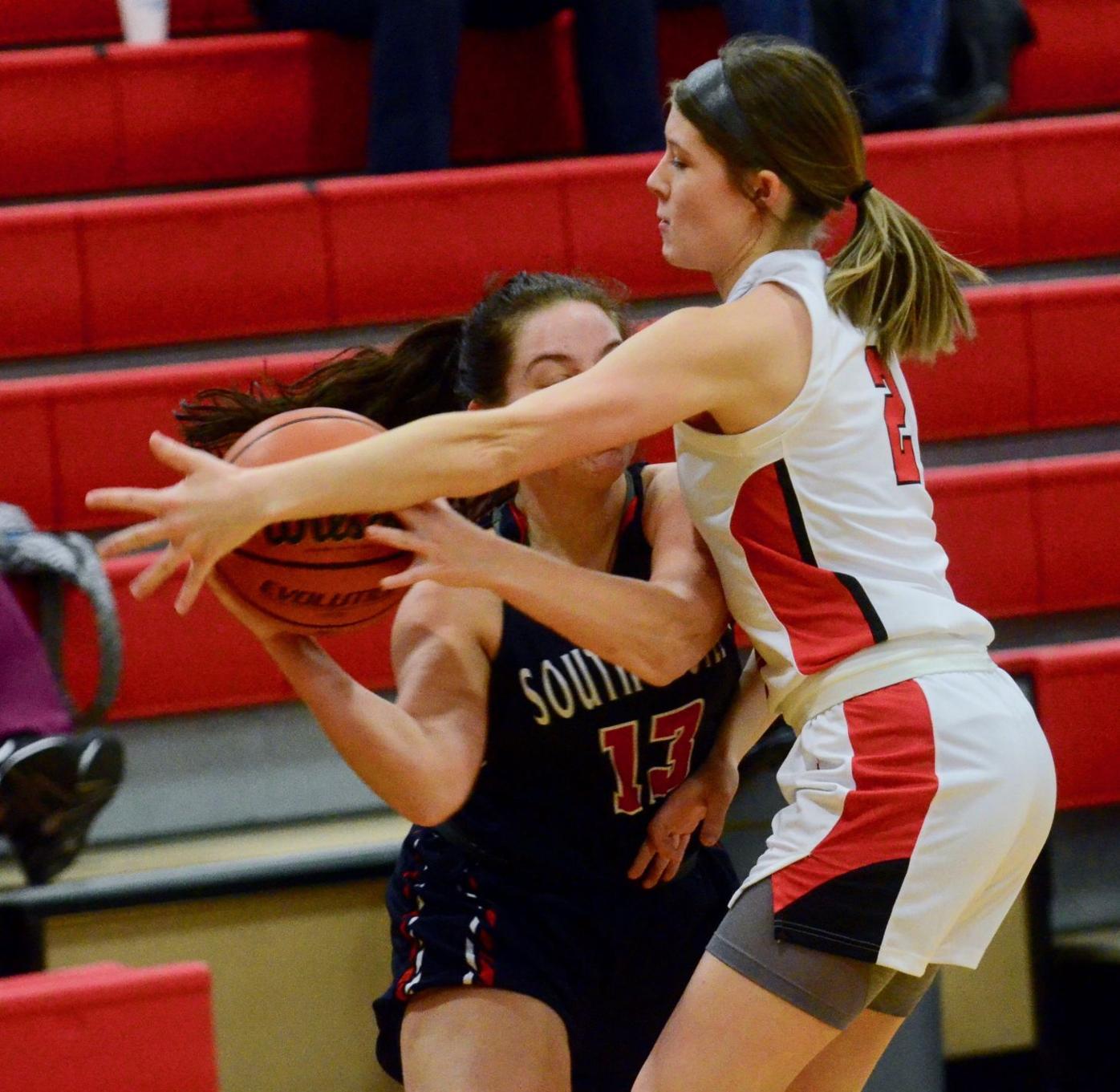 Cocke County junior Gracie Gregg smothers a South-Doyle guard in the back court during Tuesday’s win over the Lady Cherokees. 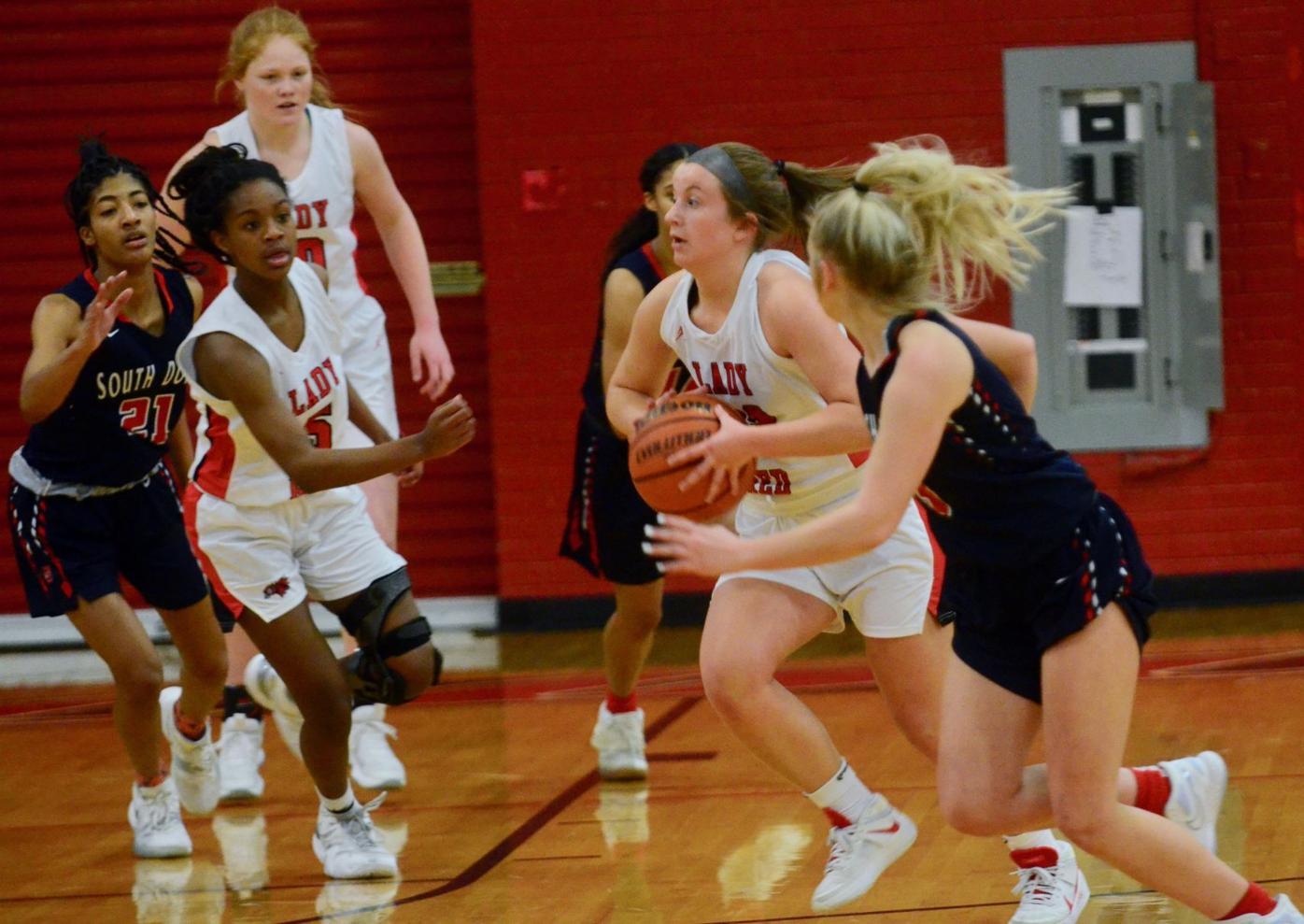 Cocke County junior Camryn Halcomb looks to push the ball up the floor after forcing a first-quarter turnover in Tuesday’s win over South-Doyle. 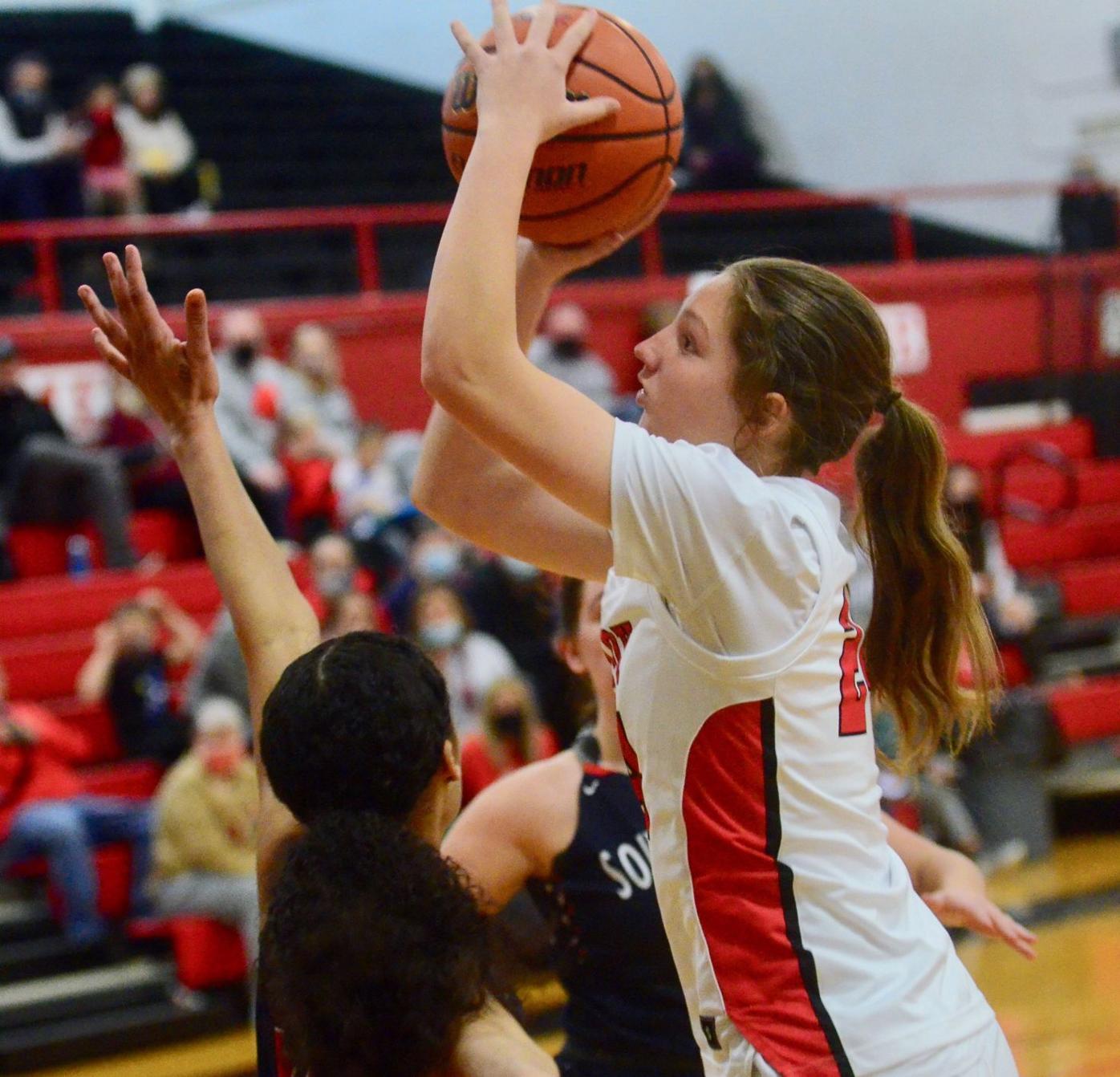 Lady Red freshman Destiny Reese powers up a shot in the paint over a South-Doyle defender on Tuesday.

Cocke County junior Gracie Gregg smothers a South-Doyle guard in the back court during Tuesday’s win over the Lady Cherokees.

Cocke County junior Camryn Halcomb looks to push the ball up the floor after forcing a first-quarter turnover in Tuesday’s win over South-Doyle.

Lady Red freshman Destiny Reese powers up a shot in the paint over a South-Doyle defender on Tuesday.

NEWPORT—The Cocke County Lady Red may be beginning to peak at just the right time.

Although the postseason is still about a month away, the Lady Red have continued to surge over the last week, as they picked up their third consecutive victory on Tuesday, a 65-32 win over South-Doyle.

The latest win streak says a lot about not only the new style and system first-year coach Chris Mintz has instilled, but the staff he’s assembled given his absence over the last week.

From longtime assistant Rory Welch, who followed him from his days in North Carolina, to Cocke County (9-6, 2-2 District 2-AAA) alums Spencer Moore and Mika Wester, the program has continued on strong while he’s been out.

“We always say next man up, and it’s always important for us to have each other’s backs,” Moore said. “A perfect example, our leading scorer had a slow night tonight, but we still scored 65 because everyone else stepped up and picked her up. Our girls are doing their part, and I’m just trying to do mine.

“We still can’t wait for Mintz to get back, but in the meantime we’re all going to do our part to keep this thing going.”

Over the last week the Lady Red have looked like a new team compared to where they were going into the holiday break.

“We’ve stressed intensity with our girls for the last three weeks,” Moore said. “In practice we’re having them play old school basketball. Get physical and get after it. I think they’re finally getting our system down, which is key, but they’re playing with confidence right now, too.”

In their last two victories, CCHS has been afforded the opportunity to work deep into its bench in order to get more of its younger players involved.

On Monday, eight different players posted scoring figures. In Tuesday’s win, that number jumped up to 11 with underclassmen closing out the win for most of the fourth quarter.

“We’re getting up early and keeping our foot on their throat the whole game,” Moore said. “That’s exactly what we want to do. When we do that we’re able to dig deep in our bench and allow our younger girls to get in and build some experience and confidence, which will go a long way for them.”

It didn’t take long for the Lady Red to jump out to a double-digit advantage on Tuesday night.

Niethammer dominated in the early minutes, overpowering S-D in the paint and getting to the charity stripe often. She had Cocke County’s first five points, and helped it jump out to an early 12-2 lead.

She would go on to finish the first half with a game-leading 14 points.

South-Doyle struggled to just get a shot off for most of the first period. Cocke County turned the Lady Cherokees over early and often in the opening minutes, as their first four possessions all resulted in turnovers without a single shot from the field.

“We’re always looking to speed the game up,” Moore said. “We come out and put pressure on them, and force them into uncomfortable spots and turn them over. That allows us to play our style of basketball and allows us to dictate the pace.”

Coming off the bench, Destiny Reese and Halle Kitchen each got involved in the game early. The underclassmen duo combined for nine in the first quarter, helping push the Lady Red ahead to a 20-8 lead at the end of the first.

“For Destiny to come in and do what she does off the bench is huge for us,” Moore said. “It’s always great to get bench production like that, especially from our younger girls. Some nights we can play as few as 7-9 girls, other nights we can play as many as 15. Right now, it’s all about everyone doing their part to fill their piece of the puzzle.”

One of many to come off the bench and contribute in Tuesday’s victory, Kitchen finished the night with double figures in scoring with 10 points. Reese closed out her performance with six.

Terryauna Griffin single-handedly kept the game from getting completely out of hand for the lady Cherokees. She had 13 points at the half, atoning for more than 75% of South-Doyle’s offensive production.

“We knew she was going to get hers,” Moore said. “She’s a natural athlete, and players like that will always get theirs. She may have to shoot 20 shots to do it, but she was going to get hers. What we wanted to do was frustrate her, and I felt our girls did a good job of that. That’s why she ended up in foul trouble and out of the game for most of the second half.”

Griffin finished the night with a game-high 18 points for S-D, as her production was hindered by foul trouble in the second half.

Cocke County led by as much as 19 early in the second. South-Doyle worked the deficit down to 14, but in the final two minutes of the half the Lady Red had stretched their lead back out to 19 for a 36-17 lead going into halftime.

CCHS immediately jumped its lead past the 20-point plateau on the first possession of the second half. South-Doyle got back within 17 with five minutes left in the third, but ultimately the Lady Red would once again extend their lead.

Cocke County held a 29-point edge with under two minutes remaining in the third, and carried a 53-24 lead into the fourth.

With the decision well in hand, the Lady Red had already began emptying its bench in the middle of the third. Continuing to work in younger players in a game that was all but over, Cocke County’s bench began to stuff the scorebook over the final eight minutes.

Extending the lead past 30 points, the younger members of the Lady Red finished off the victory by a 33-point margin.