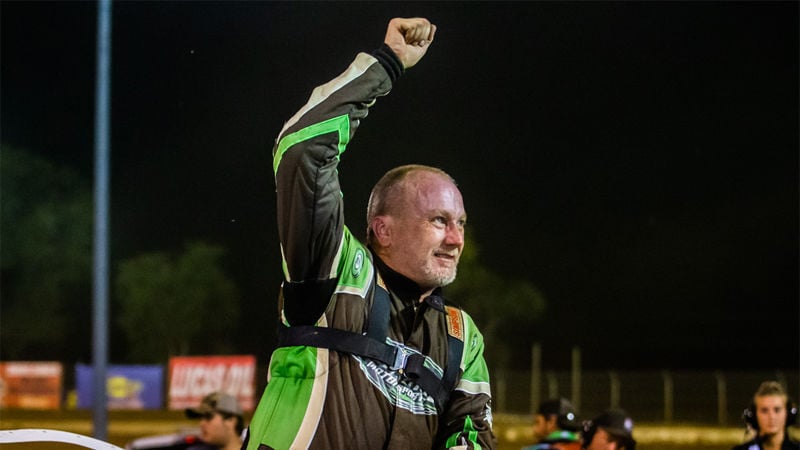 Jimmy Owens emerges from his car victorious after winning the Ralph Latham Memorial at Florence Speedway on Wednesday, Aug. 12, 2020. 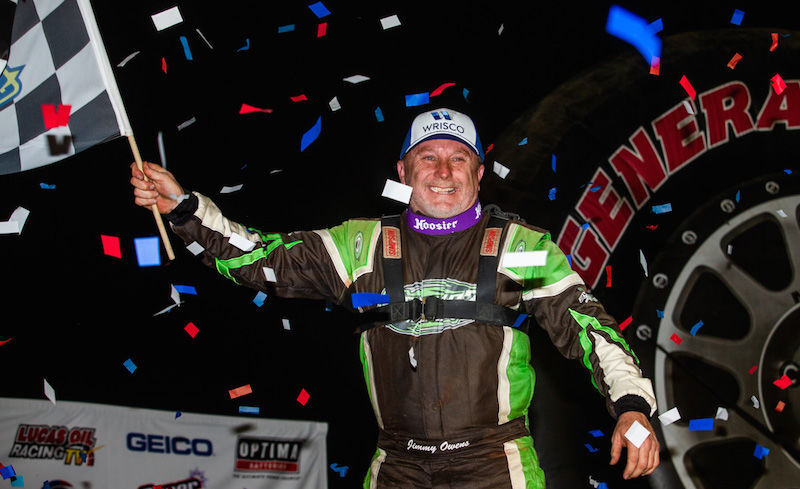 Jimmy Owens emerges from his car victorious after winning the Ralph Latham Memorial at Florence Speedway on Wednesday, Aug. 12, 2020.

BULLS GAP—Jimmy Owens is a fan favorite all across the country, but East Tennessee is home and Volunteer Speedway is where he honed his driving skills when first starting out racing.

Racing on the national stage nowadays, Owens has won every “crown jewel” event in dirt racing and recently wrapped up his fourth Lucas Oil Late Model Dirt Series championship. But there’s really no place like home, and Owens wrote his name once again in the record book Saturday at Volunteer Speedway as winner of the inaugural $15,000 Volunteer Motorsports Crate Late Model National Championship.

“It’s really awesome getting to race here at Volunteer Speedway this weekend in front of the home crowd that’s been a big part of my racing since the beginning and supported me through the years,” Owens said. “With racing nowadays taking me all around the country with the Lucas Oil Late Model Dirt Series and big races we run, you still just never forget people you grew up around at the racetrack. I’ve enjoyed running this event because it’s just a special feeling to talk with people in the pits that you don’t get to see like you once did.

“After our season ended back in mid-October, I actually came here to ‘The Gap’ a couple of weeks ago to watch my brother Kurt race his Modified Street car and had a really good time just hanging out that night.”

Sixty-four Crate Late Models returned Saturday to “The Gap” from Friday night’s opening count of 74, representing 12 states along with Canada.

Cory Hedgecock won the fourth heat, with Aaron Guinn winning the fifth heat, and Logan Roberson capturing the victory in the sixth heat.

Ford grabbed the lead on the start over Weiss, Hedgecock, Henderson and Roberson. Ford drifted up high in the banking in turn two on lap 3, allowing Weiss to drive by into the lead on the backstretch. Owens, who started from tenth, was making a charge forward quickly as he passed Zach Sise, Jason Welshan and Guinn before overtaking Henderson for fifth on lap 10 between turns one and two.

With Weiss in command out front the trio of Ford, Hedgecock and Roberson saw Owens close right in behind them. Henderson, Sise and Welshan had their own battle going for position from sixth to eighth.

Weiss caught rear of the field on lap 18 and began maneuvering his way around them, knowing he couldn’t hesitate because he was being pursued by Ford, Hedgecock, Roberson and Owens. Owens is a master at threading the needle when working through heavy lapped traffic, and on lap 21 he pulled off a daring move in getting past Ford, Hedgecock and Roberson when the slower cars momentarily held them up.

Now running second and seeing Weiss up ahead still catching cars to place them a lap down, Owens was zeroed-in and quickly closing in to mount a challenge. Getting a good run down the backstretch into the third turn on lap 30, Owens drove underneath Weiss and completed the pass for the lead racing up off (turn) four onto the front straightaway as many in the grandstand crowd rose to their feet cheering.

Owens began to gradually distance himself from Weiss and at the scheduled halfway competition fuel stop his advantage was almost a full straightaway, as the first 50 laps had ran caution-free. All cars stopped on the front straightaway to allow their crews to refuel only, with no tires or anything else permitted.

Off the ensuing double-file restart, Owens powered back out ahead but Weiss immediately slowed between turns one and two and down the backstretch, quickly being passed by Roberson, Welshan, Hedgecock, Ford, Sise and Henderson. Thinking he had a flat right-front tire, Weiss slowed to a stop and the caution waved on lap 52. Heading into the pits to allow his crew to change what thought was a flat, ultimately proved to be a broken shock which unfortunately ended his race.

There were only two cautions during the race, and following the yellow waving for Weiss, on lap 61 Bradley Lewelling slowed with a flat left-rear tire. His crew changed the tire and he tagged on at rear of the field for the restart.

Back under green and once again Owens asserted himself out front, while Welshan took second away from Roberson. Behind them Sise was running in the fourth spot ahead of Hedgecock, Ford and Guinn.

I didn’t really have plans to run this event, but Kyle Bronson (fellow Lucas Oil Late Model Dirt Series competitor) called and said another racer, Michael Lloyd, had a car he wanted me to drive,” said Owens. “Kyle brought it up from Florida in his hauler along with his car and we practiced Thursday to get a feel of driving it, because these crate (engine) cars don’t have nowhere near the horsepower like the supers (Late Model) I’m accustomed to driving have. I got pretty comfortable with the car and we ran pretty well last night in the $5,000 race and learned a lot about what my crew and I needed do to be better tonight.

“All in all this has been a really fun weekend of racing here close to home in my own backyard. I appreciate the guys bringing the car up for me to race. What a year it’s been with COVID-19 halting racing for a couple of months, and then once we do get cranked back up we have a great season and win our fourth Lucas Oil Late Model Dirt Series championship and now this weekend. It’s just a really cool deal to be able say we won this $15,000 Crate Late Model National Championship event.”

KC Burdette of Parkersburg, W.Va., was fastest in Brucebilt Performance Iron-Man Open Wheel Modified qualifying at14.438 seconds, with Brandon Kinzer timing-in second quickest at 14.607. Burdette powered into the lead on the start, but his run out front was short-lived as he spun in the fourth turn before one lap was completed to bring out the caution.

The second attempt to go green saw Clayton Miller take the lead over Brandon Kinzer, Blake Brown, Jeff Hamby and Amos Bunch. Hopes of victory for Miller were dashed when he dropped out on lap 6. Brown, from Corbin, Ky., took the lead over Kinzer and over the final 19 circuits hit his marks lap-after-lap to capture his third series win on the season. Brown was chased to the checkers by Kinzer, Hamby, Wayne James and Jimmy Dalton.

Zack Walton has established himself as “King of Front Wheel Drive” at Volunteer Speedway. Walton, from Blountville, started from the pole position and never looked back en route to capturing his division-leading ninth win of the season over Justin Tate, Jeremy Wyatt, Tyler Walton and Danny Tate.