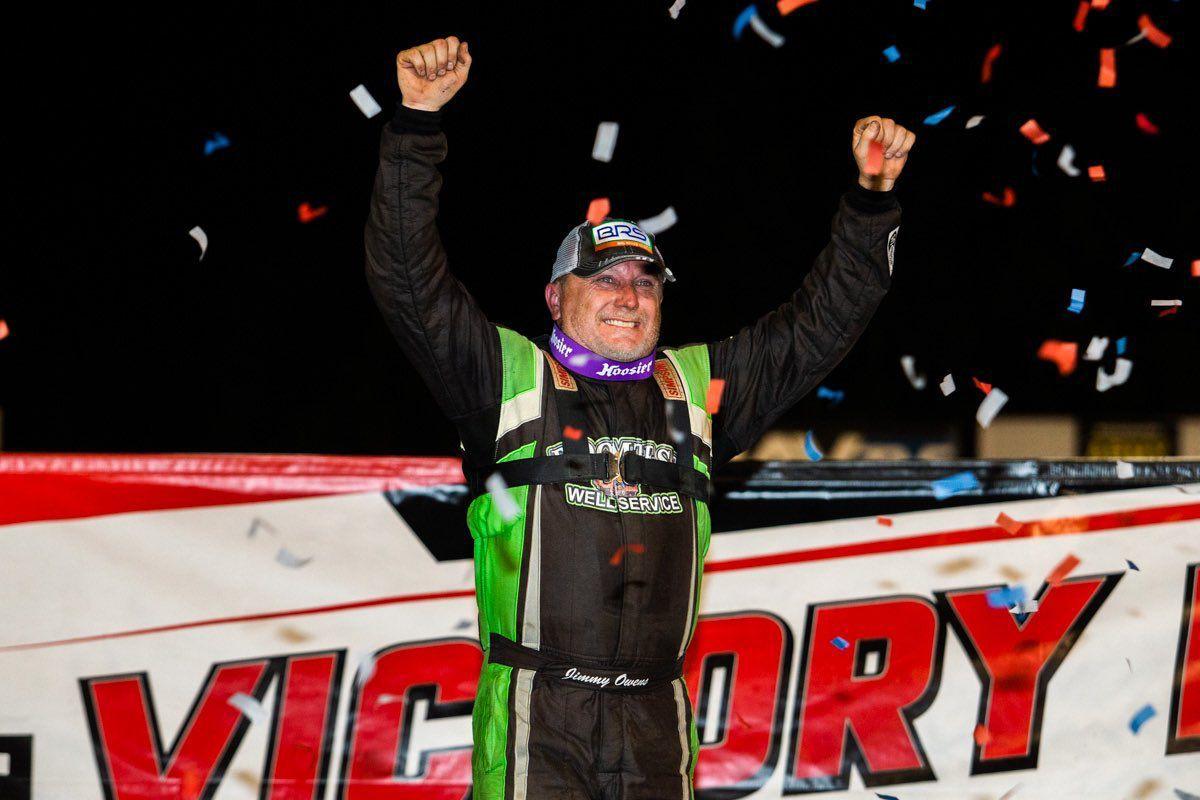 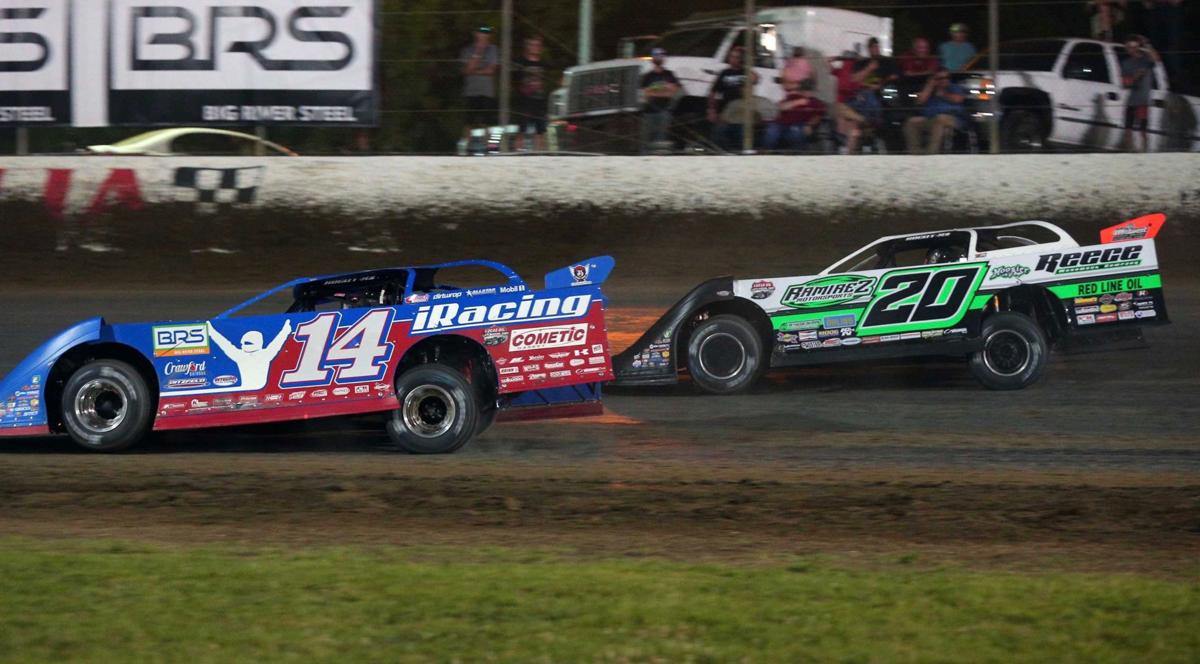 Owens wielded the Vic Hill-powered Ramirez Motorsports Rocket Chasis No. 20 to a pair of victories at Magnolia Motor Speedway on Friday and Saturday night.

With the wins, Owens now holds a 160-point lead over second place Tim McCreadie in the series standings. The series roars back to action on Friday, June 26 at 411 Speedway in Seymour, Tenn.

Current Lucas Oil Late Model Dirt Series Championship Point Leader Jimmy Owens won a battle with Josh Richards on Friday Night of the General Tire Clash at the Mag – presented by Big River Steel, at Magnolia Motor Speedway to take his second series win of the season. Owens yielded the lead to Richards on the 19th lap, but one circuit later he was back in front. He pulled away from Richards to take his 66th career series win.

After starting fifth on the grid, Richards vaulted to the second spot on the opening lap behind Owens and battled with Tyler Erb for the runner-up slot. Richards and Erb went back-and-forth, with Richards gaining the advantage with 11 laps scored. Richards began to pull away from Erb and started challenging Owens for the lead soon thereafter, especially after the fourth and final caution of the race with 12 laps complete.

Richards tried several times to get by Owens as the two were using every available line around the 3/8th mile oval. Richards dropped to the inside of Owens coming off turn to take lead as the two Rocket Chassis drivers completed the 19th circuit. Richards slid high in turn one, opening the door for Owens to regain the lead for the final time.

“After they prepped the track tonight before the feature, you didn’t know whether to go high or low,” Owens said. “I knew the middle of the track was going to be good. I knew Josh was behind me and he’s got a great car, and also that he would challenge me hard. When he passed me and he scooted up the track, he left me the room I needed to get by.”

Richards — like Owens — was seeking his second series win of the year and was pleased with his second place run in the Clint Bowyer Racing-owned car.

“When I got the lead on Jimmy, I should have rolled the middle in one and two but got too far up the track and left him too much room,” Richards said. “Jimmy’s been great this year, congrats to him and his team on the win. It was good for us to start in the back last night. I could maneuver and really see what the car could do when the track gets slower.”

“Jimmy had the best car tonight,” Erb said. “I thought the top was going to be better. The track was really racy for a long-time time, but those two got away from me. I was just trying to hang on for third.”

OWENS WINS CLASH AT THE MAG ON SATURDAY NIGHT

The 100-lap main event saw three different leaders, with Owens regaining the top spot from Shane Clanton on lap 23. After several breakaway runs, Owens held off Clanton at the finish for his third Lucas Oil Late Model Dirt Series win of the year. Clanton finished just ahead of Josh Richards who came home in third. Bobby Pierce and Tyler Erb rounded out the top five drivers.

As the initial green flag dropped, Owens took the lead and Erb ran second for the first 13 circuits of the race. Clanton started fifth and made an early race challenge by climbing to the second spot around Erb on the 14th lap. Erb would pass both Clanton and the race leader, Owens on lap 16 to gain the top spot. Clanton then became the third new leader of the race as he went to the point on lap 18, but 4 laps later Owens powered around the leader, regaining the lead after a lap 22 restart.

Clanton and Erb chased down Owens as the leader was battling traffic. With the top three nose to tail and Clanton threatening to retake the lead, a caution came with 18 laps remaining. Clanton’s hopes for the win faded in the final laps as Owens went on to take the victory over Clanton by .570 seconds at the finish.

“This car was really just flawless this weekend,” said Owens in Lucas Oil Victory Lane. “We were so close to making it a sweep for the weekend. Thanks to all the fans who came out. When the track is slick like this, I think it makes for some better racing.

“We have a hard-working crew and it paid off in the end. Consistency is the key to our program this year. We’ve ended the last couple of seasons running great and we are really excited for the whole season. It is a whole lot better when you are running good. Maybe 2020 will be the year for car number 20.”

Clanton led five laps early in the race and again got close to Owens with 18 laps to go when a caution flag came out. He finished in the runner-up spot for the second time this season.

“We had a good weekend. We have worked awful hard the last two weeks on the car and it shows,” Clanton said. “We’re getting better. To come here and run good feels good. Every time you run good like this, it helps the morale of the team. We are not giving up. If it weren’t for Greg and Tyler Bruening, I probably couldn’t be here.”

Richards came home in third in the 100-lap finale.

“We did not touch the car tonight,” Richards said. “I couldn’t steer it like I wanted to. I couldn’t turn in at all. Once we had some fuel burn-off then I could steer it a little bit better. I would have liked to have won for Big River Steel, but Jimmy’s been really tough. I feel if we could have had the car a little better we might have had something for him.”