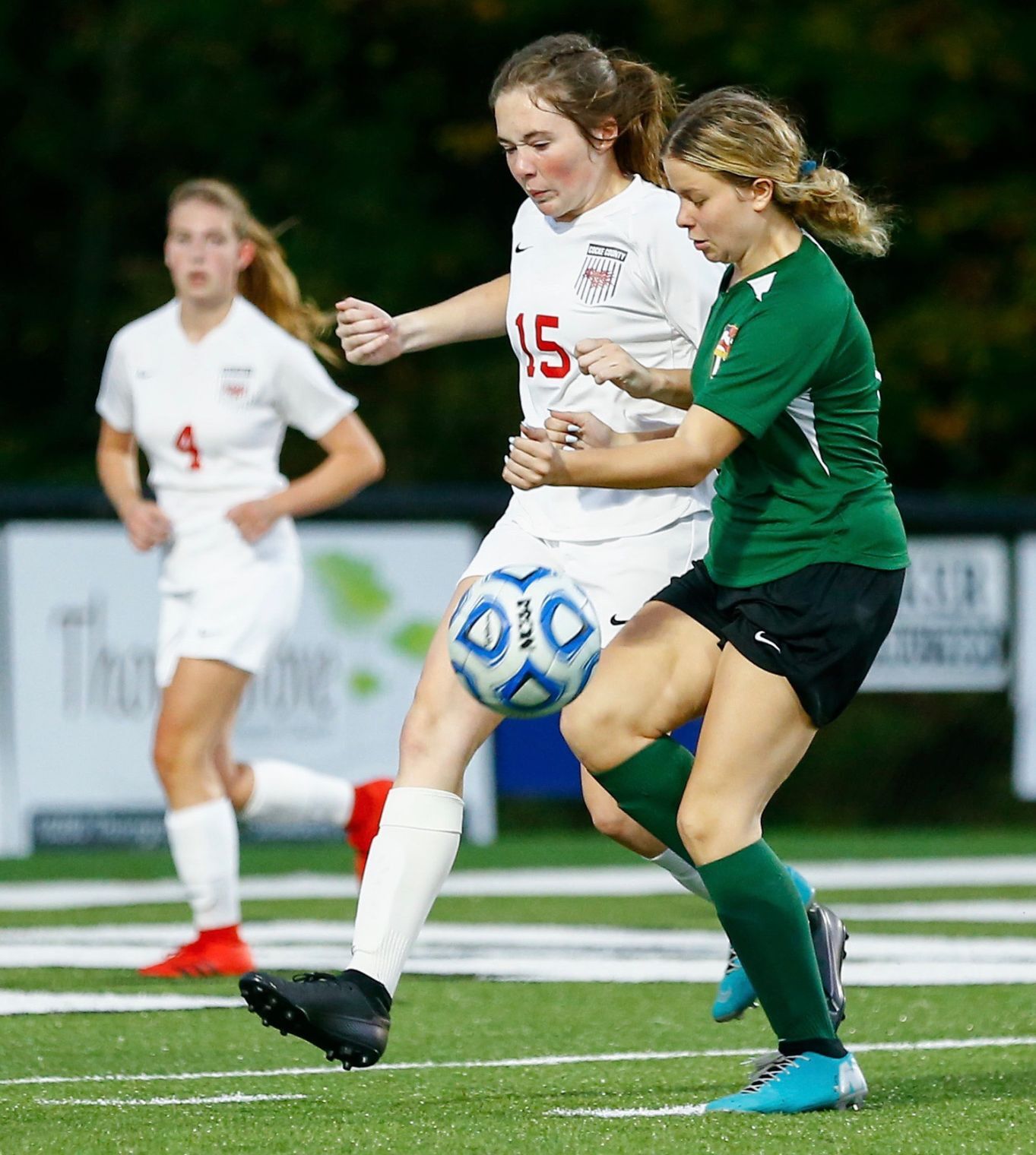 Cocke County’s Jenna Pittman (15) defends as Carter’s Kelsey Stillwell (2) works the ball to the goal during the semifinals of the District 3-AA Tournament at Carter High School on Tuesday October 12, 2021. 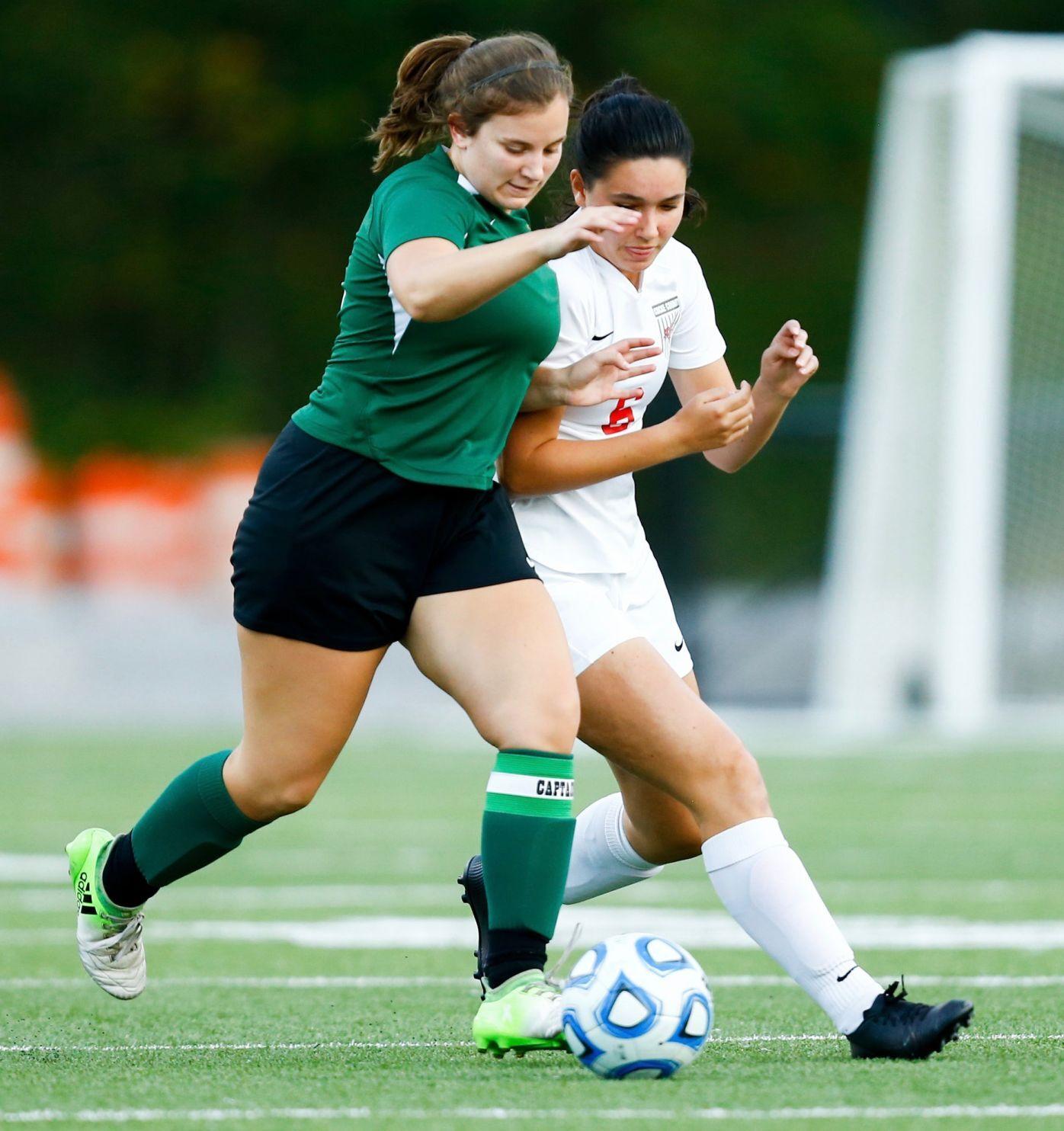 Carter’s Annalee Crigger (18) and Cocke County’s Karlie Souder (6) battle for control of the ball midfield during the semifinals of the District 3-AA Tournament at Carter High School on Tuesday October 12, 2021.

Cocke County’s Jenna Pittman (15) defends as Carter’s Kelsey Stillwell (2) works the ball to the goal during the semifinals of the District 3-AA Tournament at Carter High School on Tuesday October 12, 2021.

Carter’s Annalee Crigger (18) and Cocke County’s Karlie Souder (6) battle for control of the ball midfield during the semifinals of the District 3-AA Tournament at Carter High School on Tuesday October 12, 2021.

STRAWBERRY PLAINS—The district tournament semifinals were as far as the season would go in what’s been an outstanding year for the Cocke County Lady Red.

Despite keeping it a tight matchup in the first half, the Lady Red fell in their District 3-AA semifinal, 5-0, to the Carter Lady Hornets on Tuesday to bring their season to an end.

“I hate to see our season end, but it was enjoyable working with such a motivated and talented group,” CCHS coach Mikayla Gregg-Metzdorf said. “The season as a whole indicated that we were capable of not only generating solid wins, but that we were able to grow in overall performance as a team.

“I emphasize not only a winning mentality but, more importantly, emphasize team performance. The girls were able to execute and demonstrate their growth as the season progressed.”

Carter led 1-0 at the half over CCHS, but scored four goals in the second half to close out a 5-0 shutout win over the No. 3 seed Lady Red.

The 2021 season was a breakthrough year for Cocke County (7-4-1) and third-year head coach Gregg-Metzdorf. The year finished with a winning record and topped last year’s win total of five victories.

Gregg-Metzdorf was confident before the season kicked off she had one of her best teams yet. The numbers certainly don’t lie.

The Lady Red set a new benchmark for wins in a season, which they’d just reset a season ago. The team got off to a 3-0 start to the year, and didn’t lose their first match until their fifth game of the season.

Cocke County loses four seniors from this year’s group, all of which were multi-year contributors. Karlie Souder, one of the team’s leading scorers, and Shiya Patel, a utility player that played mostly in the midfield, are two four-year starters that will be big blows to the roster as the program moves forward.

“Karlie has been a captain for the team for the past three years,” Gregg-Metzdorf said. “Her leadership, along with the other three seniors, is certainly going to be missed next season. They are not only great athletes but great students, and even better individuals.”

Ariana Pinto and Sidney Coakley both played midfield and linebacker for the Lady Red and had big contributions in the team’s four shutout victories this season.

Cocke County returns a plethora of underclassmen that had high levels of production throughout the year, though.

CCHS had eight freshmen and 10 total underclassmen for the 2021 season, many of which were dispersed throughout the pitch for the majority of the year.

Mia Budinahaija and Ella Serpico, had strong freshmen campaigns and will be back a year more experienced in the high school arena in 2022.

“I spoke to the team about the bright future of the team after our district tournament loss against Carter,” Gregg-Metzdorf said. “Our freshmen are a great group of hardworking and talented soccer players. We started freshmen all over the field. Keeper, center back, midfield, and forward. So I am very encouraged about our outlook next season.”

As far as upperclassmen, Jenna Pittman — who will be a four-year starter by next season — and the Upman twins — Sabrina and Latrina — bring back a wealth of experience for their final year in a Lady Red uniform.

The main goal Gregg-Metzdorf has set for her team each season is to outperform the year before. So far, each year her team’s have done that. Outperforming 2021 will be their greatest challenge yet, though.

“Each season individual players step up to the task of becoming leaders, improving their fitness, and acquiring new skills,” Gregg-Metzdorf said. “I believe to keep the tradition going next season the same high standards will need to be put into place.

“This goal has been achievable each year because of the high standards we set. I am not worried about the growth of the players, as the girls are dedicated and hard-working, so growth will naturally come.”