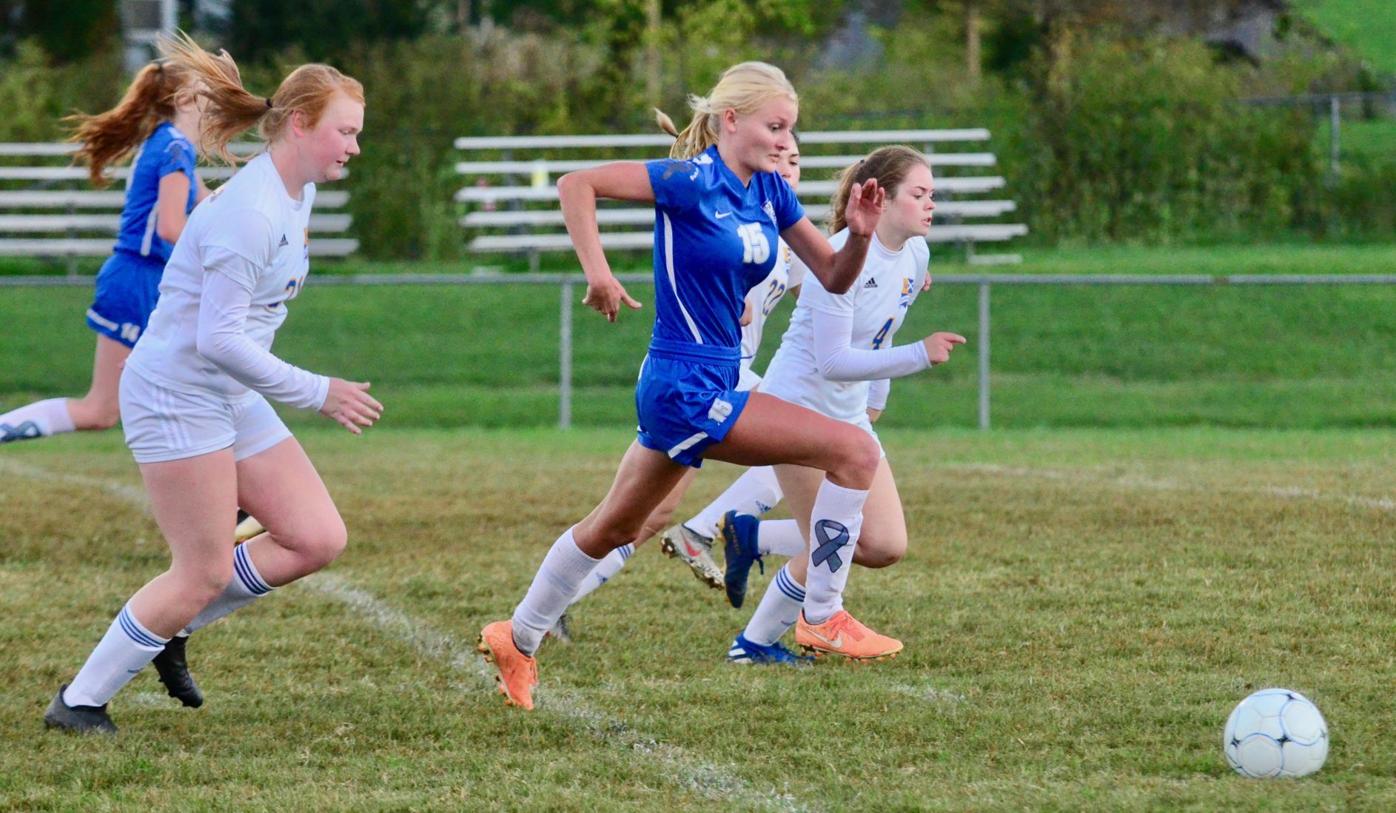 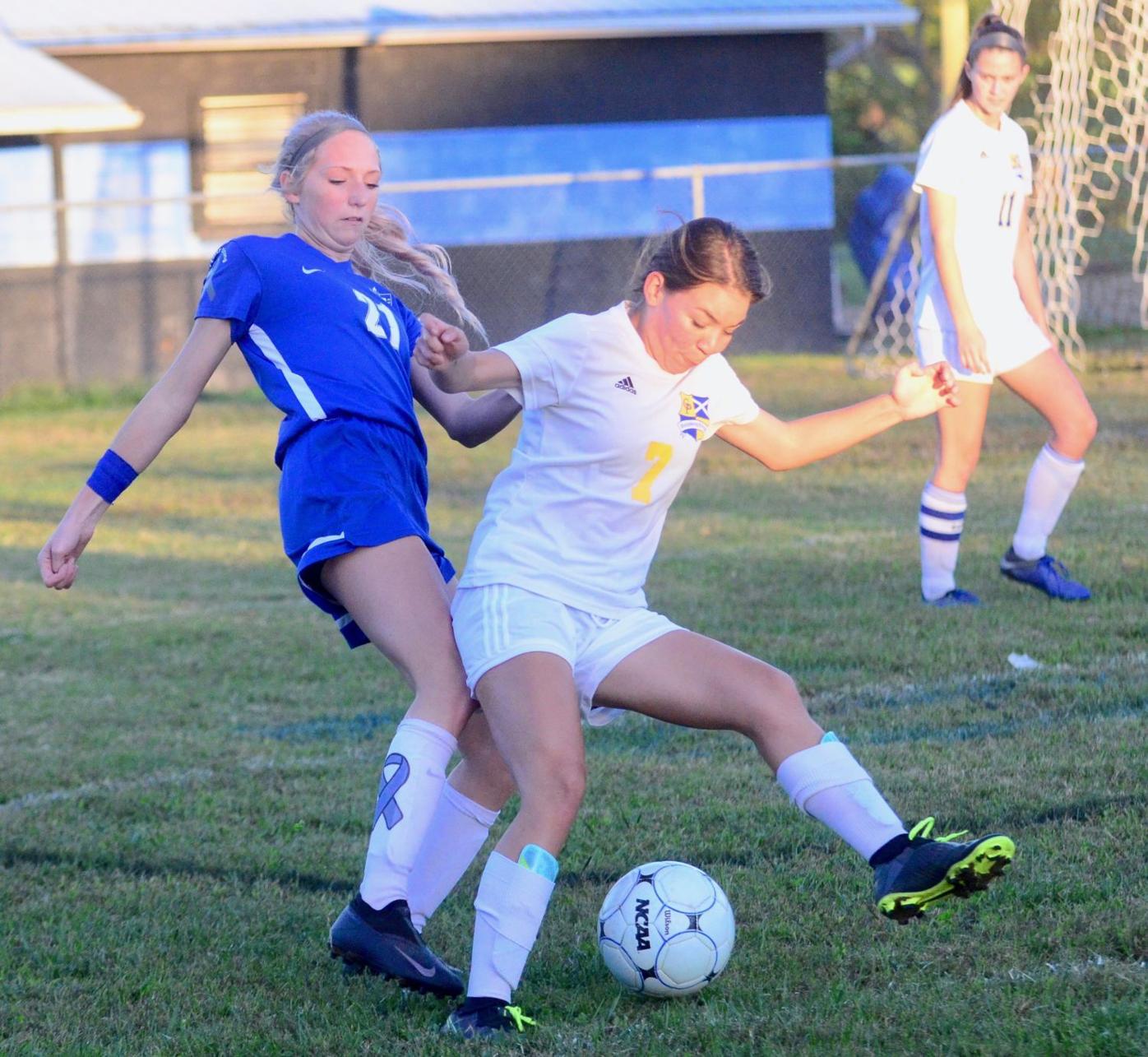 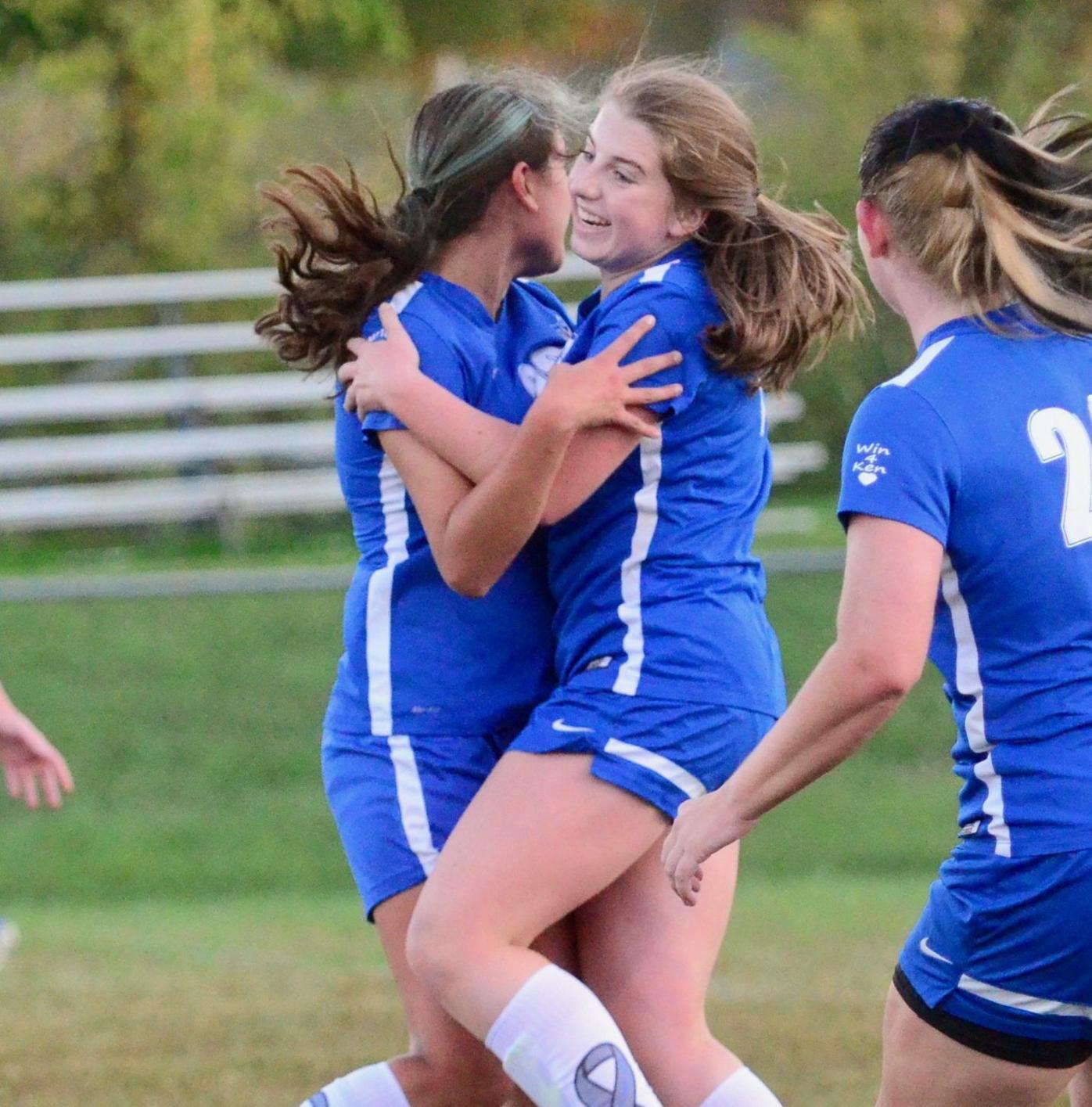 Cosby sophomore Kaymen Moss (center) celebrates with Alyssa Federighi (left) after scoring a first half goal against Gatlinburg-Pittman on Tuesday. 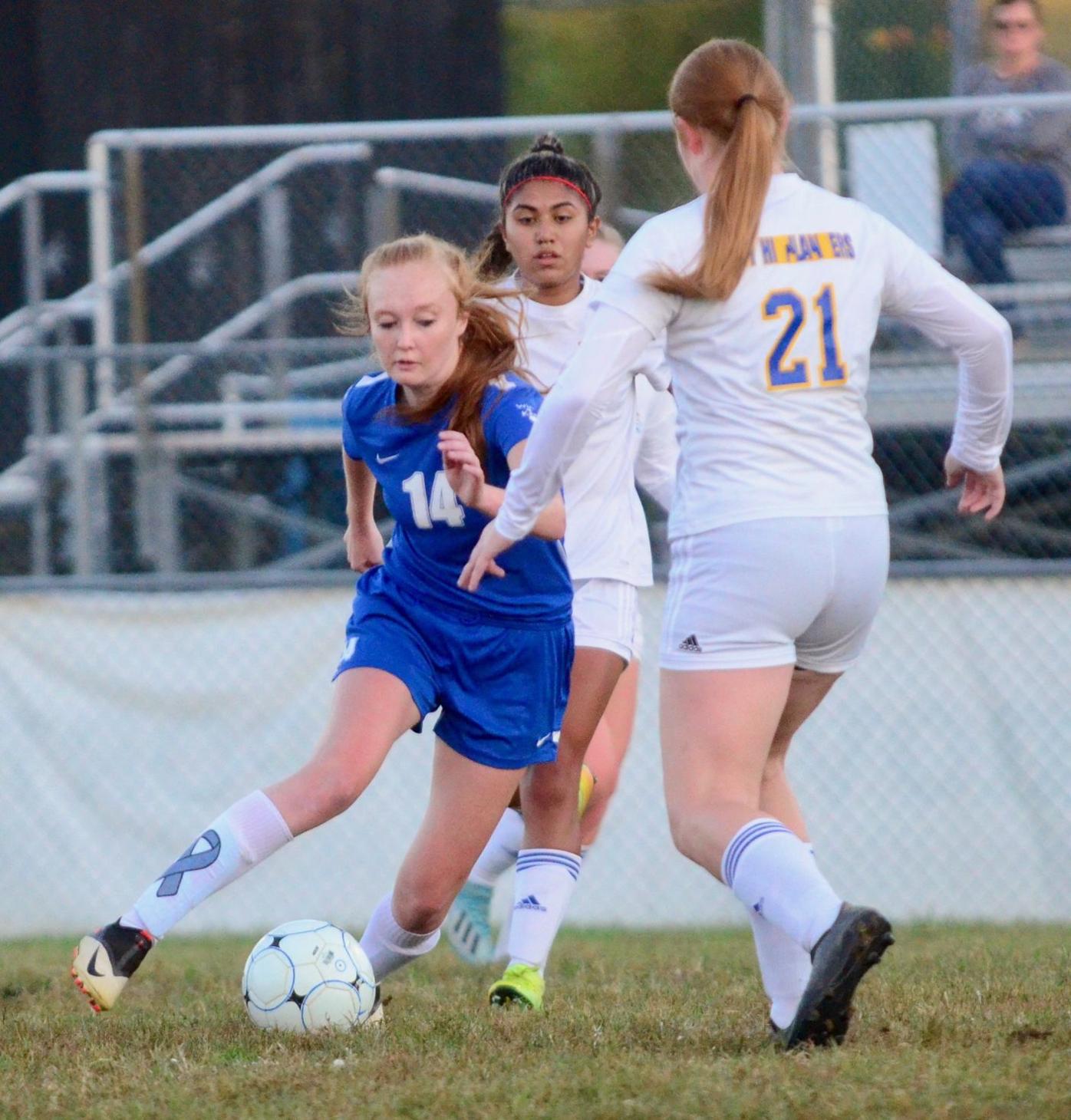 Cosby senior Leia Groat (14) pushes the ball up the pitch between a pair of Gatlinburg-Pittman defenders on Tuesday. 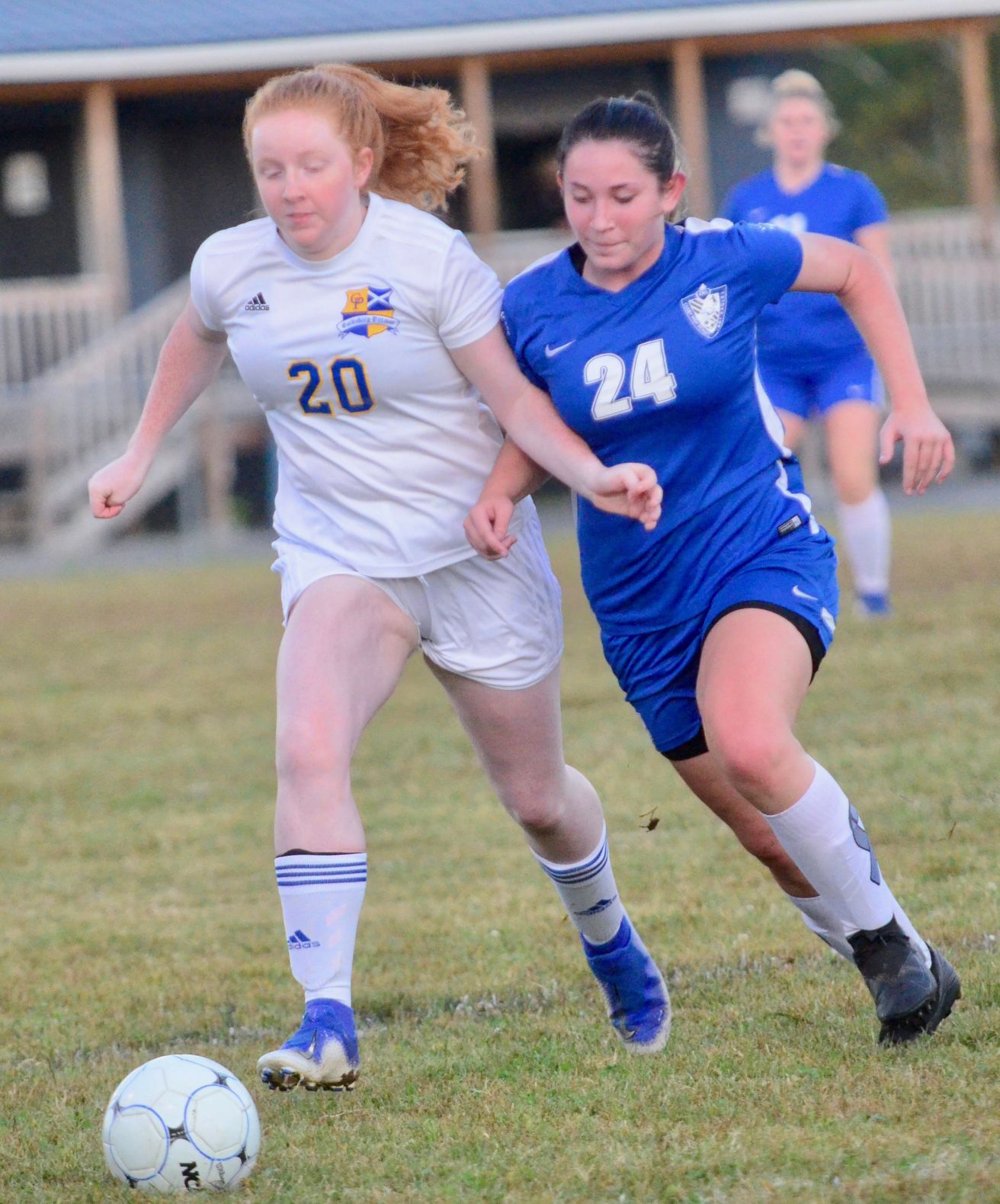 Cosby sophomore Kaymen Moss (center) celebrates with Alyssa Federighi (left) after scoring a first half goal against Gatlinburg-Pittman on Tuesday.

Cosby senior Leia Groat (14) pushes the ball up the pitch between a pair of Gatlinburg-Pittman defenders on Tuesday.

COSBY—For the third time in four years, the Cosby Lady Eagles will play for a district title.

Cosby dispersed of Gatlinburg-Pittman in Tuesday's District 2-A semifinals with a 2-0 victory, good enough to move them on to the championship match where it will face Alcoa on Thursday.

"It feels good to be moving on, once again," Cosby coach James Groat said. "I always love good defensive games, too. We got an early lead, but our defense played an outstanding game to preserve the shutout."

Goals by senior Leah Murray and sophomore Kaymen Moss proved to be the deciding factor in Tuesday's victory. Both goals were scored by the 18th minutes, giving Cosby (9-3-1) a 2-0 advantage it was able to defend the rest of the match.

"G-P is a defensive team," Groat said. "I respect that out of them. I'm a defensive guy, myself. Getting an early lead on them puts the pressure back on a team like that, though. Getting a lead will put pressure on any team, but especially ones that want to play back more like they do."

Murray scored her goal in the seventh minute, thanks to an assisted through ball from fellow senior McKenzie Owen. Moss booted in her goal from over 25 yards out off a drop in the 18th minute.

"Kaymen had a huge goal to put us up by two scores," Groat said. "Our strikers take a ton of pressure from teams back lines. We're trying to shift some of that pressure off of them by giving them an outlet to drop the ball to and let them blast it. They executed that well, tonight."

"Daycee Weeks played a phenomenal game in goal for us," Groat said. "The saves she came up with were outstanding, and it makes me feel good to see her play so great.

"That back line deserves a lot of credit, as well. They take a lot from me, but they step up and do their job, just like they did tonight. It's always huge when you can pitch a shutout in this type of setting."

Weeks finished Tuesday's victory with six saves, all of which came in the second half.

Trailing by two at the half, Gatlinburg-Pittman came out aggressive trying to cut into the deficit to start the second half.

"They had a few breakaways that had me thinking they were going to cut our lead in half," Groat said. "Daycee came up with some phenomenal saves, though. They dominated us in the second half."

The Lady Eagles were able to balance possession out to finish the game, though, keeping the ball back on their side of the field for most of the final 20 minutes to slow G-P's attack and take pressure back off of their own defense.

"Pushing the ball forward again was huge," Groat said. "I was impressed with the midfield today. They played outstanding. We've got three underclassmen and a senior holding up that line, and had some girls rotate in to give us some solid minutes when we needed breaks."

Cosby now gets set to chase an elusive district crown for the third time in four years when it plays Alcoa on Thursday.

Tuesday's win also guarantees the program a spot in next week's Region 1-A semifinals, where it will either play the champion or runner-up out of District 1-A, depending on how both of Thursday's district title games play out.