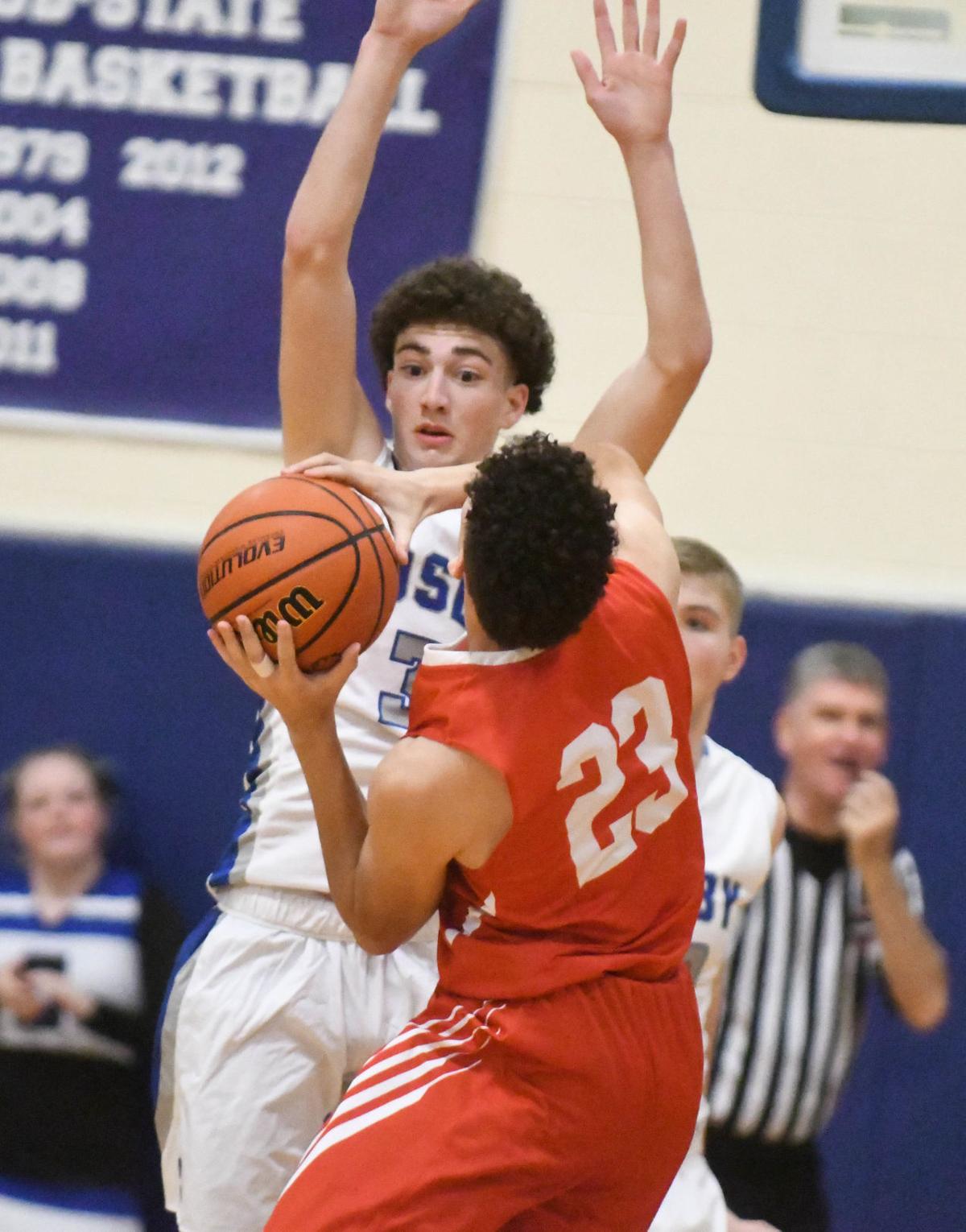 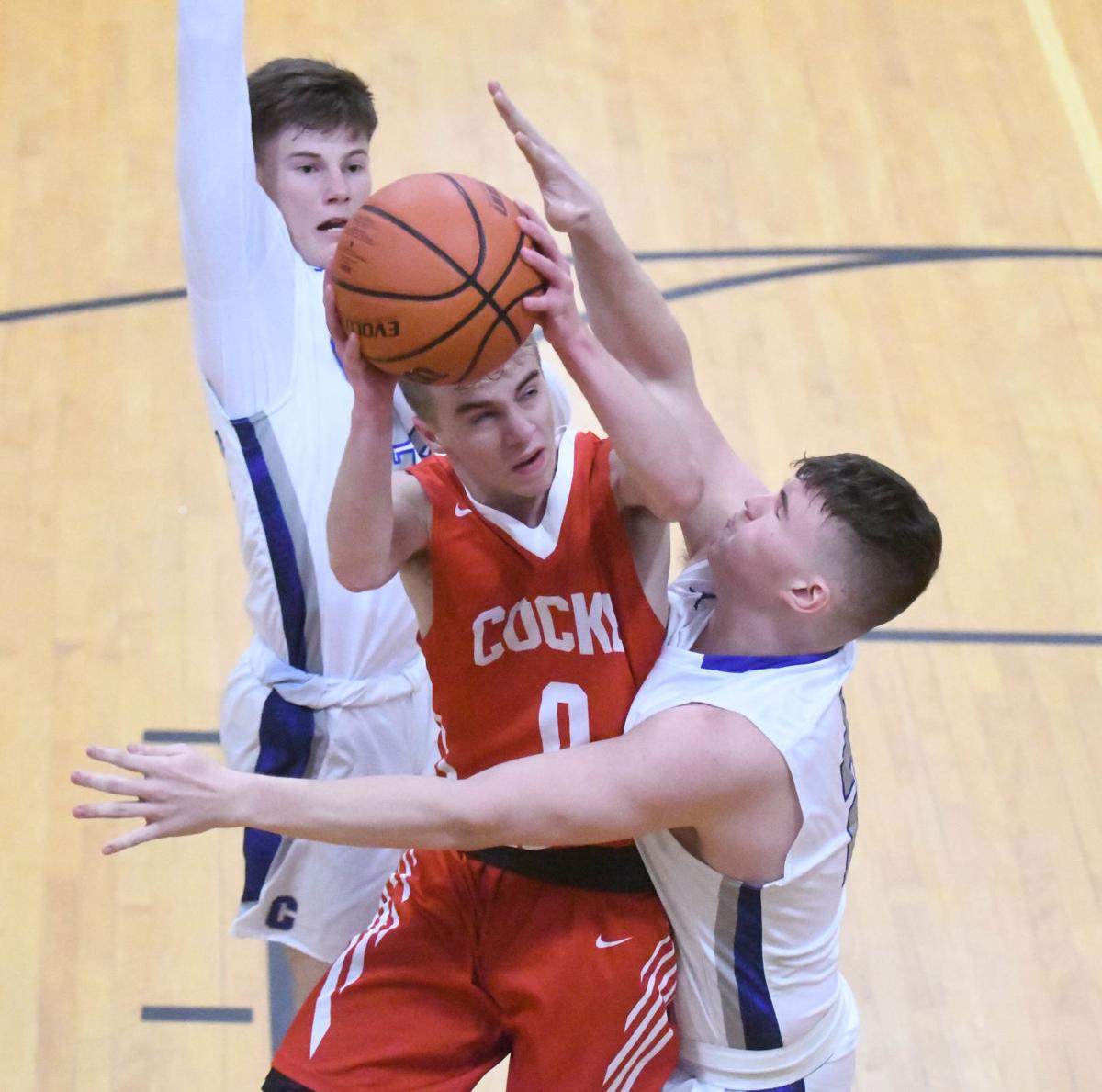 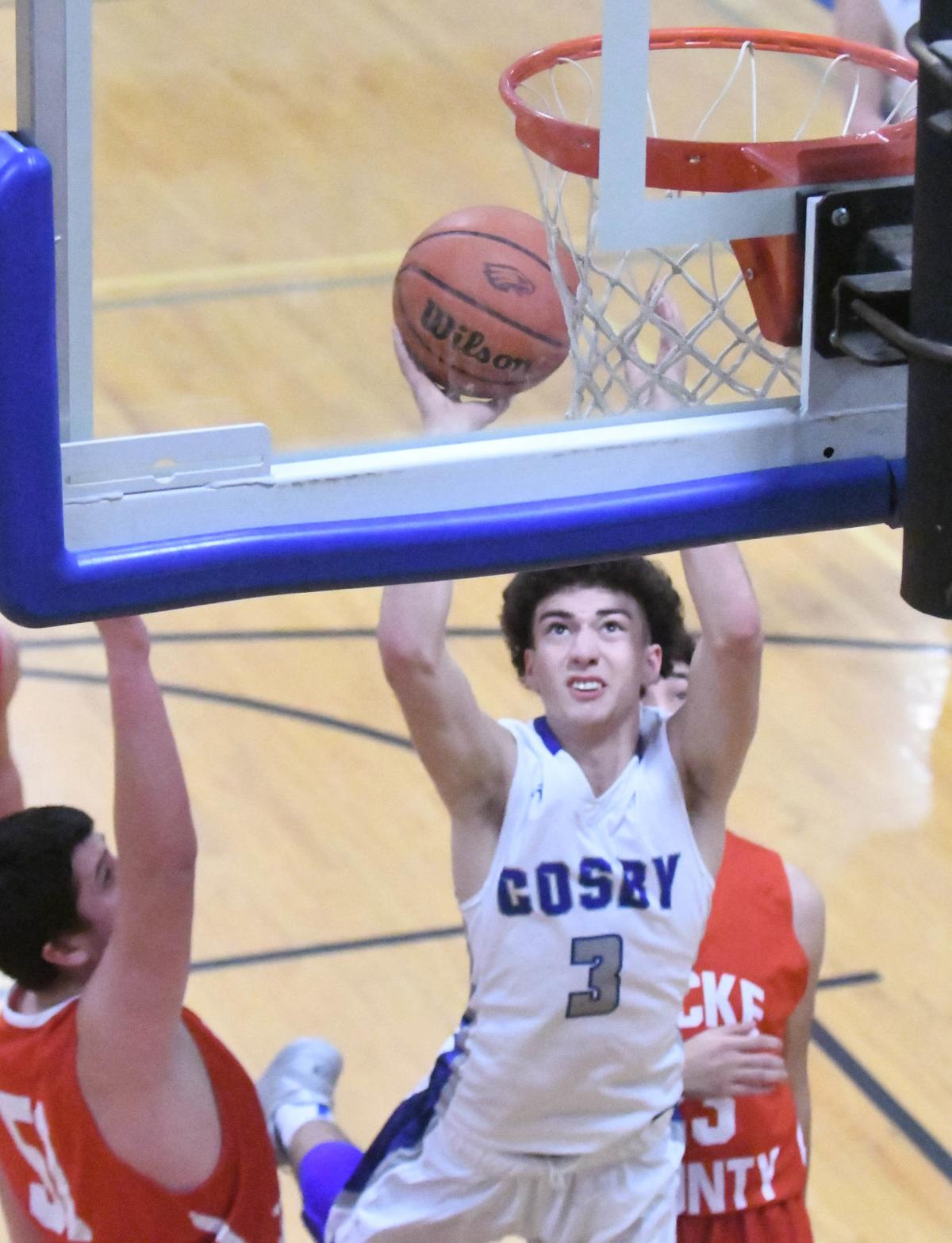 Cosby junior Trey Johnson goes up for a shot in the lane between a pair of Cocke County defenders on Tuesday.

Cosby junior Trey Johnson goes up for a shot in the lane between a pair of Cocke County defenders on Tuesday.

COSBY—When your starting point guard goes down early with an injury, heads immediately begin to turn and eyes wander to figure out who’s going to step up.

Jeremy Wise’s eyes remained still, though. He knew he was going to take it upon himself to lead his team.

“We were sort of struggling on offense, and their zone really bothered us early in the game,” Wise said. “I just figured someone was going to have to start pulling some shots, so why not me? I just kept shooting from that moment on.”

The senior went out with a bang in his final outing against inter-county rival Cocke County, dropping a game-high 27 points on seven made shots from 3-point range, two of which came in the clutch in the final minute of the game.

“After the first two went through I thought I had something,” Wise said. “After the third one fell I knew every time they gave me a little space I was going to let it fly.

“It feels great after suffering a couple of heartbreaking losses to them in my freshman and sophomore seasons,” Wise added. “I honestly thought we were dead in the water coming down the stretch, but it was incredible being able to step up and get this one at home.”

It was one of those moments that will forever be etched in Cosby High School basketball folklore. As a four-year player for the Eagles Wise has already left quite the mark on the program, but Tuesday’s monster performance will be one that will be talked about for many years to come.

“I’m glad it was Jeremy that had that moment,” Brooks said. “I’ve got four seniors, but not all of them have been four-year players for us. Jeremy has. He’s been here from the beginning and put blood, sweat and tears into this program. He earned his moment, tonight.”

GOING OUT IN STYLE

When Shaffer left the floor on Tuesday night it was automatically expected that Wise and Trey Johnson would likely be the two workhorses to pick up the slack in his absence.

While both were still key pieces in Tuesday night’s win over Cocke County, Chad Styles emerged as an under the radar player that gave the Eagles key minutes to get them to victory.

“Chad had two big 3s for us in the first half and gave us some big minutes,” Brooks said. “I thought he did a lot of good things for us in the wake of everything that happened early. I was very proud of him and the way he played. I don’t know that I can say enough about the way he stepped up.”

Styles had eight points in the second quarter, and buried three of the team’s 13 makes from 3-point range. His play was an intricate piece in helping Cosby secure the season sweep over its cross-county rival.

While Johnson’s performance on Tuesday was also a key factor in Cosby’s victory over Cocke County, the junior sharpshooter took a while to get going.

Johnson only had five points by the half, and was scoreless in the first quarter. Drawing the ire of his head coach, the duo put together a plan to elevate his play in the second half.

“I’m not shy about calling my guys out if I have they can contribute more,” Brooks said. “But at the same time I’ll pick them up when I know they need it. With Trey, though, all I did was put him at the free-throw line and forced his hand.”

The move worked to perfection, as Johnson had 12 of his 17 points in the second half, including a pair of treys he knocked down in the third that got him going. The move also played a key role in the outcome of the game, even if he didn’t have the ball in his hands.

“That not only helped him get going, but helped free us up on offense a little more,” Brooks said. “Especially on that last play, because by that point they were really keying on him to deny him the ball in that spot. That’s what freed Jeremy for that last shot.”

Tuesday’s win marked the first season sweep on the boys’ half of the rivalry between Cosby and Cocke County since the two began playing again in the 2016-17 season.

Cocke County did defeat Cosby twice in the inaugural rebirth, but the two played three times that season with the third meeting coming at a Christmas tournament at Knox Catholic High School. The two split in the home-and-home series, each winning in their own gym, while CCHS took the neutral site victory that year.

Beating his alma mater once was already sweet enough, but to get the season sweep over the school he called home in his first season as a head coach was all the more sweeter for Brooks.

The environment the game produced is an added bonus, though.

With the month of February edging towards its second week, postseason basketball is just around the corner. And Tuesday night’s atmosphere had all the makings of a big-time postseason setting that the Eagles hope they’ll be a part of this year.

“It’s absolutely huge to get a win in an environment like this,” Brooks said. “Looking around as we were getting ready to introduce lineups, coach (Richard) Coggins comes up and says this is a (sectional round) atmosphere. And it was. This was an incredible atmosphere and an incredible game.

“Everything about this game screamed postseason basketball, and with that being right around the corner getting a win like this is huge for us moving forward.”