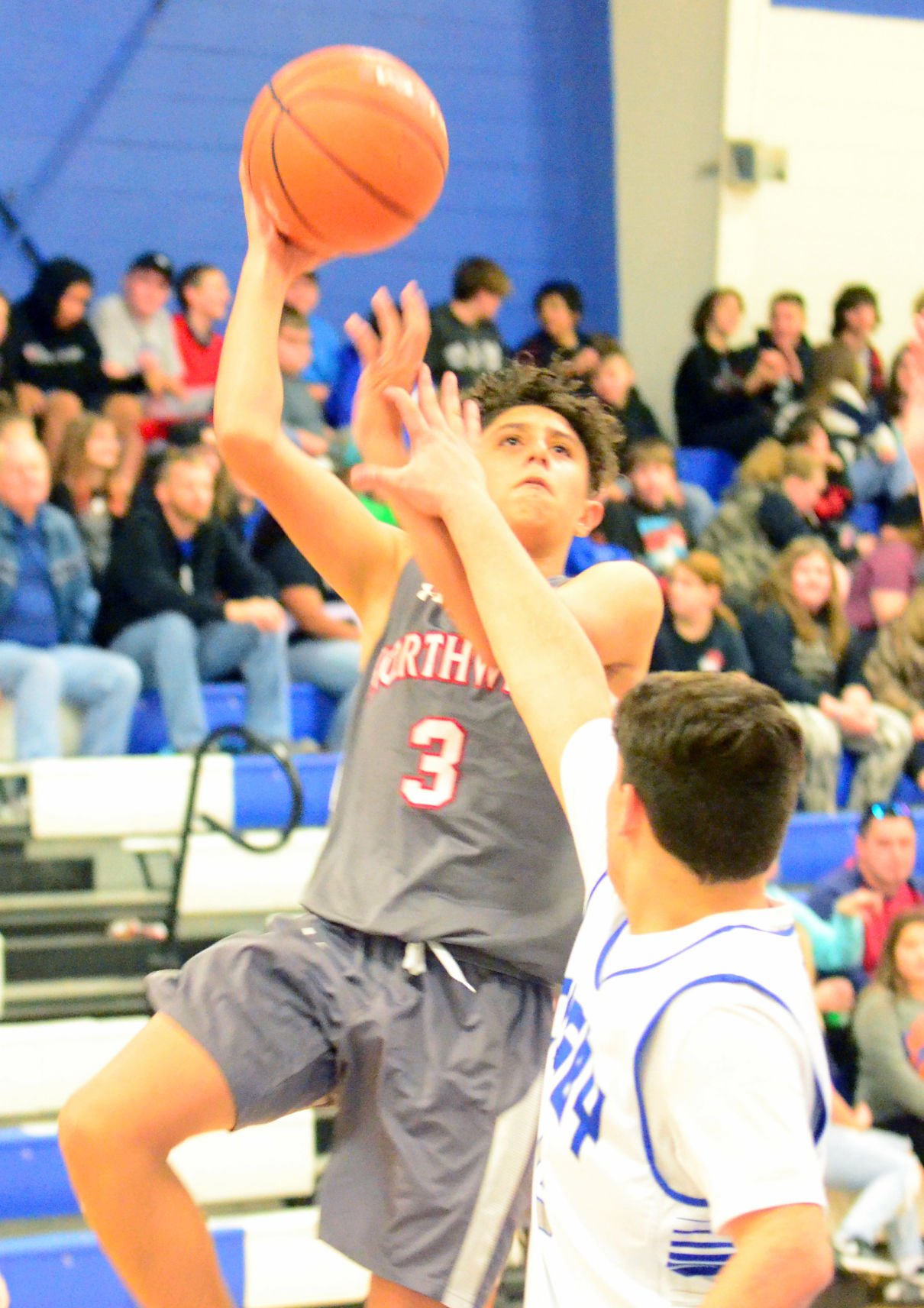 Tyson Sutton floats past a Cosby defender on his way to the basket. 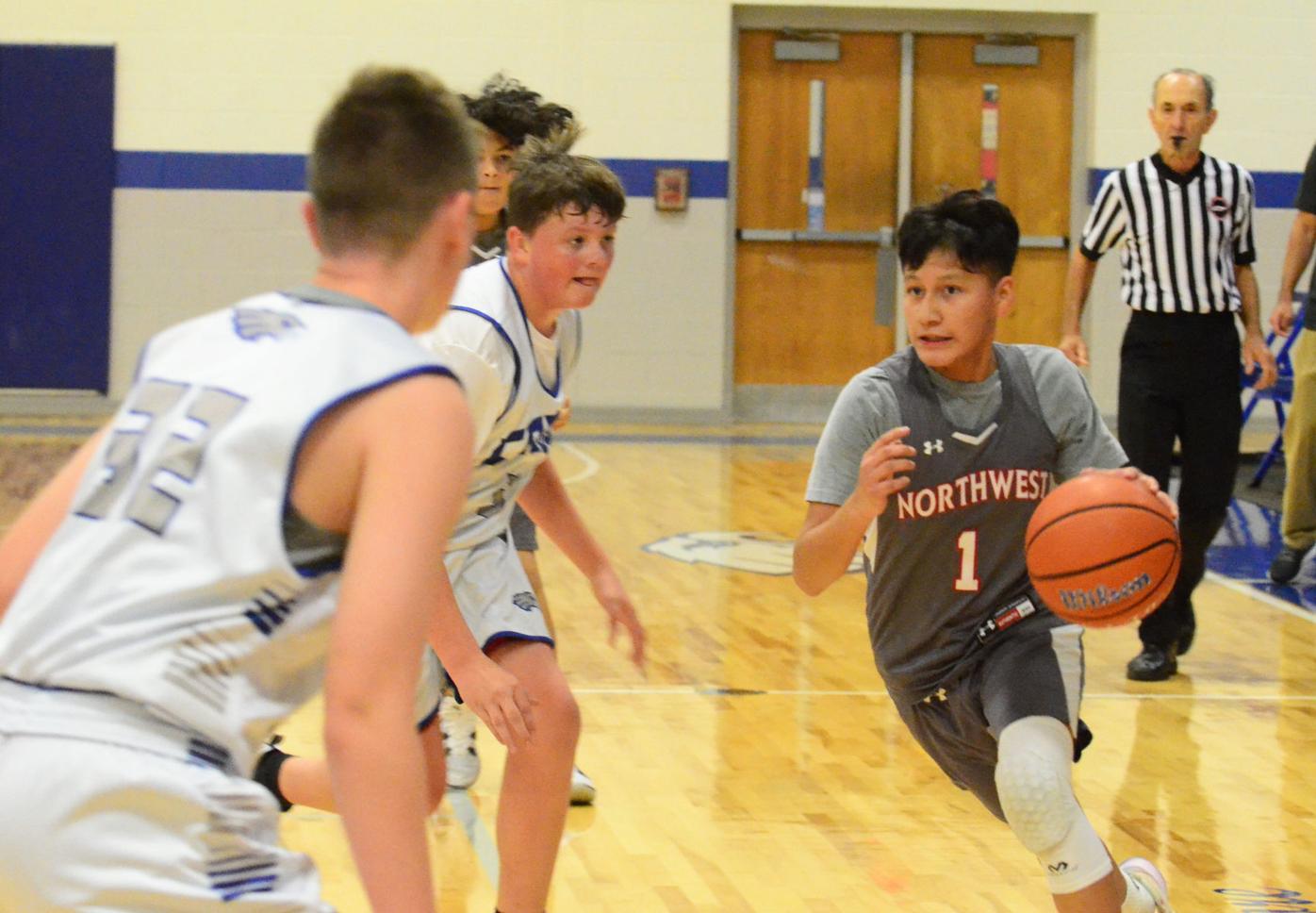 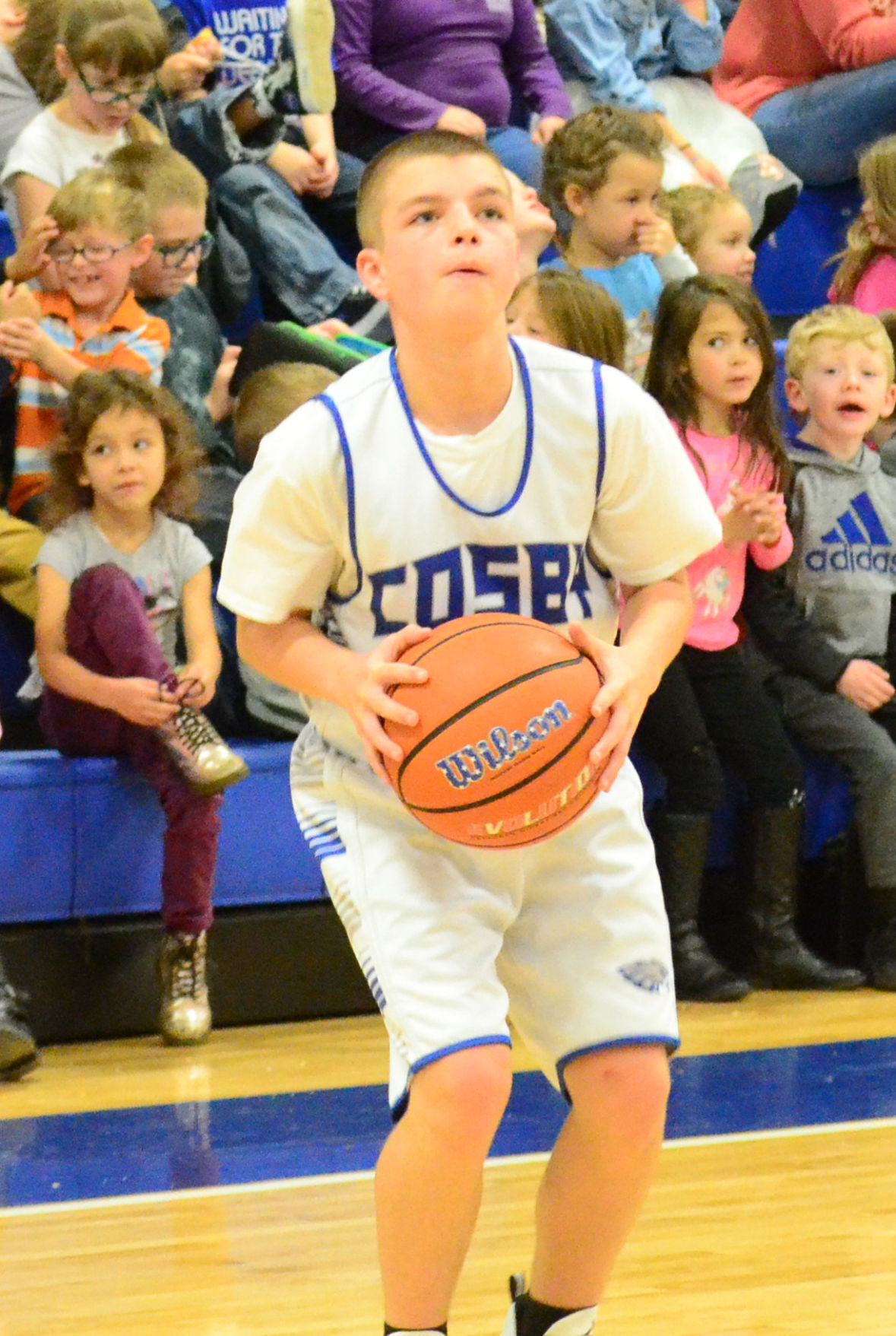 Payton Young eyes the basket before putting up a shot. 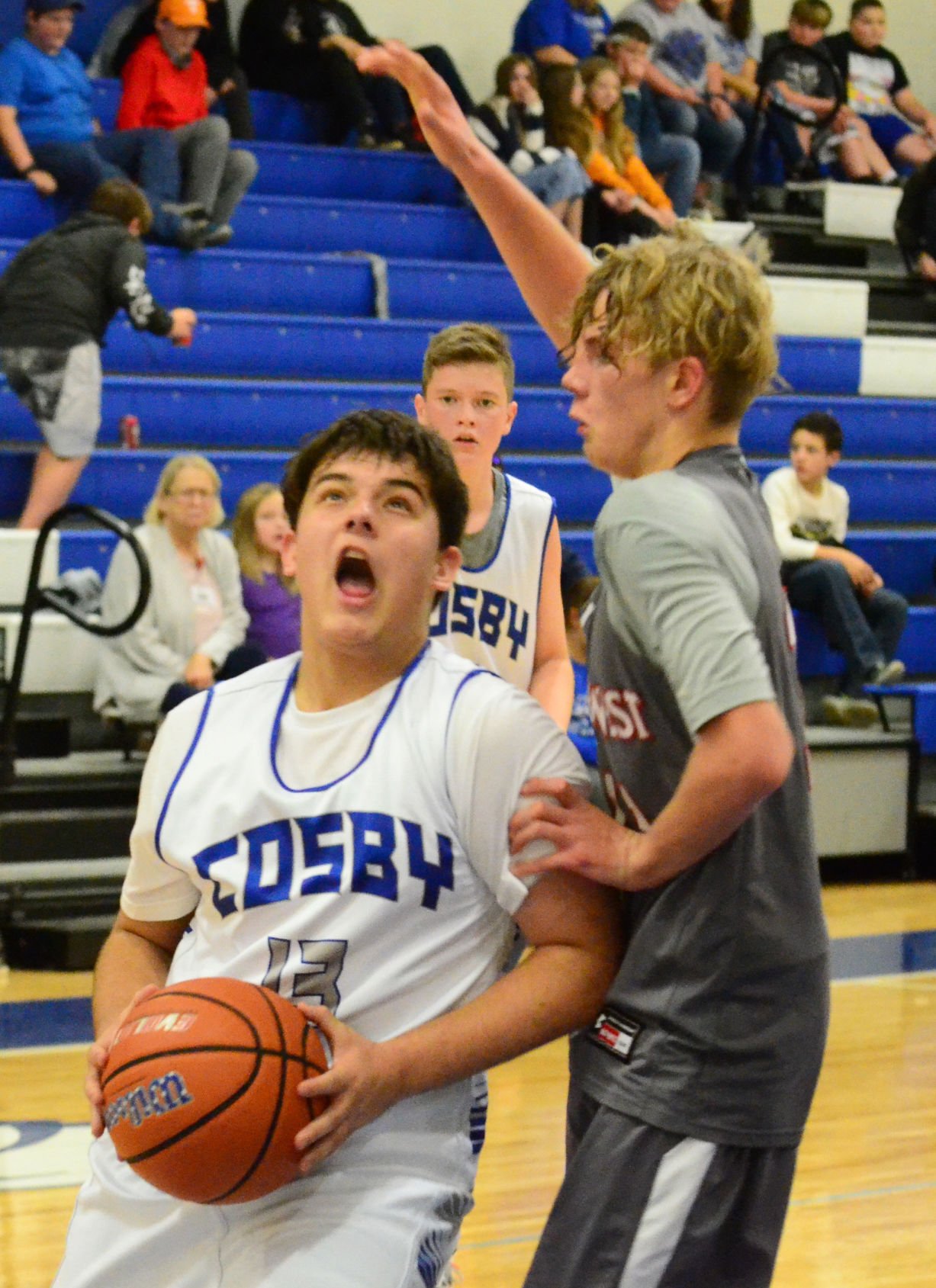 Cosby’s Dusty Lane attempts to put up a shot as he is closely guarded by Northwest’s Zander Hall. 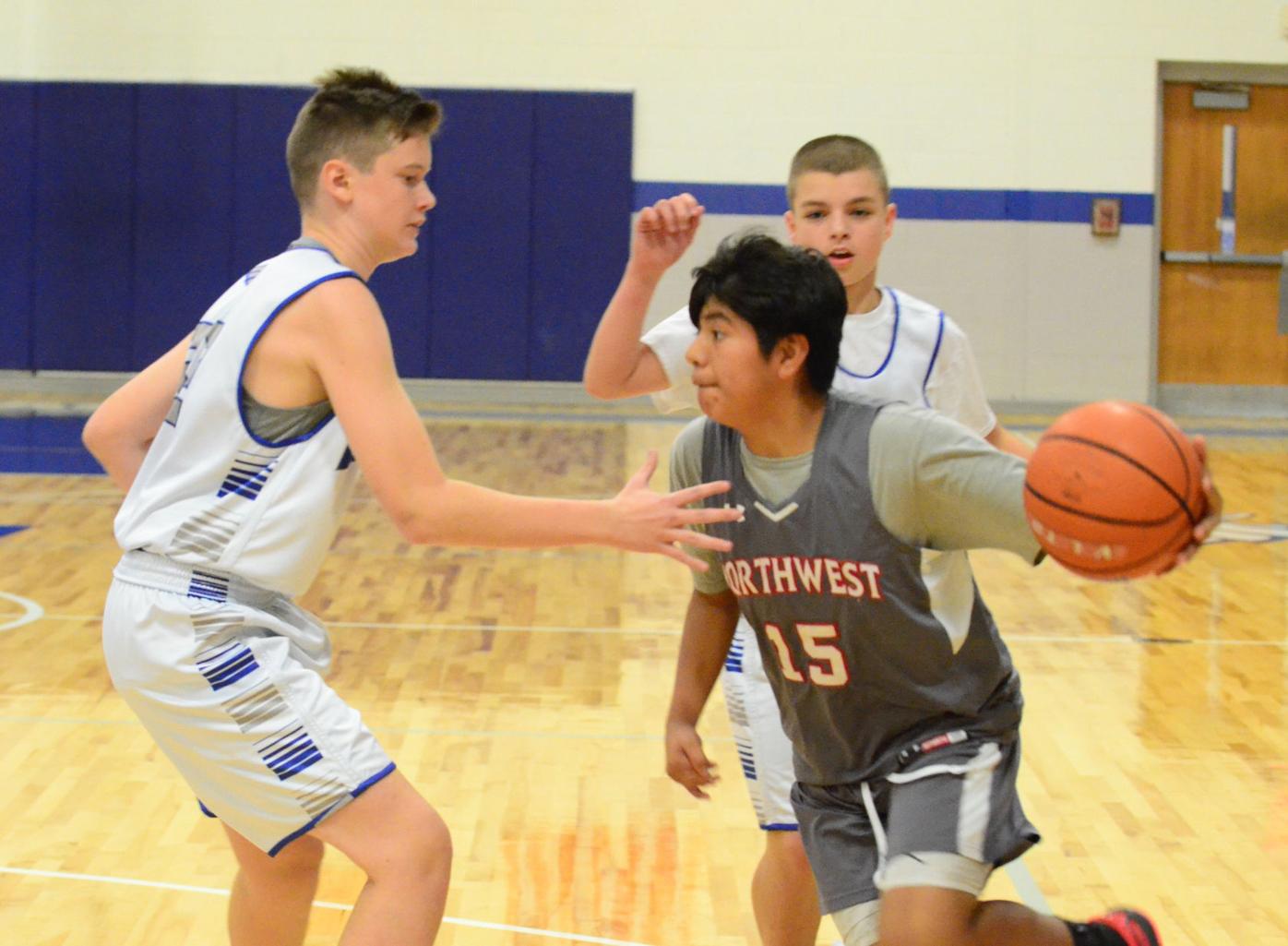 Tyson Sutton floats past a Cosby defender on his way to the basket.

Payton Young eyes the basket before putting up a shot.

Cosby’s Dusty Lane attempts to put up a shot as he is closely guarded by Northwest’s Zander Hall.

COSBY—The Northwest Patriots traveled to Cosby early Thursday morning to do battle with the Eagles on The Hill.

It was the first daytime game held this year during the elementary season. The Eagles came out swing on offense thanks to the hot shooting of Oaklon Cameron and Dusty Lane. The pair combined to score 11 of the team’s 13 points in the opening frame. The Patriots were down but not out of the fight as Tyson Sutton and Zander Hall kept Northwest within arms reach of the Eagles. The score was 13-11 after the first period of play.

The Patriots came out swinging in the second quarter and erupted for 22 points. Lead by Hall, five Northwest players put numbers on the scoreboard to help the team take a commanding lead. The Eagles once hot offense cooled in the period as they could only muster four points before the half.

Having thrown their best punch, the Patriots took a 33-17 lead into the locker room.

Both teams looked off to begin the second half as scoring was kept to a minimum in the third. The action picked back up in the fourth as Cosby attempted to mount a furious comeback. Lane and Cameron found their groove once again scoring a combined nine points for the Eagles.

Just as the tide was turning, Zander Hall and Donovan Campos-Nuci hit big 3-pointers to was away the Eagles chances. The final score for the game was Northwest 54, Cosby 39.

The Smoky Mountain Bears rolled over the Del Rio Trojans on Thursday. Christian Walsh led the scoring for the Bears, scoring all 12 of his points in the first quarter. Colby Pierce and Zayden Gunter each scored six points for the Trojans.

The Bears lit up the scoreboard in the first quarter, scoring 32 points. The Trojans put up 11 of their own in the first, but were unable to slow down the red-hot Bears offense. The teams went into the locker rooms at the halftime with a score of 15 to 42. Both teams put up six points in the third, and the scores held through the fourth, giving Smoky Mountain the win.

The Lady Parrots settled this one in the opening frame with 19 points. Brookelyn Clevenger posted 10 points in the first quarter. Jaylen Moore was the only Lady Panther to score in the first half as the Panthers went into the locker room down 32-4. The Lady Panthers ramped up the offense, posting six points in the third quarter, but it wasn’t enough to keep up with Parrottsville’s 16 points in the third. The fourth quarter was a formality in this one, as the Lady Parrots earned a big win at home.

The Parrottsville Boys followed the lead of their girls’ team, posting a big win over the visiting Panthers. Every active player scored for the Parrots, with Waylon Fox leading the charge at 12 points. Jamiel Smith posted a team-high six points for the Panthers.

The Parrots were in command of this one from start to finish, starting off on a 22-0 run in the first quarter, during which the Panthers went 0-for-4 from the free throw line. The Panthers finally got onto the scoreboard in the second, but the spread had still grown to 38-5 at the half. The Parrots offense slowed down in the second half, but they still outpaced the Panthers to finish the game at a 45-point margin.