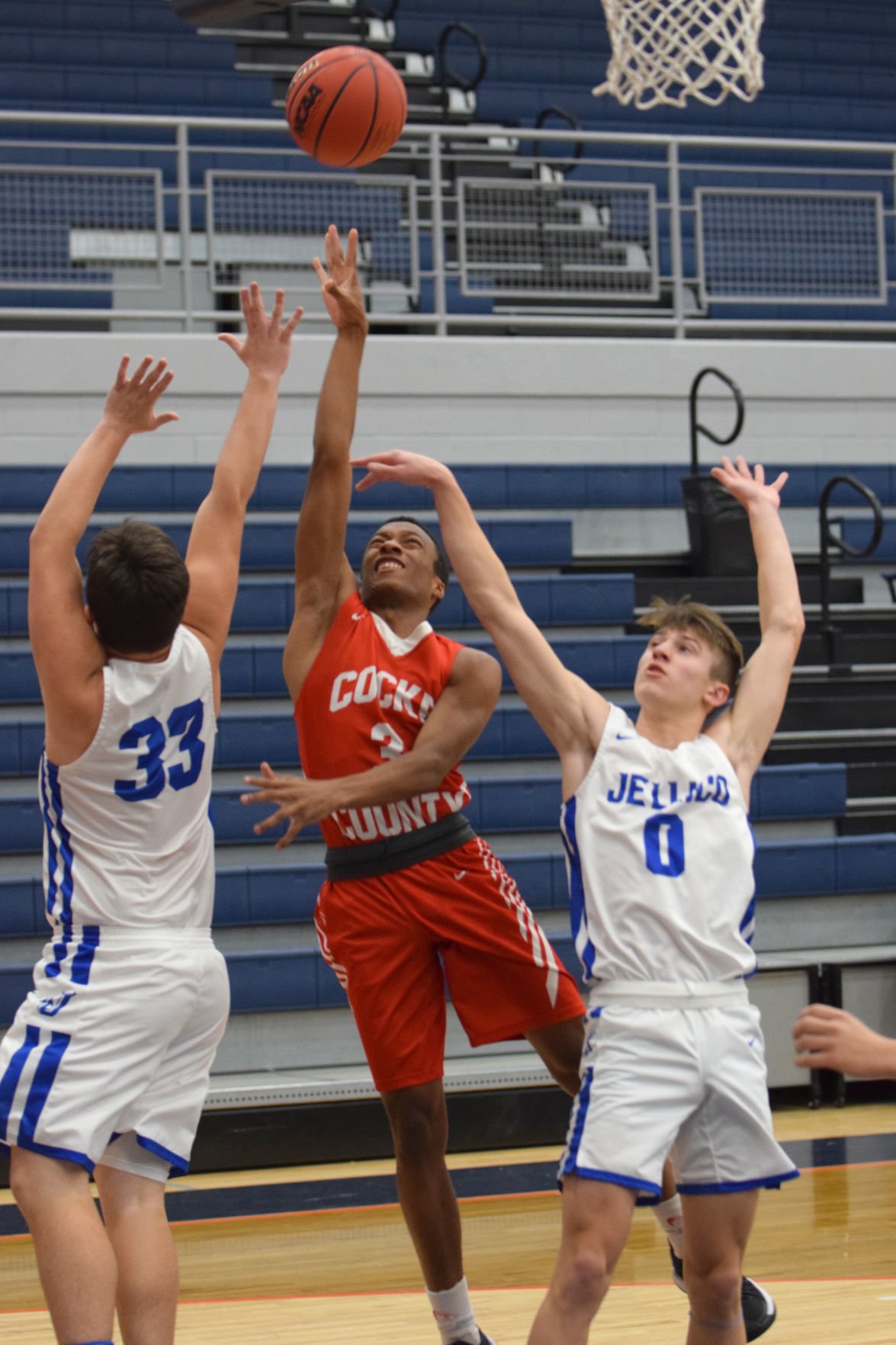 CCHS senior A.J. Mills puts up a shot between a pair of Jellico defenders on Tuesday. 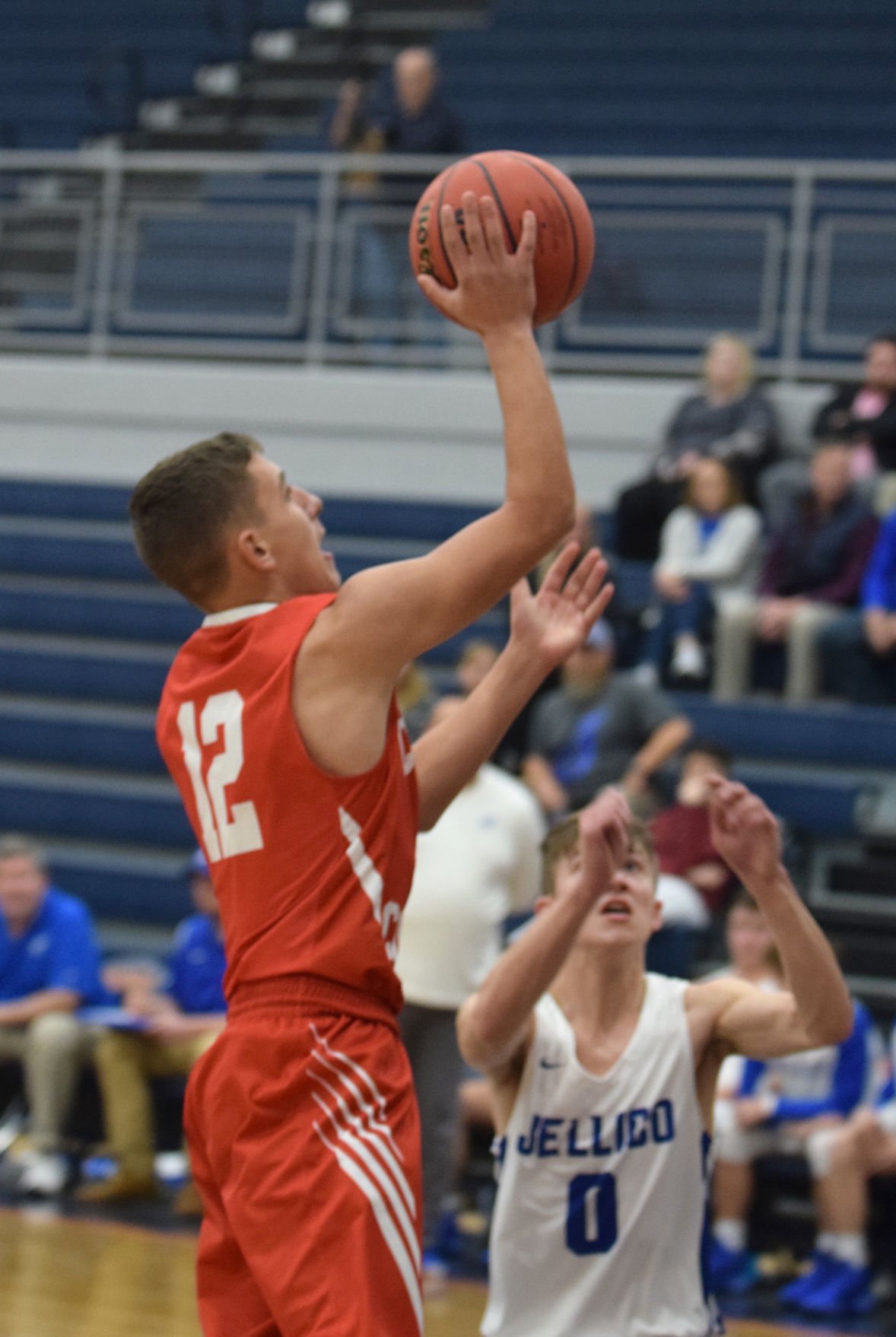 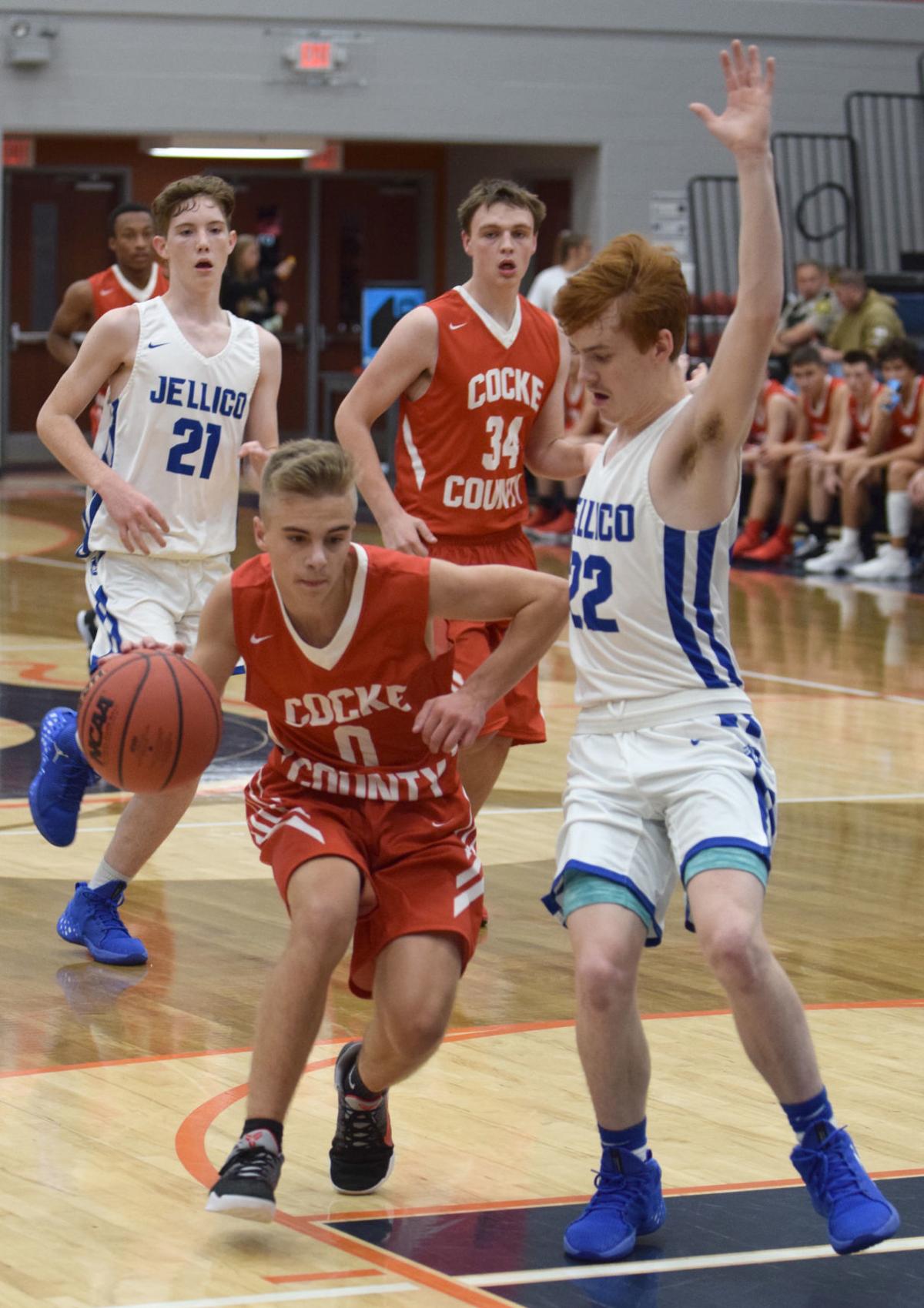 Cocke County’s Keaston Jackson lifts up a shot in Tuesday evening’s loss to Jellico at the Pizza Plus Grizzly Thanksgiving Classic.

CCHS senior A.J. Mills puts up a shot between a pair of Jellico defenders on Tuesday.

Cocke County’s Keaston Jackson lifts up a shot in Tuesday evening’s loss to Jellico at the Pizza Plus Grizzly Thanksgiving Classic.

Llewellyn caught fire early, and there was little Cocke County could do to disrupt his rhythm as he led Jellico to an 84-65 victory over the Fighting Cocks in the Pizza Plus Grizzly Thanksgiving Classic on Tuesday.

And he didn’t wait long after the opening tip, knocking down a 3-pointer and driving to the hoop to kickstart his 31-point effort.

The Blue Devils (1-1) never looked back after a 12-0 run in the second quarter gave them a 27-20 lead, a run which began with a pull-up jumper by Llewellyn. The freshman guard gunned in eight of his points in the second period, adding two more midrange jump shots before the half was over with the second giving Jellico a 41-28 advantage. Hayden Green’s fast-break layup made it 41-30 at intermission.

“It wasn’t just (Llewellyn). He shoots the ball well but our defensive effort right now is way below where it needs to be,” Cocke County coach Ray Evans said. “Not taking anything away from them, they can score. But the turning point was we stopped playing defense. Any time you’re trying to press and speed teams up and they’re driving right by you for layups, it’s not hard for them to score. Our defense was just horrendous tonight.”

Llewellyn scored 9 points in the first quarter and added 7 more in the third, following up a pair of midrange jumpers by hitting an off-balance shot through contact for an and-one as Jellico led 64-54 after three. The three-point play halted what had been a 17-7 run by the Big Red (2-2) with Corey Askew’s midrange jumper cutting the deficit to 61-54.

The Blue Devils answered, however, and closed the game with a 14-5 run including Llewellyn’s second 3-pointer of the game.

Bobby Zecchini tossed in 18 points for Jellico, finishing in the paint four times in the third quarter and twice more in the fourth after hitting a 3 from the left corner in the opening frame. His transition layup in the third quarter gave Jellico its largest lead until the final moments at 54-37.

Gracin Gerber added 12 points, knocking down a triple in both the second and third quarters.

But Cocke County’s offense didn’t fold as Jody Swann rallied the Big Red. Swann busted three of his four 3-pointers in the third quarter, and the third pulled CCHS within seven at 59-52. Swann led the way for CCHS with 19 points.

“He’s coming into his own a little bit. He’s shooting the ball very well,” Evans said of Swann. “He’s got to get stronger, go in there and rebound and finish around the rim. He shot the ball well tonight, but as a team we have to get more physical and defend.”

After drilling a 10-footer, Green hit from deep to spark Cocke County’s third-quarter spurt during which he drove to the basket.

“He’s just got to learn he’s a point guard and that’s part of growing,” Evans said. “Most teams, when you have a point guard that leads you in scoring, they’re not going to be really successful teams. We’ve got to get more ball movement. We played on half the court for most of the second half.”

Keaston Jackson’s layup capped an early 15-2 run for CCHS after the Fighting Cocks had fallen behind 6-0, and he knocked down a floater in the final seconds of the frame to put Cocke County up 19-13 after one quarter.

Jackson finished with 8 points as did Baylor Baxter, who finished in the paint three times in the fourth quarter.

AJ Mills converted an and-one to get Cocke County’s offense going in the first quarter, after which Cayden Fisher hit from the baseline and cleaned up a miss. Both finished with 6 points, and Askew closed Cocke County’s scoring with 4 points.

Trailing 20-15, Jellico then gunned in 12 straight points as Jordan King and Bryan Leffew each hit a 3-pointer. Kade Evans put the Blue Devils ahead for good at 23-20 with his putback through contact for an and-one.