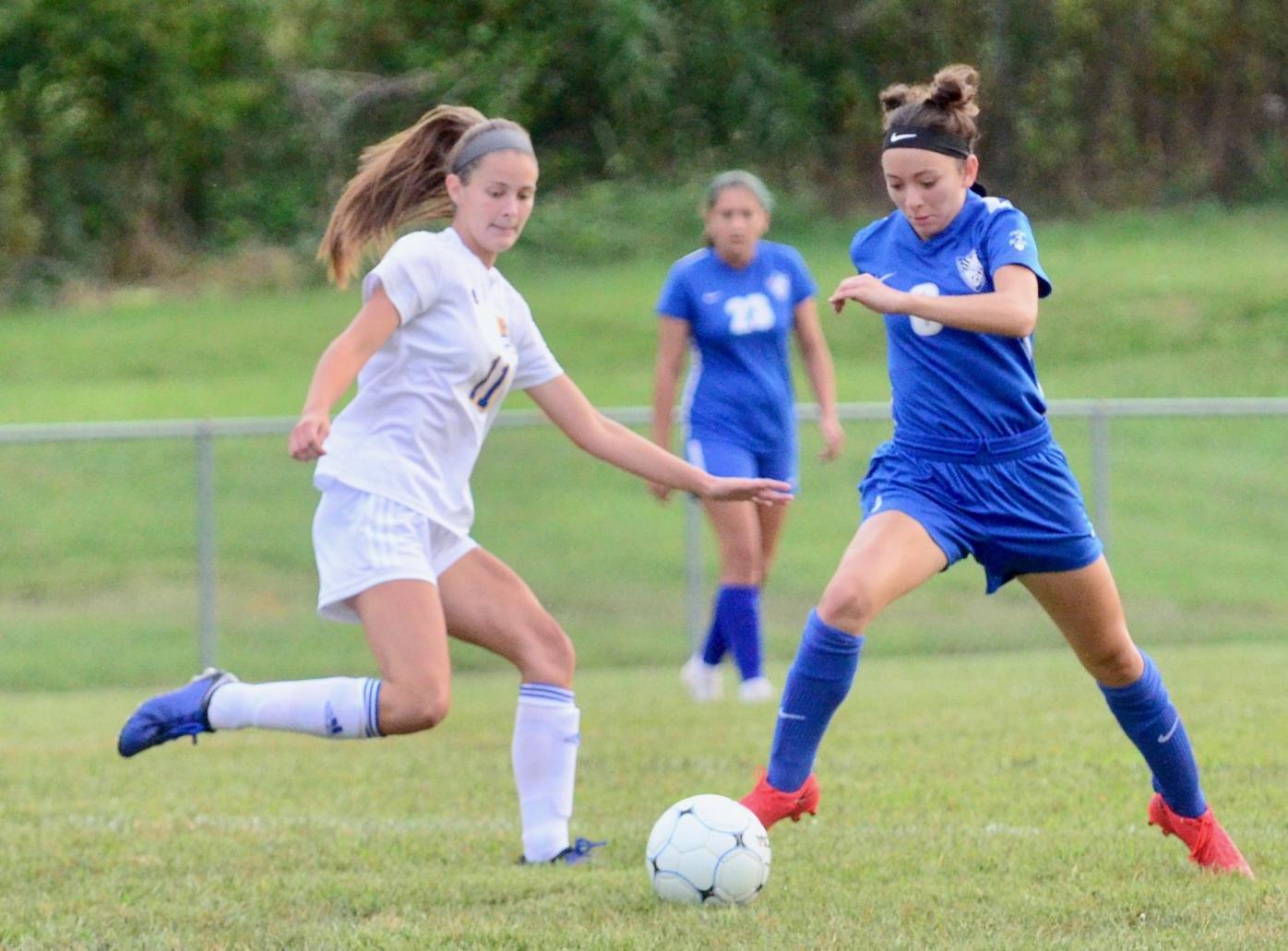 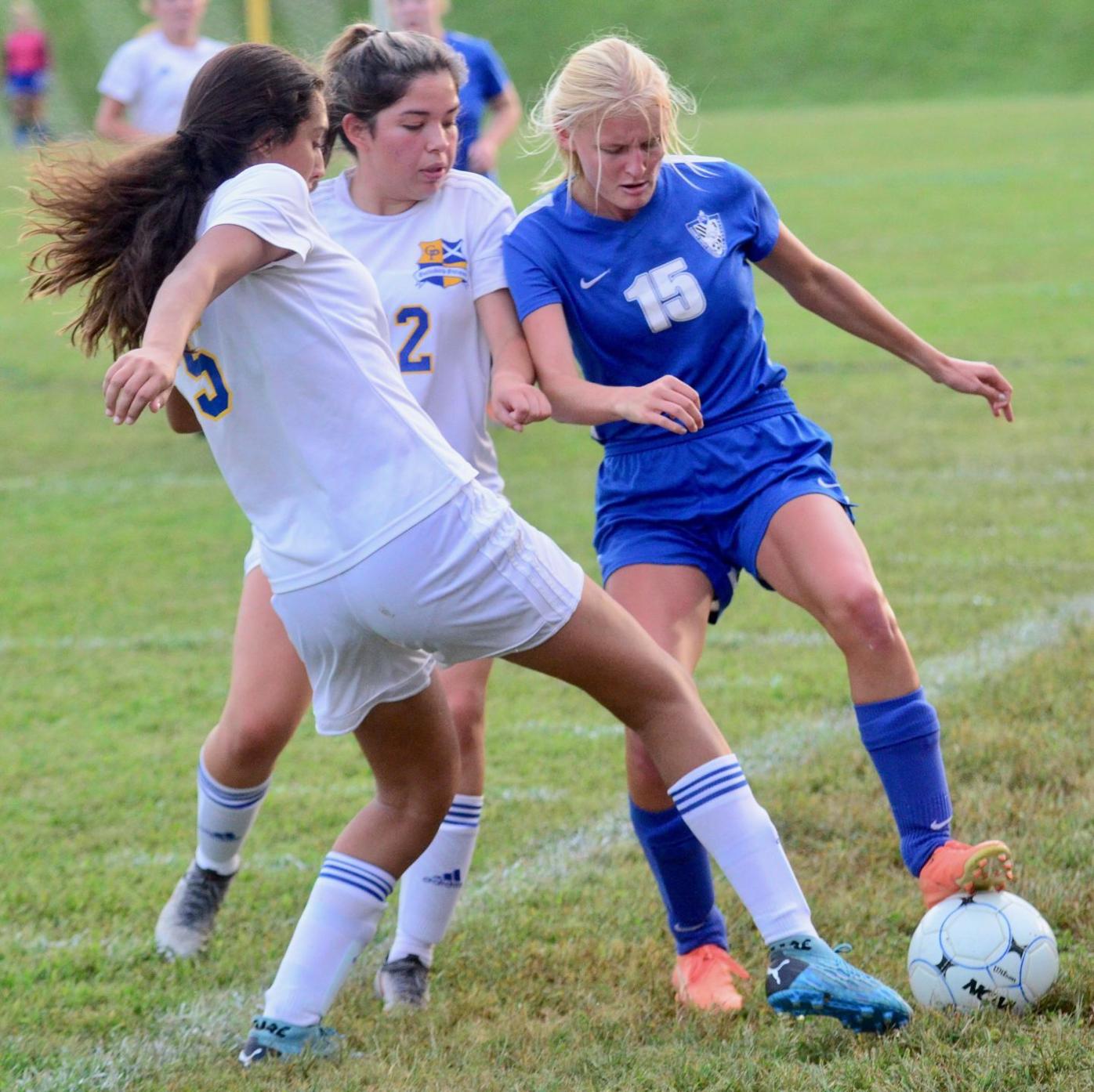 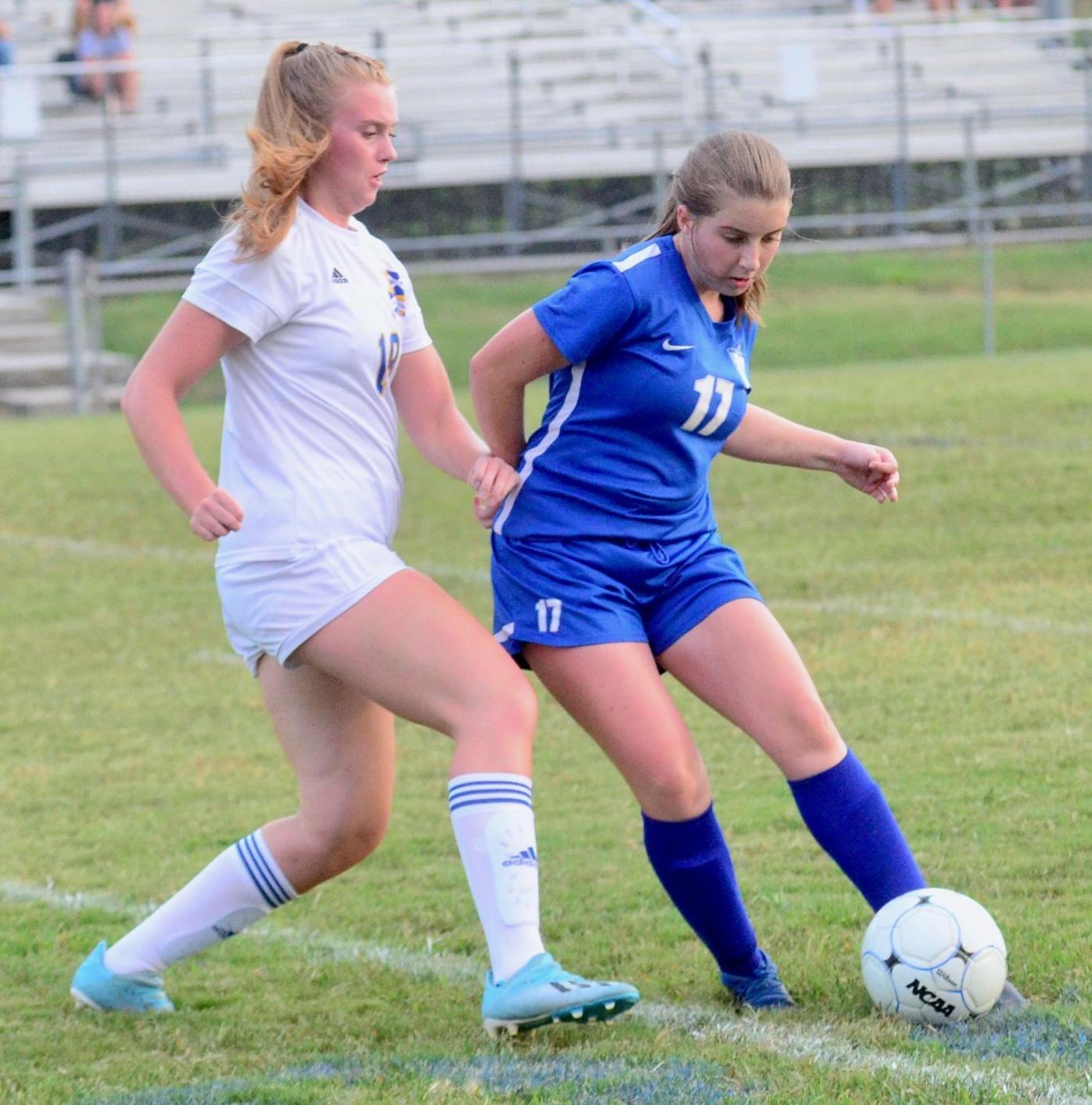 Lady Eagles sophomore Kaymen Moss (right) cuts off Gatlinburg-Pittman's Emma Shultz during the first half of Tuesday's District 2-A victory over the Lady Highlanders. 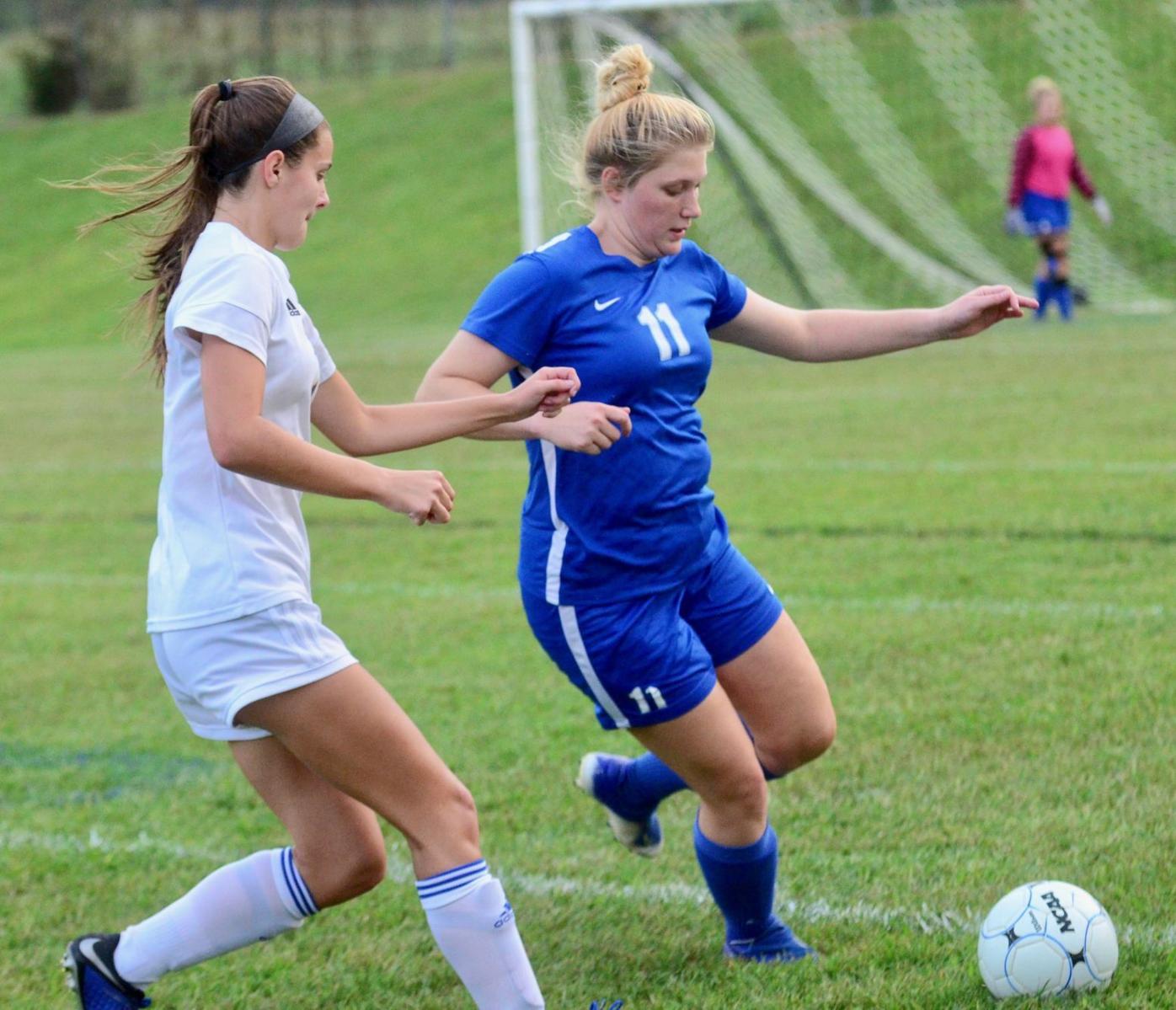 Lady Eagles sophomore Kaymen Moss (right) cuts off Gatlinburg-Pittman's Emma Shultz during the first half of Tuesday's District 2-A victory over the Lady Highlanders.

COSBY—If the Cosby High Lady Eagles are able to reel in the first district title in program history, this season, they’ll certainly look back on Tuesday’s victory as the key moment that helped them get there.

Despite trailing early in the match, Cosby rallied with four unanswered goals to pick up a crucial 4-2 win over District 2-A rival Gatlinburg-Pittman on Tuesday.

Cosby (6-1-1, 2-0 District 2-A) now controls its own destiny in the chase for the regular season district title, as it’ll have its chance to claim the crown that has just eluded the program the past three seasons.

“We have to take care of Alcoa,” Cosby coach James Groat said. “Some people look at their record right now and think they’re struggling, but I can assure you they are not. They’re playing a ridiculous schedule over there, so the record doesn’t even tell half the story.

“Alcoa is always the team to beat in this district. We were fortunate to beat them in the region tournament last year, but winning the district will still run through them.”

Even with the season past the midway point, the Lady Eagles are still moving pieces and experimenting with formations to find what works best before nearing the postseason.

One player who’s spot has been jostled around from the beginning is McKenzie Owens, who’s played forward, midfield and line backer to this point in the season.

On Tuesday her place was on the Lady Eagles’ back line, as that move proved pivotal in Cosby’s comeback bid.

“McKenzie played the best game I’ve seen her play all year,” Groat said. “She was the spark plug to our team, today. If she plays like that every game, we’ll be tough to beat. She was huge in the second half. She shut everybody down.”

The back line has been the story of the Lady Eagles’ season after the program graduated three of the four members that led the defense during last year’s state tournament run.

After giving up two goals in six minutes to start the game, the group showcased tremendous strides in keeping Gatlinburg-Pittman out of the net for the rest of the night.

“Arden Pack has been an incredible leader for our back line,” Groat said. “I’ve been hard on her, but she’s taken everything head on and is doing an outstanding job.

“She took (Kylie) Hall’s spot, which was the leader on our defense last year. She’s the one that came to me and said she wanted to take on that task, and she’s been a leader back there. She keeps our back line going.”

Gatlinburg-Pittman had a 2-0 lead by the sixth minute of Tuesday’s matchup.

Kaiya Walker’s shot was deflected in the box, leading to G-P’s first goal in the second minute. Lillian Lopez notched the second goal to solidify an early lead for the Lady Highlanders.

“It was my fault,” Groat said. “I changed our formation again, going with a 4-3-3, because I wanted to attack. Last time we played they had so many back on defense, so I wanted to give us a better chance to go score.

Cosby struggled to maintain possession throughout most of the first half, while G-P continued to go after the goal to put the game away early.

The Lady Eagles finally got a spark after Leia Groat scored on a volley in the box, cutting Gatlinburg-Pittman’s lead in half in the 30th minute.

“That was huge for us,” James Groat said. “We needed something positive to send us into the half. I don’t always give Leia the compliments and credit she deserves, but this was the best game she played all year.”

Leia Groat’s goal would prove to be a seminal moment in Tuesday’s matchup, as it was just the spark of life the Lady Eagles needed before heading into the half.

The Lady Highlanders still led 2-1 to begin the second half, but Cosby quickly overcame that deficit with goals in the first seven minutes of the half.

Leah Murray tied the game with a goal in the 45th minute, and followed with the go-ahead goal in the 47th minute on a free kick from distance to propel the Lady Eagles to a 3-2 advantage, their first lead of the night.

“Our seniors took charge of this one,” Groat said. “We didn’t even have to talk. They took care of everything. You could tell how bad they wanted this win. Our seniors brought our girls together and got everyone’s mind right for the second half.”

Cosby dominated the second half with heads up play on the back line, and aggressive midfield play that refused to let balls get past midfield for the majority of the final 40 minutes.

“Ava Carver gave us some incredibly huge minutes,” Groat said. “She’s just a freshman, and we’re still getting her to understand how important she is when she’s on the field. She had a huge assist to end the game. We need her, and all of our underclassmen to contribute if we’re going to be successful.”

G-P challenged late with a few close shots on goal, but Daycee Weeks kept every attempt sent her way out of the net. Instead, Cosby put the game away with a Leia Groat goal — assisted by Carver — in the 76th minute, giving the Lady Eagles a 4-2 lead they were able to finish the game with.

“G-P is coached well,” James Groat said. “Coach (Caleb) Keener always has them playing like a top program and does an excellent job over there. It’s always a compliment to be able to defeat a program so well built, but I really hope we don’t have to see them again, this season.”

The Lady Eagles have a week in between contests before returning to the pitch. They’ll remain at home on Tuesday, Sept. 22 to host Northview Academy at 6:30 p.m.

That matchup will also mark the program’s annual senior night.