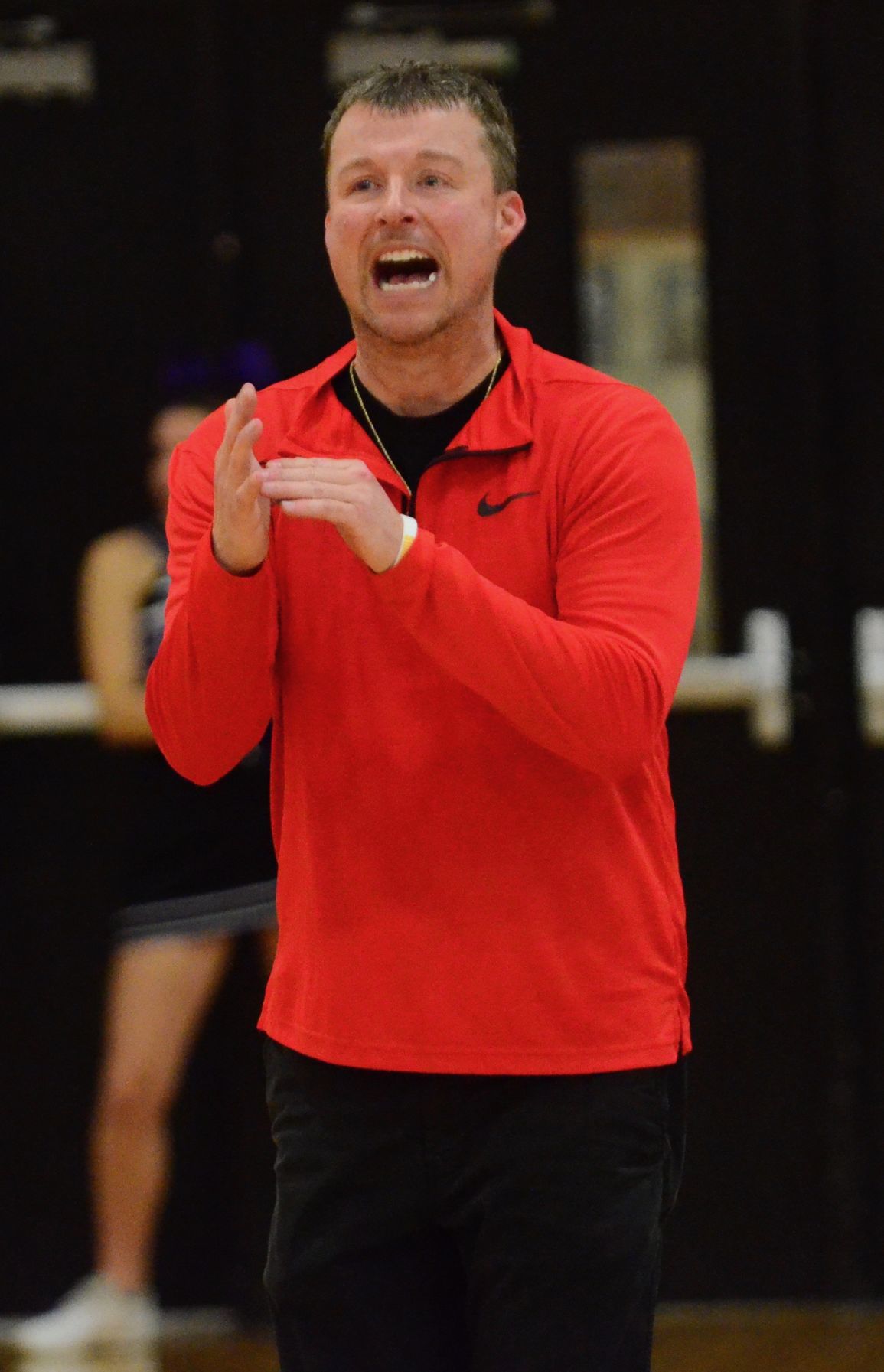 FILE — Jeremy Byrd calls for timeout during a district matchup between Cocke County and Sevier County in 2020. 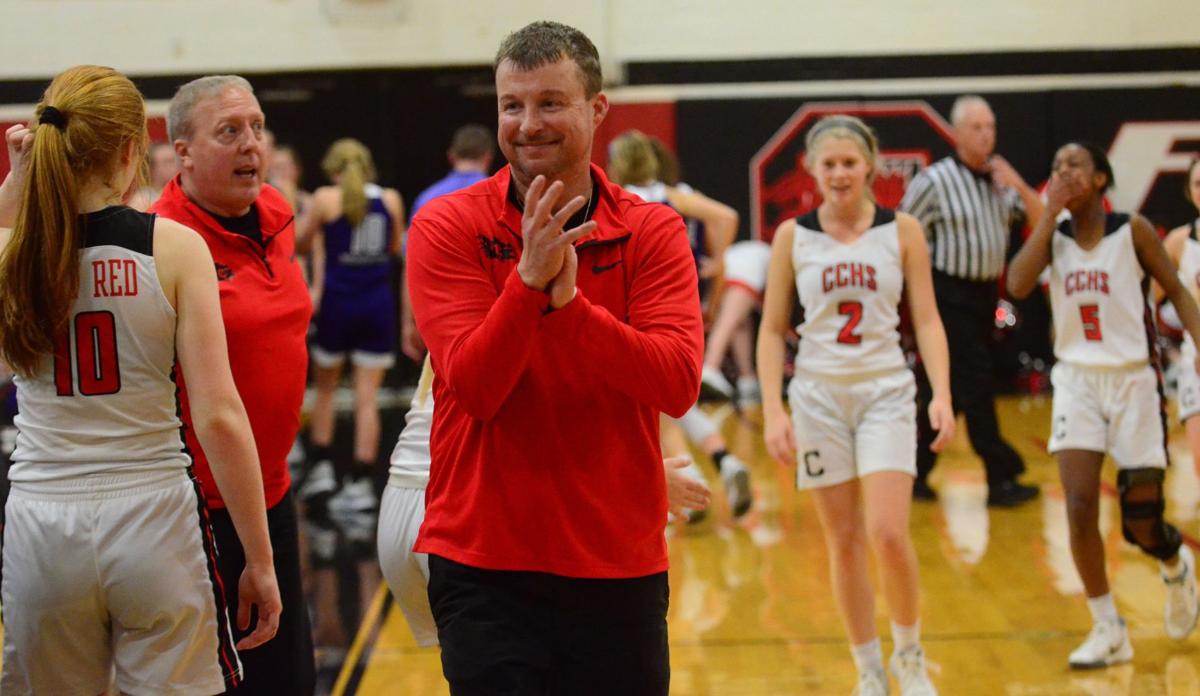 FILE — Jeremy Byrd and the CCHS Lady Red celebrate a district win over Sevier County in 2020.

FILE — Jeremy Byrd calls for timeout during a district matchup between Cocke County and Sevier County in 2020.

FILE — Jeremy Byrd and the CCHS Lady Red celebrate a district win over Sevier County in 2020.

NEWPORT—Saying goodbye is never easy. Even less so when you’re leaving the place that gave you your start in your career.

Cocke County High School basketball took another hit less than 24 hours after Ray Evans announced his resignation from being the school’s boys’ head basketball coach. On Friday, girls’ basketball and volleyball coach Jeremy Byrd announced he was resigning his position.

“Coach Byrd has been a great asset to Cocke County High School as a coach, teacher, and as a person,” CCHS athletics director A.C. Willis said. “He has worked tirelessly to ensure both out volleyball and girls’ basketball teams are in great shape moving forward. Both are loaded with talented young ladies and ready to compete for championships.”

Byrd resigned as the program’s head coach to take the head coaching vacancy at Jefferson County High School, which was vacated by the retirement of longtime coach Rick Sinard at the conclusion of the 2019-20 season.

“This is the most difficult thing I’ve ever had to do in my life,” Byrd said. “I’ve given everything I had to this program for the last eight years. Every group I ever had was special, but this group in particular holds a special place in my heart.

“That’s what made this decision so difficult. I lost sleep all week thinking about what I was going to do once I was offered, but in the end it was the right decision for me to make at the right time.”

Lady Red basketball assistant Darrell Lane will assume the role of interim head coach of the program while a coaching search is conducted. Willis provided no set timetable on when he hopes to have a permanent replacement named, but is dedicated to finding new coaches for both programs in the near future.

For Willis and the CCHS administration, the challenge is set to fill three positions over the offseason. After former boys’ basketball coach Ray Evans resigned as head coach of that program on Thursday, Byrd leaves behind vacancies in both girls’ basketball and volleyball for the upcoming athletics year.

“Not only are we replacing two basketball coaches, but also a volleyball coach,” Willis said. “This is certainly a huge challenge, but we are facing it head on to do what is best for our student-athletes.

“Our principal, Gail Burchette, will be involved in any decision that also affects the classroom. I will also reach out to numerous individuals for references to help us fill those positions in a timely manner.”

During his time with CCHS, Byrd amassed 114 victories, including a district championship victory in his first season as the program’s head coach. Also in that first season, he held a 21-10 record and led the Lady Red to their first region tournament appearance since 2009.

“We turned the program around the very first season I was here by winning the district,” Byrd said. “That, along with several other memories I’ve made here will always stick with me. From there we really built an identity and culture around us. My eight years here is something I’ll always cherish.”

After eight seasons, Byrd will now sit on the opposite sideline of the Lady Red for at least two games per season as he ventures off to district rival Jefferson County.

“It’s going to be difficult to have to see these girls twice a year,” Byrd said. “I already know that for a fact. Especially coming (back to Cocke County). Having to sit on the opposite bench I’ve sat for the last eight years won’t be easy.”

In his final year with Cocke County, he led the program back to the region tournament after an effort that secured second place in the regular season District 2-AAA standings. CCHS secured three consecutive winning seasons in Byrd’s final three years with the program, as it held a combined record of 47-38 from the start of the 2017-18 season through the end of this past season in 2020.

Byrd also served as the team’s volleyball coach for the last two seasons. After a 6-12 start in his first season, the program improved to a 12-13 record in his second season, including two victories in district play.

“The volleyball girls have been through a lot,” Byrd said. “But I’m proud of what we were able to accomplish my two seasons with them. In two years we were really heading in the right direction. So it’s hard to leave that progress behind, but whoever takes over the role will have a tremendous group to work with.”

At the end of his second season, Byrd was named the district’s coach of the year after the team’s improvements from their first season.

With a new destination set comes plenty of change. Byrd will no longer serve as a multi-sport coach as he had for the last two academic years at Cocke County, but will rather hold only the title of girls’ basketball coach at Jefferson County.

Many factors went into Byrd’s decision to leave CCHS for the vacancy at JCHS. At the end of the 2020 season he immediately went to work on plans to improve for the 2020-21 campaign with Cocke County, but it wasn’t until recently that plans began to change.

“This was eerily similar to the first offer I received after graduating college,” Byrd said. “I never applied for the position. I was contacted by the athletic director at Jefferson County, who reached out after asking permission from A.C. first. I thought I’d at least hear them out even though I had no intentions of seeking another position.

“During the interview, things just felt right. That’s when I started to concern the job and began weighing my options. In the end, it wasn’t about the money or the kids. It just felt like it was the right decision to make at the time.”

In the end, Byrd leaves behind a talented group that broke barriers this past season.

The Lady Red will return four starters and all but two players from the 2019-20 campaign that saw them make the program’s first region tournament appearance in seven years. It’s that group that Cocke County’s departing coach feels will have the program’s best days ahead of it.

“My main message to the girls before leaving them was to finish what they started,” Byrd said. “There’s no ceiling for this group. I know they’re going to find someone that will do a better job than I have to come in and lead this program, and I know these girls are destined for great things in their futures.”