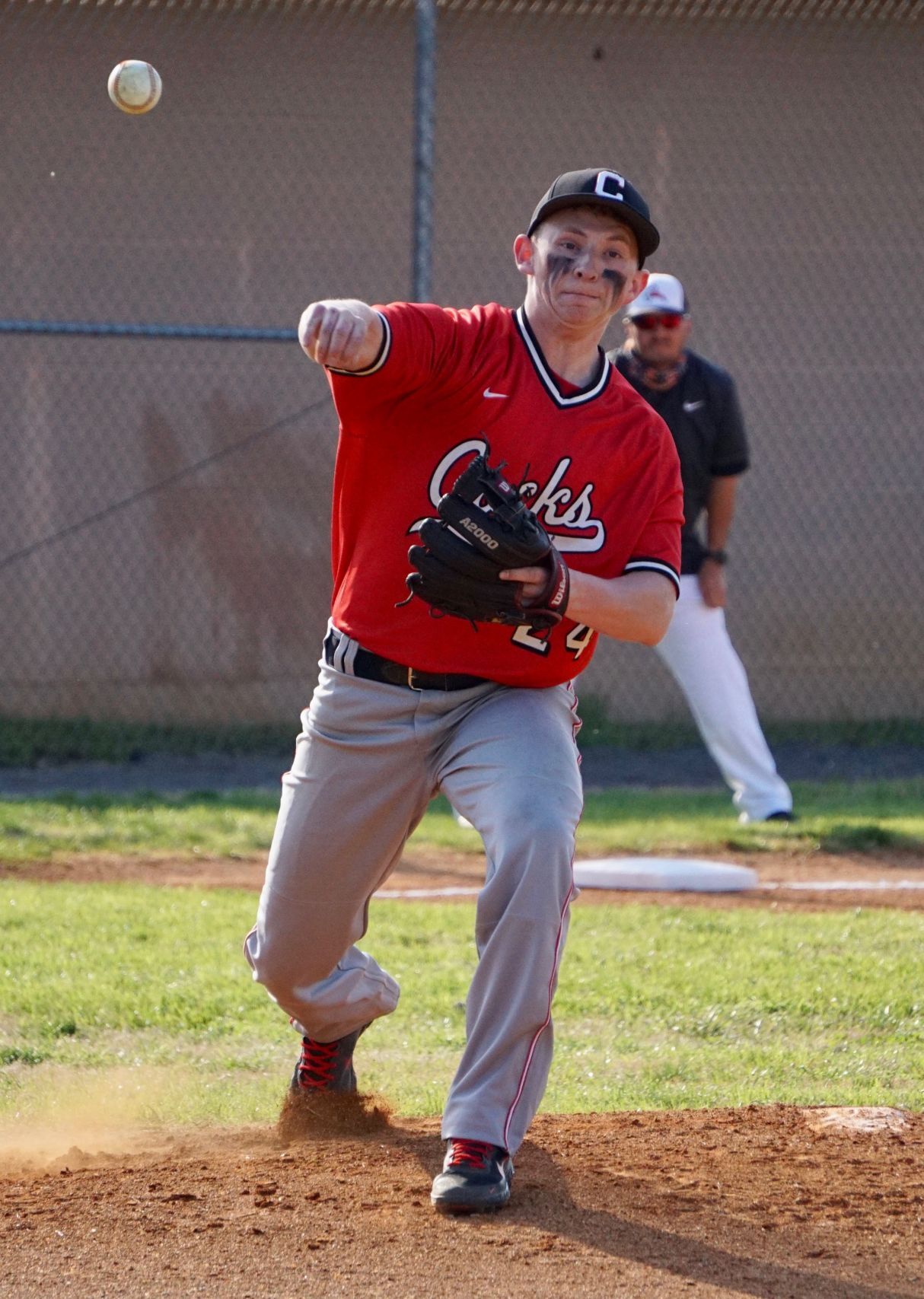 CCHS junior Bryce Click throws to first for a routine out in Tuesday’s 4-3 District 2-AAA win over Morristown East. 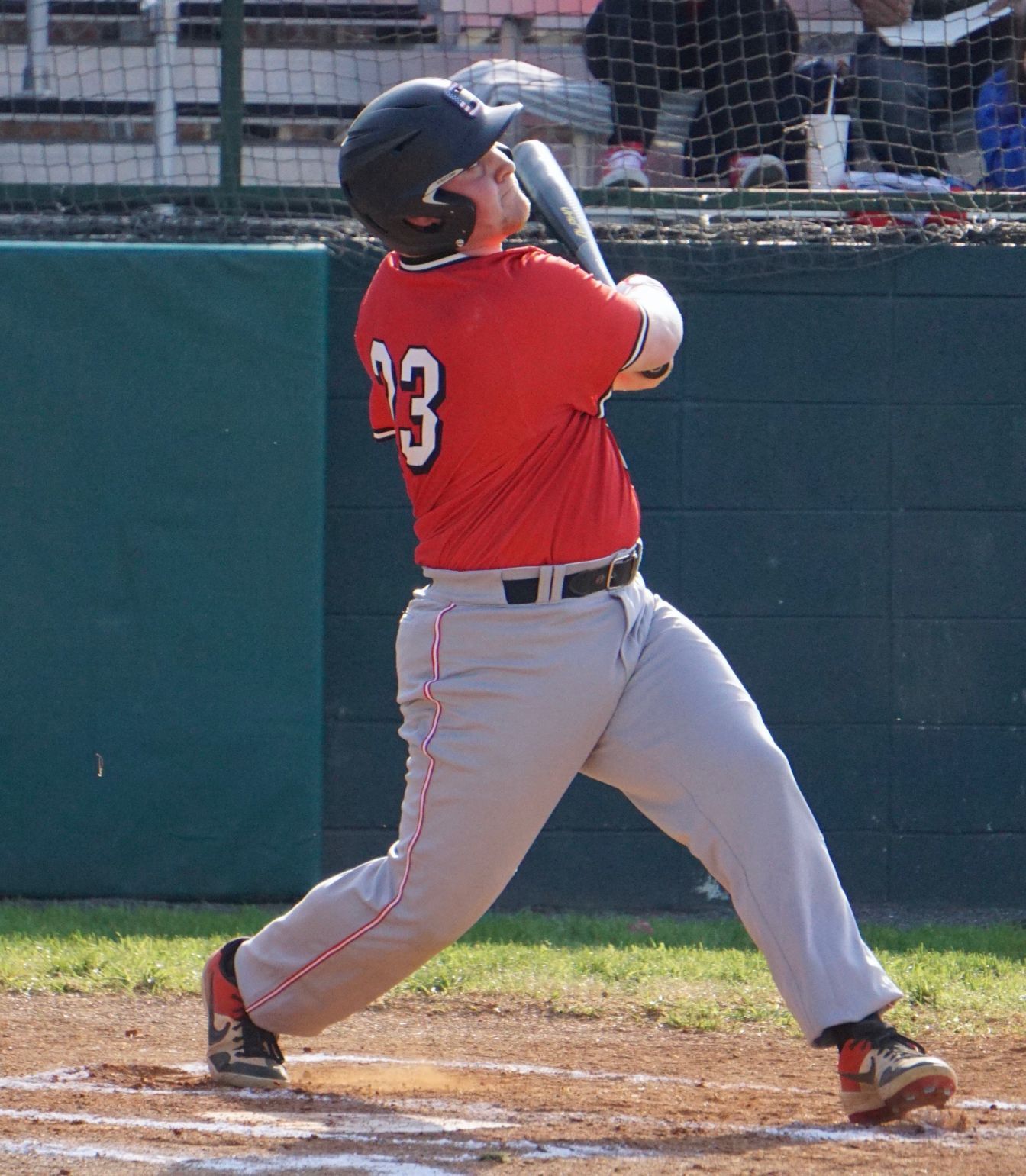 CCHS senior Jacob King watches the flight path of a ball he hit in Tuesday’s 4-3 district win over Morristown East. 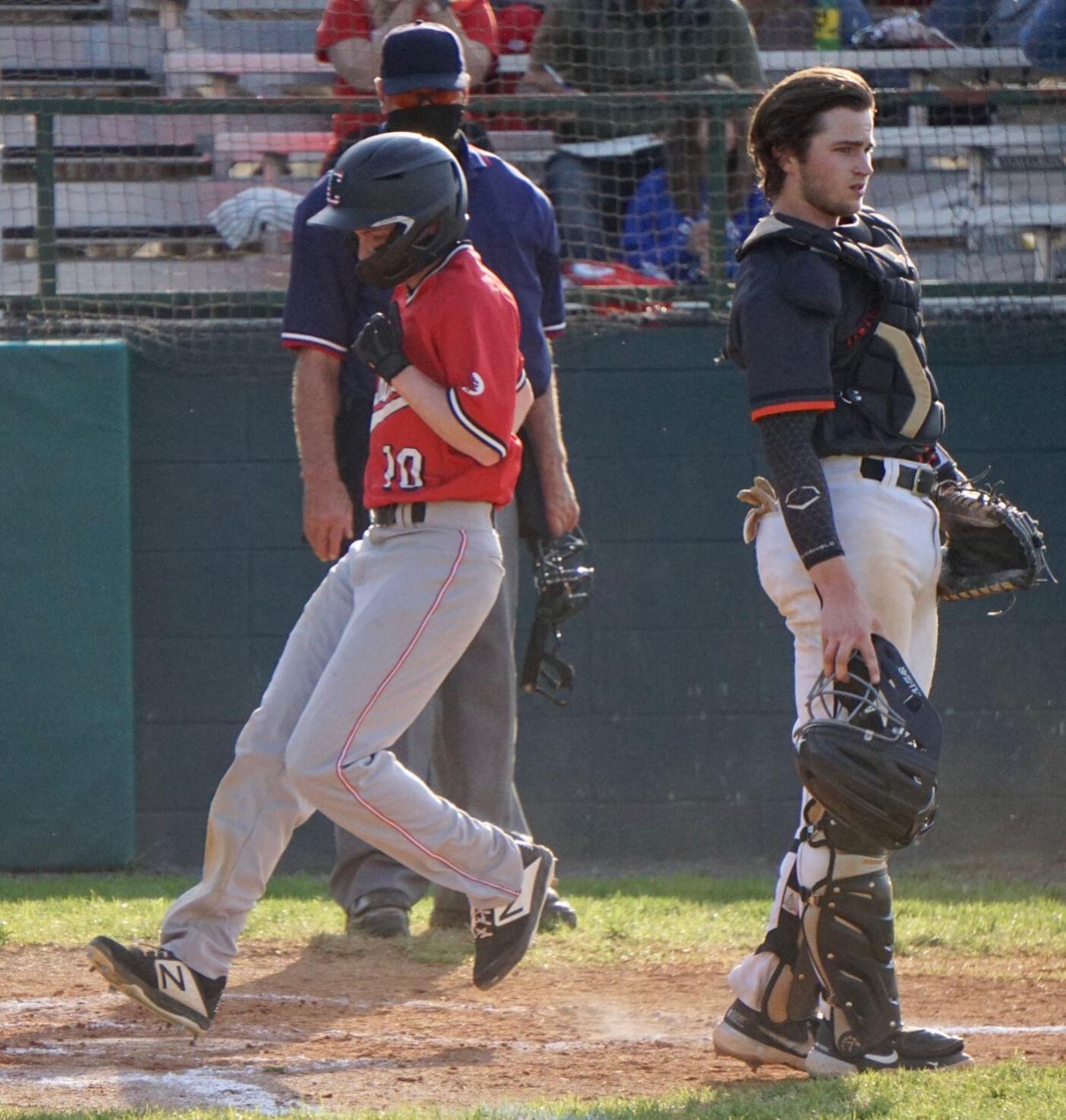 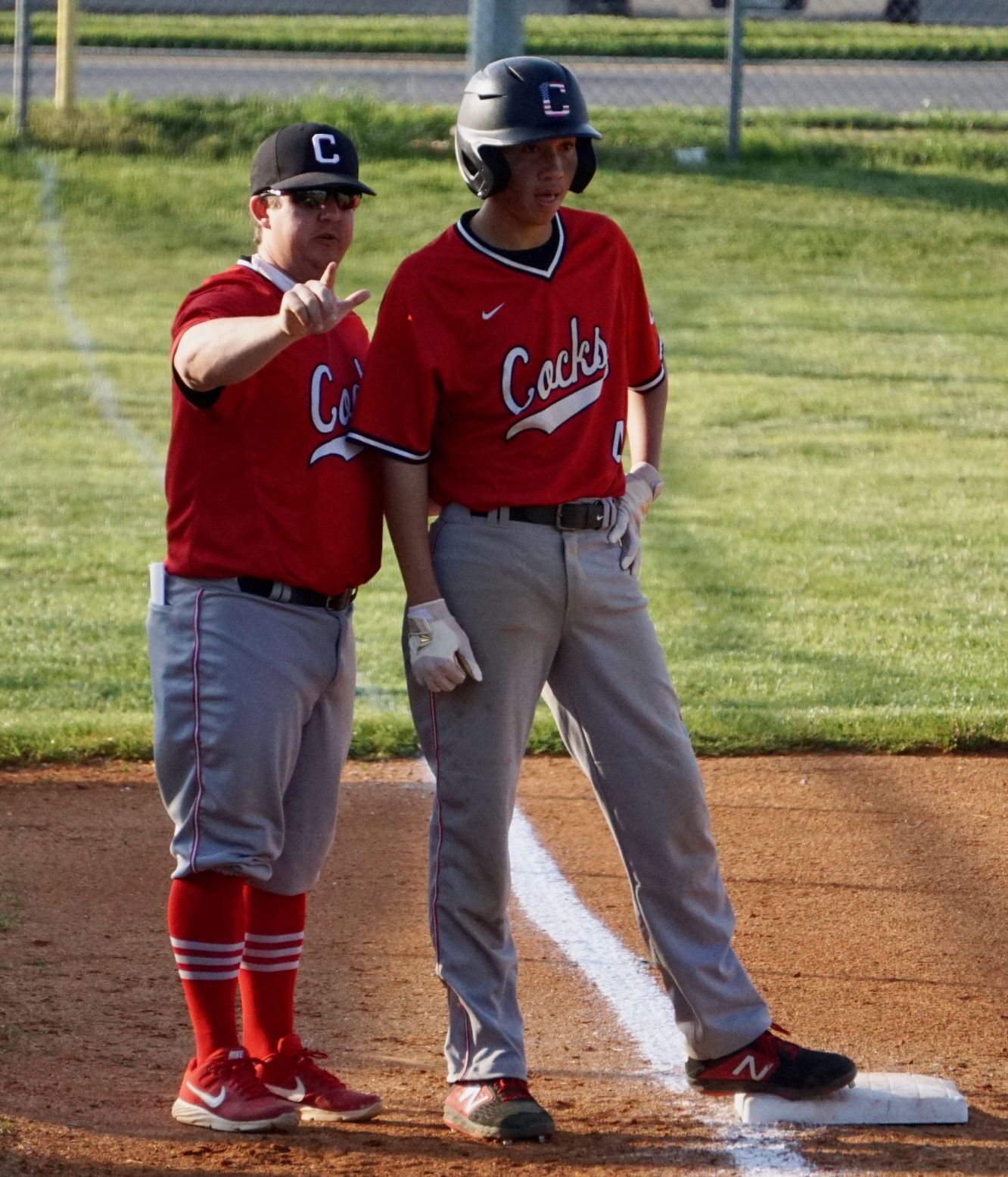 CCHS junior Bryce Click throws to first for a routine out in Tuesday’s 4-3 District 2-AAA win over Morristown East.

CCHS senior Jacob King watches the flight path of a ball he hit in Tuesday’s 4-3 district win over Morristown East.

MORRISTOWN—Just 24 hours removed from a 5-inning, 12-run loss to the same opponent, it all came together for the Cocke County Fighting Cocks.

In game two of a 2-game series with Morristown East on Tuesday, the Fighting Cocks responded from a 16-4 loss the night before with a gritty 4-3 win over the Hurricanes.

“Last night we talked about how we were going to learn a lot about our team tonight,” CCHS coach Andy Chrisman said on Tuesday. “We certainly did. They came out and fought with everything they had today. We call them the Cardiac Cocks for a reason because we didn’t make it easy on ourselves there in the end, but we found a way to get it done.”

Cocke County (9-6, 3-5 District 2-AAA) entered the seventh inning with a 4-1 lead. Unable to extend it in the top half, it looked to put the finishing touches on the win in the bottom of the last.

Morristown East quickly put runners on, and got two across to make it a one score game with the tying run standing on third base.

The second of East’s runs scored on a sacrifice fly RBI after a ball that looked destined for grass found the glove of CCHS right fielder Zeke Cortez, who made a diving grab to hold the tying run at second, at the time.

“If he doesn’t catch that, the game is probably over,” Chrisman said. “What an unbelievable catch. But he comes in so upset at himself because he could’ve walked the ball into second base and doubled the runner. The runner thought there was no chance that ball was getting caught, and likely most right fielders don’t make that grab.”

With the tying run on third, the Hurricanes executed a bunt that forced CCHS senior Jacob King to make a play. In his first appearance behind the plate all season, King got the ball to first just in time to record the out and secure the win.

“They put pressure on us there, but there’s Jacob King. Your senior with a torn labrum and high ankle sprain making the play for the win,” Chrisman said. “He came to my office last night and said he didn’t care how much it hurt, that he wanted to be behind the plate today. To be honest, I didn’t want to put him there because I didn’t want to risk him.

“But, when your senior leader comes in and says to put it on them, and if it hurts, it hurts … That’s baseball, man. The game comes down to him making a throw with his injured arm, and he gets him by half a step. How poetic is that?”

Cocke County finished the game with six hits and three RBIs as a team.

Bryce Click, who picked up the win on the mound, had the most productive outing at the plate. He was 2-for-4 with an RBI. In his full seven innings of work on the rubber he surrendered just three hits as he struck out four en route to the win.

“Bryce did a phenomenal job and kept them off balance all day,” Chrisman said. “Didn’t give up a hit until the fourth or fifth inning. Then our defense did a great job playing behind him. Our guys did a great job coming and getting the baseball. Wasn’t always mechanically right, but they made the plays.”

Both teams were scoreless through the first two innings. Cocke County put the first runs on the board in the top half of the third, scoring all four of its runs for the afternoon in the frame.

Dylan Ellison, who’s been on a tear to start the year as the Fighting Cocks’ leading hitter, brought in the first run with an RBI double after Josh Ellis go on with a lead-off single.

Click tallied the next run on a 1-out RBI single. Cocke County’s third run came on a Morristown East error, but King brought in the final run of the frame on an RBI single to get David Stinnett across.

“It was big for our confidence, and to let (East) know we’re not the team they saw the day before,” Chrisman said. “I felt like they jumped out on us in the first game and it gave them confidence. We got the jump today and it gave us confidence. Getting that early lead was a big key, for sure.”

From there, the CCHS defense went to work. The group faced just one batter over the minimum through the third and fourth innings. East got a run on a sacrifice-fly RBI in the fifth, but left a run stranded in scoring position.

“We scored the same amount of runs as we did yesterday,” Chrisman said. “The difference was the pitching and the defense. I think the turnaround we had says a lot about our club. These guys can play, and they know they can. We just got into a slump the last few games. They got back to what we were doing the first two weeks.”

Click and the CCHS defense retired the side in order in the sixth, setting up the final inning were the ‘Canes needed three runs to extend the game, but came up one shy.

With the win, Cocke County is 3-1 against both Morristown programs for the 2021 season, which is a program-best showing against the Hamblen County teams under Chrisman’s leadership.

“We have a lot of respect for both clubs down here,” Chrisman said. “I believe in our guys, so I don’t want to say it’s tough to believe, but it’s really hard to do. It’s tough to come over here and win, and we’ve done it twice now. We’re going to enjoy it, because it’s not something you do often.”