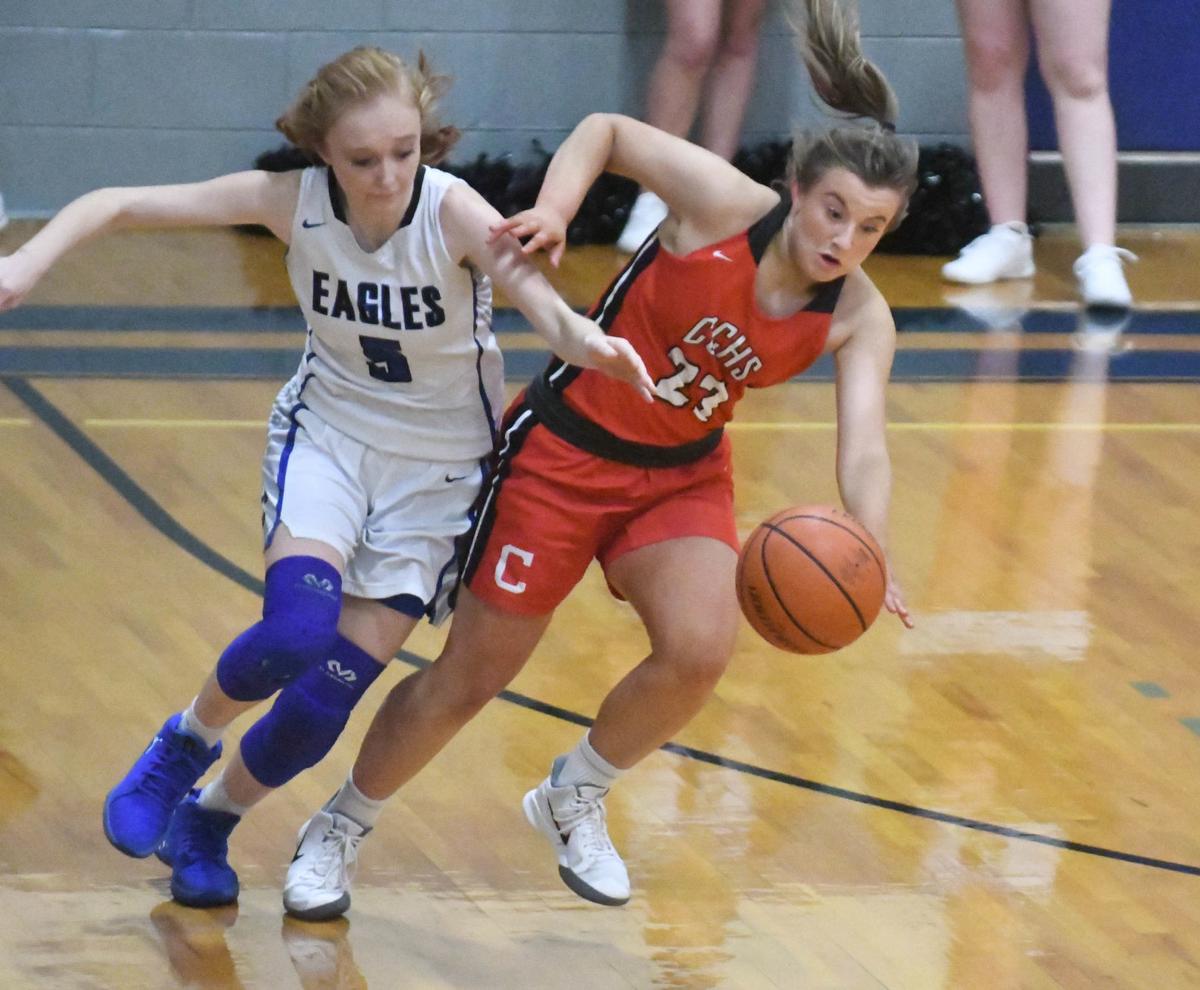 Cocke County’s Sydney Clevenger (left) is trapped on the sideline by Cosby’s Bralyn McGaha (right) and Leia Groat on Tuesday. 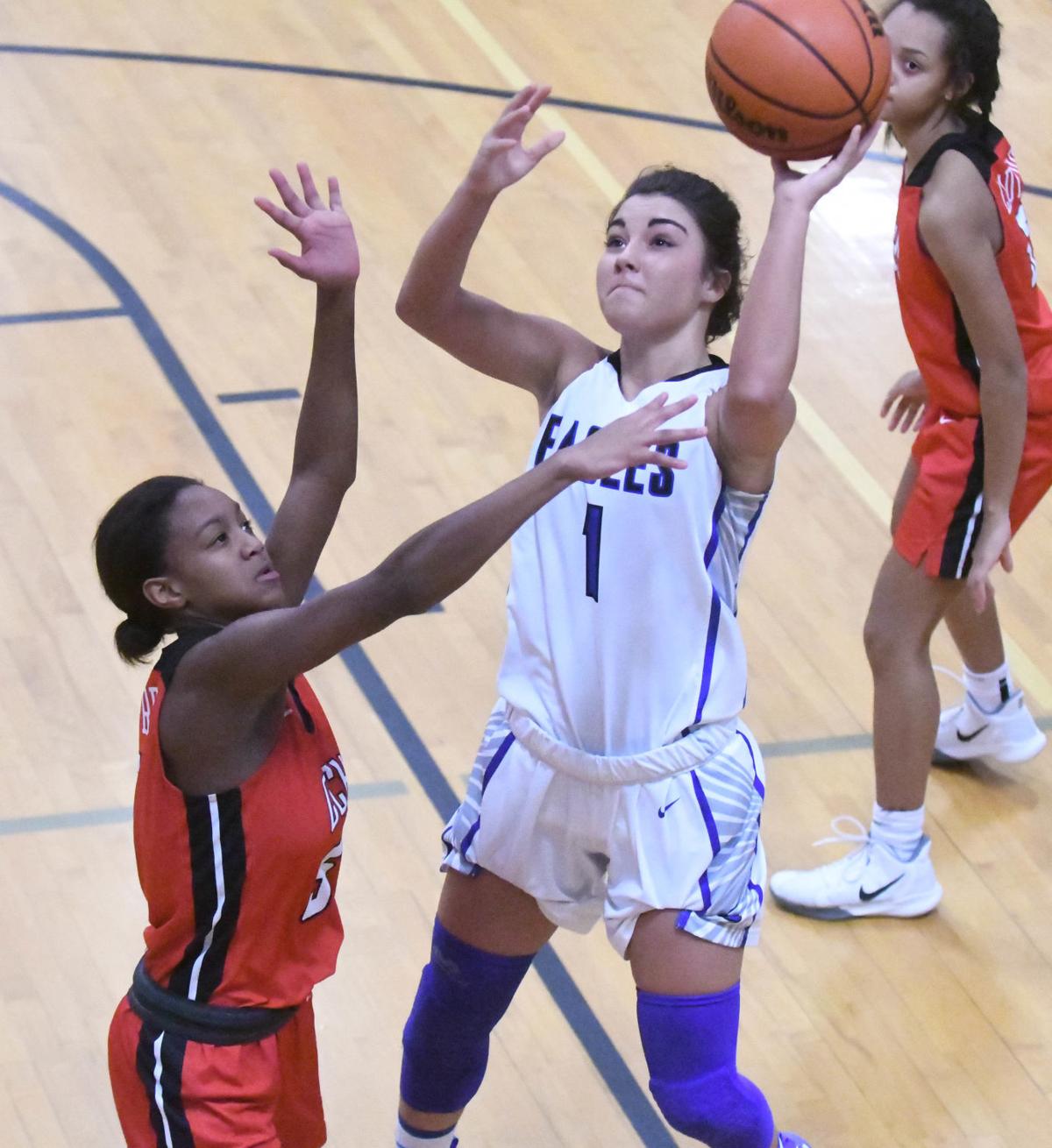 Cocke County’s Sydney Clevenger (left) is trapped on the sideline by Cosby’s Bralyn McGaha (right) and Leia Groat on Tuesday.

COSBY—It takes true grit and perseverance to win the type of game the Cosby High Lady Eagles were able to pull out on Tuesday.

“We’ve been playing better the past few weeks,” Lowe said. “That’s the beautiful thing about this sport, though. It’s a tournament sport, and now would be the perfect time for us to get hot.”

The Lady Eagles took on nearly every form of adversity you could imagine in Tuesday night’s tussle with inter-county rival Cocke County. They had multiple starters foul out, had to rely on their bench to finish game all in order to grind out a win in a game they had controlled for most of the night.

In the end, all of their efforts culminated to getting a victory over a program that’s had their number since the rivalry was reborn in 2016. And although it won’t directly help their postseason push, it was still one of the sweetest wins the Lady Eagles have tasted in recent memory.

“It’s such a great feeling,” Cosby junior guard Bralyn McGaha added. “I don’t know that I’ll be able to sleep tonight, I’m so happy. This feels so amazing.”

The Lady Eagles struggled mightily on the offensive end, and couldn’t contain a white hot Lady Red shooting barrage that buried 3-pointer after 3-pointer to pull away for a lopsided victory.

That’s been the difference in the Lady Eagles over the last month, though. They’ve been able to right the ship and get their season turned around after going through some dreadful spurts in the first half of the year. Now that they’re playing with more confidence, they’re able to grind out wins like the one on Tuesday night.

“I feel like we’ve been playing a lot better since the Pigeon Forge game,” Lowe said. “I know our record doesn’t look the best, but when you look at who we’ve played it puts it into perspective.

“If we were an NCAA team I wouldn’t say we’ve had any bad losses. We haven’t lost to anyone we were supposed to beat and we’re undefeated in our league.”

Case and point, it was Cosby that got hot from long range in the rematch. The Lady Eagles connected on their first five shots from behind the arc, and atoned for seven makes from 3-point range throughout the night.

While each shot was huge in a game that came down to the wire, Leia Groat’s play in the fourth may have been the difference maker.

As one of several Lady Eagles that found herself in foul trouble throughout the night, she had to go through the ebbs and flows of the night from having to sit out several minutes at a time, to jumping back into a tight contest to help lead her team to victory.

Lead she did, though, scoring nine points in the fourth quarter en route to a team-leading 14-point performance at the end of the night.

“Tonight was a real challenge,” Groat said. “Our bench stepped up in a huge way, though. When we faced adversity early with foul trouble we knew it was going to be a rough go down the stretch, but I’m so proud of how our team pulled through.”

Cosby went cold from deep after the first half, not hitting a single 3 the entire third quarter. It was Groat that snapped that cold streak in the fourth to help keep the Lady Eagles ahead while their lead was dwindling, but her biggest 3-point play came in the paint.

With Cosby’s lead getting drained down to a single point in the waining moments, Groat turned a then three-point lead into six with a major and-1 bucket in transition that helped put the game away. After sinking the free-throw, it was clear that for the first time since the rivalry had been reborn, the Lady Eagles were going to emerge victorious.

“Beating your cross-county rival just brings a different fire in you,” Groat said. “Not beating them up until this point, you hear constantly about how they’re just better than you. When you finally beat them it just brings out relief, but an excitement and new confidence in yourself.”

When the season started, expectations were high for the Lady Eagles after all they had accomplished in Lowe’s first two seasons as head coach. While those expectations may have teetered some as the season’s gone along, it’s performances like the one on Tuesday night that will still make Cosby a serious threat once the postseason begins.

After all, that’s when championships are won anyway. And it’s more hardware that the program is after in 2020.