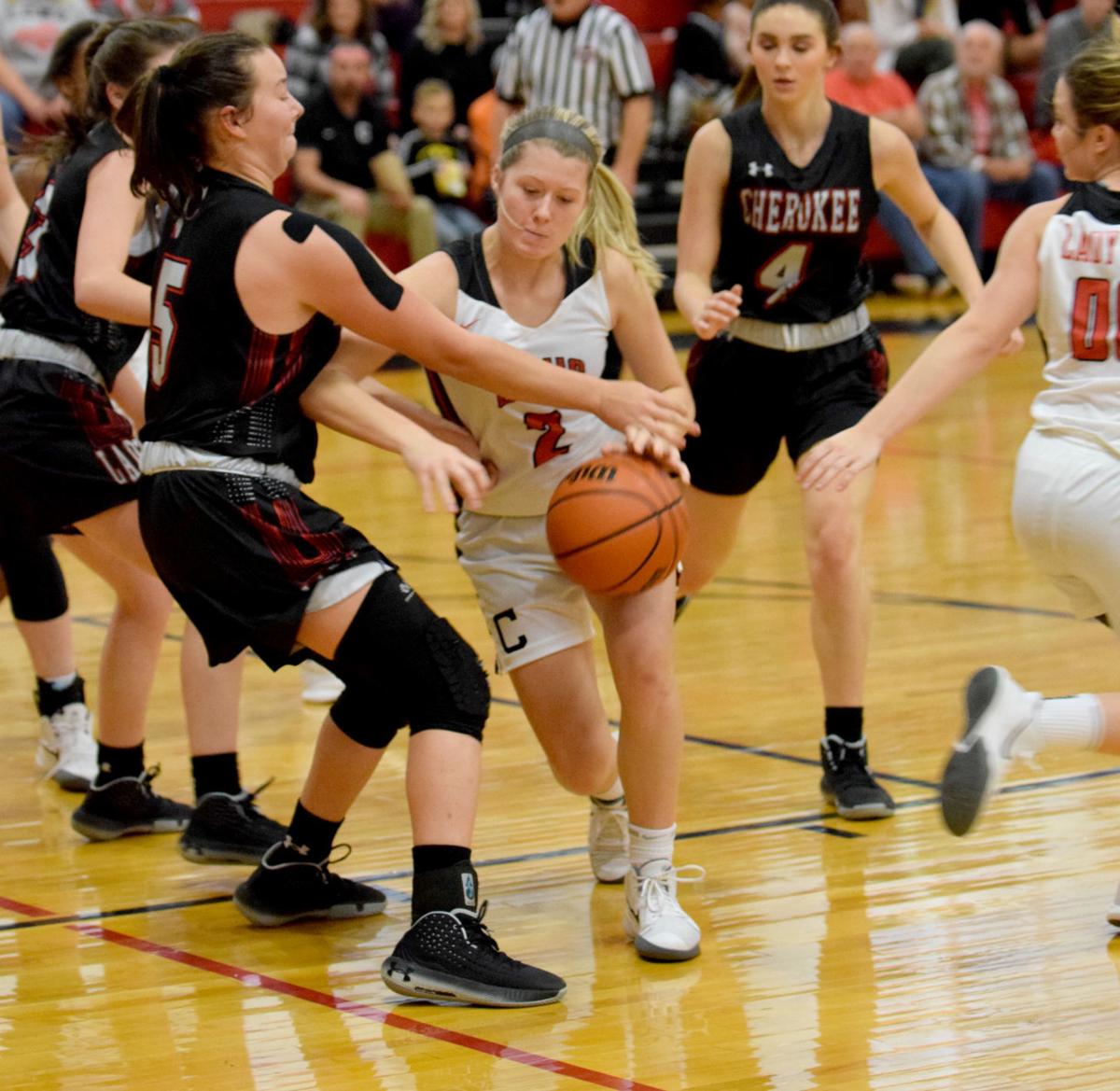 Cocke County’s Gracie Gregg drives through the lane in Monday’s win over Cherokee. Gregg scored 10 points to notch a double-double in the victory. 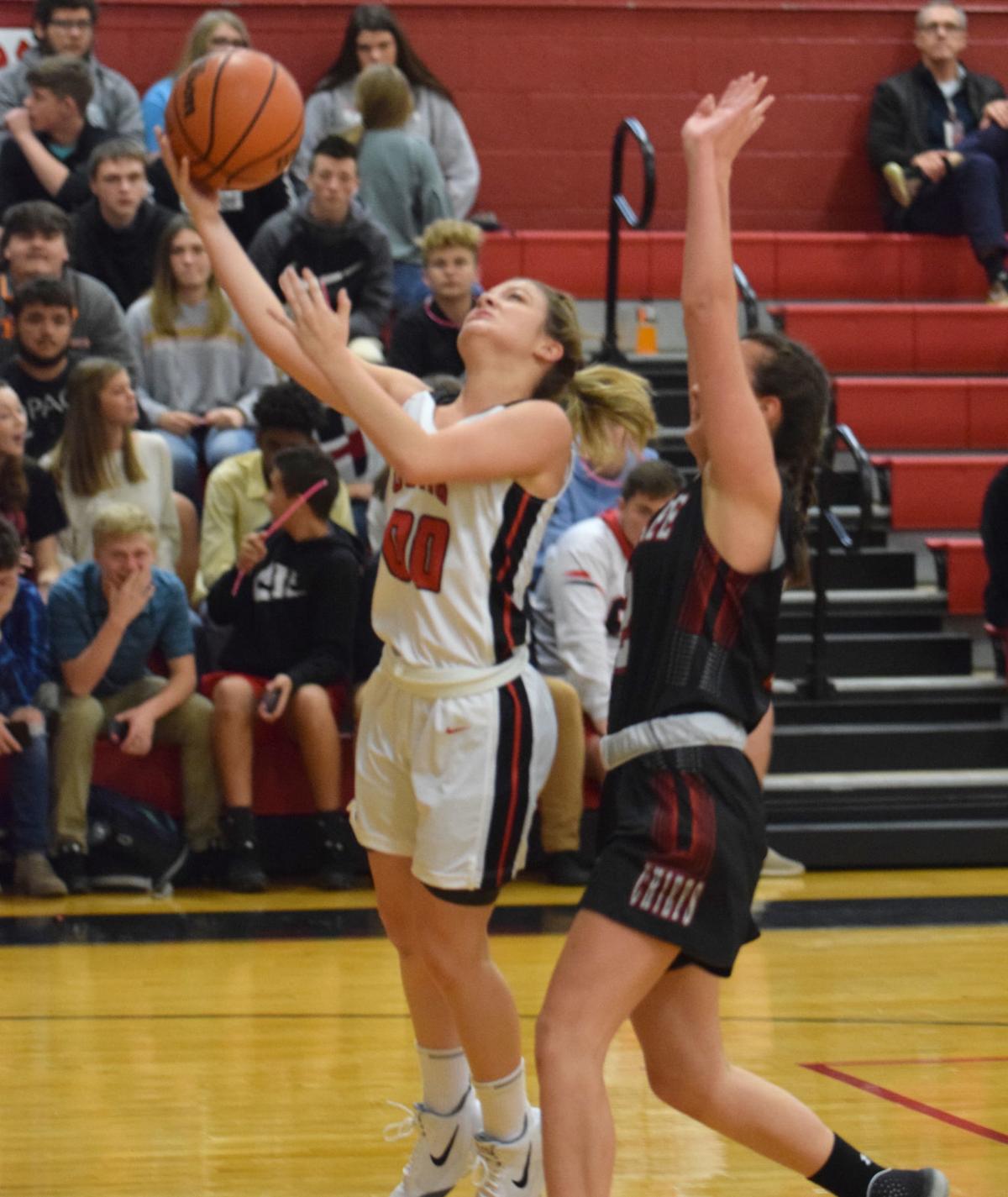 Lady Red sophomore Sydney Clevenger gets to the basket in Monday’s win over Cherokee. 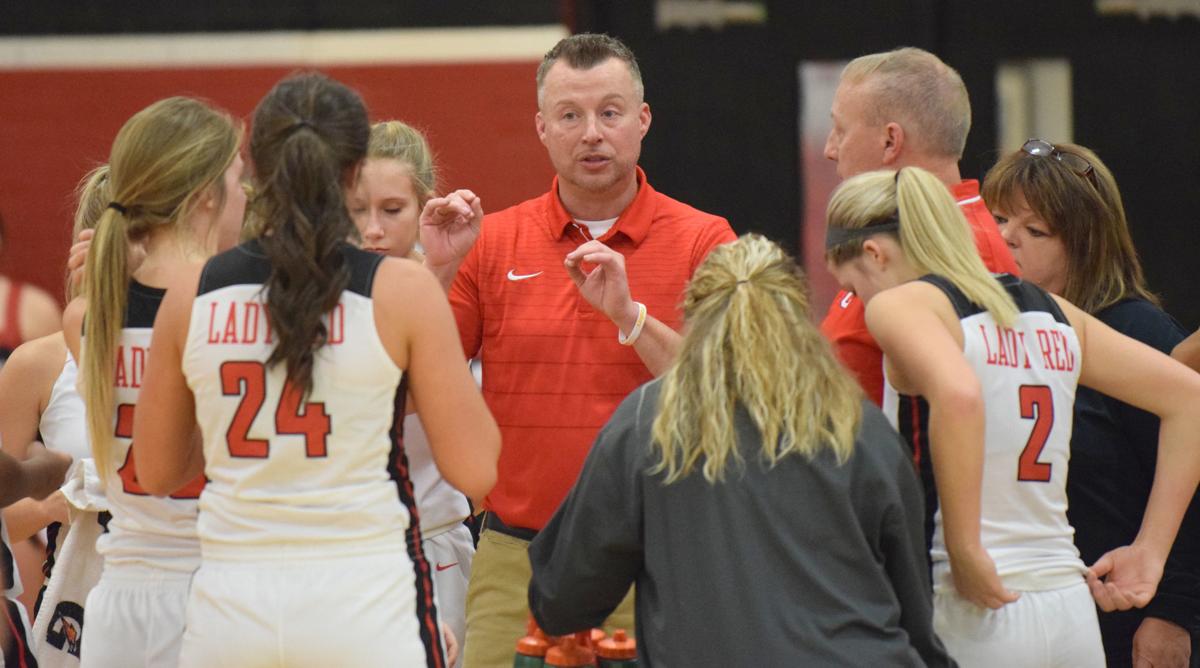 Lady Red coach Jeremy Byrd talks over strategy during a timeout in Monday’s win over Cherokee. Byrd notched his 100th career win last week and tallied win No. 101 in the victory over Cherokee.

Cocke County’s Gracie Gregg drives through the lane in Monday’s win over Cherokee. Gregg scored 10 points to notch a double-double in the victory.

Lady Red sophomore Sydney Clevenger gets to the basket in Monday’s win over Cherokee.

Lady Red coach Jeremy Byrd talks over strategy during a timeout in Monday’s win over Cherokee. Byrd notched his 100th career win last week and tallied win No. 101 in the victory over Cherokee.

NEWPORT—Even if Gracie Gregg doesn’t score a single point, don’t expect her to leave the court.

Her rebounding ability and basketball IQ make her an asset to Cocke County regardless.

She scored 10 and easily surpassed 10 rebounds on the night, collecting her first double-double of the season as the Lady Red dismantled former District 2-AAA rival Cherokee 47-25 in Newport on Monday night.

Although Cocke County (2-1) never trailed, a scoring drought kept the game close in the third quarter.

That is, until Gregg gave CCHS a much-needed spark on her basket with 4:25 in the frame. Gregg later converted a steal into another layup before her pull-up jumper from the foul line gave the Lady Red a 40-18 lead in the fourth quarter.

And the same pressure defense which kept Knoxville Ambassadors off the scoreboard in the fourth quarter showed up once more after Cherokee (1-2) pulled within seven points in the third quarter. From there, Cocke County responded with a 20-2 run and didn’t allow another field goal until 1:21 remained in the game. Other than a baseline jumper and a 3-pointer by Kodi Henson between then and the final horn, the Lady Red didn’t allow any other field goals in the final 14:08 of the game.

Heavan Baxter led the way for Cocke County in the scorebook, finishing with 11 points which included the Lady Red’s first bucket of the fourth quarter.

“She’s worked really hard for four years and she’s earned the right to get some opportunities in there,” Byrd said of Baxter. “She and Hailey played really well tonight. It’s not going to show up on the box scores, the things they were doing beating and banging in there and being a presence on defense as far as contesting shots. Those posts have got to do that. They run baseline to baseline down the court every time, they have to be in extremely good condition to be successful.”

Cherokee gained momentum before halftime, falling behind 22-6 before closing the deficit to 24-14 at the break. Macy McDavid buried a 3-pointer and Destiny Jarnigan finished an and-one to cut the margin to eight.

“I feel like we just really pushed the tempo and we all as a team encouraged each other and I feel like that has a lot to do with it,” Harden said. “I don’t really go out that much but I don’t take it personal because I like to take into consideration the bench, getting them fired up. When the bench is fired up, it gets the girls fired up and we’re all just working together.”

Baskets by Gregg and Jaylen Cofield sparked Cocke County’s final run, and Camryn Halcomb hit from 3-point range in the final seconds as the Lady Red took a 36-18 lead into the final quarter.

After busting a 3-pointer to break the scoreless tie 2:12 after the opening tip, Clevenger helped Cocke County open a sizable lead by scoring a fast-break layup and then assisting Gregg on another. Cofield then capped Cocke County’s opening stanza explosion with a pair of foul shots as the Lady Red took a 15-3 lead to the second period, where Paige Niethammer and Camryn Halcomb both hit layups as CCHS led 21-5.

Baxter and Gregg both turned steals into transition layups for a quick 7-0 lead, and Baxter later put back a miss through contact before adding another offensive board and second-chance layup in the second quarter.

“At halftime I told them I don’t care if you pressure the ball full court or not after you miss a shot but you can’t foul 90 feet from the basket. Don’t use your hands, use your feet. They did listen to that and I’ll give them credit for that,” Byrd noted.

McDavid led the Lady Chiefs with 7 points with Jarnigan and Henson both adding 6.